Bangkok, city on the move.

Most of the time. Occasionally there are traffic issues, usually from about 4:00am in the morning until 5:30am the next day. At other times, it is slow but steady.

So how do the Thais get around? By any means necessary and often the most unsafe available. In order of decreasing safety, here are your options:

BTS & MRT: the BTS “Sky Train” is an elevated light rail, the MRT an underground light rail. Both clean, cheap, and reliable. As a tourist, don’t expect there to be stops near the places you’ll want to go. 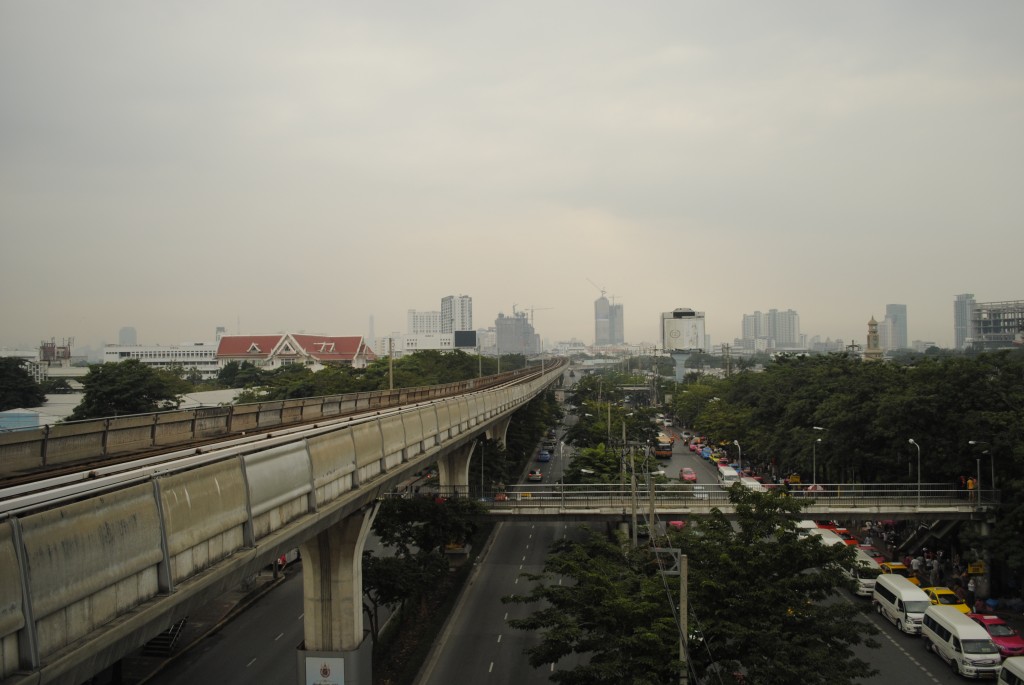 Metered cab: these worked out fine for us from and to the airports. Just make sure they turn the meter on before they start driving. If not, your mileage may vary. 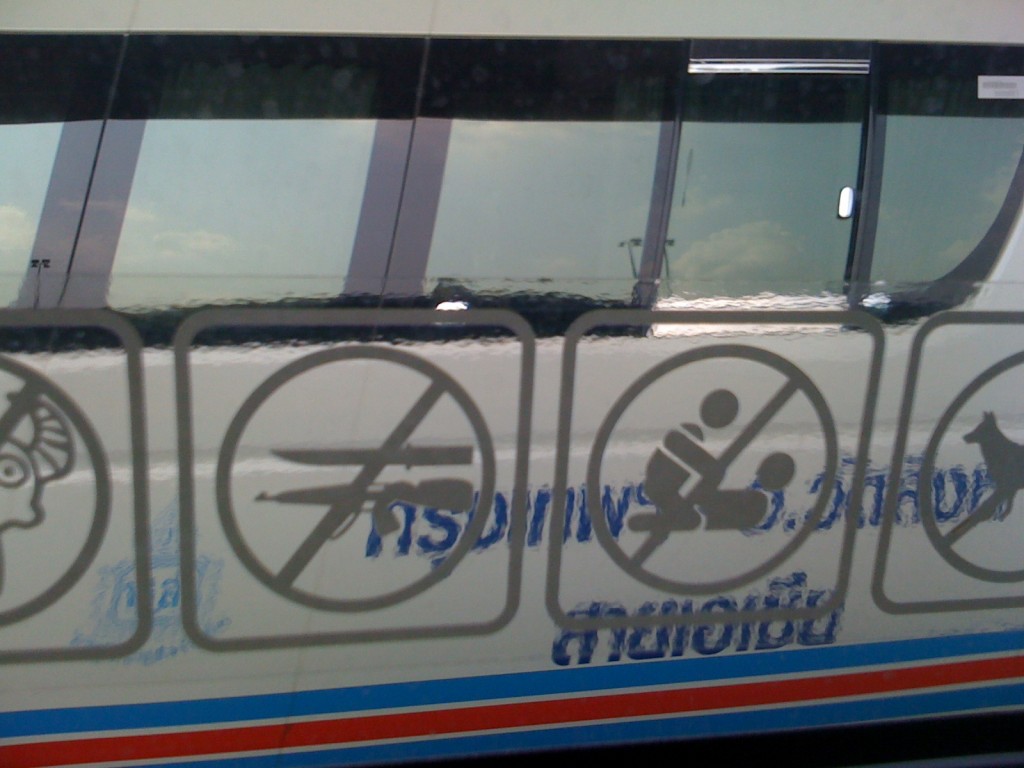 Tuk-tuk: riding lawn mower body with supped up engine, back bench for passengers, and a colorful roof. Did you know it was safe to take these on a highway? No? Me neither but they do and it’s a surprisingly smooth ride. Although I think the passing of cars was just showing off. 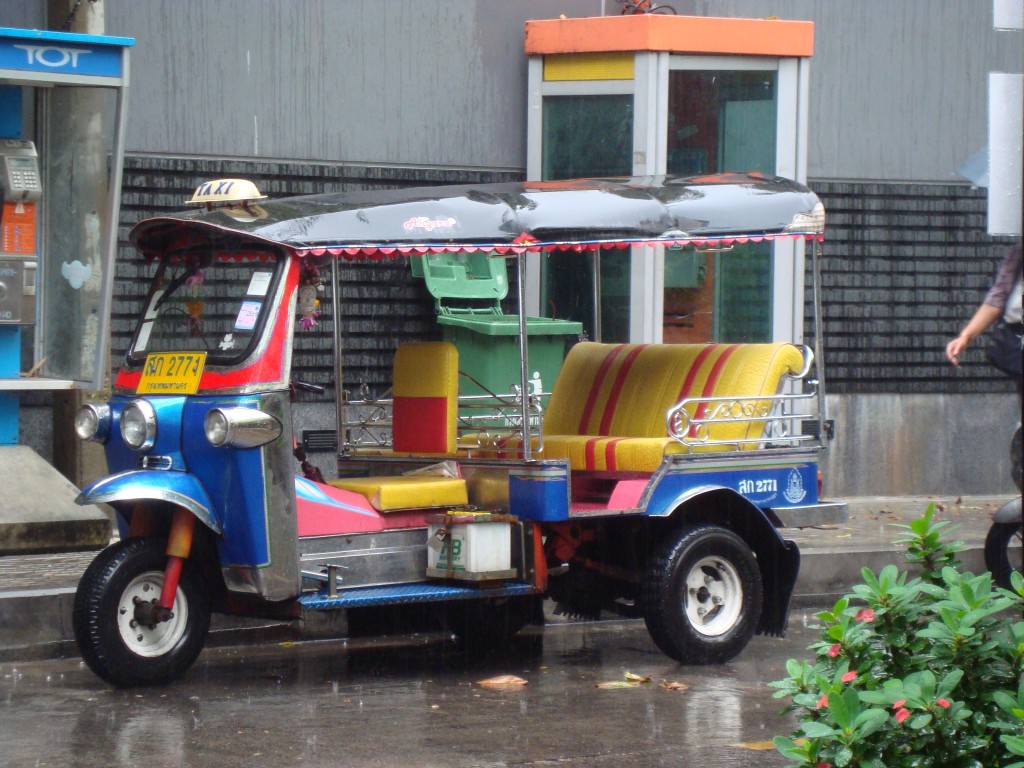 Khlong boat: skinny, long, needle-like boats with Mack truck engines strapped on the back. You can get a ride on one of these for about $1. Thanks to a helpful tuk-tuk driver who took us to a pier in the middle of nowhere, we opted to pay $20. Never let the driver suggest where you should go. The drive will be cheap, the destination something different. 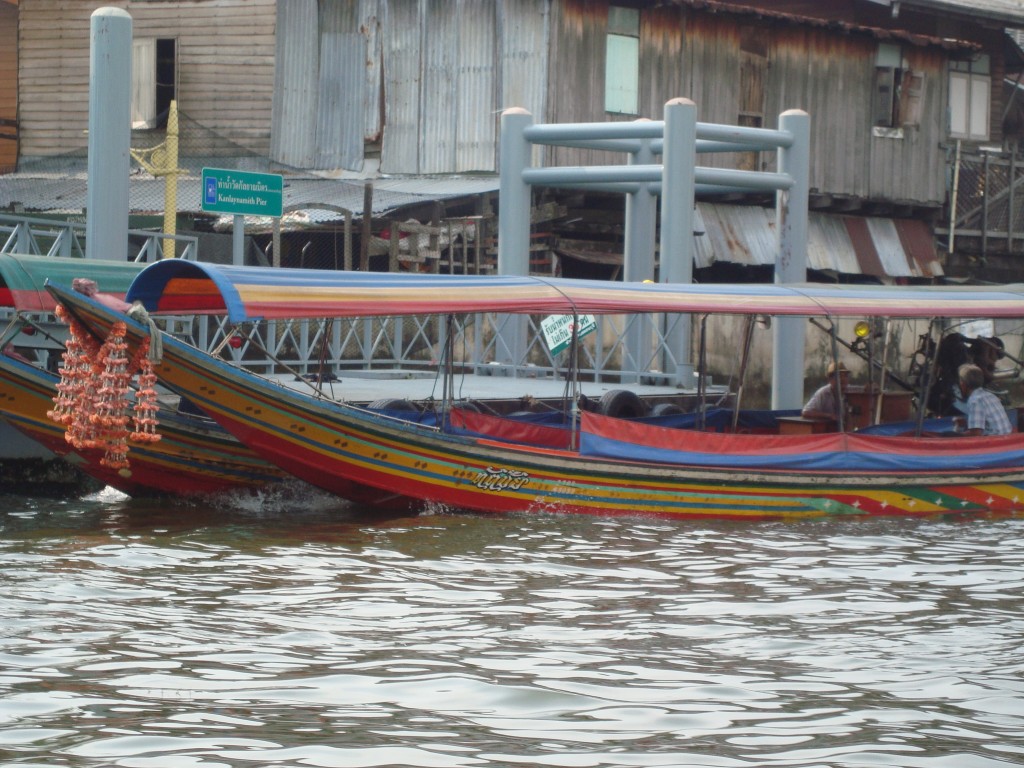 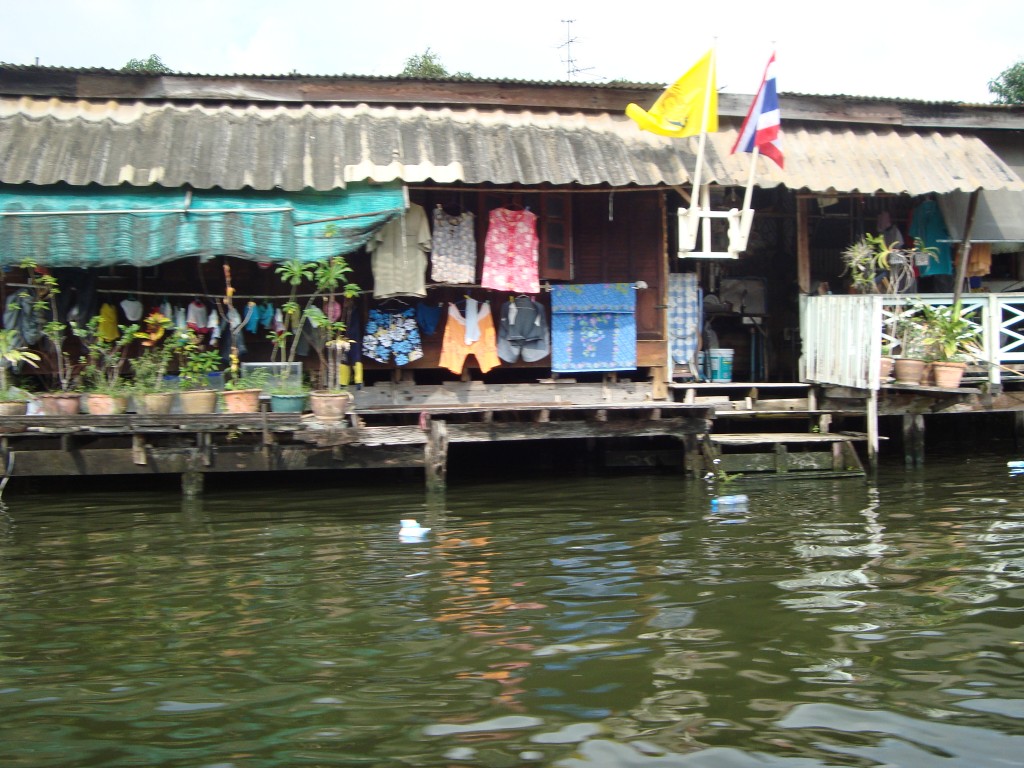 View of the houses along the canal during Khlong boat trip, Bangkok

Motorcycle taxi: this is pretty much what it sounds like, a death wish. On the plus side, if the traffic is really bad they have no problem driving on the sidewalk. This also makes walking on the sidewalk adventurous. 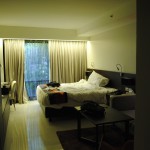 For our first few nights in country, we choose a quiet business hotel, Oakwood Suites. A small studio with kitchenette and rooftop pool. At the very high end of our budget range, we felt a few nights of assured sleep was a priority to overcome the 12 hour time shift. Located in the expat neighborhood of Sukhumvit and at the crossroads of MRT and BTS lines, this was the perfect setup to see a bit of Bangkok, while also getting the rest we needed. (It would be over a week before both of us stopped waking up at 3am, no matter what time we went to sleep or how much beer I mixed with Ambien.) 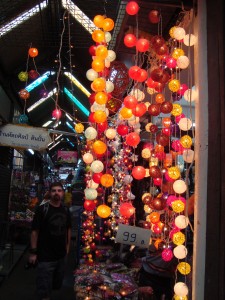 On our first full day we took the BTS to the Chatuchak weekend market, a 27 acre maze of over 2,000 covered stalls, with vendors selling clothes, furniture, lights, silverware, fake fruit…anything you could imagine and more being sold to the 200,000 shoppers who come here on any given weekend. Impressive and easy to get lost in; which is part of the reason to go. It was well worth the price of admission (free) and if we’re back in Bangkok the weekend before we leave, this is most likely where your trinket will come from. 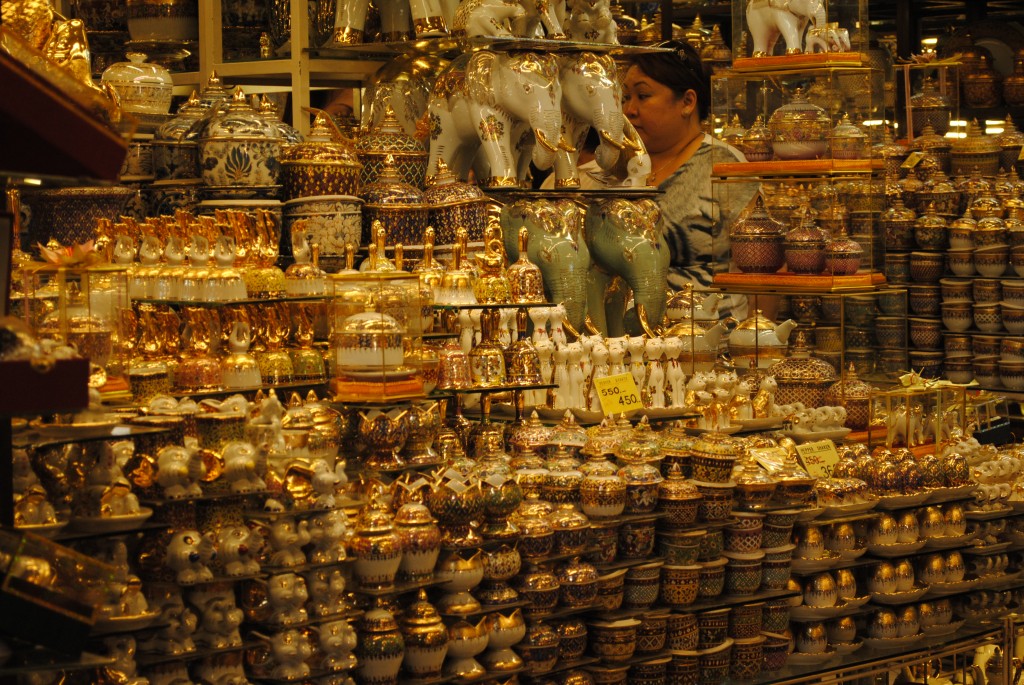 Other than that we took a couple of tuk-tuk rides, a river boat cruise, ate street food at a night market, got scammed once (see khlong boat above), maybe twice, toured a wat (temple), did laundry and spent a lot of time in the rooftop pool as we rested and planned our next stop, Koh Samui and island hopping in the Gulf of Thialand. 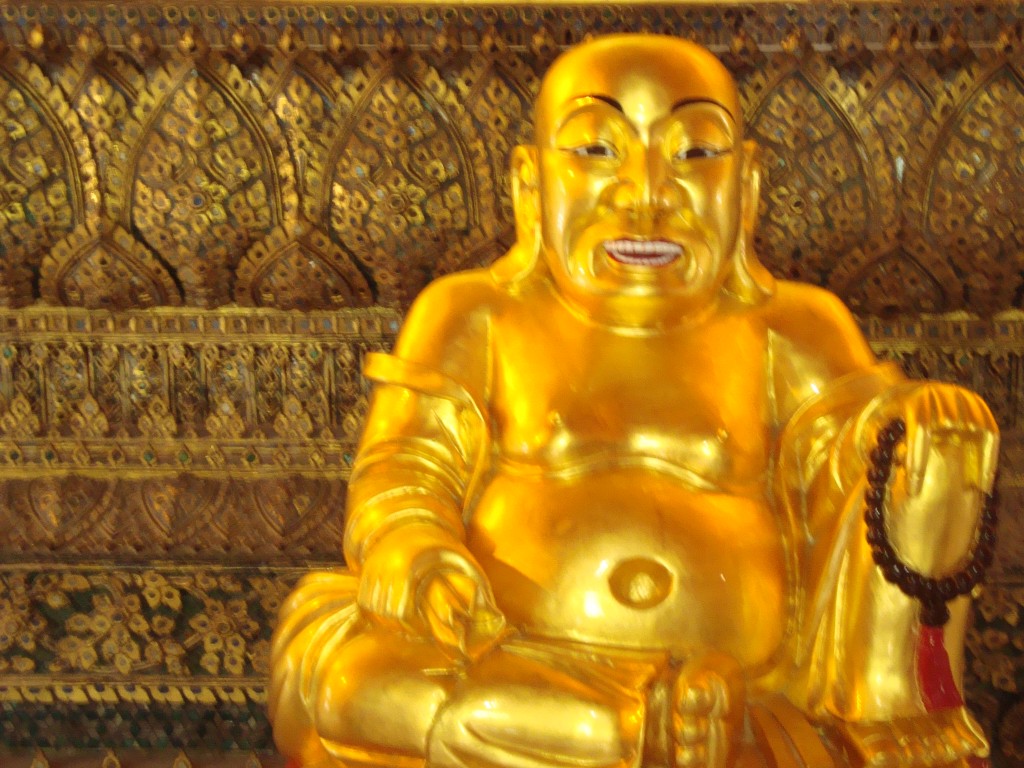 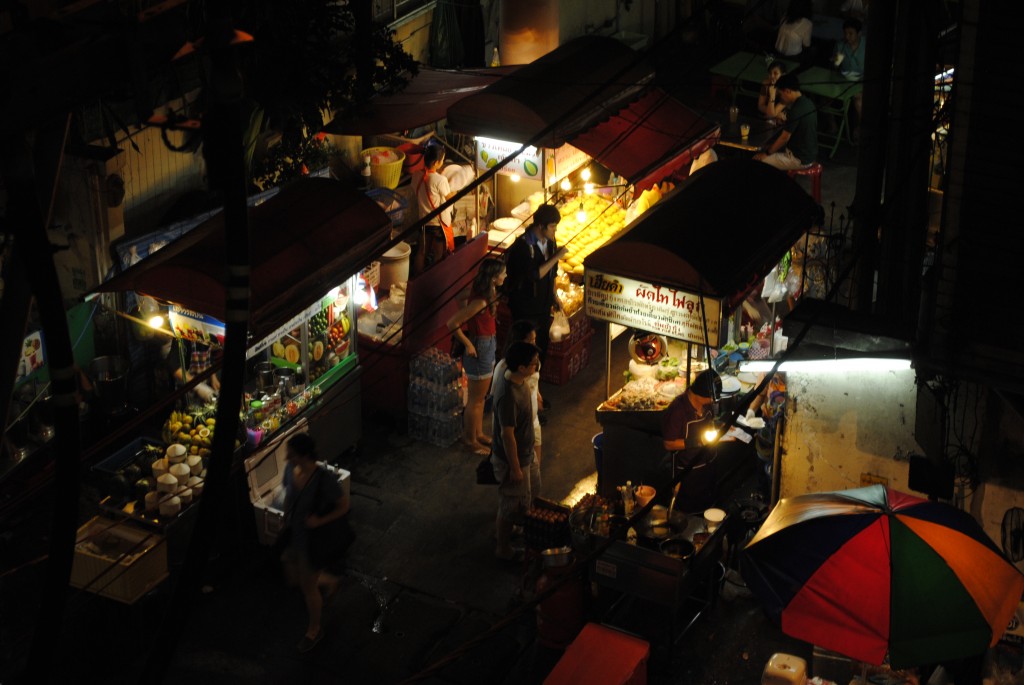 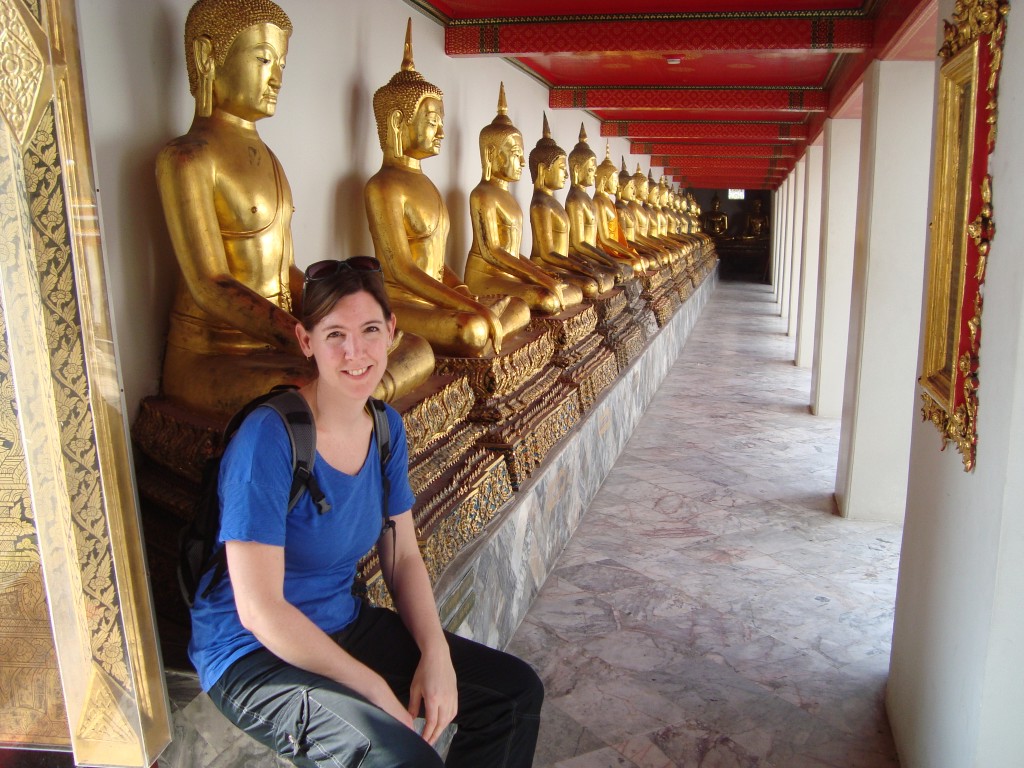 Bangkok is a big city and we were happy to see a little portion of it but I don’t think we would ever have enough time to get to know it.

5 thoughts on “Four Nights in Bangkok…”