Stalls selling bottles of gasoline dot the roads around Koh Pha Gnan (the ‘P’ is silent, the ‘G’ might be). There are no gas stations and there are thousands of motor scooters. Every roadside hut and lean-to either rents scooters or sells pale yellow gasoline in repurposed liquor bottles. Imagine the abundance of Starbucks in your average US city. Then double that and imagine the coffee is flammable. 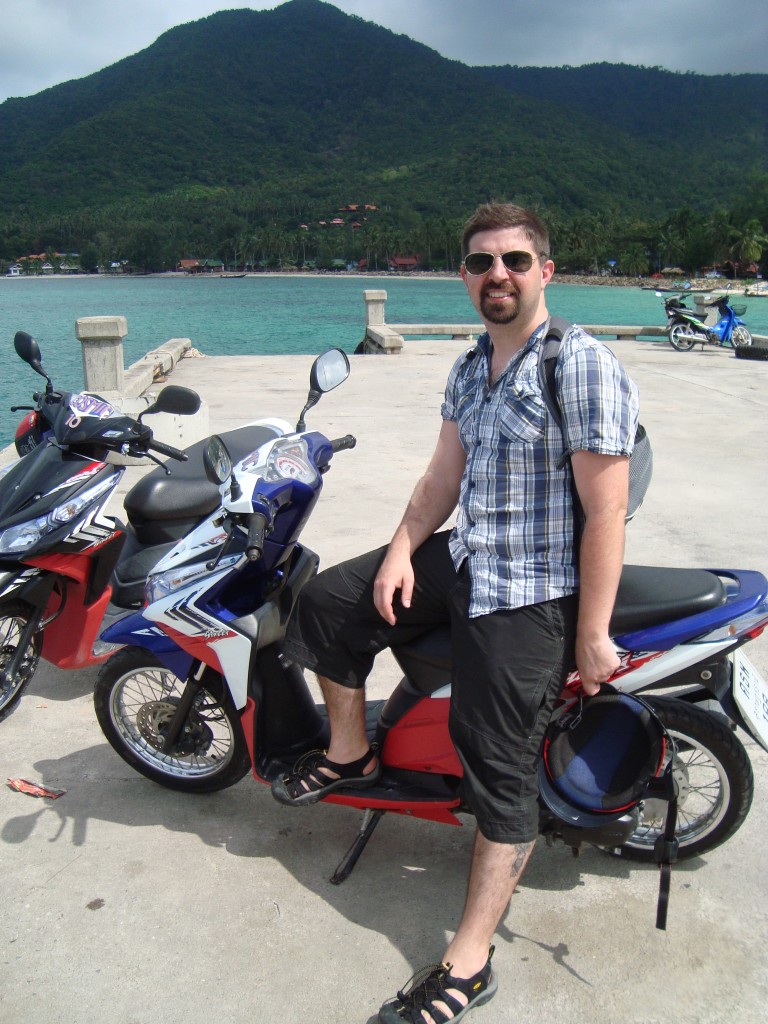 The ratio of bikes to tourists is at least 2:1 but the ratio of helmets to riders is more like 1:4. Those without helmets look cooler than those with but the people who look the most ridiculous are those with one side of their body covered in cheap gauze and road rash. During our few days on the islands, we had seen enough of these sad creatures to realize that accidents were more a question of when, not if, so we opted for the helmets. I went a step further and attached a GoPro to mine, so with helmet and camera I looked like the Urkel of the Koh Pha Gnan scooter crowd.

We rented scooters twice on Koh Pha Gnan, fairly cheap at 200 baht a day (about $6). The island is made up of steep hills and ridgelines, so every stretch of road is a series of sharp, high parabolas, with beautiful vistas of sea and beach on one side, and quick, rocky drops into lush tropical jungle on the other. 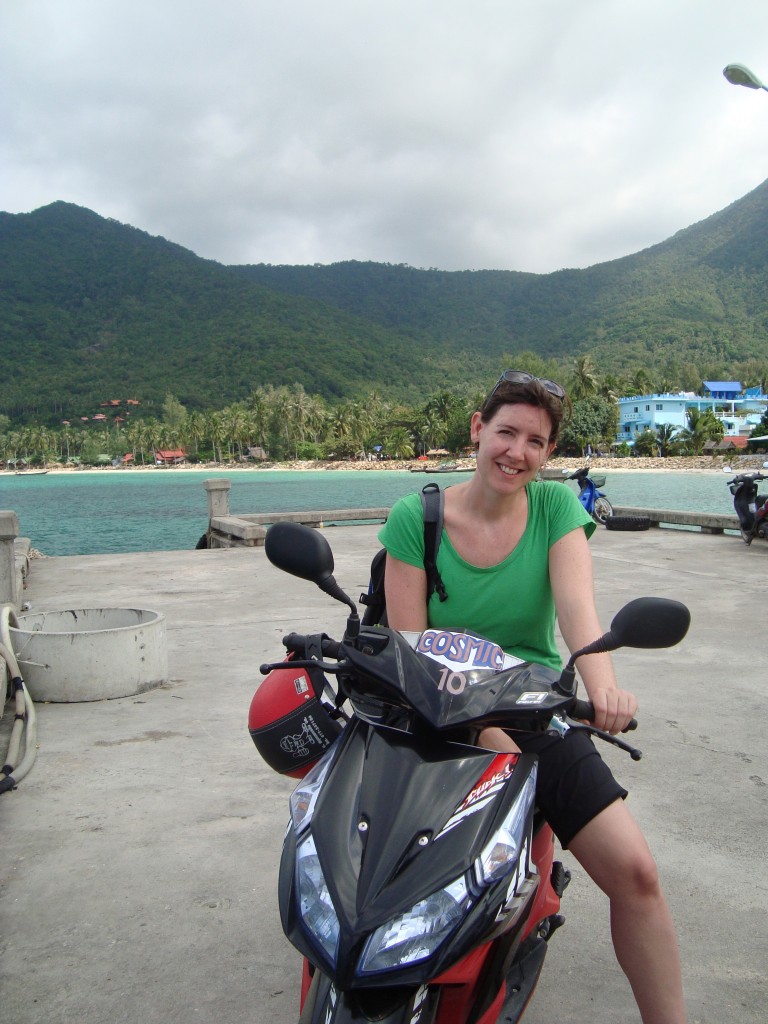 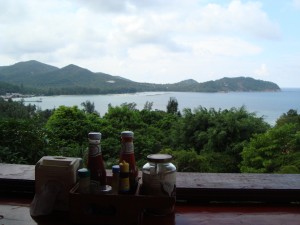 View of fisherman’s village and cove below

On our first day we headed north up the west side of the island and across the top until the road came to an end. Koh Pha Gnan is circled by a ring road but it doesn’t make it all the way around and some parts of the island are only accessible by 4×4, foot, or, for the even more remote, water taxi. A beautiful ride during the hot part of the day, we stopped for lunch at a restaurant perched at the top of one of the steeper hills. Dark mahogany wood and shade, it provided a much-needed escape from the sun and a great view of the small fisherman’s village below. 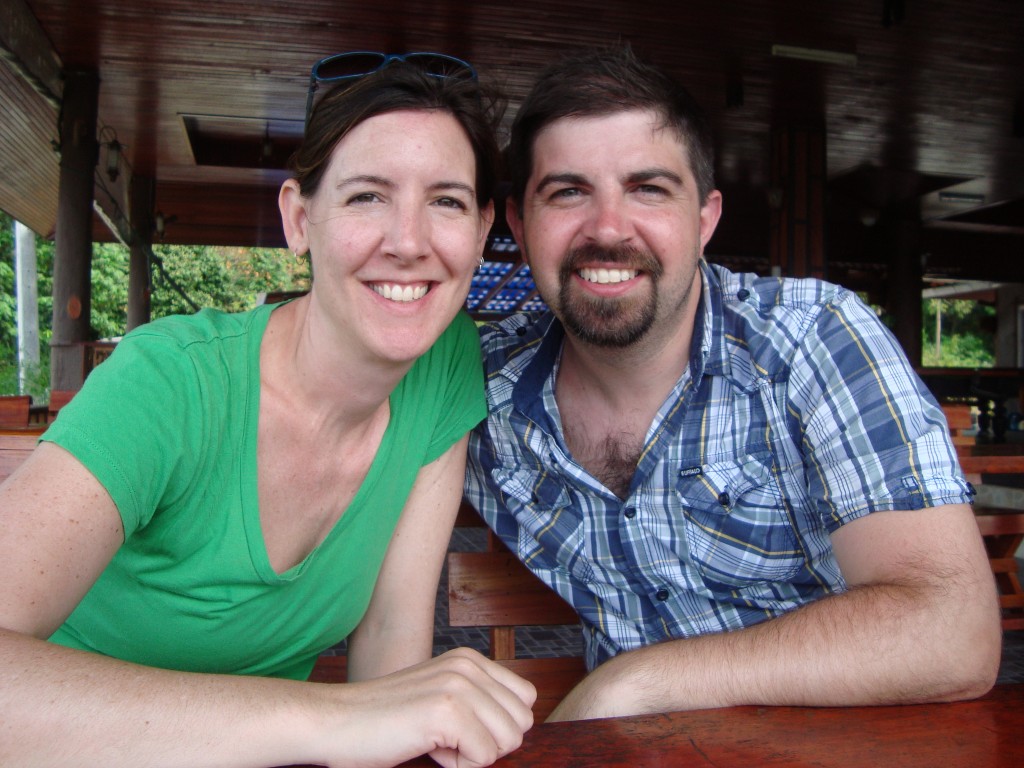 A quick consultation with the map – thankfully not in Russian – and we were off to the islet Ko Ma, a small outcropping of rock, trees and an abandoned set of bungalows, attached to land by a 3 meter wide, 100 meter long stretch of sandbar. Beautiful but the damage done by too many tourists was easy to see, with plastic water bottles and other detritus almost everywhere we looked. With the wind gusting stronger and storm clouds moving in, we finished our waters, tossed the plastic bottles on the ground, and headed for our bikes. 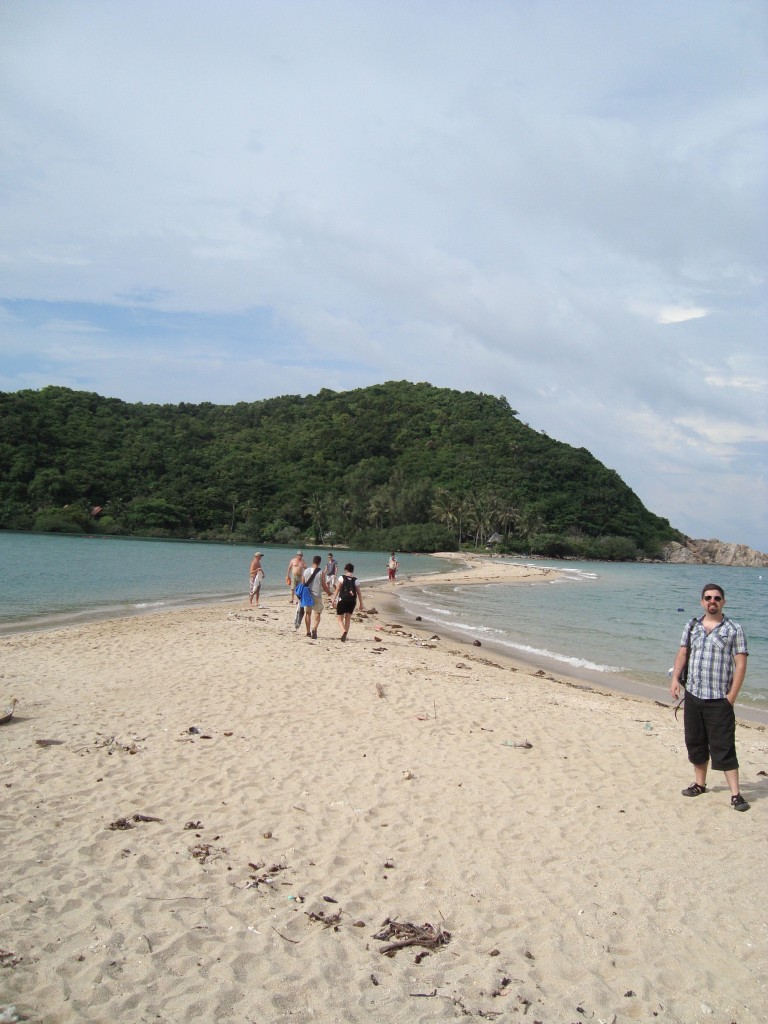 John with Ko Ma in background

We made the main road before the storm clouds caught us. To borrow a phrase from a great American poet, the cement road would be “slippery when wet” but the rutted dirt road from the beach with it’s seventy-degree slope would have been impassable just a few minutes into the storm. Attempts were made to stay conservative in the rain but you can only let so many 11 year-olds riding three to a scooter pass you, so with the water soaking deeper into our clothes and day bags, we sped back to our hotel with the hope for some late afternoon beach time.

Our second day out took us to Haad Rin beach, of the infamous Full Moon Parties. Incredibly, the roads were steeper and the peaks higher. Which made it all the more fun. We made Haad Rin in about two hours, with an hour and fifteen minute shopping trip in the middle. The beach itself was impressive, the widest we had seen in Thailand – necessary to accommodate the regular crowd of partiers that number near ten thousand every full moon. A week earlier, on Koh Samui, a 45 minute ferry ride away, we had been able to hear the bass of the last party, from early evening to late morning. It had rained like a bastard that night and during breakfast I raised a glass of coffee towards the horizon in respect to the partiers’ stamina. But we only stayed at Haad Rin long enough for a few sips of water and a quick duck into a few of the clothing stores. Then a quick check of our breaks, yup still quite spongy, and back on the bikes to race back home and catch a late afternoon swim and sunset watching. 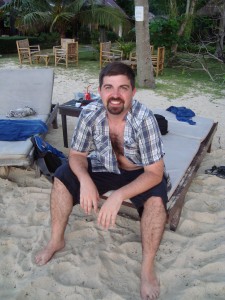 We thoroughly enjoyed our time our Koh Pha Gnan and would think fondly back to it during our time inland as we explored the north. But now it was onto Koh Tao, an even more remote island and a slip further back in time, to a more undiscovered Thailand. 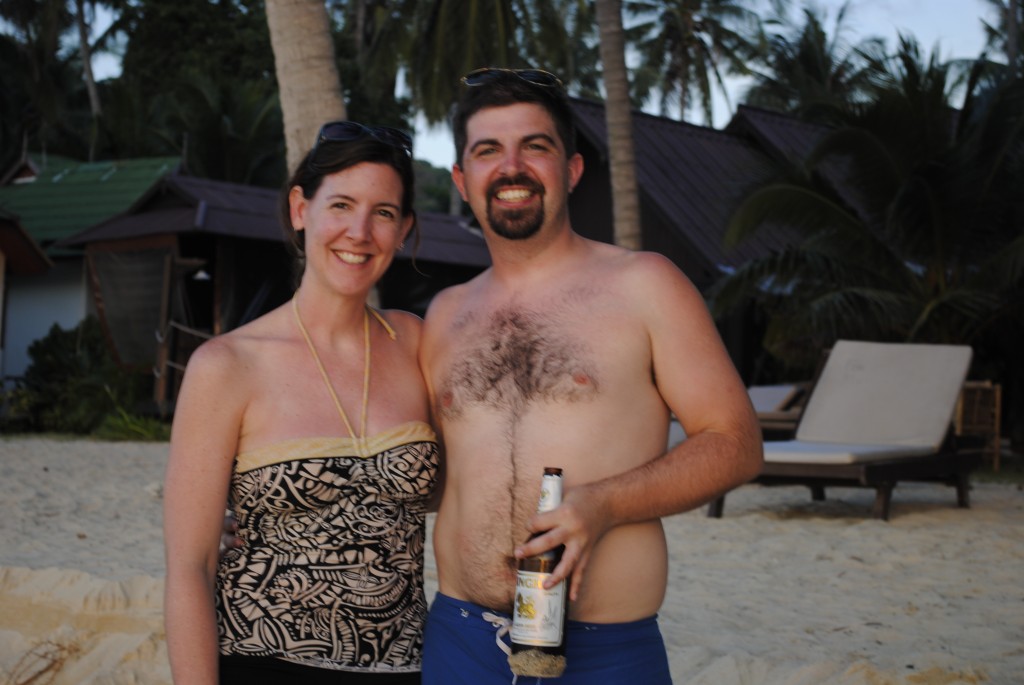 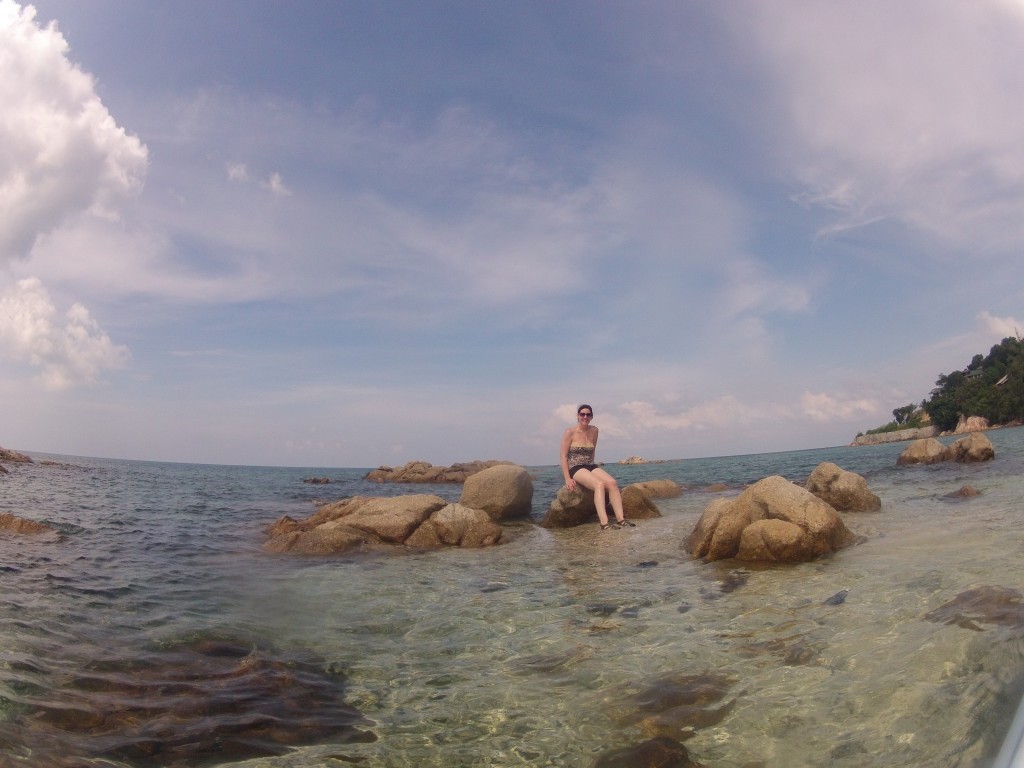 A bit off shore we found a small set of rocks to take a break from kayaking.

One thought on “Riding Scooters on Koh Pha Gnan”