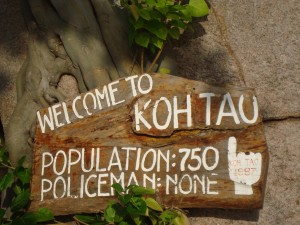 Ko Tao was the smallest of the three Gulf Islands we visited.

The final island on our three stop tour of the Gulf of Thailand was Koh Tao. It is known as a scuba diving haven and is smaller than the other two we visited. It is also a little harder to get to, and supposedly the most laid back and least developed. Unfortunately we were visiting during peak season and had a hard time finding a hotel. We settled on one that seemed like it might be interesting; it was pretty rustic (bamboo bungalows, outdoor bathroom, no hot water or AC) and we were ready to try to rough it a bit. Further, the place was on the cliffs, so it didn’t have a beach, and we figured that was what made it affordable for us. We had no idea what we were in for when we arrived at Moondance Magic Resort, but just riding there from the ferry stop was an adventure. 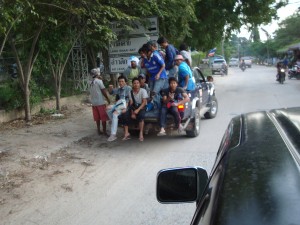 Ko Tao Songathew for the locals

It was our scariest ‘songathew’ ride yet (riding on a bench in the back of a pick-up truck). Though luckily there were only four of us plus all our luggage, as compared to how tight the ride can be for a non-tourist.

The ride into the resort was like a roller coaster. Only it felt less safe. The ruts in the dirt road were so deep, and the 4-wheel drive truck having such a hard time climbing in and out of them, that we would slowly creep up a hill and then slam down to the bottom, with everything in the bed of the truck following suit. The bench in the back of the truck bed that we sat on would slam into the cab, or the tailgate, alternatively, in a way that would easily have taken off a finger, if it was positioned in the wrong spot. We learned very quickly not to put any body parts at either end of the bench. So, it was a pretty intense experience just getting to our place and we definitely bonded with our fellow passengers (and soon-to-be neighbors and fast friends), Steffie and Marco, on that first ride. 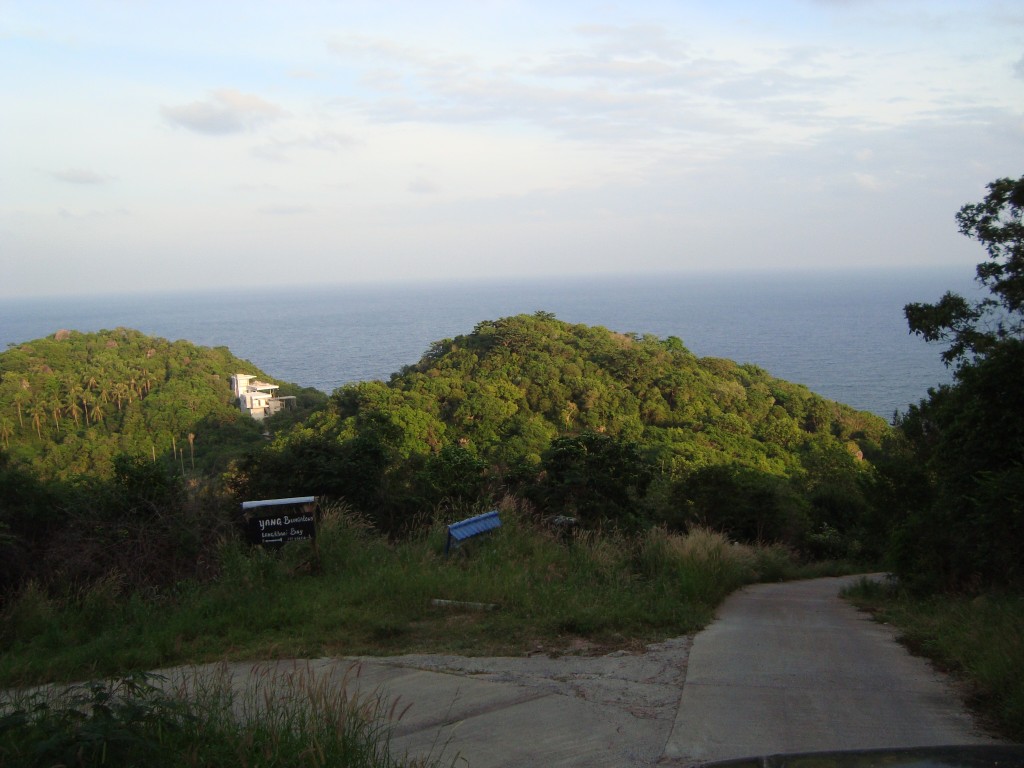 Once there, we were a little rattled, not to mention exhausted. But we starting walking around and immediately forgot about the crazy ride because we were stunned by how amazing and beautiful the place was. We felt like kids in a candy store while we explored our room and the resorts’ grounds. The bamboo bungalows were definitely rustic, but they were so cool it made up for the lack of hot water/AC. Luckily for us it was quite windy the whole time we were there, so we didn’t miss the AC. Though that same cool weather made the cold showers a bit more refreshing than we needed them to be. 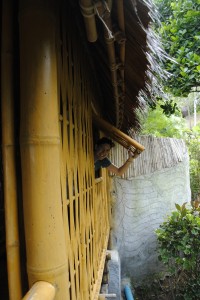 Lori looking out the side window; the concrete wall in the background is the bathroom wall.

The outdoor bathroom had a bed of rocks for a floor, and the sink was a large slab of beautiful wood with a faucet and an actual drain in it. there was a modern toilet in the center of the space, as well as a shower connected to the ~5 foot concrete wall that enclosed the whole area. And, if anyone was coming down the hill at just the right angle while you were using the facilities, they may have seen more than either of you wanted.

The only wildlife we found in our bungalow was an abundance of mosquitoes, while our neighbors saw a very large gecko in their bathroom (not the cute little tiny ones). They also spotted a crab in the shower area and a rat that came back and ate their snacks when they were away. They also heard other noisy animals crawling around either under their bed or under the bungalow, so we considered ourselves lucky on that front.

The whole place was sitting high up on a cliff on the edge of the sea, and it was so artistic and interesting. Almost everything was made out of stone or weathered wood. Just fantastic. Hopefully the photos will give some idea of what it was like. 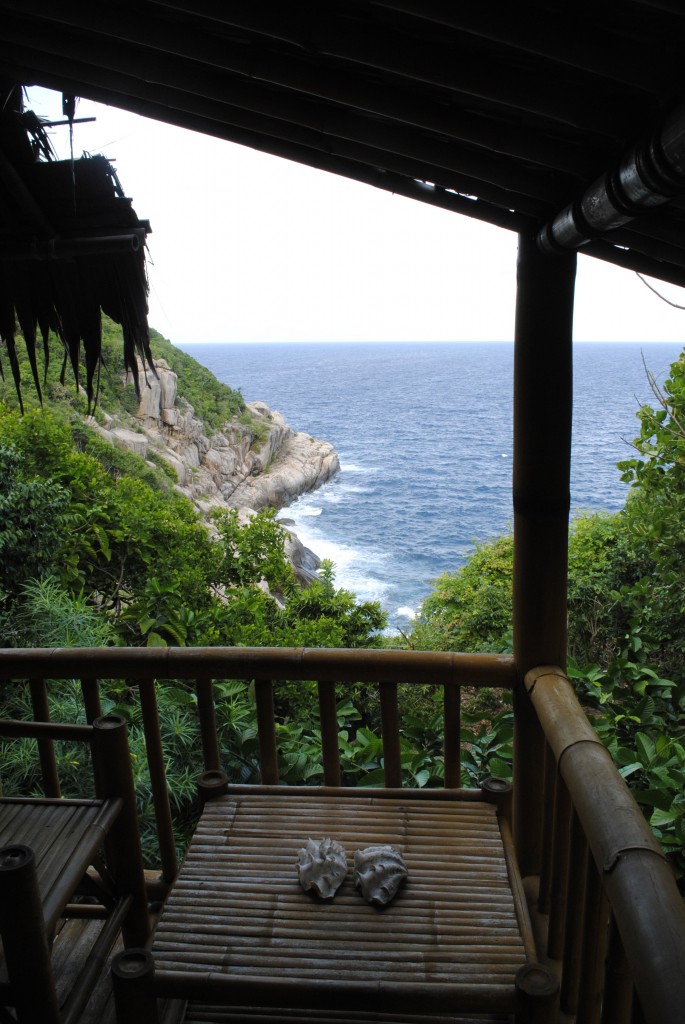 View from the front porch. The entire bungalow was made of bamboo. 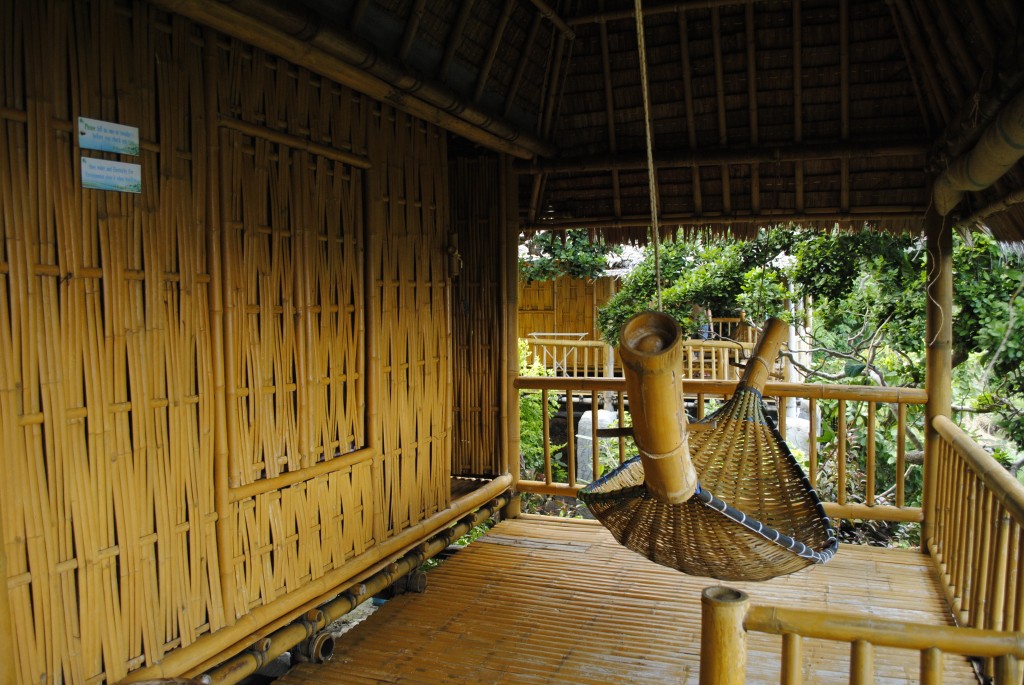 Hammock on our front porch. 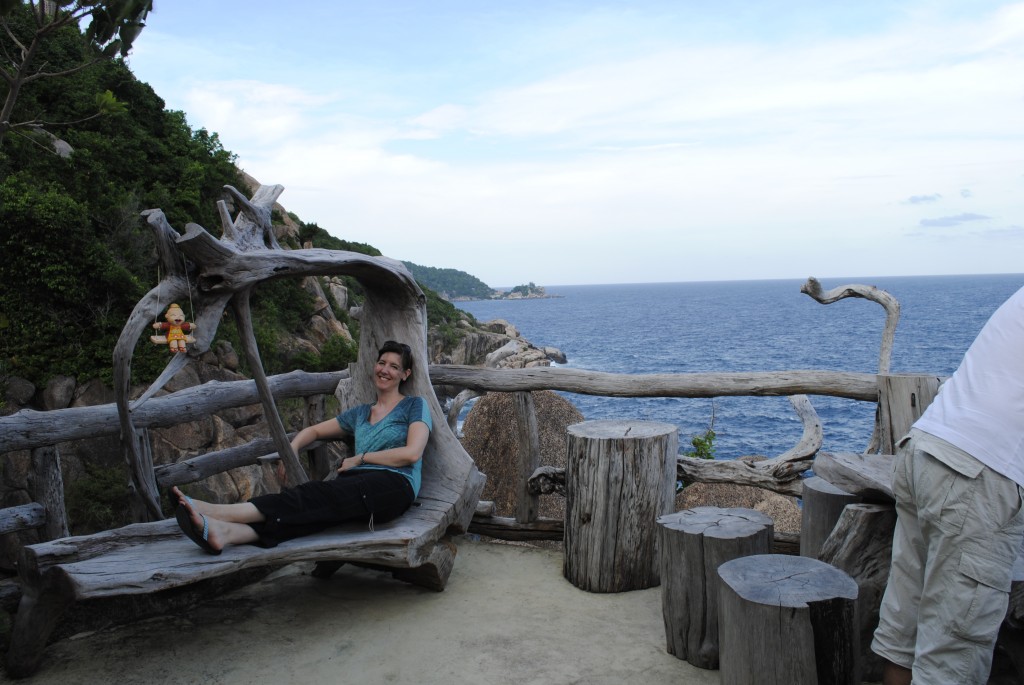 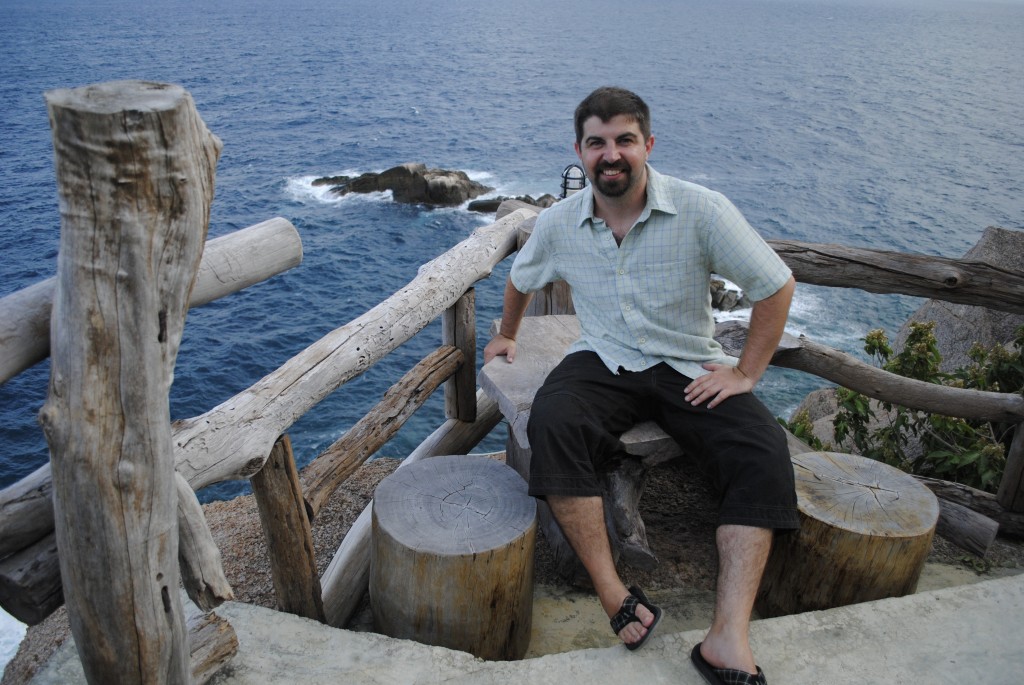 Another view from the terrace/restaurant area on Moondance Magic, Ko Tao. 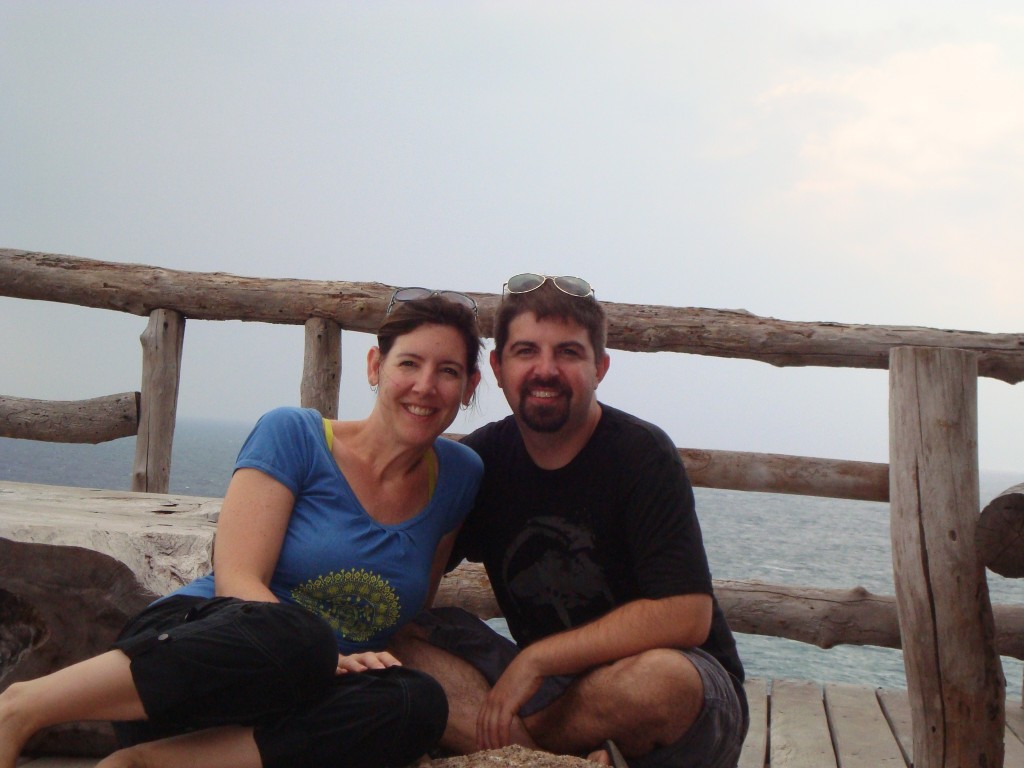 Here we are sitting at the table where we spent Christmas night. 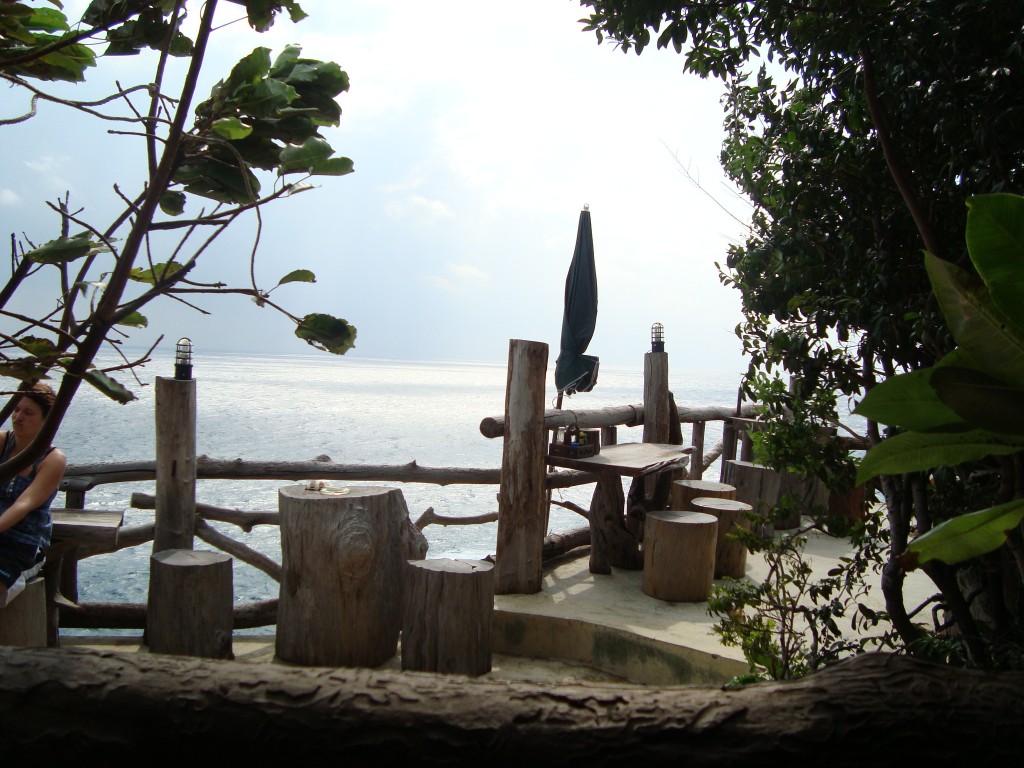 More of the interesting design. 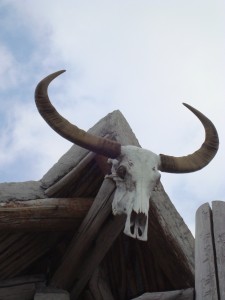 There were several of these skulls hung around the resort.

In addition to this really neat area at the top of the cliff, there was a series of zig-zagging steps, ropes, and ladders leading down the cliff to a large platform right over the ocean. Apparently when the water was lower and the wind less fierce, you could climb around the rocks to the cove next door and do some snorkeling. High water and wind prevented us from snorkeling, but we did climb down to the bottom a few times and felt like we were in the Swiss Family Robinson. It was like a playground for adults.

We did leave the resort a few times and also spent Christmas on Koh Tao. More on that in the next post. 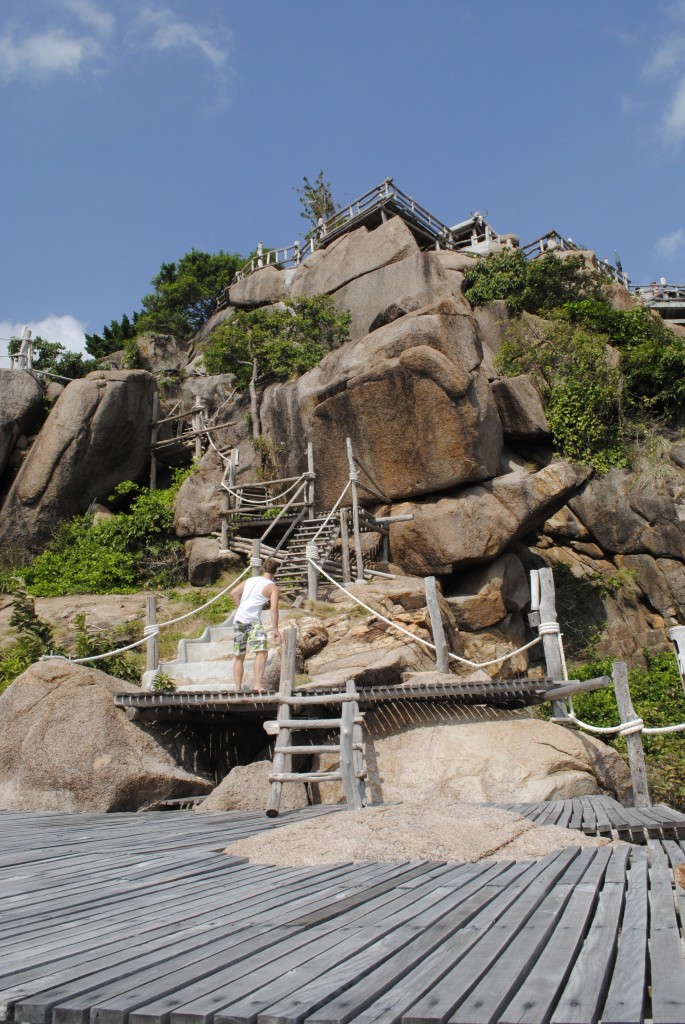 View from the platform at the bottom 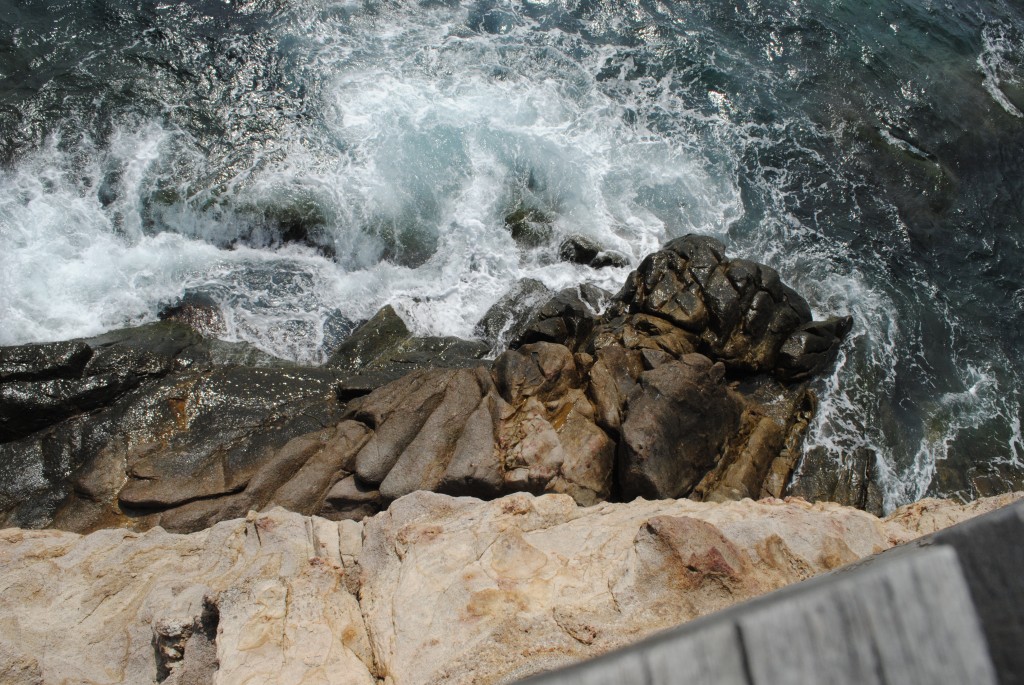 View over the edge of the platform 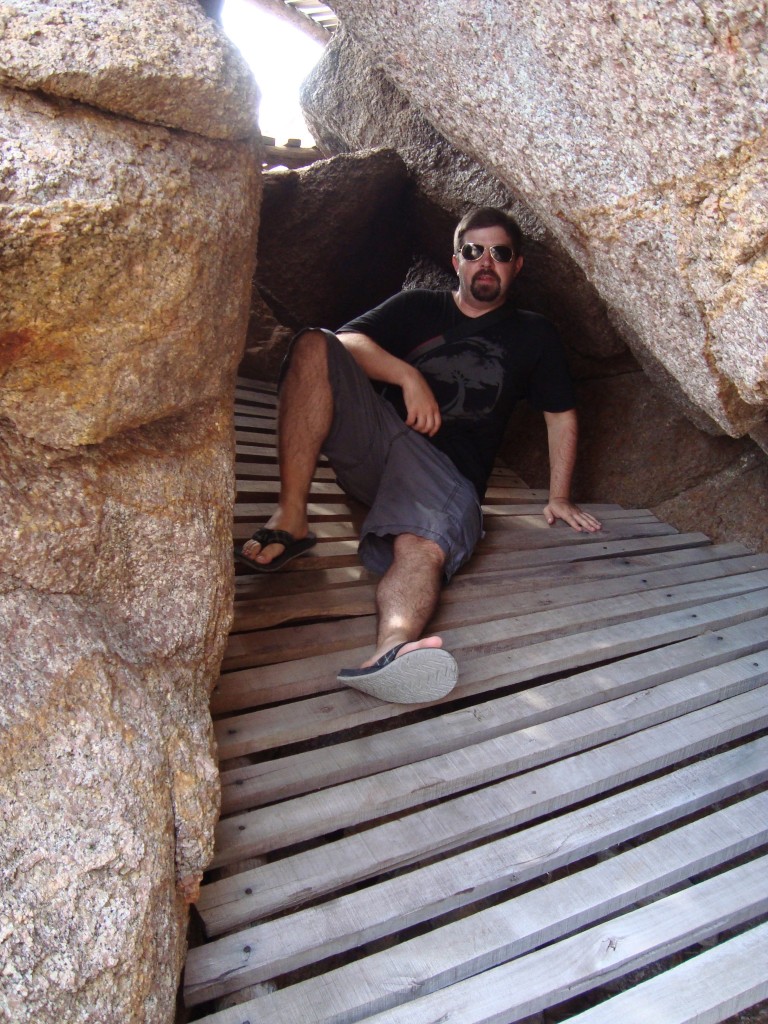 On the way down to the bottom

At the bottom of the cliff 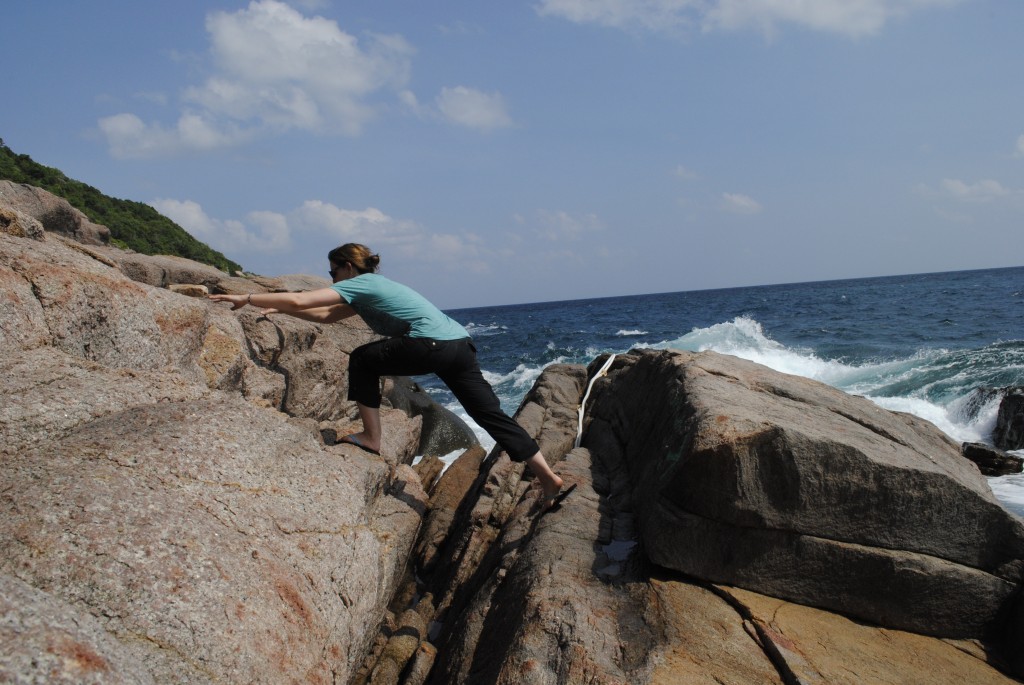 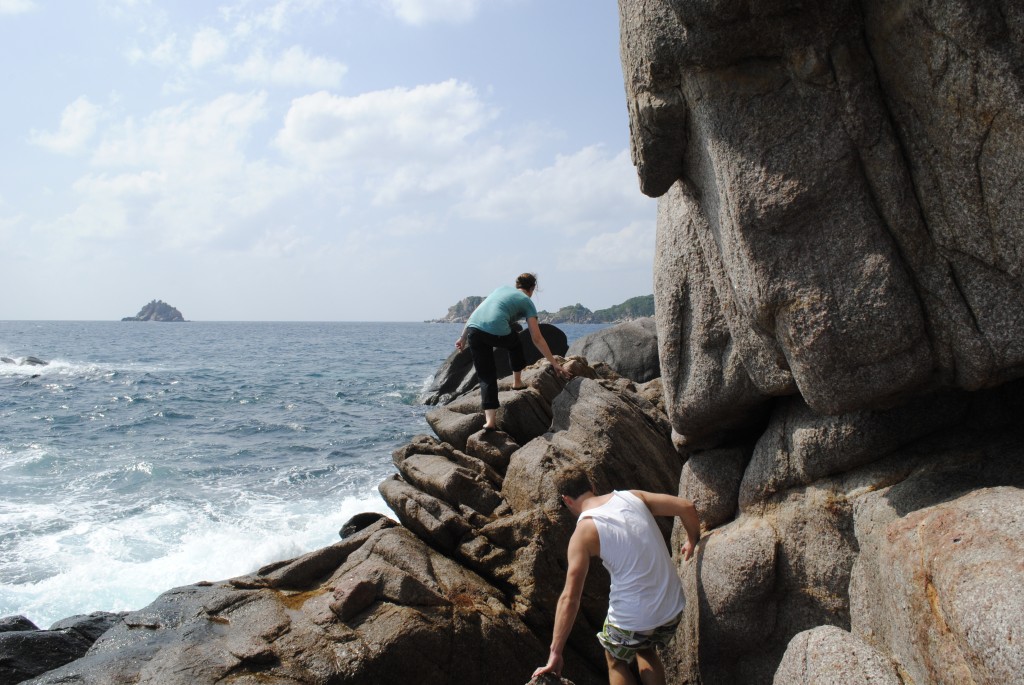 Always a good idea to boulder on wet rocks in flip flops! 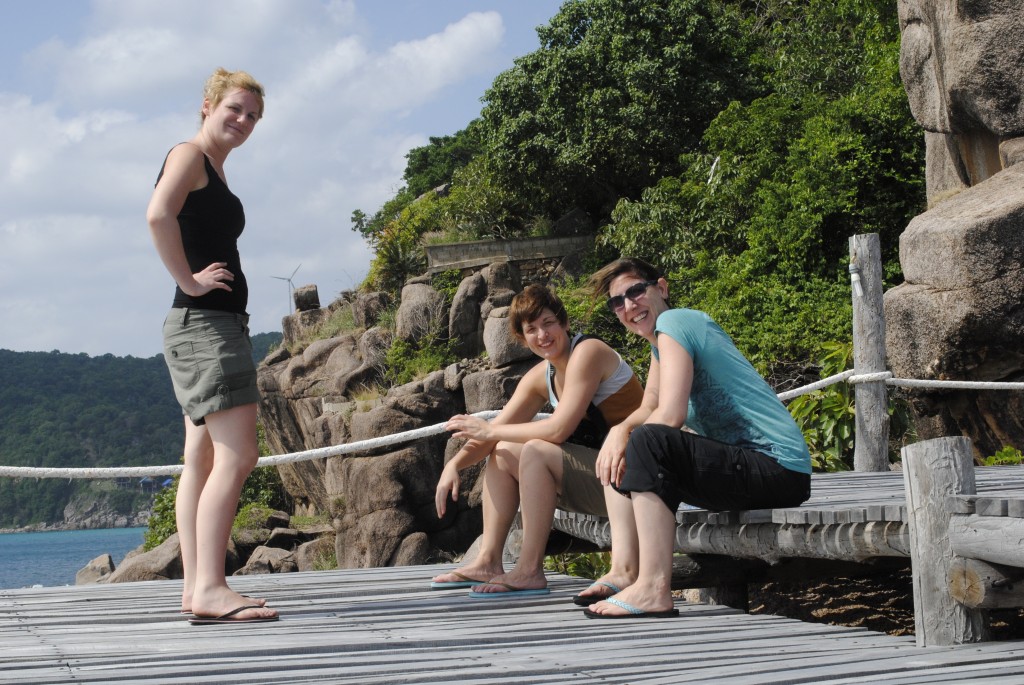 Hanging out on the platform with new friends

One thought on “Our Playground on Koh Tao”