Koh Tao -> Chumpon -> Hua Hin -> Bangkok; ferry -> bus -> train -> mini-van; over a week we leisurely made our way up the East coast of the Gulf of Thailand, skipping like a rock over water. A night in Chumpon and a screwed up reservation worked in our advantage, as we not only got a better room but a better hotel. There’s not much to Chumpon, a working town that for tourists is mainly a transfer point from the islands to the mainland, the next day we quickly moved on. A quiet train ride in a surprisingly small train – only two cars in total – took us from Chumpon to Hua Hin and gave us beautiful views of a bucolic Thai country side. Pineapple and coconut farms, coast line and hillocks rising out of flat lush coastal flood plains. 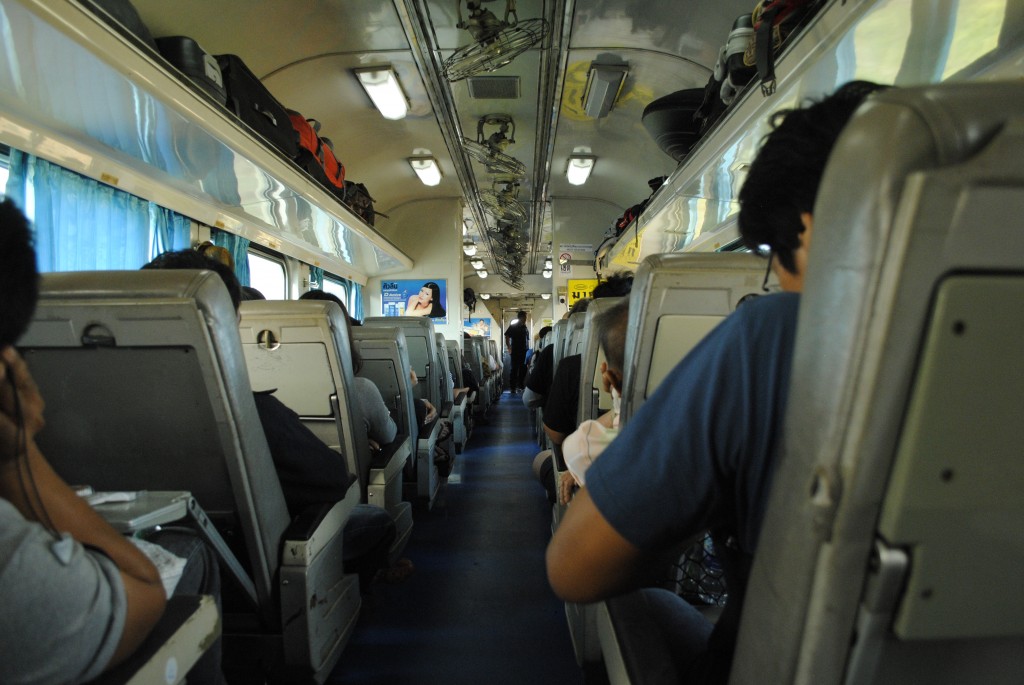 Our car in a little tour car train traveling from Chumpon to Hua Hin. 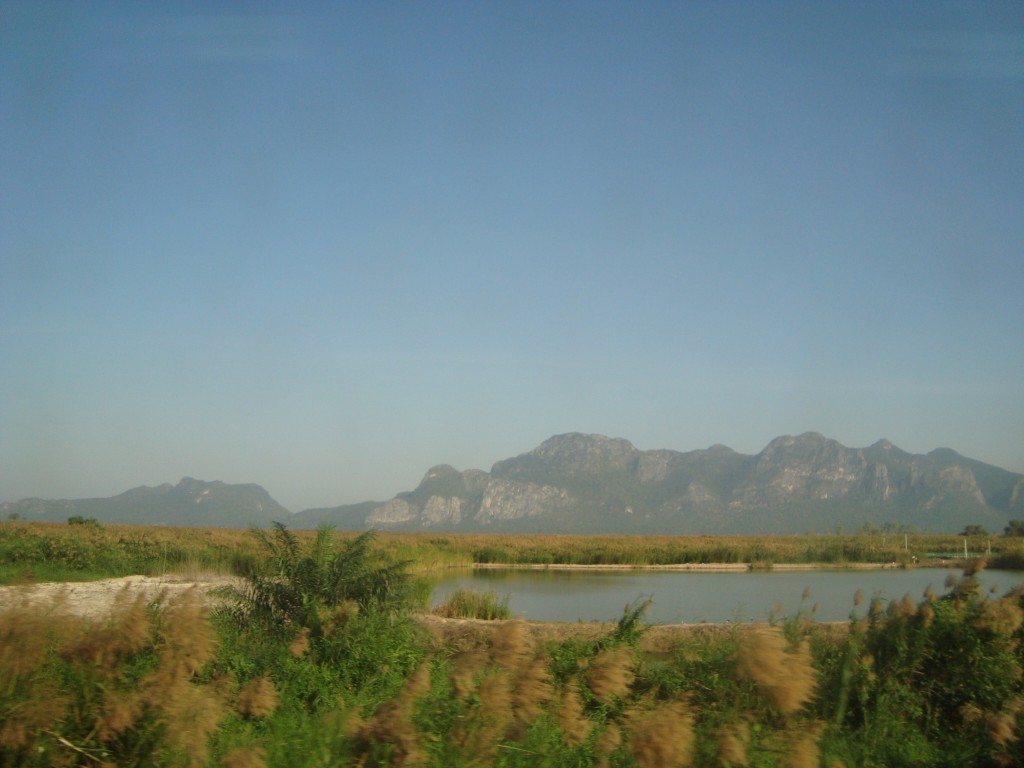 Thai country side streams past as we make our way by train from Chumpon to Hua Hin.

With a few whistle blasts to announce our arrival to all the people randomly crossing the tracks (which was happening quite frequently), we pulled into the preserved 1940s station house in Hua Hin. Hua Hin is the original Thai beach vacation spot – the Thai royal family started coming here in the 1920s. Just a few hours car ride from Bangkok, it is the Hamptons for the metropolitan Bangkok Thais. Although it reminded me a bit of Miami, sometimes Atlantic City. 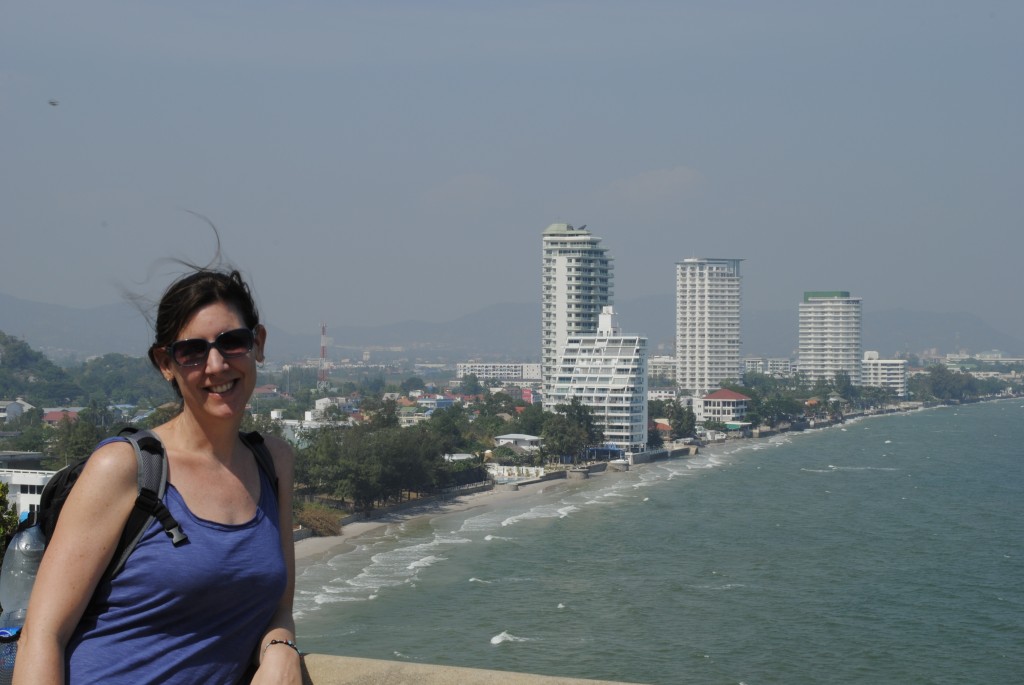 Lori from Chopstick Mountain with a view of Hua Hin in the background. Very windy, Hua Hin is also becoming known as a kite boarding center.

We had an odd accommodation. Actually, we had an odd room in a fairly straight forward accommodation. The Donkeys Rest is a suite of rooms above four store fronts owned by a British bloke with the last name Ogier, who also happened to look a lot like Shrek. A bit far from but within walking distance to the beach, we had chosen it for it’s cheap cost and access to a pool. (When you don’t want to regularly shell out a ton of money on excursions or beach front, a few extra dollars a night for a pool is a good compromise.) The four store fronts were hotel bar and reception, massage parlor (not that kind), a convenience store, and our room. Yup, we were staying in a cleared out store. A sofa, coffee table, TV, refrigerator, and king sized bed, all dwarfed inside a white-tiled, glass-enclosed, cavernous space that at one time had probably housed racks of surrongs, bikinis, t-shirts that read “Same Same”, and sunglasses. And that’s not even counting the separate back room and bathroom.

The beach along most of Hua Hin was tiny but like the Hamptons, people go there on the weekends for the scene, to see and be seen, rather than lazy days on the beach and quiet nights. We explored the natural sites, paying $.20 a ride to the jump aboard roving sungathews that followed a regular circuit along the coast highway. We climbed “chopstick” mountain to the south and roamed the frenetic, bustling night market in the center of town, crowded on a Friday night with both tourists and Bangkok’s young hoypoloy. What would become SOP for our night market excursions throughout the trip, Lori shopped, I sampled food stalls and drank cold cans of Chang. Restaurants moved their kitchens outside and lined the streets with large fire breathing grills, each overflowing with fresh caught fish, steaks, squid, and some of the biggest lobsters I have ever seen. Old ladies sold pork meatballs on skewers and grilled corn. A guy on the corner pulled set after set of BBQ short ribs out of a barrel. I ate there twice. On the same night. 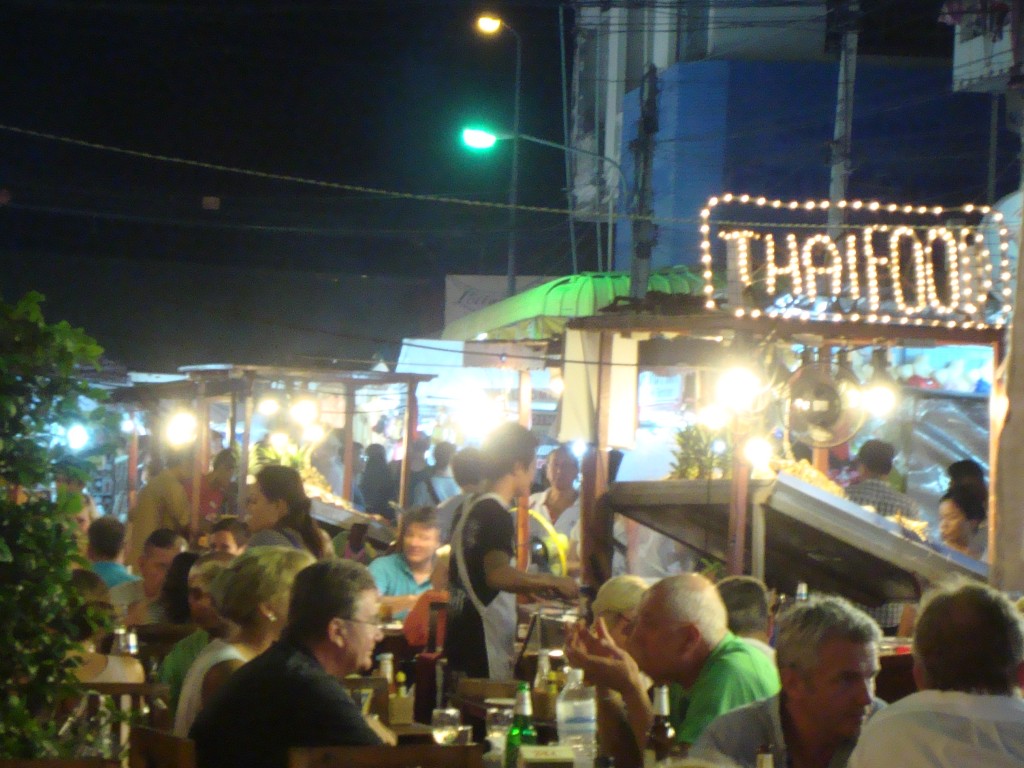 I have to admit, we also stopped at Starbucks and explored an actual mall. We considered it preparation for our return to Bangkok.

After a few short days in Hua Hin and with three and a half months of loosely planned trips to northern Thailand, Lao, Vietnam, and Cambodia in our future, we decided it was best to head back through Bangkok for New Year’s Eve, reassess, research, and maybe buy a guide book or two.

With our last full day in Hua Hin drawing to a close, I headed off to the bus station south of town to buy tickets. From there I was sent to the bus station north of town to buy tickets. The bus station North of town no longer existed and most people I asked insisted that I go to the bus station south of town. Fun game. Turning to the two equally crappy maps I had, I discovered hints about a satellite bus station in town, so I went off looking for that. After a few circuits of the center of town and with the help of a few unhelpful locals (and two beers), I finally bought tickets for the bus. Which the next day turned out to be tickets for a private mini-bus and not the bus – which I kind of suspected but at the time but with heat exhaustion setting in, I could no longer care about the distinction. In the end, as the t-shirts here read, Same Same, and the mini-bus got us into Bangkok just fine.

Our hotel in Bangkok turned out to be a bit out of town at the Bang Na stop on the BTS. But this was ok as it was very nice, cheap, had a beautiful view of the Bangkok skyline, and the walk from the BTS station was not as scary as the reviews made it sound. The view was nice enough that we decided to watch the New Year’s Eve fireworks from there (after we video chatted with our friends Alex and Camille about their upcoming trip to South East Asia). Since this was more a reconnaissance mission than a trip to Bangkok, we hit the malls looking for English language bookstores and planned our route north. And had another adventure finding the bus station – they’re usually in neither convenient nor nice parts of town. Just like home.

As we made another run into town for books and other supplies, I splurged and had a Guinness and a burger. $6 for the Guinness, nearly 5x the cost of a local beer.

One thought on “Skipping up the Eastern gulf coast”