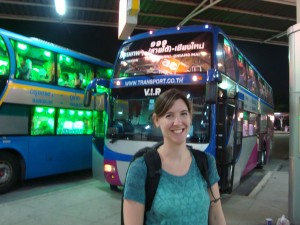 Having done nearly 3 weeks of relaxing on gorgeous Thai beaches, I felt like the ‘real’ adventure on our trip began as we headed to Chiang Mai. We loved the beaches, of course, and the cultural differences were very much there, it just didn’t feel like there was as much culture. Further, our lackluster trip up the gulf coast through Chumpon and Hua Hin made us even more excited to get to Chiang Mai, which everyone whose been seems to love. 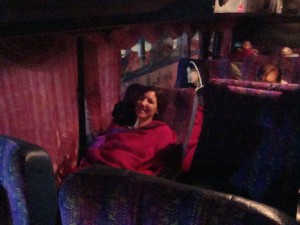 On the overnight bus to Chiang Mai.

I was also very excited to take our first overnight bus as we headed north from Bangkok. It was better than I expected in terms of comfort and roominess. And other than it being fairly bumpy, we figured that we both slept for around 5-6 hours of the 10 hour trip. Thank goodness we could check into our hotel on arriving at 7 am and crash until noon.

Chiang Mai is known for its abundance of temples, or Wats, and there are over 300 Wats in and around the city. We went to 3 in a row on our first afternoon and might have overdone it because we didn’t care to explore another Wat until about a week later. I feel like we barely scraped the surface in terms of exploring the Wats in Chiang Mai, but here is a selection of photos from our visits. More in the next posts about Chiang Mai’s markets and other activities. 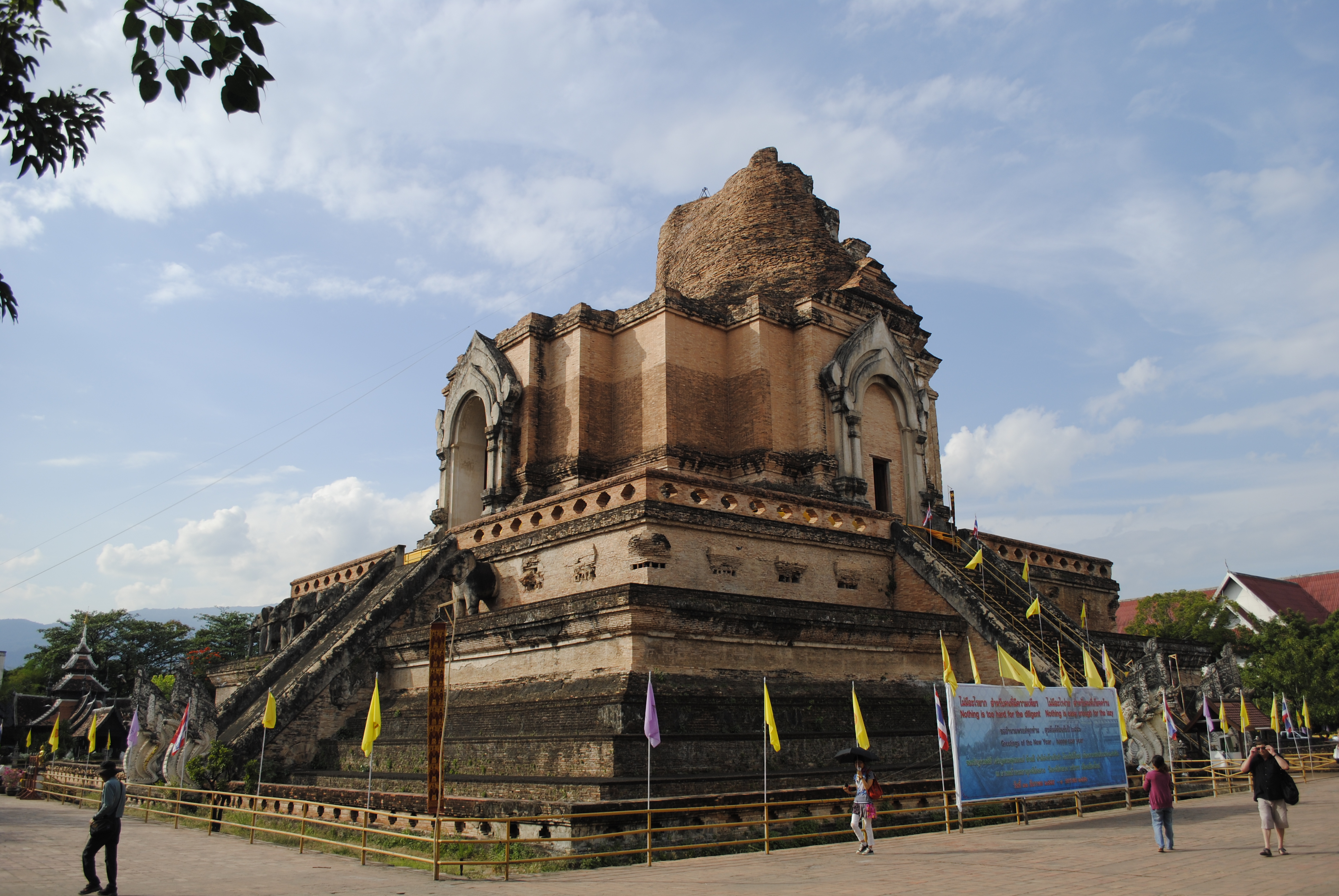 Wat Chedi Luang in the Old City. Originally constructed in the 14th Century. 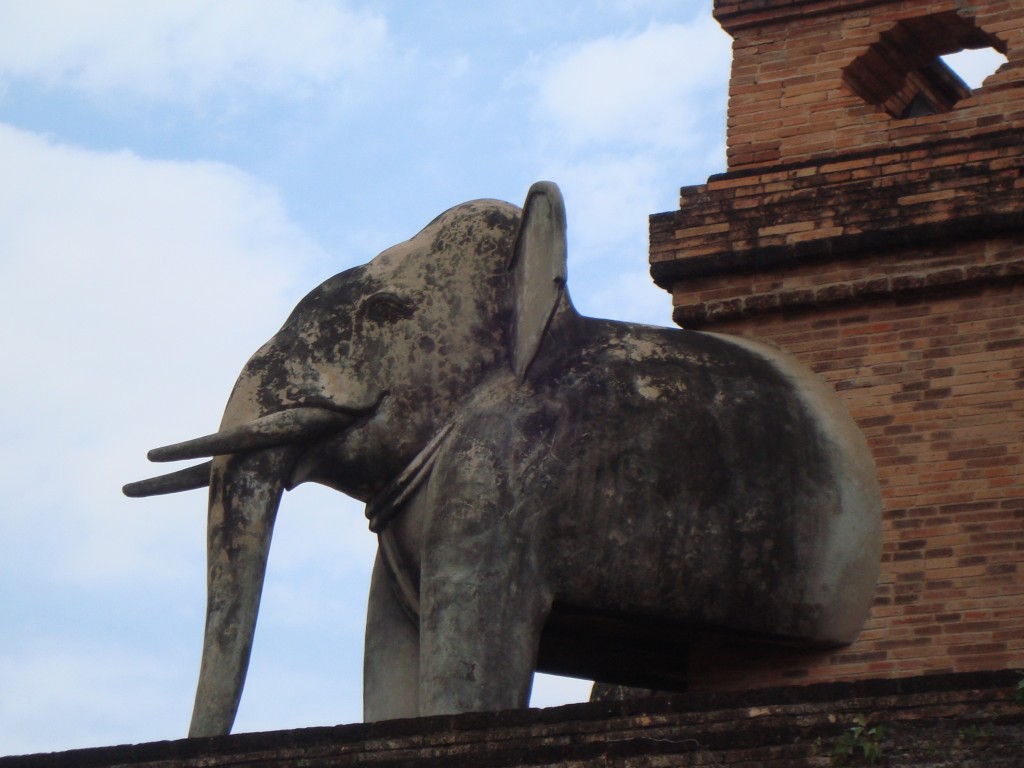 Close up of elephant on the side of Wat Chedi Luang 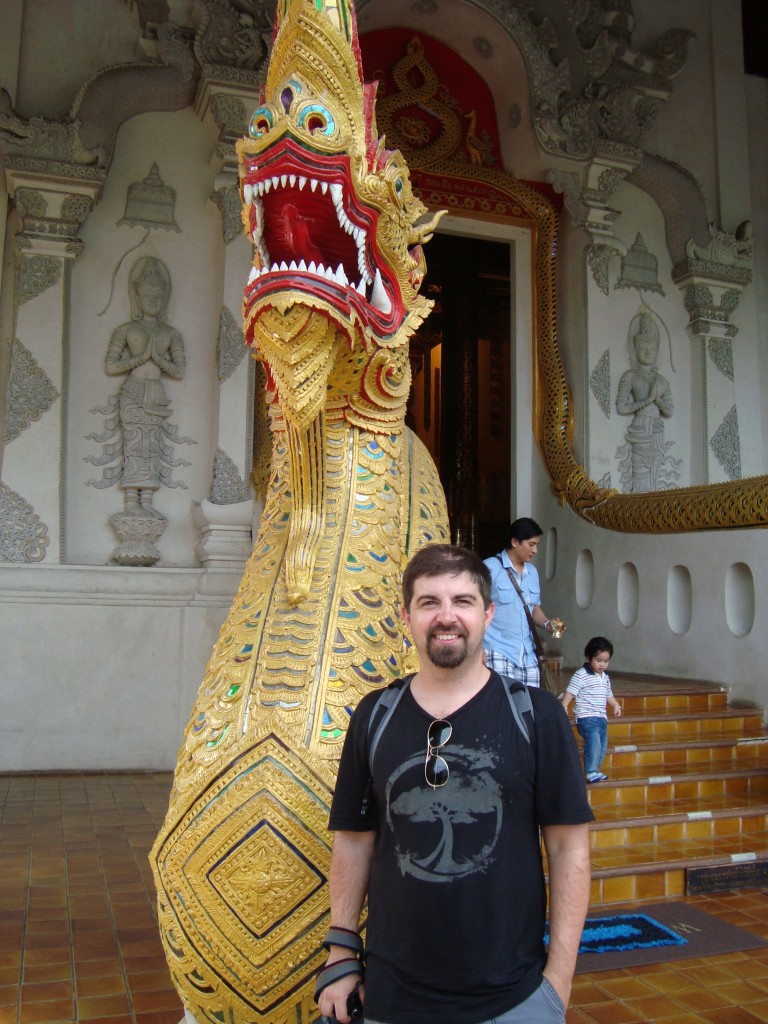 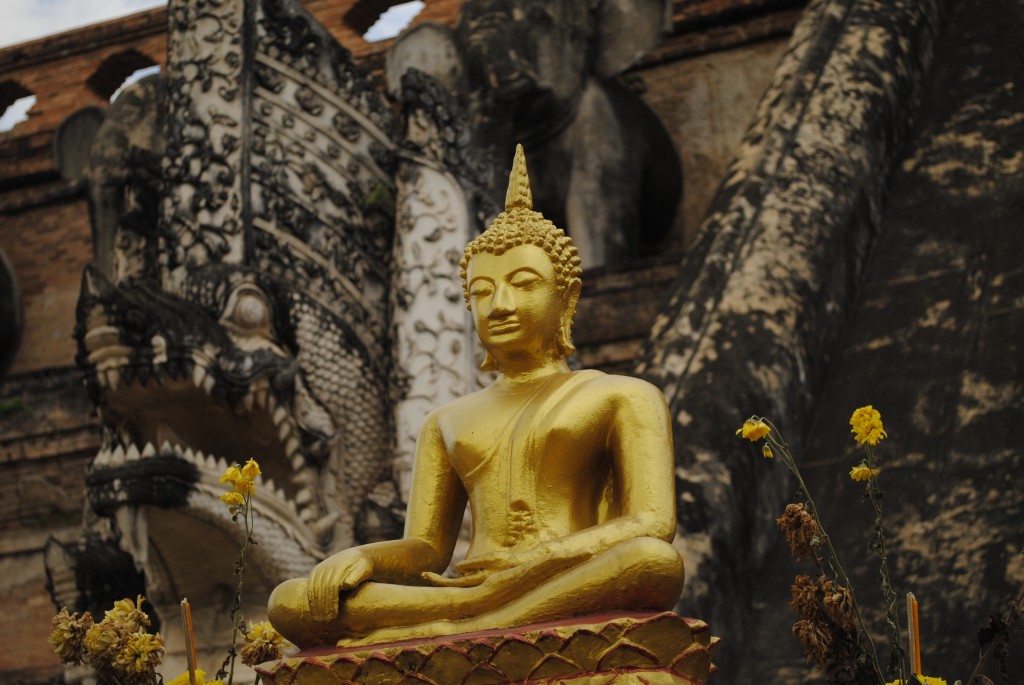 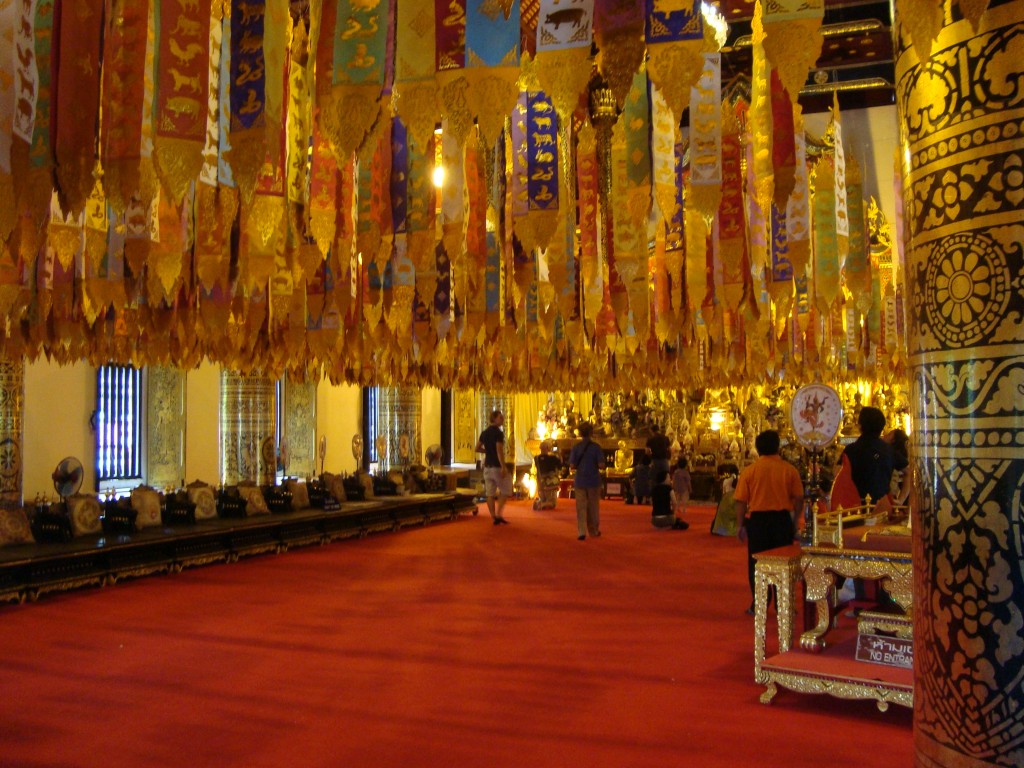 Inside of one of the smaller temples at Wat Chedi Luang. 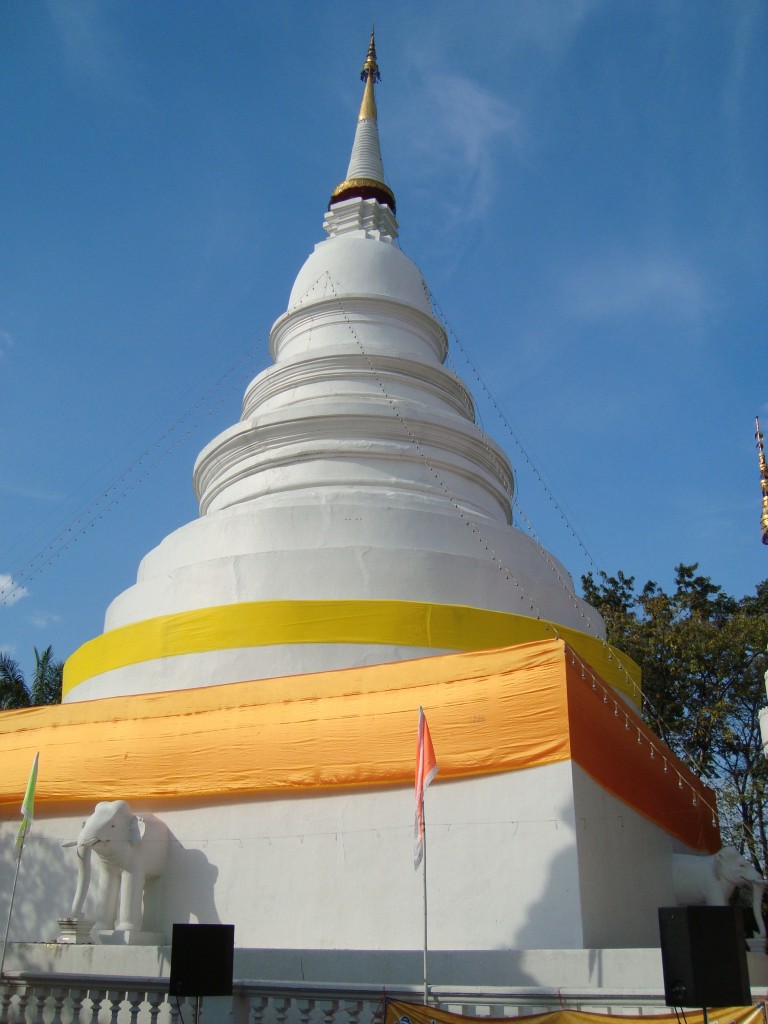 Wat Phra Singh in Chiang Mai. This is supposedly the most important temple complex inside Chiang Mai. 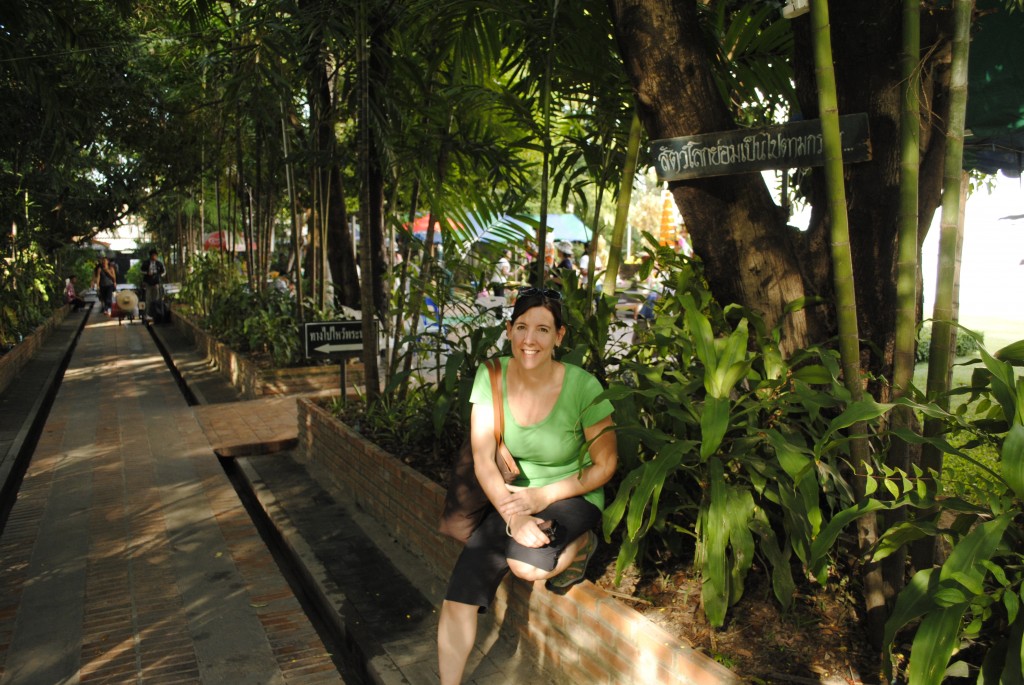 Walking through the paths in Wat Phra Singh complex. It was very peaceful and beautiful. 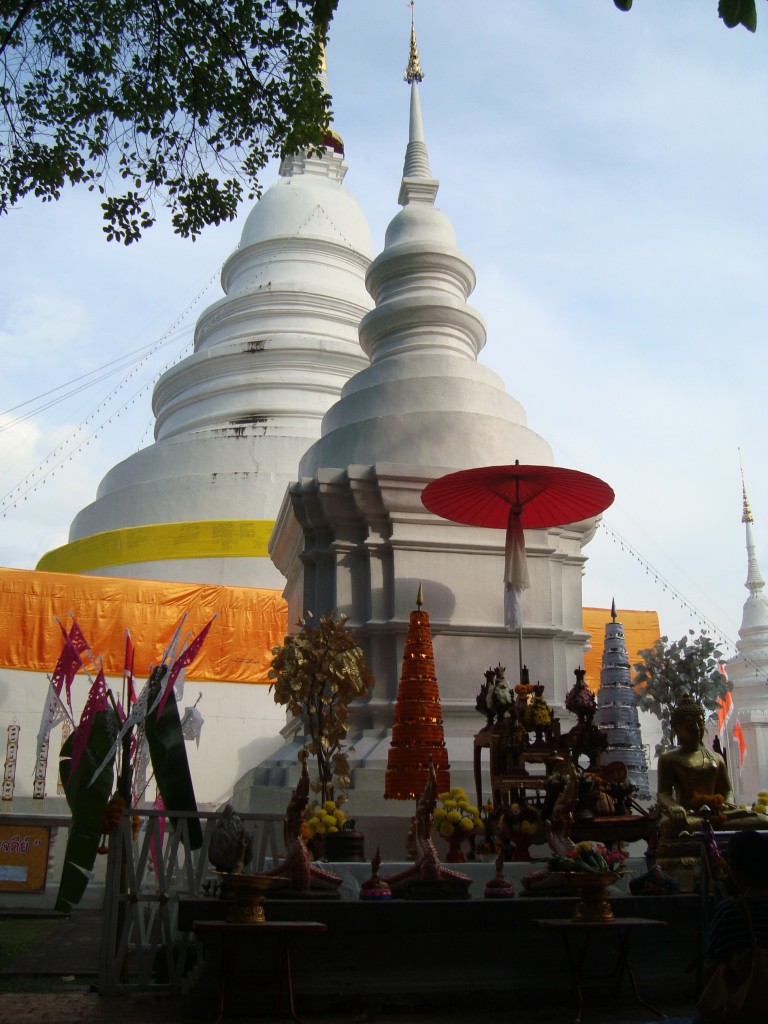 Altar of offerings in front of Wat Phra Singh 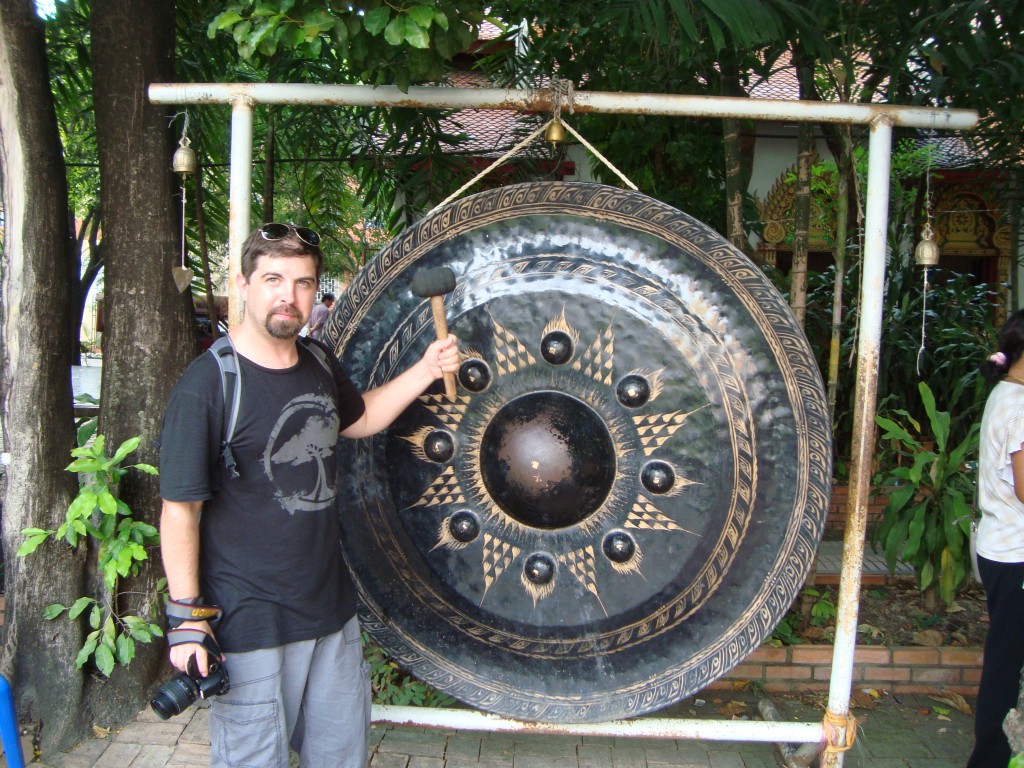 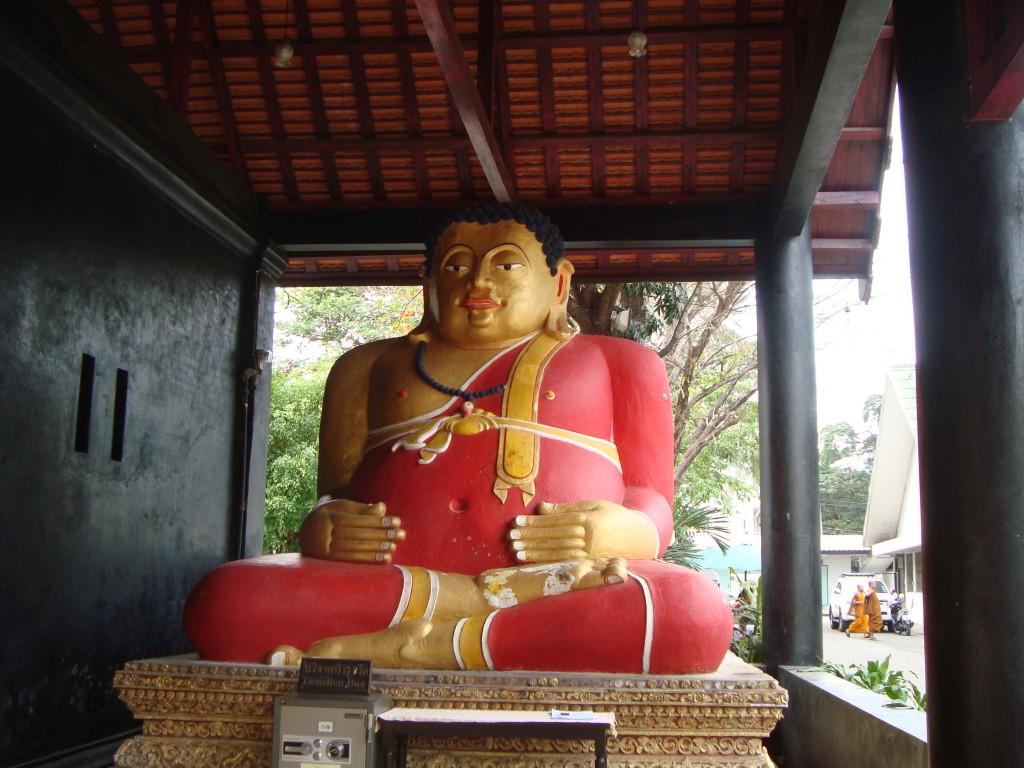 Buddhas come in all shapes and sizes. 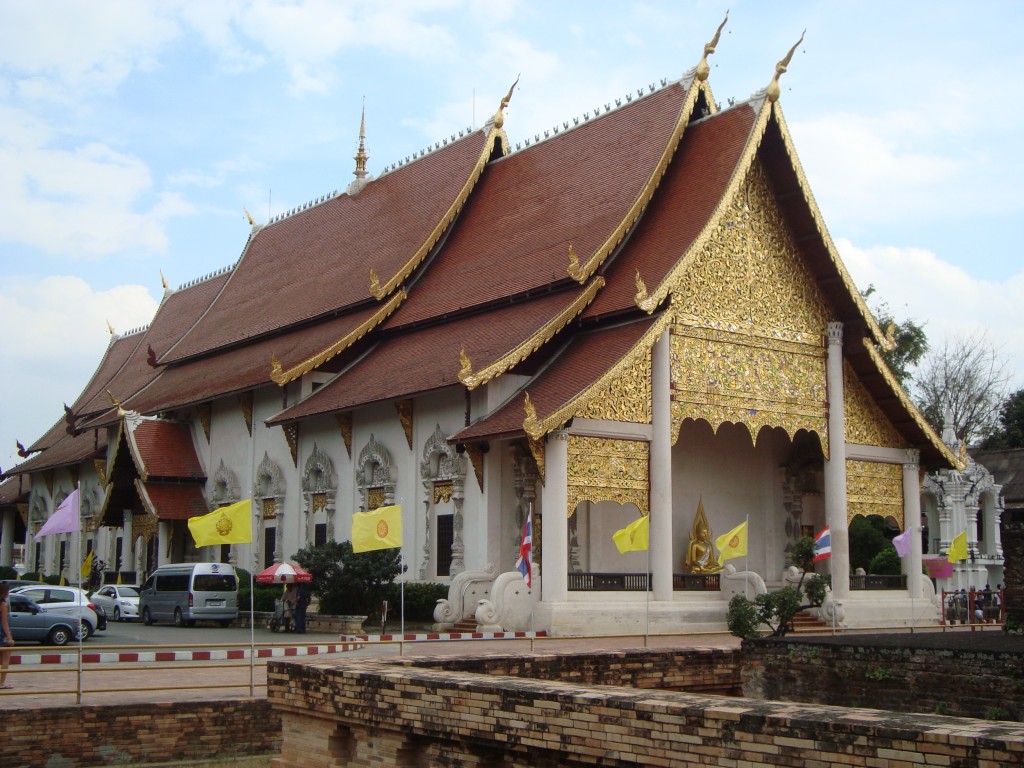 At the end of our week there, we did trek outside of town to Wat Doi Suthep, which is atop a mountain overlooking the city. It was worth the trip and probably my favorite temple I’ve visited thus far in SE Asia. 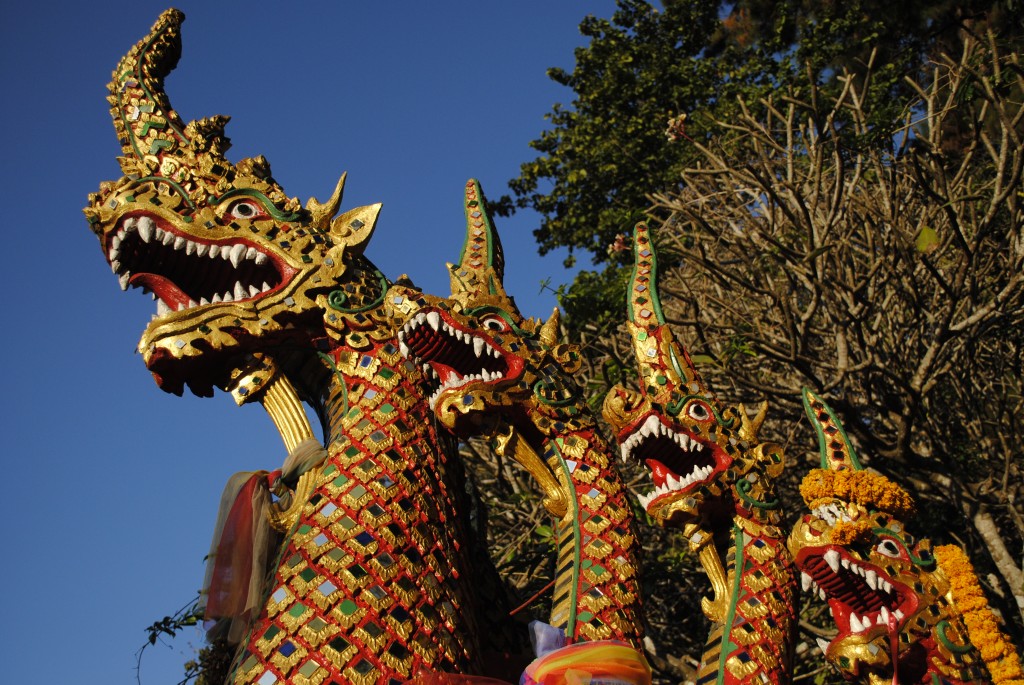 These dragons were at the base of the 309 steps leading up to the temple. 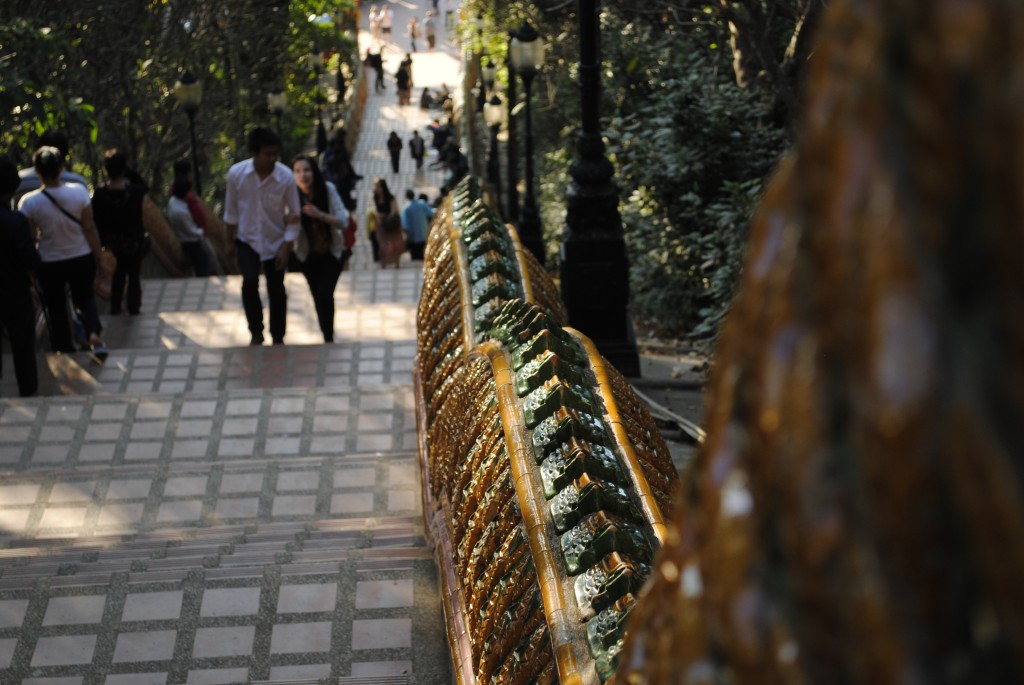 Looking down the stairs at Doi Suthep 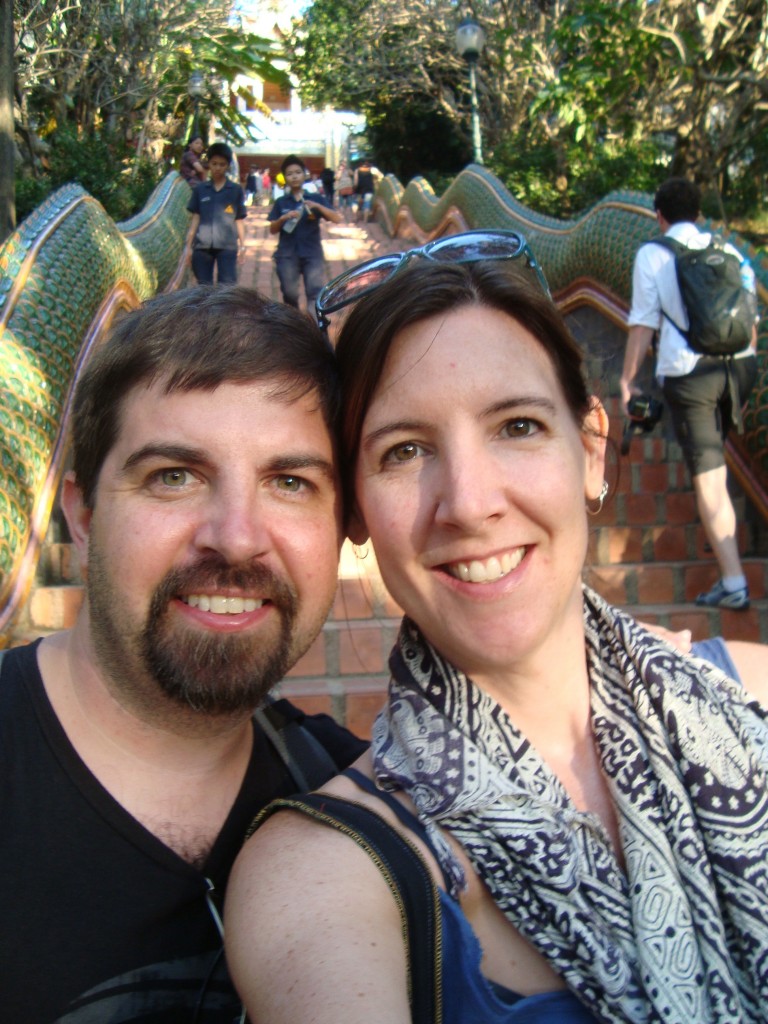 Near the bottom of the steps after climbing Doi Suthep. 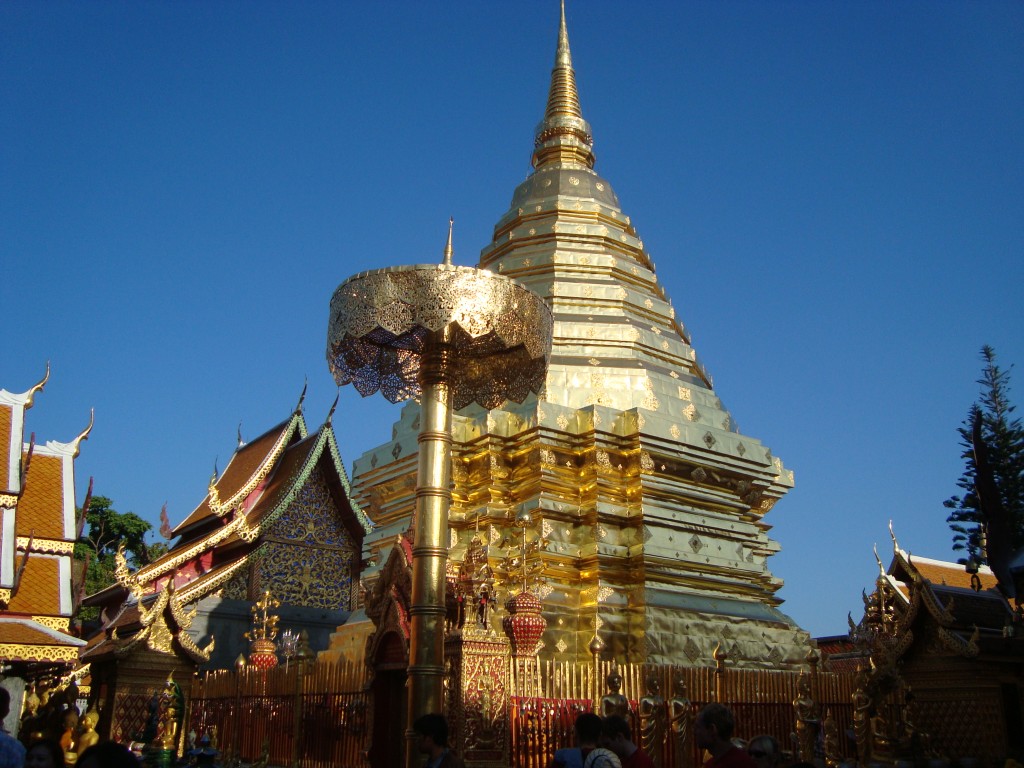 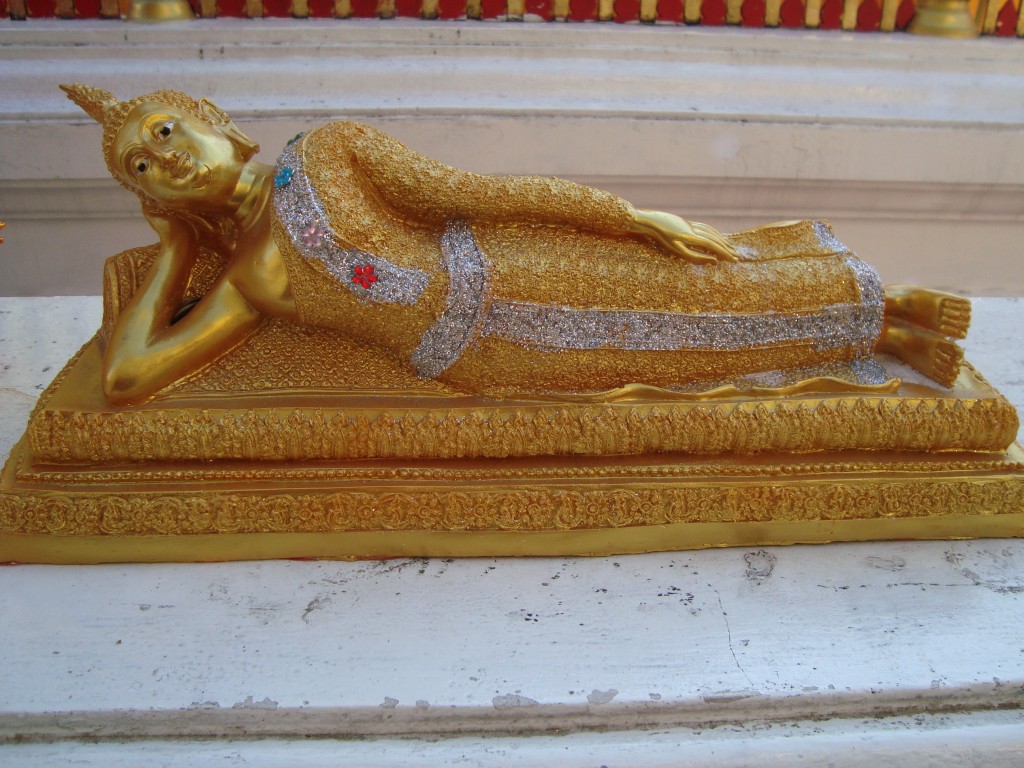 One of the many very sparkly Buddha images at Doi Suthep 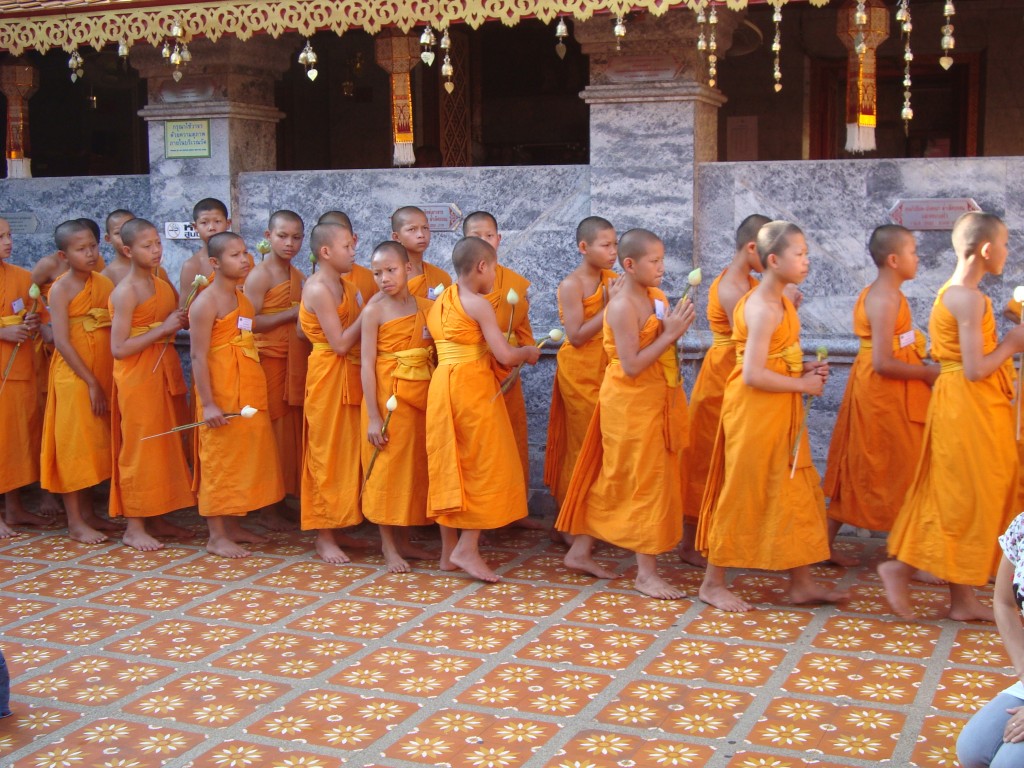 Young monks at Doi Suthep performing their evening ritual and prayer of walking around the Wat three times. Sunset was a beautiful time to visit. 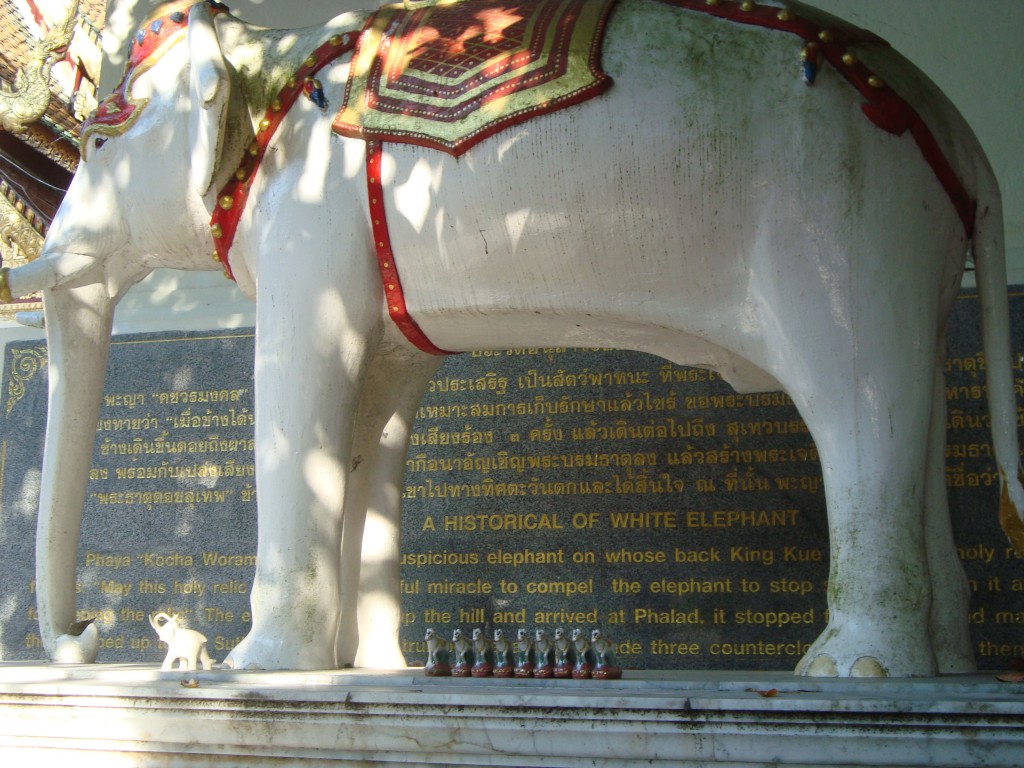 White elephant shrine at Doi Suthep. Legend has it a white elephant carried a significant religious relic to this mountain and died there, so religious rulers took it as a sign and had a temple built on the mountain. 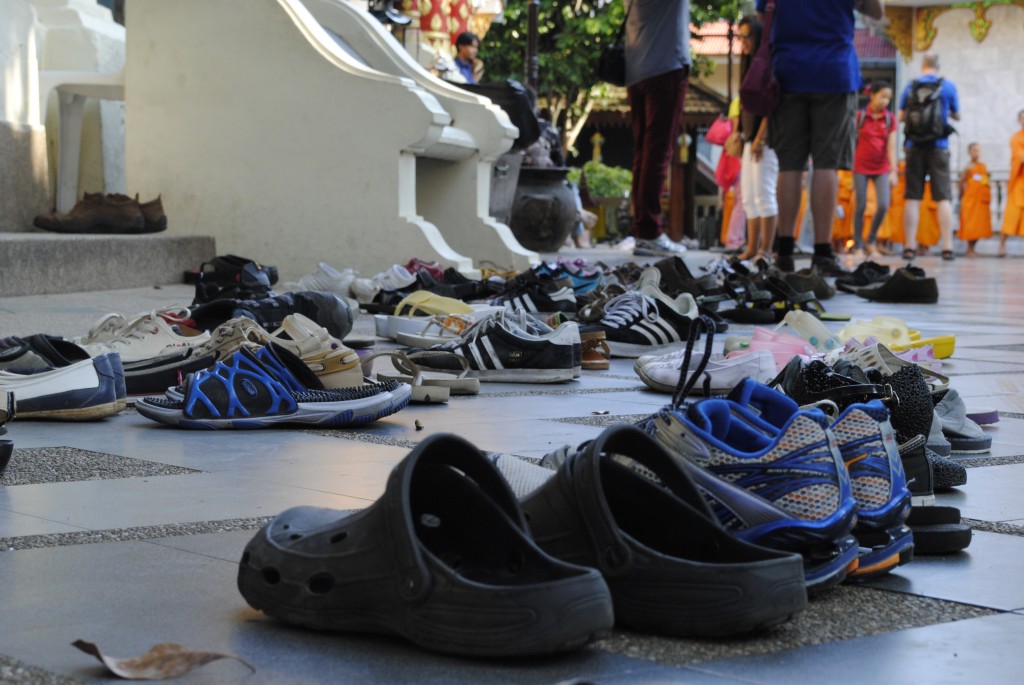 Shoes outside of Wat Doi Suthep. To enter a Wat, everyone must remove their shoes, wear pants or long shorts, and women must cover their shoulders. 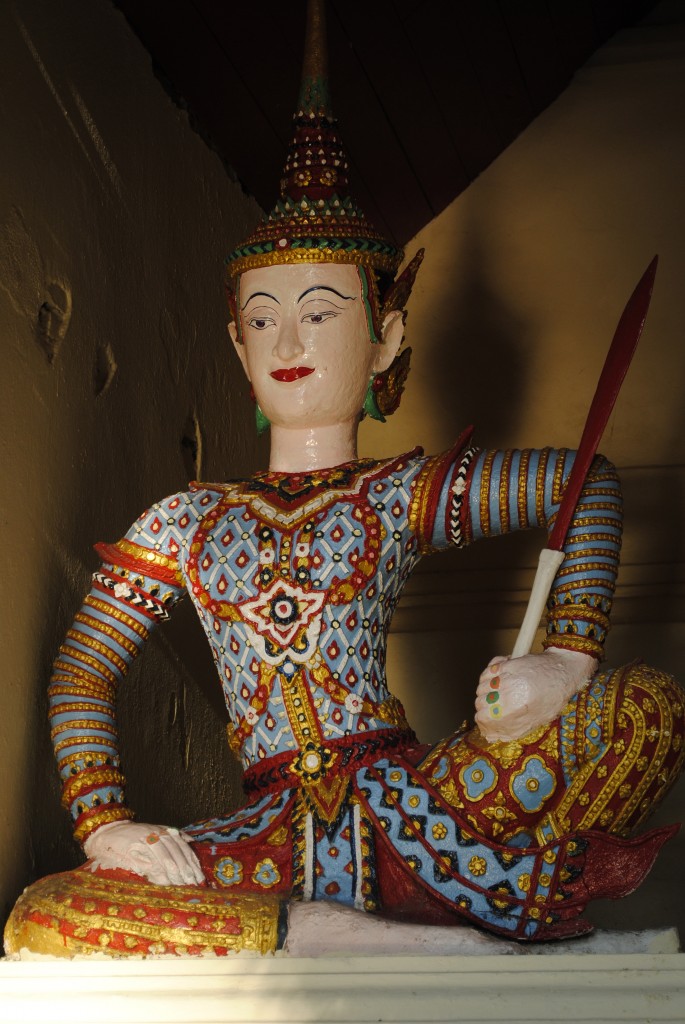 Another of the many statues at Doi Suthep 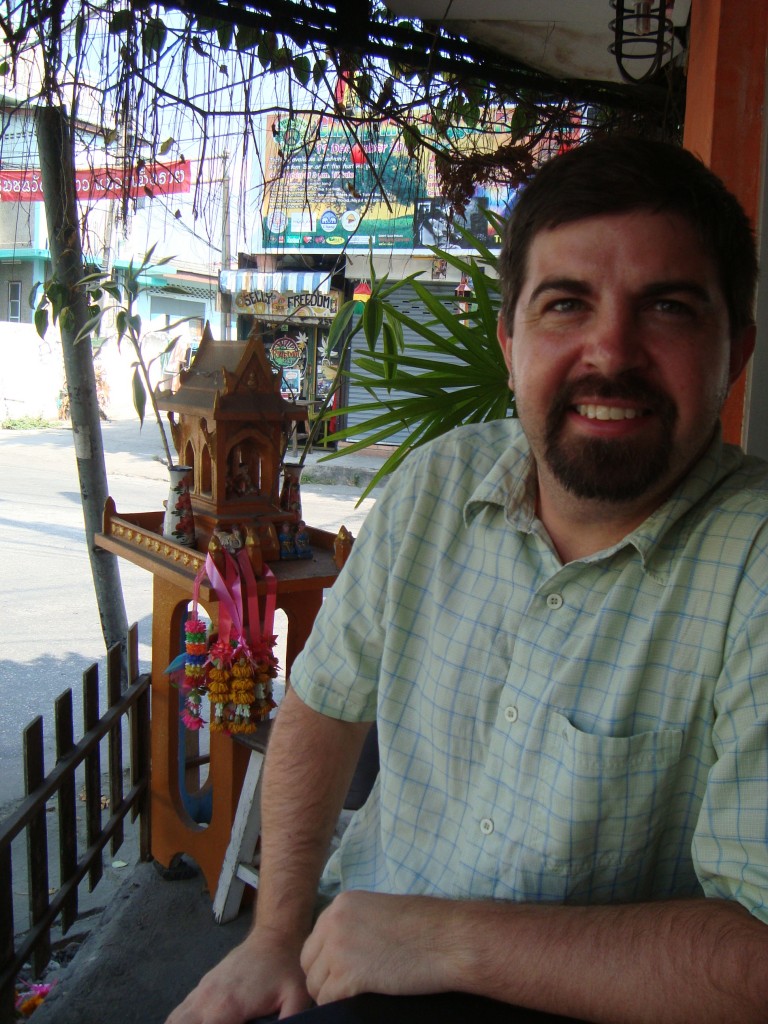 In addition to having so many larger-than-life-sized temples, most restaurants and guesthouses we stayed at in Thailand had an altar set up in a corner with a mini-Wat and daily offerings and flowers placed on it. Here is an example behind John.

One thought on “Wats Up Chiang Mai?!”