Seeing this elephant through the window of our taxi was as close to one as we got in Chiang Mai.

While we were in Chiang Mai, we also went white water rafting and had a great time. The 2 hour drive up to the top of the river took us through the beautiful mountainside where we got to see the elephants at the elephant camps and some glimpses of life in the local hill tribes.

An added perk to the day was that our tour company forgot to pick us up with the group, so we ended up riding comfortably for two hours in the back seat of a taxi (instead of in a crowded minibus), and got a generous discount on the rafting trip, and a free CD of their professional photos! This was a big boon for us given the rafting excursion was putting us over our budget that day!

The river was pretty low given it is the dry season, so the rapids were only class 3 (out of 5). This was good since it seemed pretty intense to us! I was slightly nervous as we headed up to the river and wondered if the trip would feel safe, how good the guides would be, etc. I have to say, I was extremely impressed with the company we used – Siam River Tours. There was a safety tutorial beforehand, and everything seemed very organized at the launch point. Our guide spoke really great English, so it helped that we could quickly understand and respond to his commands. There were also quite a few extra guides going down in “safety kayaks” in case anyone fell out, and at every rapid there were even extra guides on the bank watching and waiting with ropes, just in case. Apparently it is common for people to fall out every now and then, and there are rocks everywhere, so better to get out of the water as quickly as possible. So, even though the rapids seemed fairly big and the rocks all around us were even bigger, I felt very good about the trip. And, no one fell out in the rapids, so that was good.

Waiting at the top of the river.

I started out sitting behind John, but at the very beginning, our guide made me switch with the other woman in our group. John and I decided it must have been because we were such strong rowers that one of us needed to be on either side! Or … it could’ve been the opposite. 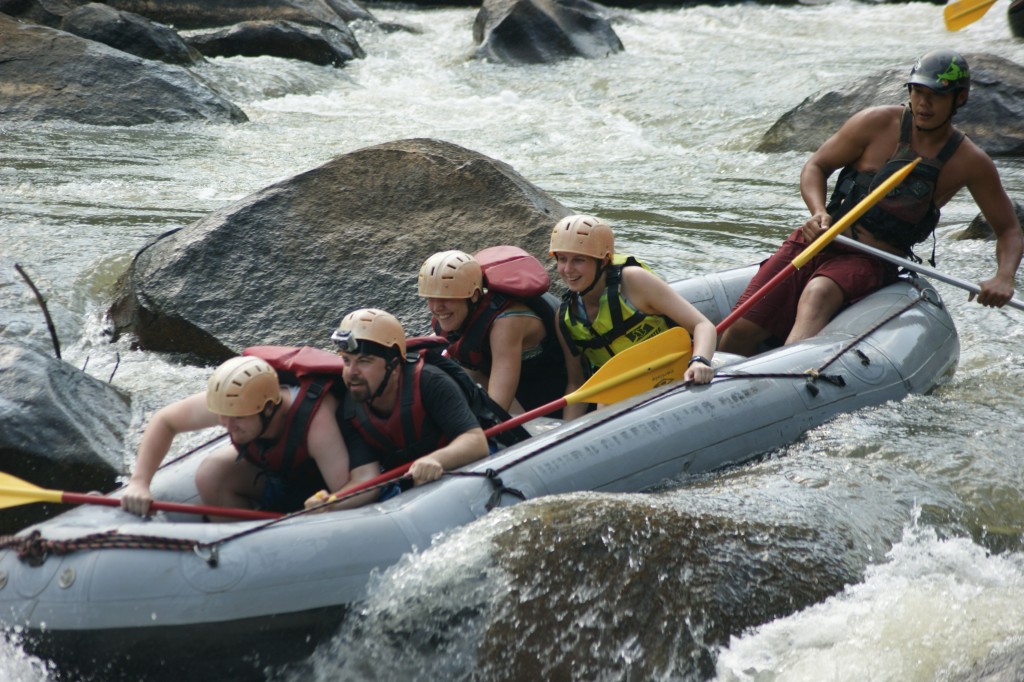 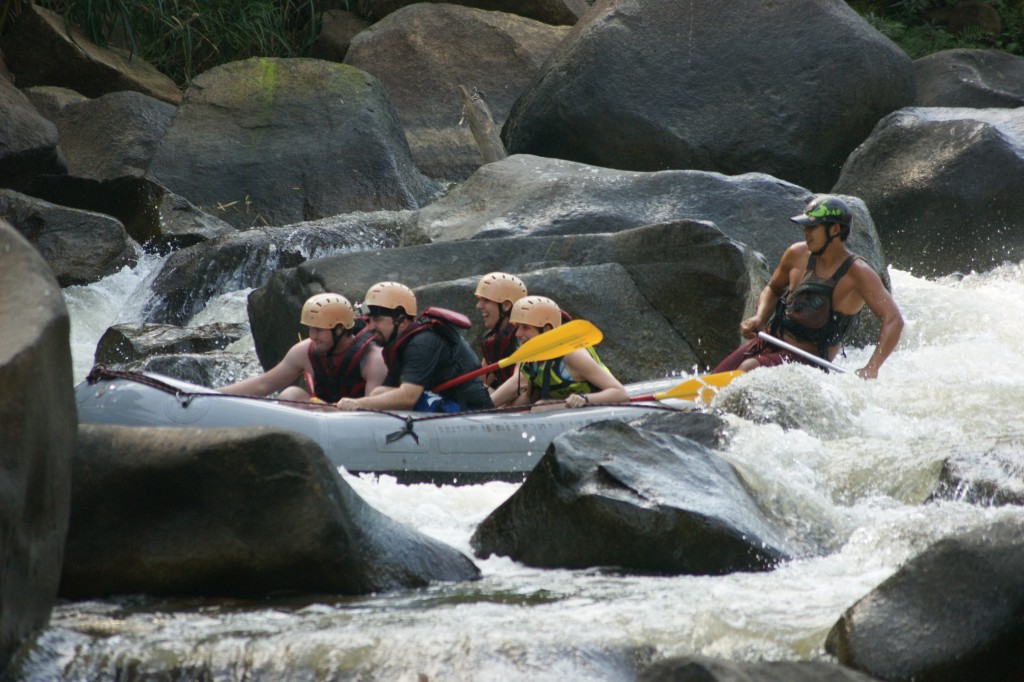 Preparing to go over some rapids 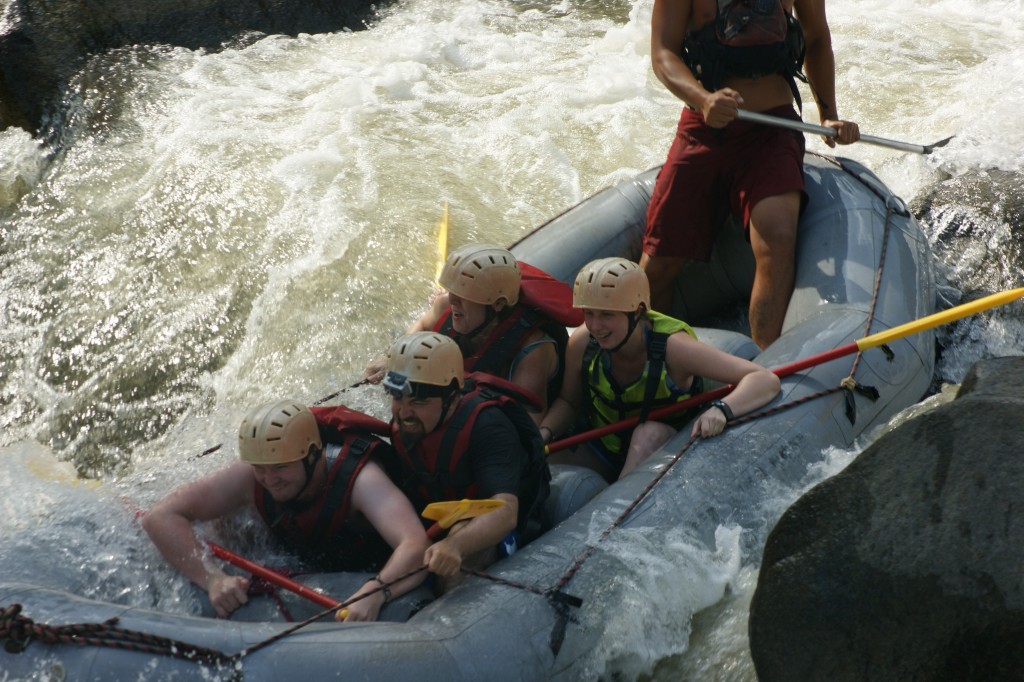 Another one in the rapids 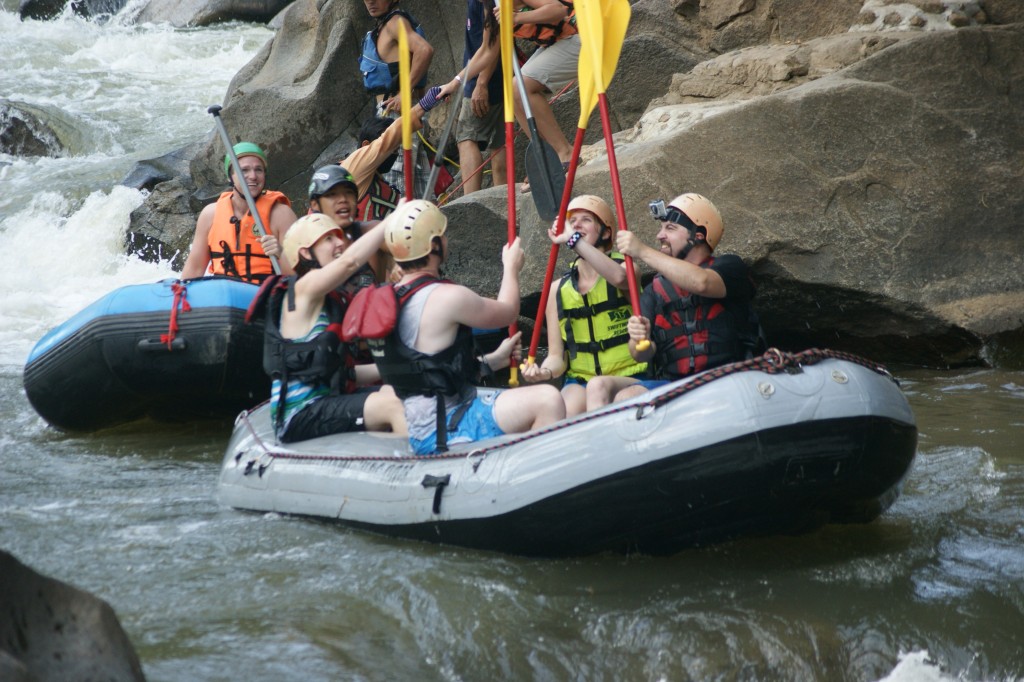 Our boat high-fiving after going through some rapids. 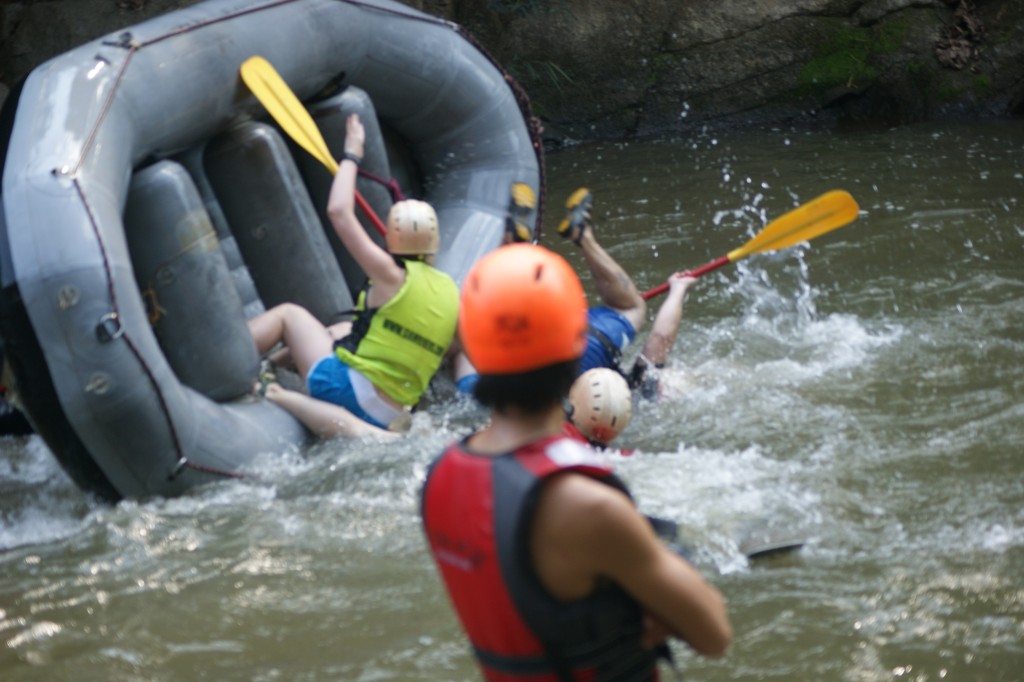 At the very end, another guide tricked us all into leaning far right and then he flipped our raft. They caught this great shot with both of John’s feet in the air while his head was completely under water. My left leg is still on the boat and I’m in the water behind John. Fun day.

We ended up spending more than a week in Chiang Mai and loved it. It took us a few days to get into the town, but once we did we could see why so many people rave about it. Because our 30 day entry visas were going to expire while we were there, we even spent half a day in the immigration office getting extensions. It was a bit of a hectic morning with many different forms to fill out, lines to stand in, and officials at windows to approach, but it all went well in the end and was one of the many, many times on this trip where we were both really happy to have a traveling partner to help with the logistics.

Overall, we stayed longer than we meant to in Thailand, but I think it worked out for the best. By the end of our first five weeks on the trip we were excited for our second country. Next up was getting ourselves to the Thai-Laos border and slow boating it along the Mekong River to Luang Prabang.