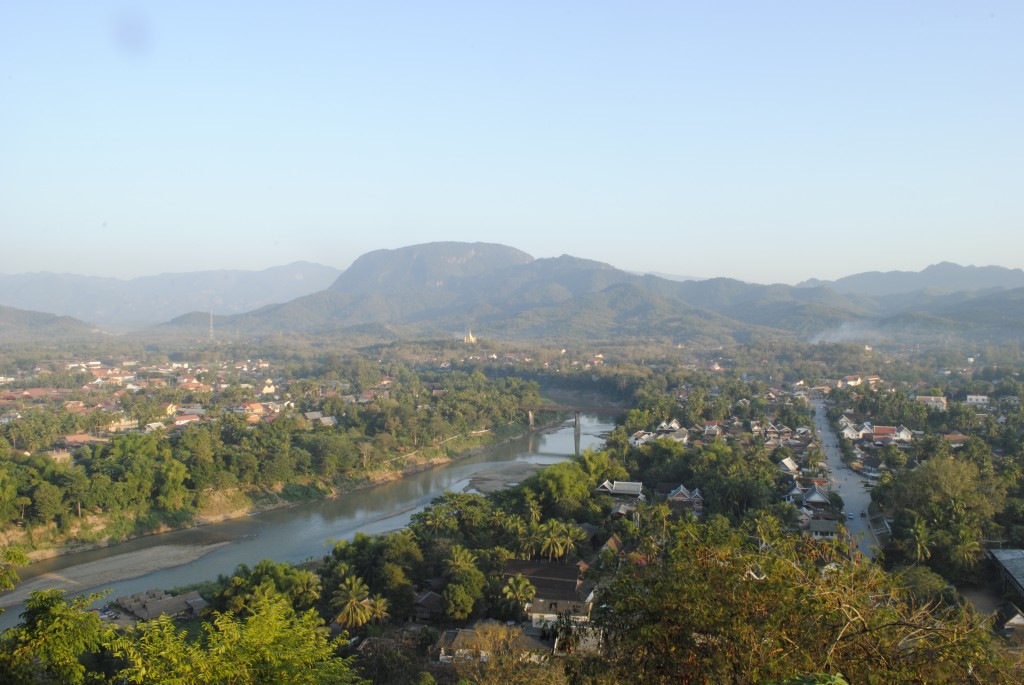 Luang Prabang is a charming little city in the center of northern Laos on the Mekong River. It is nestled in a valley and surrounded by rolling mountains. The Mekong and Nam Khan rivers hug the peninsula of the city on either side. So it has a misty natural beauty going for it, and then when you walk around the Old Quarter of the city, it almost feels like you are going back in time. Or at least like time slows way down.

This was partly due to the fact that Laos is just really different than all of its neighbors. The Lao people are known for being very laid back and don’t like to do anything if there isn’t an element of fun. (This is apparently in stark contrast to their very industrious Vietnamese neighbors.) They are also more religious and traditional than their neighbors. We generally found the Lao people we interacted with to be friendly, but more reserved. On the occasions when we got more insight they did seem very fun-loving. In any case, Laos definitely had a different feel than Thailand. It was far less developed and more rural, less populated, and in general more difficult to travel in than Thailand. For all these reasons, we liked it more.

Sunset over the Mekong, taken from Mount Phou Si

Walking through Luang Prabang also made me feel like I was in a very different place than any I’d been before because there were so many Wats, or temples, and active monks and monks-in-training. It is customary for most young Lao boys to spend some amount of time in the monastery for training. It seemed like this could be anywhere from 7 days to several years, and while some of them stay in the monastery for life, most of them go back out and continue on with the next phase in their lives. It is here that many learn to speak English and get to practice it, allowing them to work in tourism.

You can hardly turn a corner in Luang Prabang without seeing many orange-robed monks walking in pairs around the city. It is a really lovely and peaceful sight. 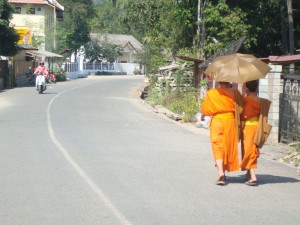 LP is also well-known for a daily ceremony that involves the Buddhist faithful giving alms [often high-quality rice balls] to hundreds of monks who walk around the monasteries every morning at sunrise. It is supposed to be beautiful. Sadly, we read that so many tourists now line up to watch and take photos that locals feel it is ruining their experience. Given this ratio of tourists to monks, we thought watching this ceremony might not hold the same appeal it did a few years ago. 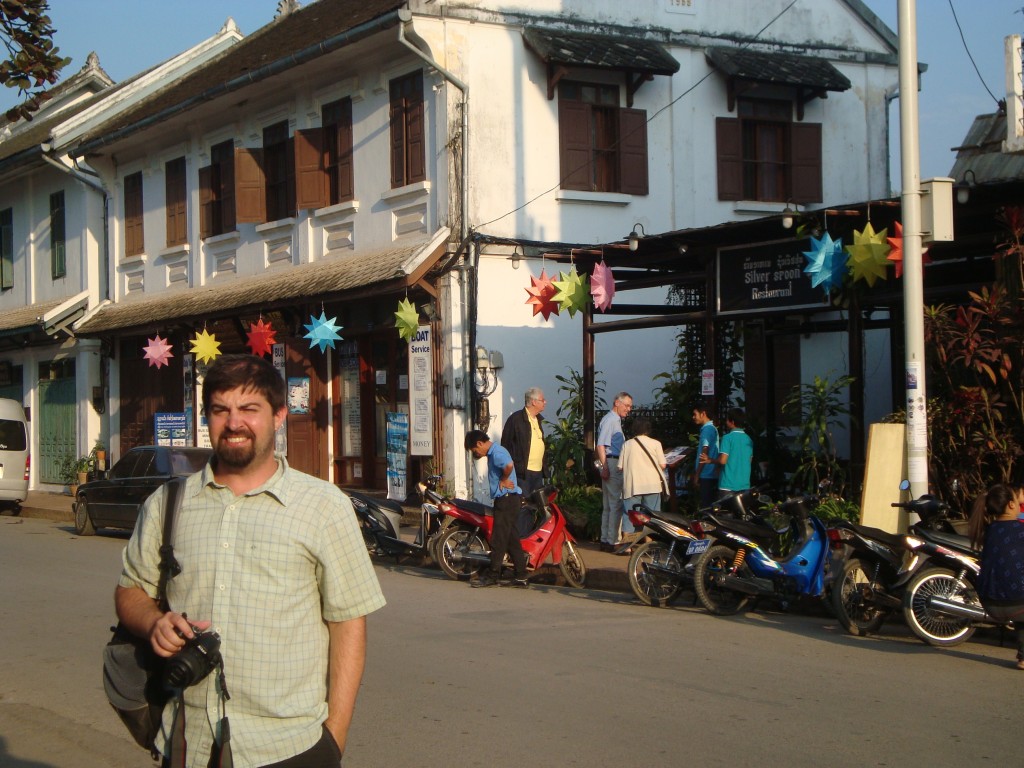 On the main drag of LP. Very cute town with lots of obvious French influence from when from when they controlled it from the late 1890s to 1954. 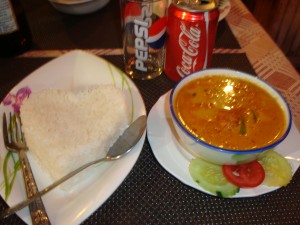 The Indian place we went to a few times served my amazing butter chicken with heart-shaped rice, and my coke with a pepsi glass.

The city is also very charming because most of the buildings are a French colonial style. While thinking about how all that influence originated reminds me of an unfortunate history, it is hard not to appreciate the remnants. I have to admit, I also really loved getting to have cappuccinos and lattes if we wanted them, which was not the norm for us in Thailand. They also had lots of bread in LP, and Laos, generally, which was awesome given they didn’t really have bread in Thailand. A common street food on offer in LP was baguette with Nutella, so naturally, this city holds a special place in my heart. As far as the rest of the food went, we didn’t like the Lao food as much as Thai food, and I guess the best dishes I had were at an Indian restaurant. (My Lao food experience may be jaded by the bout of food poisoning I picked up about a week into our stay, see more below).

There were some interesting culinary experiences, though, like going through a street food buffet which had probably 20-30 large wok-sized bowls overflowing with various Lao dishes. You could fill up one plate (no seconds) for about $1.25. But, as with everything in SE Asia, there is always something unexpected in every transaction. In this case, after you went through and carefully picked out the food you wanted and precariously arranged it on your plate to maximize the food you got on your one trip, but also to keep things that had really different sauces from mixing too much … well, then you hand your plate to the the woman running the buffet to pay, and she then dumped it all in a heated wok and mixed it up in order to warm up the food! So, that was a bit at odds with actually tasting anything in particular, but it was a pretty good smorgasbord and for that price, what a great deal! 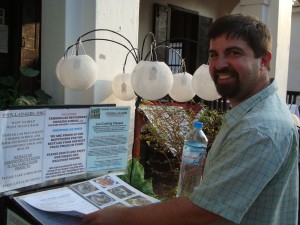 One of our daily activities, looking at menus and finding food.

I really loved LP, but it was also here that John and I got several different types of sick, including a nasty head cold for me, a more mild cold for John, our first relatively minor stomach issues throughout our stay, and then a majorly bad case of food poisoning for me. Suffice it to say that all is well that ends well, and after several hours of feeling about as sick as I can remember, John convinced me to take a Cipro and the worst of it was over soon after that. (In case you are wondering, this was several days after the street food buffet, so that wasn’t the culprit. I think it could have been some sliced fruit I ate at our hotel breakfast, but who really knows.) I still wasn’t able to eat or do much of anything for a few days afterward, so we lost some time in LP, and I think John got a little bored there. He got out a bit on his own, but mostly we just slowed down and did a lot of reading and recovering and listening to the rats scurry around in the ceiling of our rustic bungalow. I guess doing not much of anything was kind of appropriate for such a lazy-paced city. There were a few things I really wanted to do before leaving, so we ended up staying longer than planned to fit everything in. 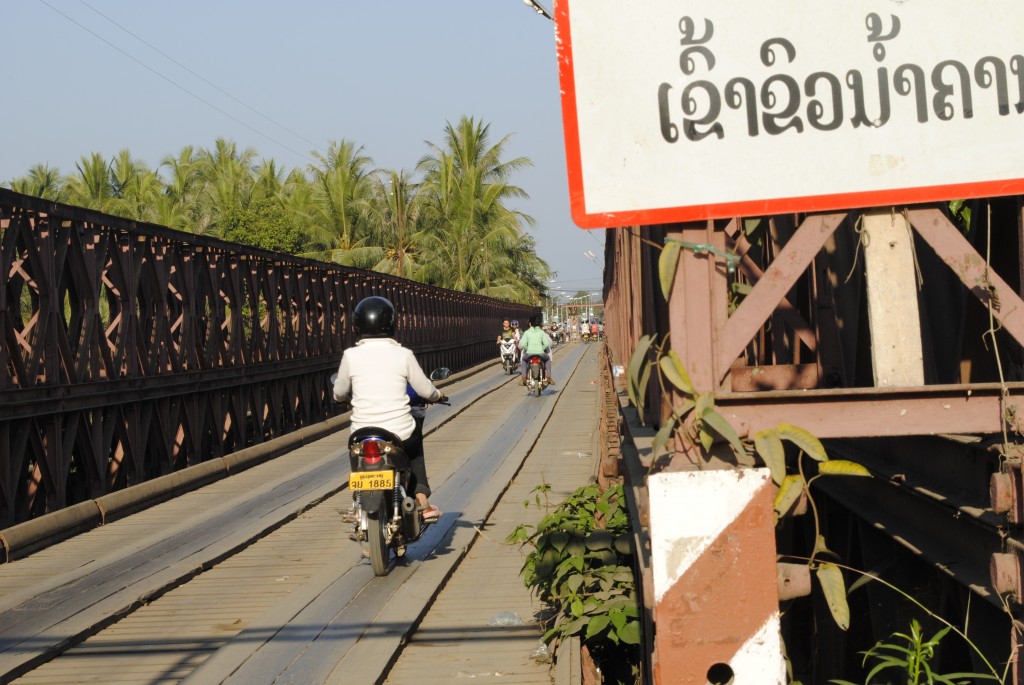 We were staying right across this bridge, which only allowed motorbikes and bicycles. We rode our bikes on it once and it is harder than it looks to stay on the plank! There was a pedestrian walkway on the side, see below. 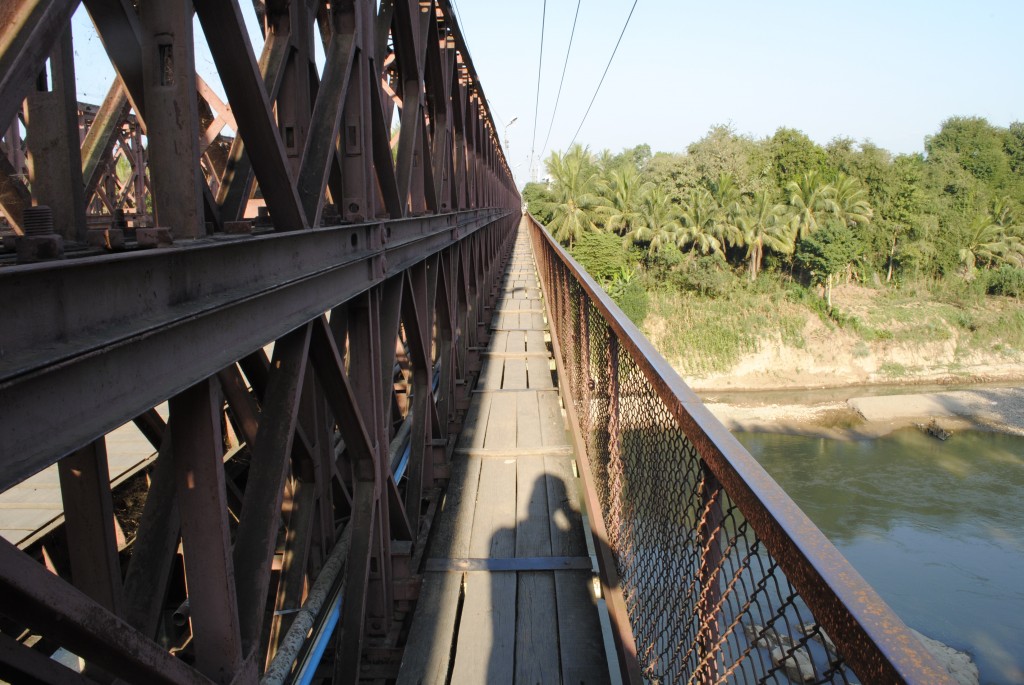 This is the pedestrian walkway on either side of the bridge. The boards weren’t all nailed down or even, so there was a lot of banging around when you walked. And, it was pretty high over the water below. It was mostly fine during the day, and pretty terrifying at night because you couldn’t see very well.

Alternatively, we could get to our place by walking over a bamboo bridge that was rebuilt every year after it got washed out during the rainy season. It may have been rickety, but at least it was well lit! (Unlike the other bridge) 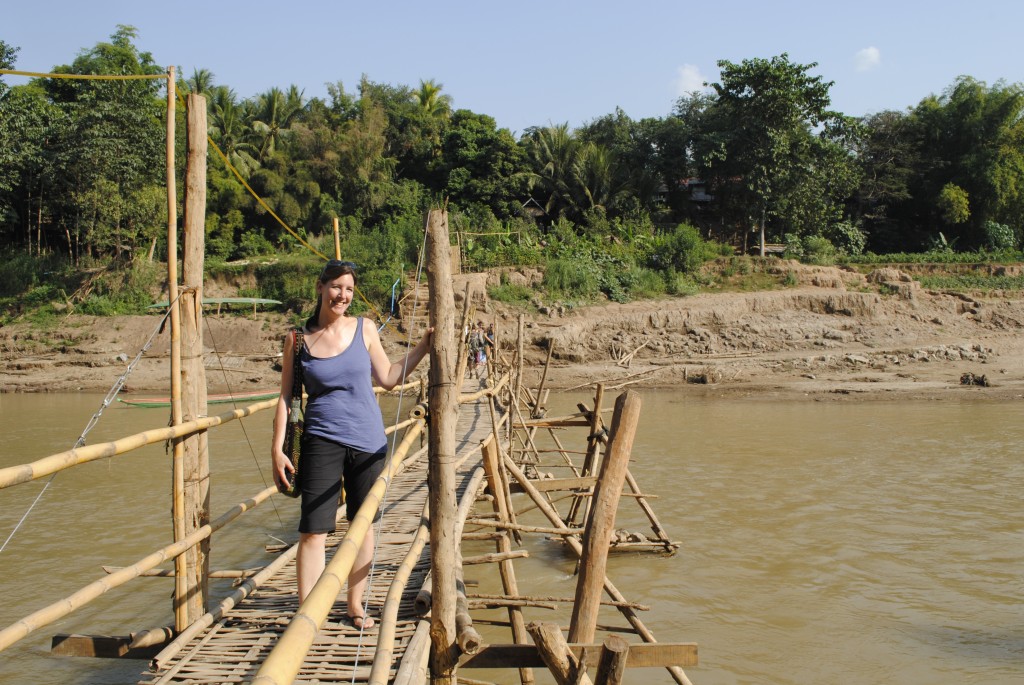 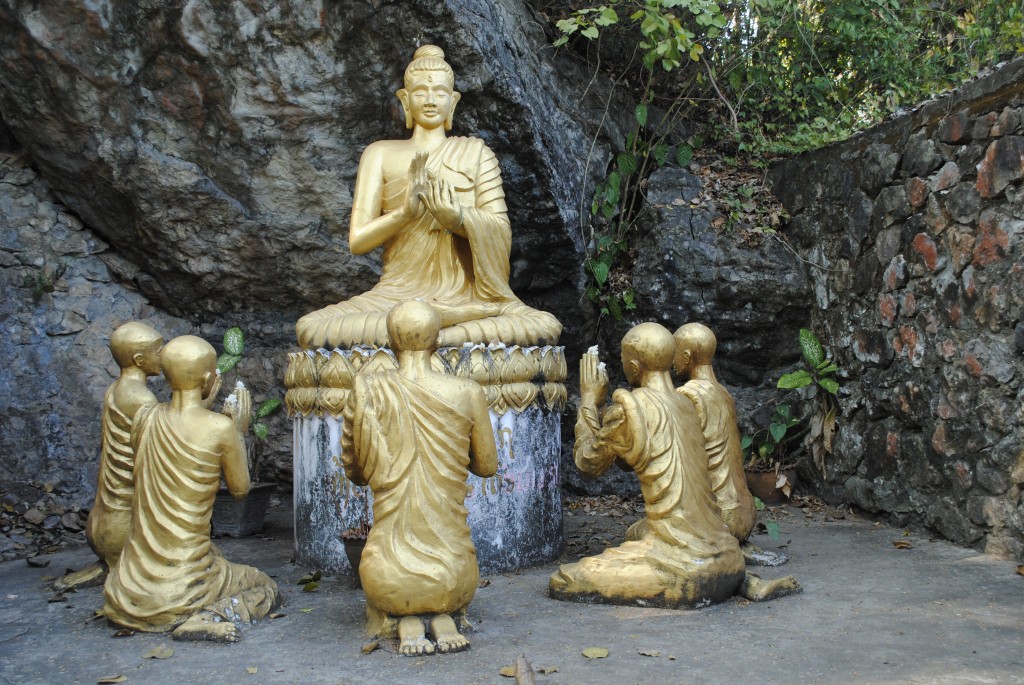 Statues on Mount Phou Si in the center of town 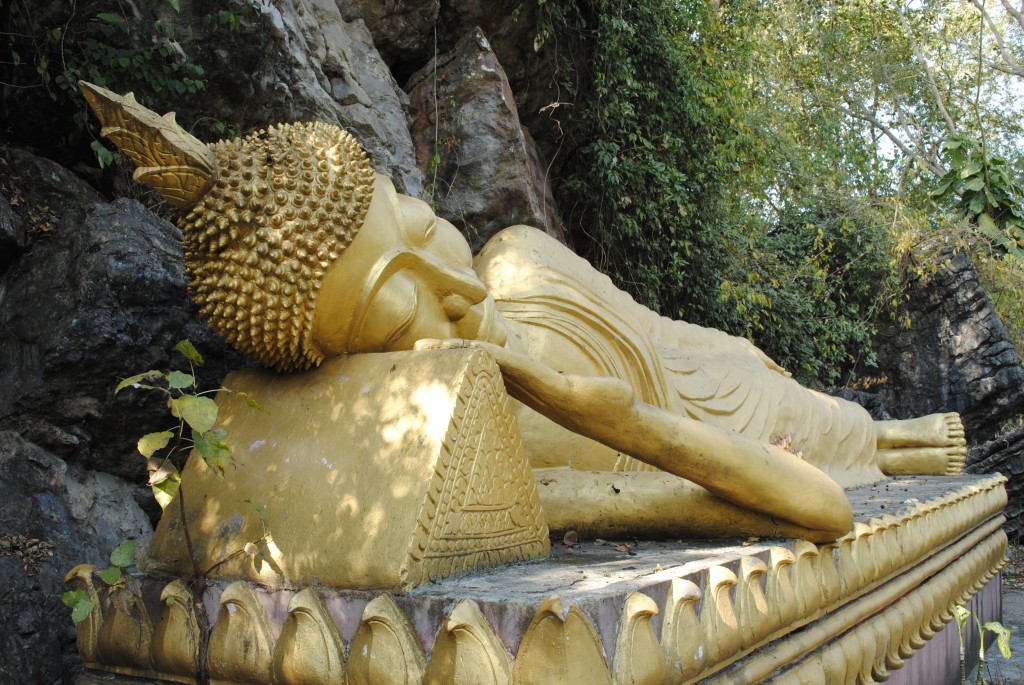 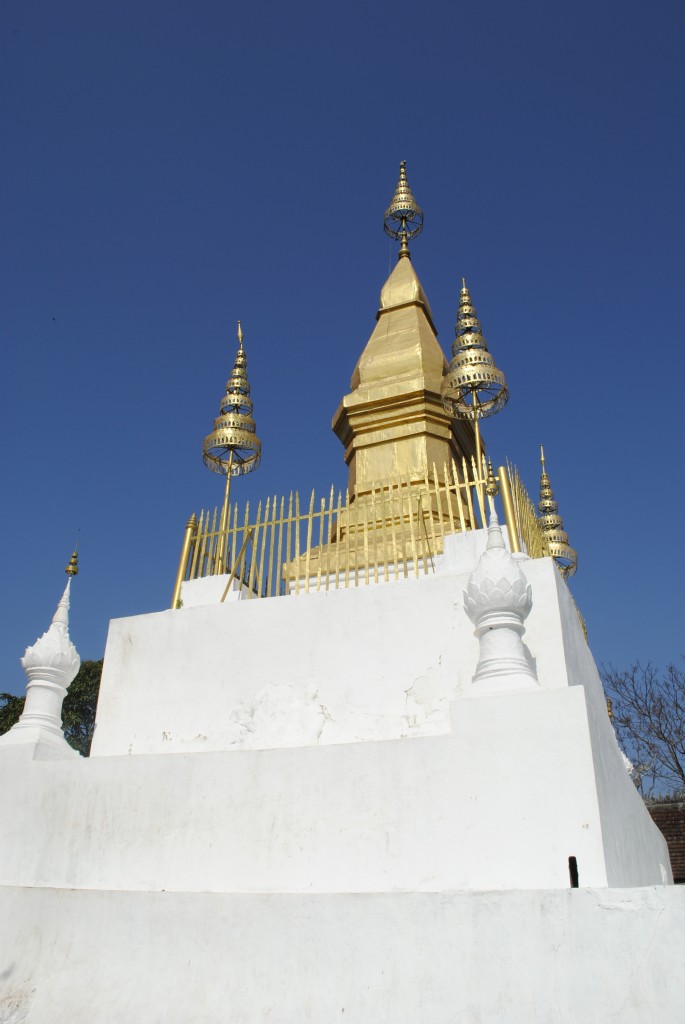 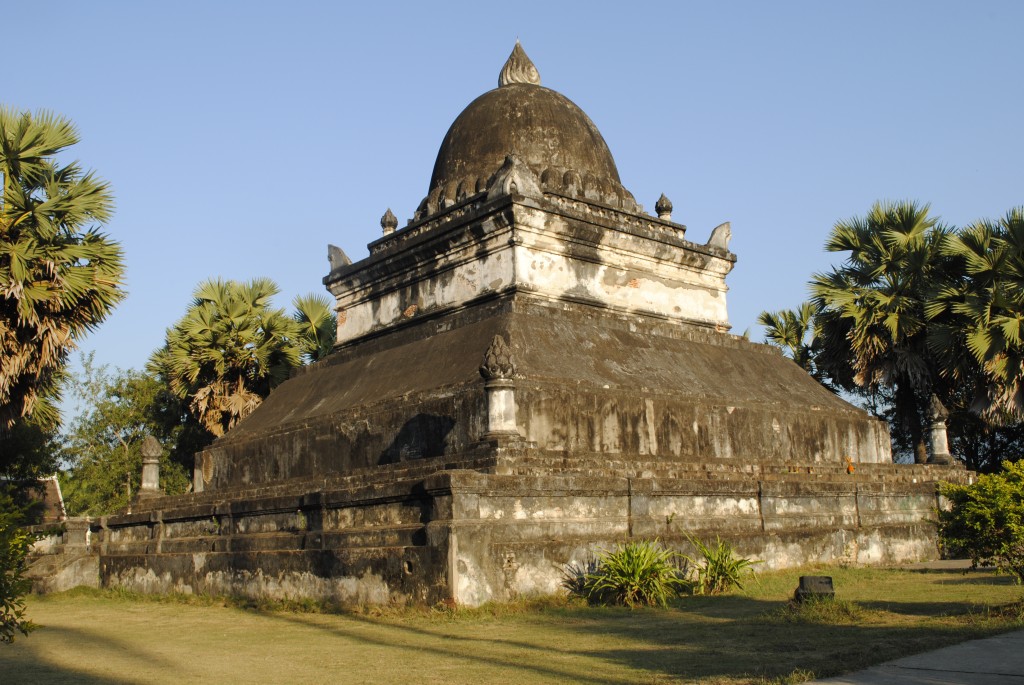 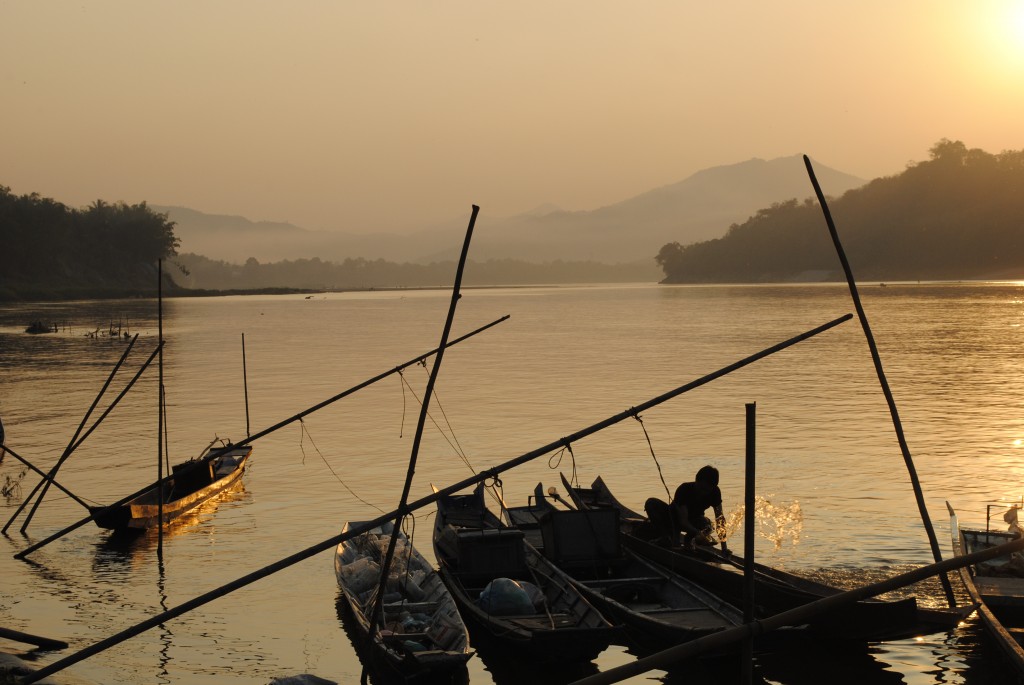 Sunset on the Mekong 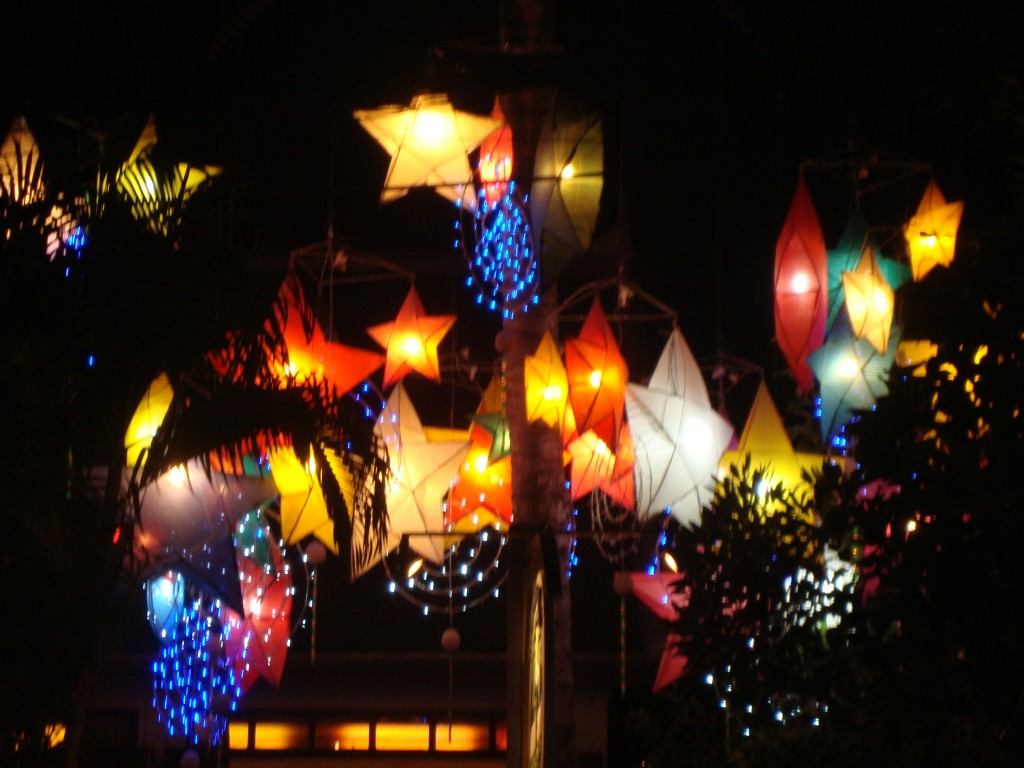 Lanterns in the courtyard of a restaurant

Top of the tents making up the night market. The center piece of the town every night and a great market for shopping! 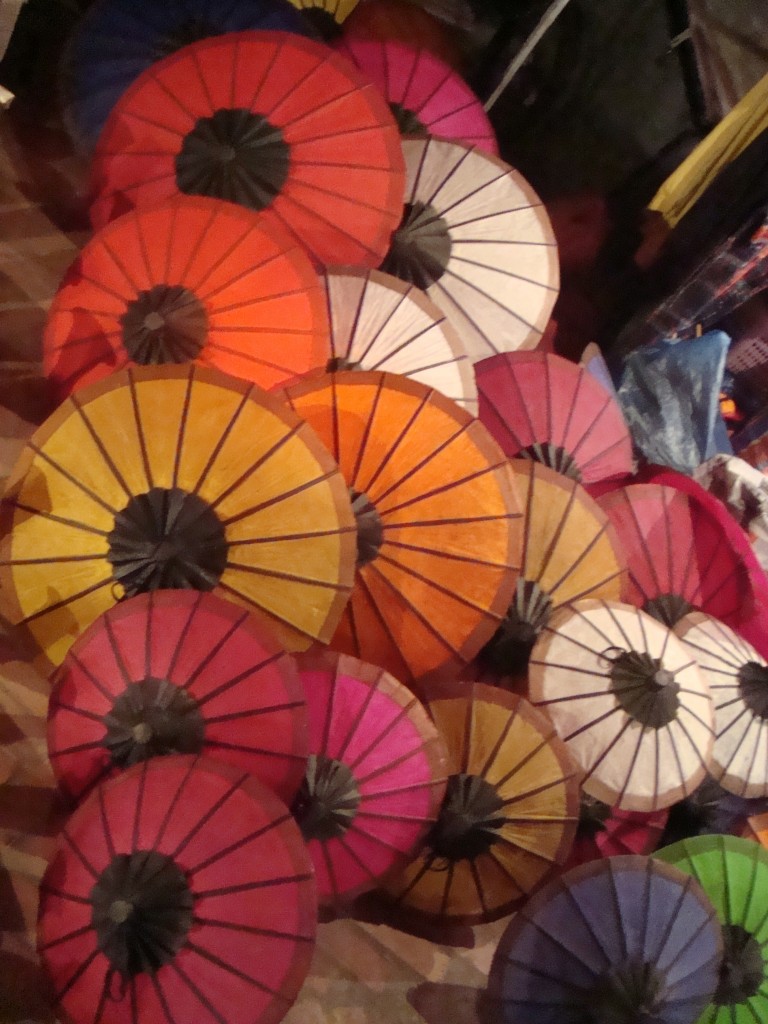 umbrellas for sale in the night market 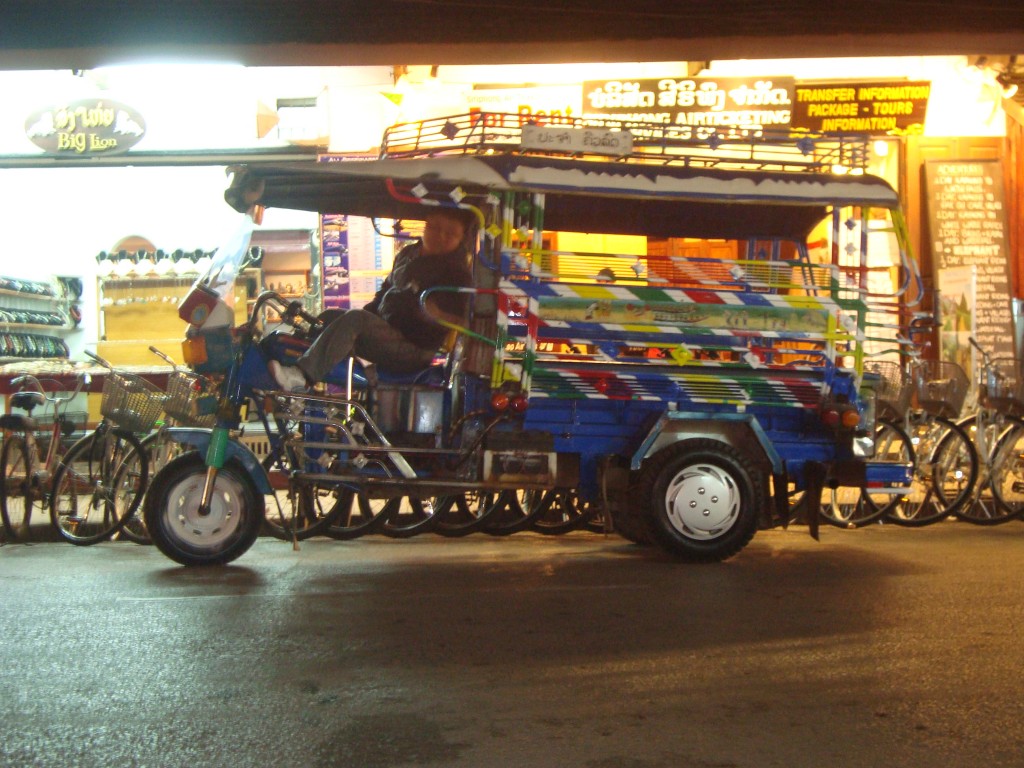