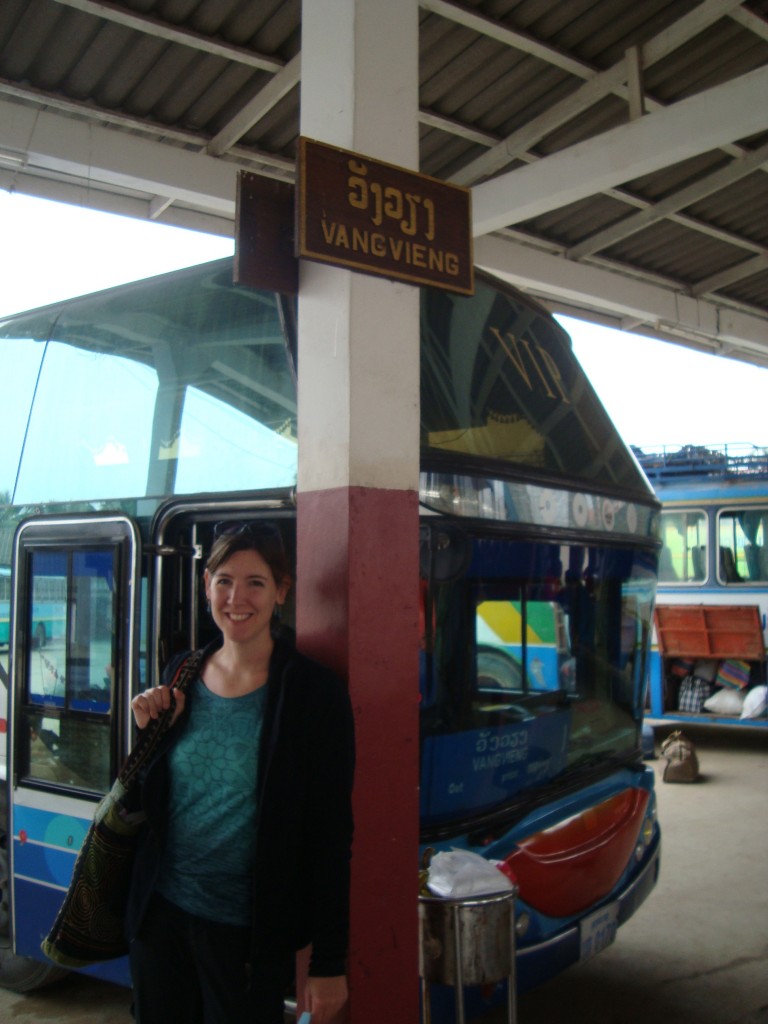 It’s about 100 miles from Luang Prabang to Vang Vieng. Most of it is through rugged mountains, looping back and forth along high ridge lines and around immense limestone karsts. So the 100 miles takes about 6 hours.

View along the route from Luang Prabang to Vang Vieng. This was probably our most harrowing bus ride yet. 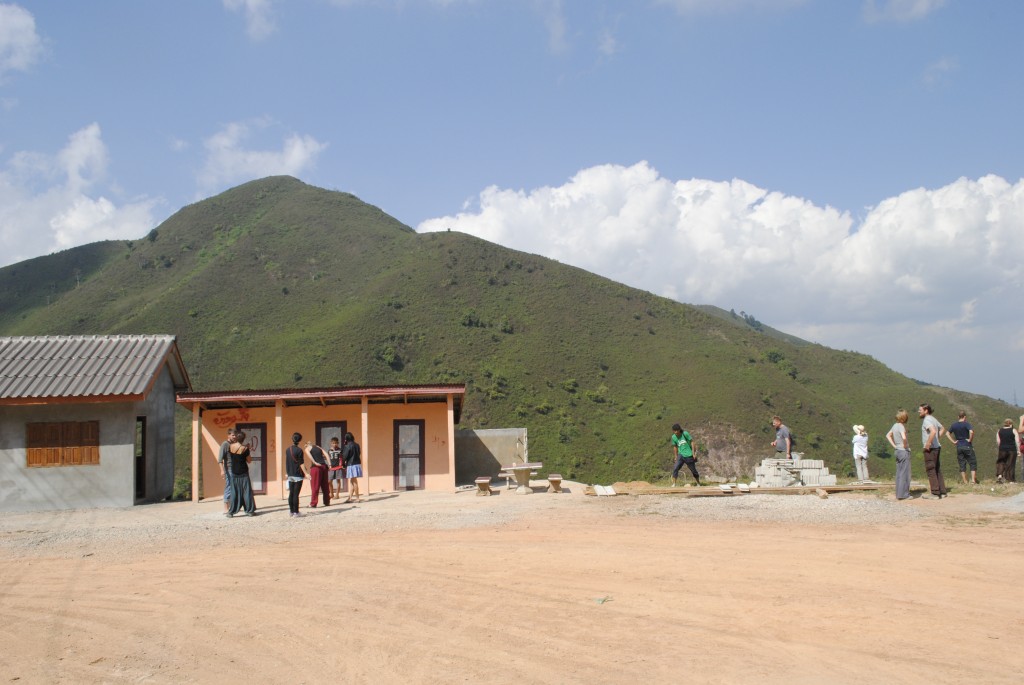 Bathroom break on our bus ride from LP to VV

Vang Vieng sits on the Nam Song river, a beautiful stretch of clean, cool water that flows at the feet of large karst mountains. Rock climbing is becoming a major business and there are quite a number of caves to explore. It also has a reputation for being a party town. If you’ve heard of bars where episodes of Friends or Family Guy play on endless loops and dazed backpackers stare on inebriated – this is that town. Or at least it was. Over the last decade tubing down the Nam Song river has become one of the main draws of the backpacker set. Run by a collective representing each of the towns in the area, a good deal of the money actually goes back to locals. It starts about 7km outside of town and up until this summer, most of the route was lined with bars, dancing platforms, rickety zip lines, rope swings, and “water” slides. Mix in a liberal drug policy and you can see why one of the largest concrete slides was nicknamed, “the slide of death.” But after 20 deaths in under a year (and perhaps the untimely death of an official’s niece), in September 2012 the government came in and literally tore down all the bars along the river.

The town’s reputation was enough to keep it off our list but after talking with some fellow travelers and hearing about the changes, we decided to give it a try. Tubing down the river on our first day was the perfect combination of laziness and sightseeing. On our second day, we decided to go slightly farther afield and rented motor bikes to go explore the caves dotting the surrounding area.

Sunset over the Nam Song river the night we arrived 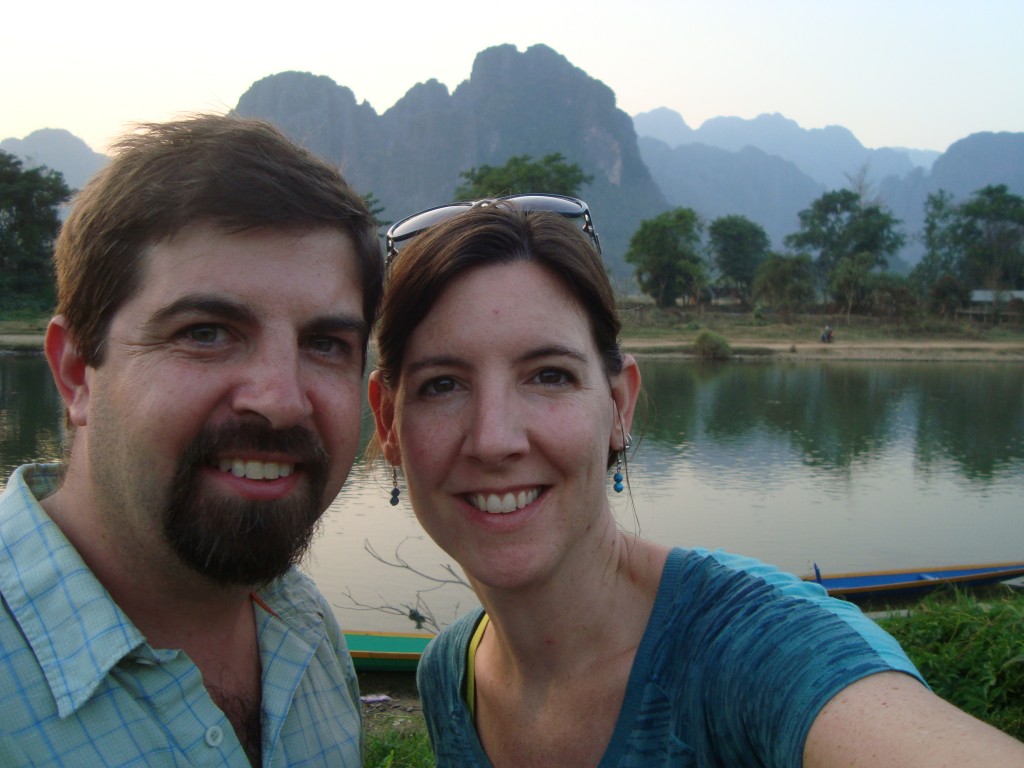 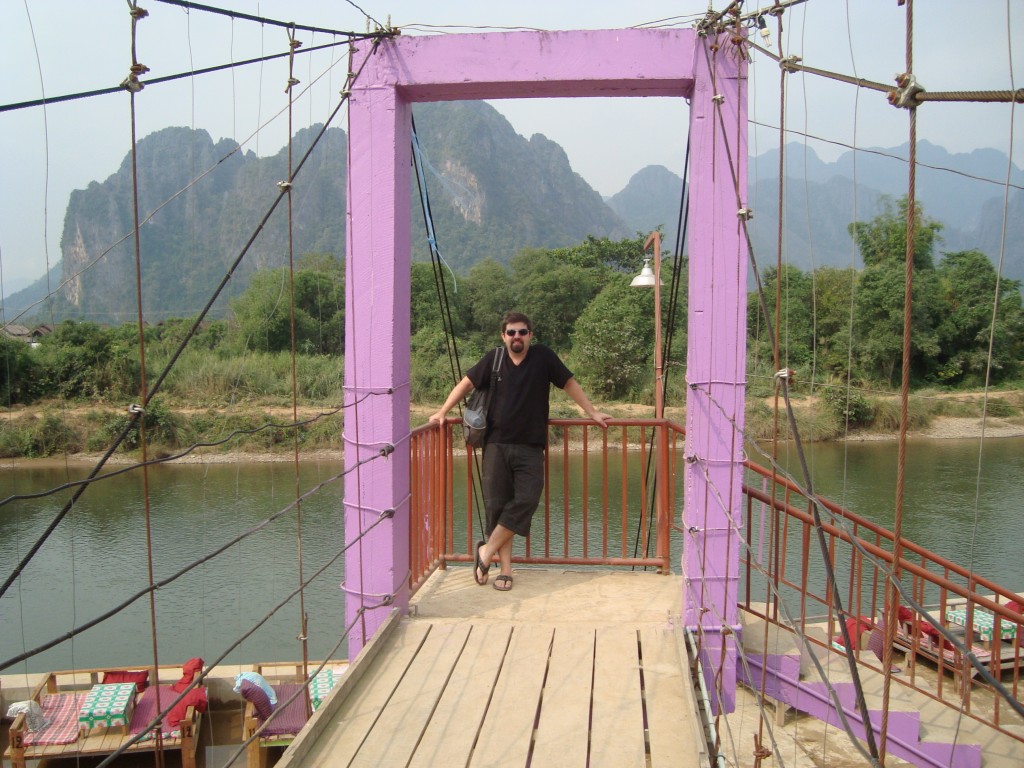 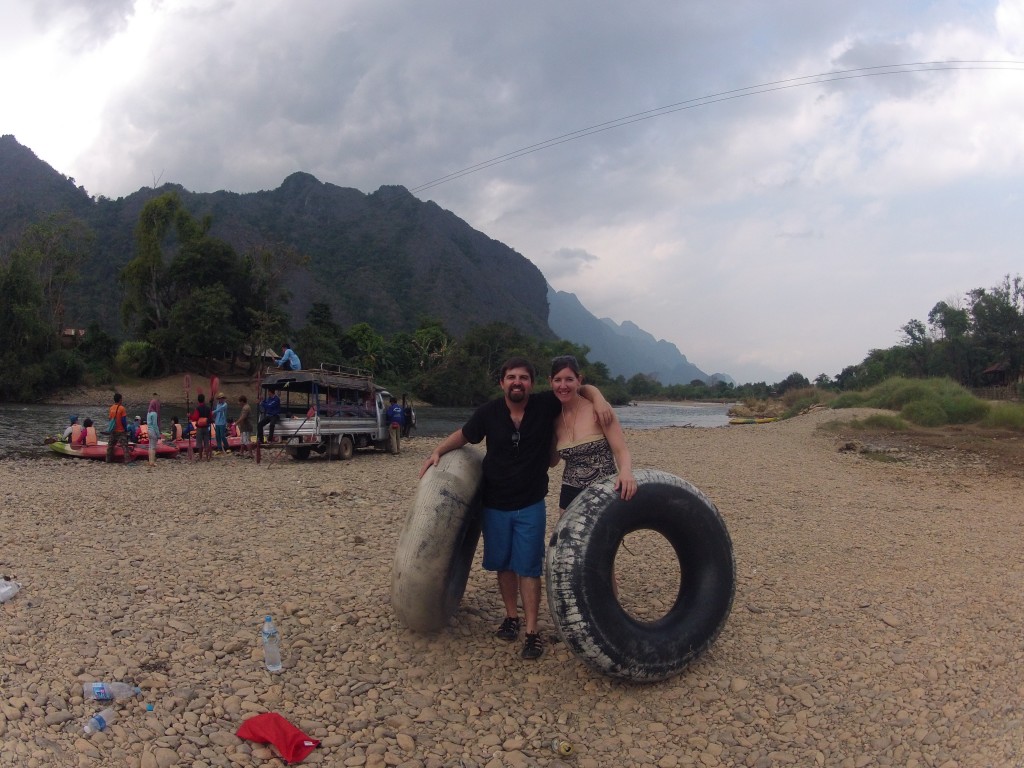 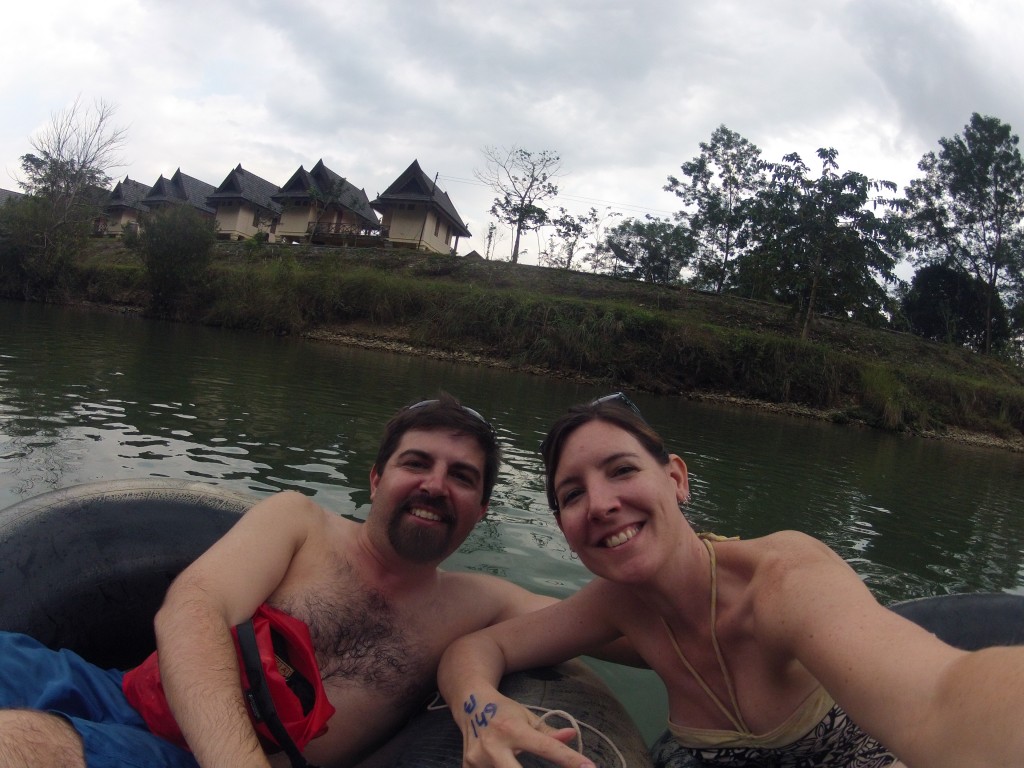 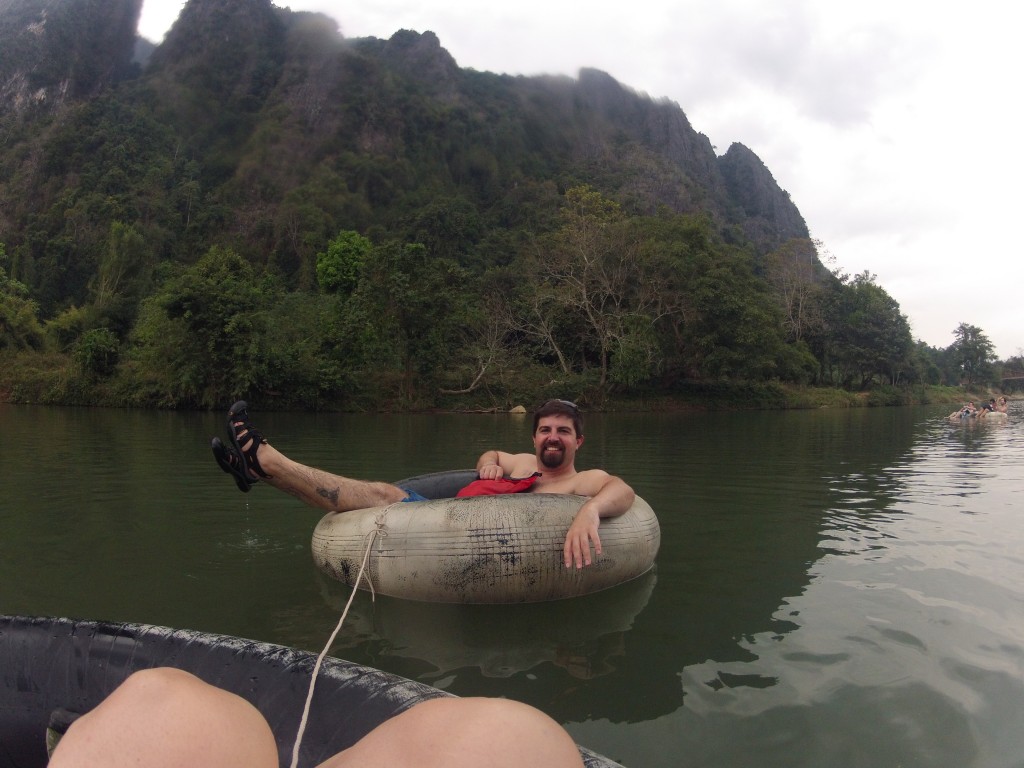 Getting ready to climb lots of steps to see Xang Cave, just on the edge of town 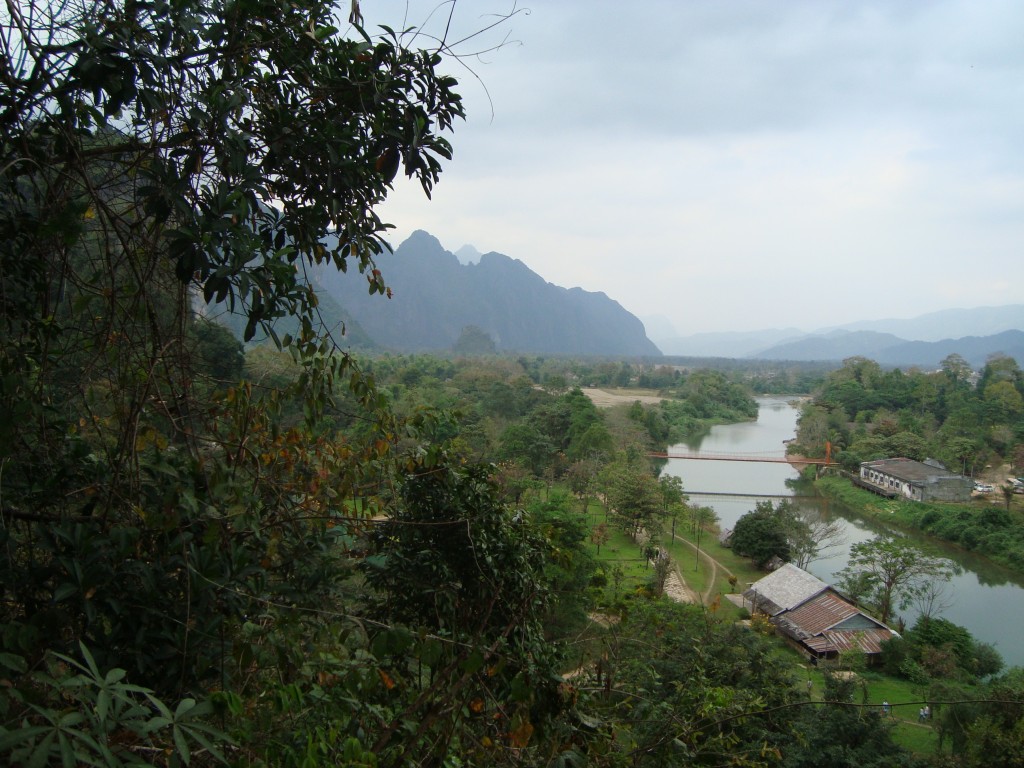 View from the top of the steps at Xang Cave 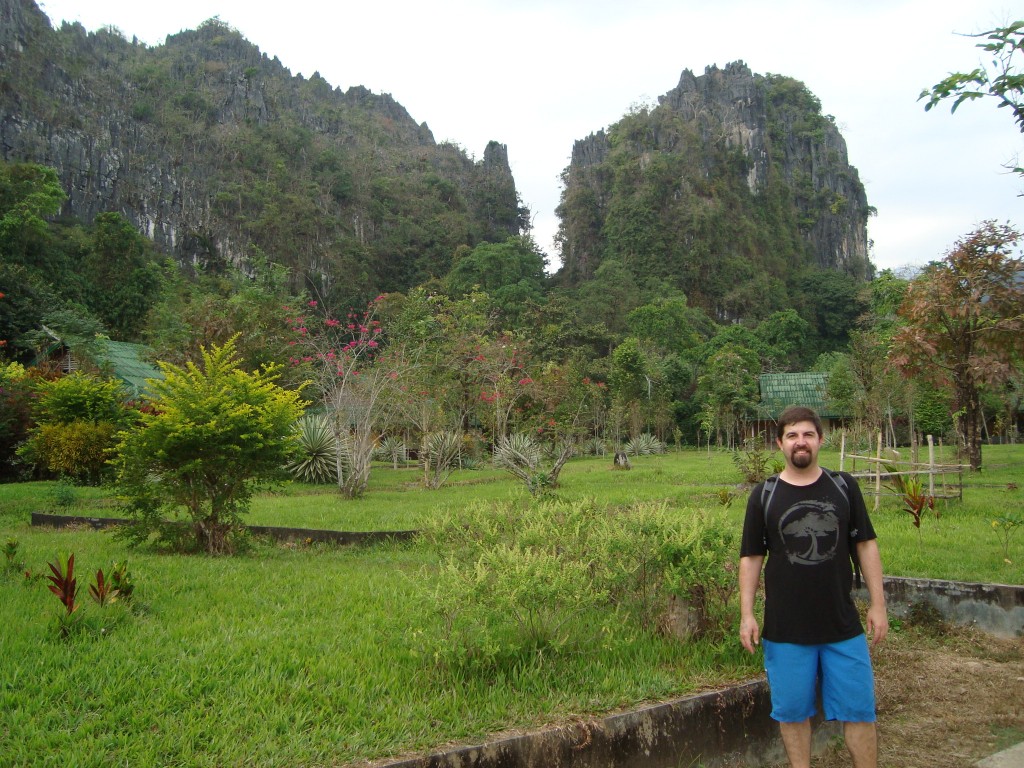 At the base of the stairs to Xang cave 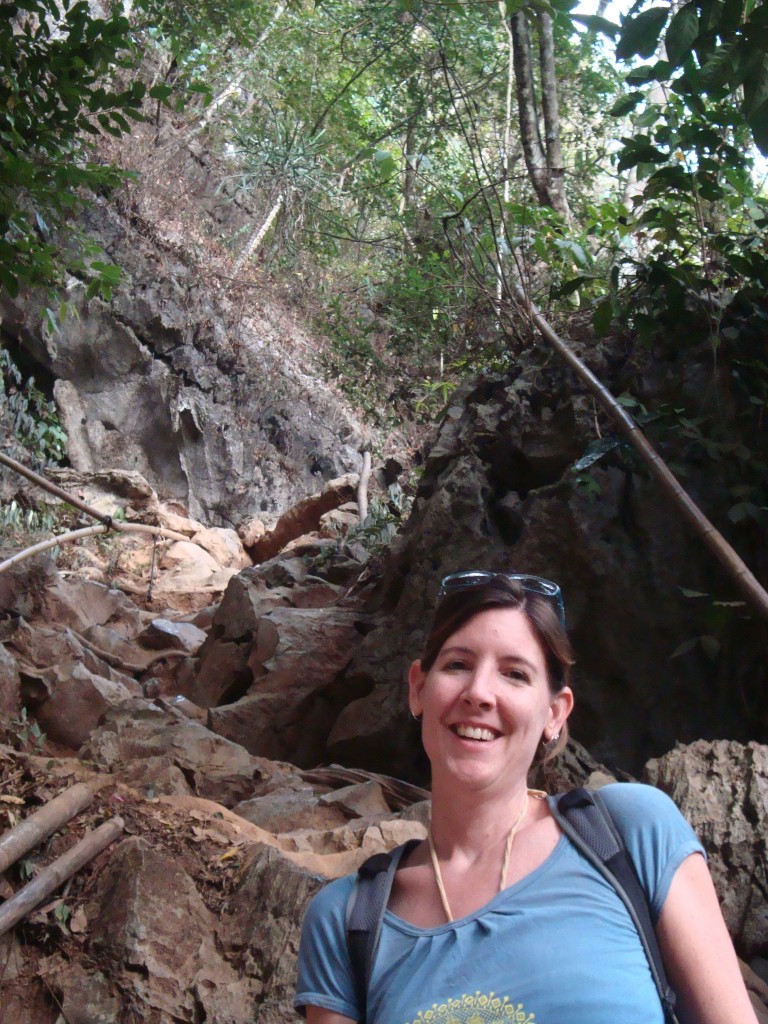 In the middle of a MUCH more strenuous climb to the second cave outside of town, Tham Phoukam 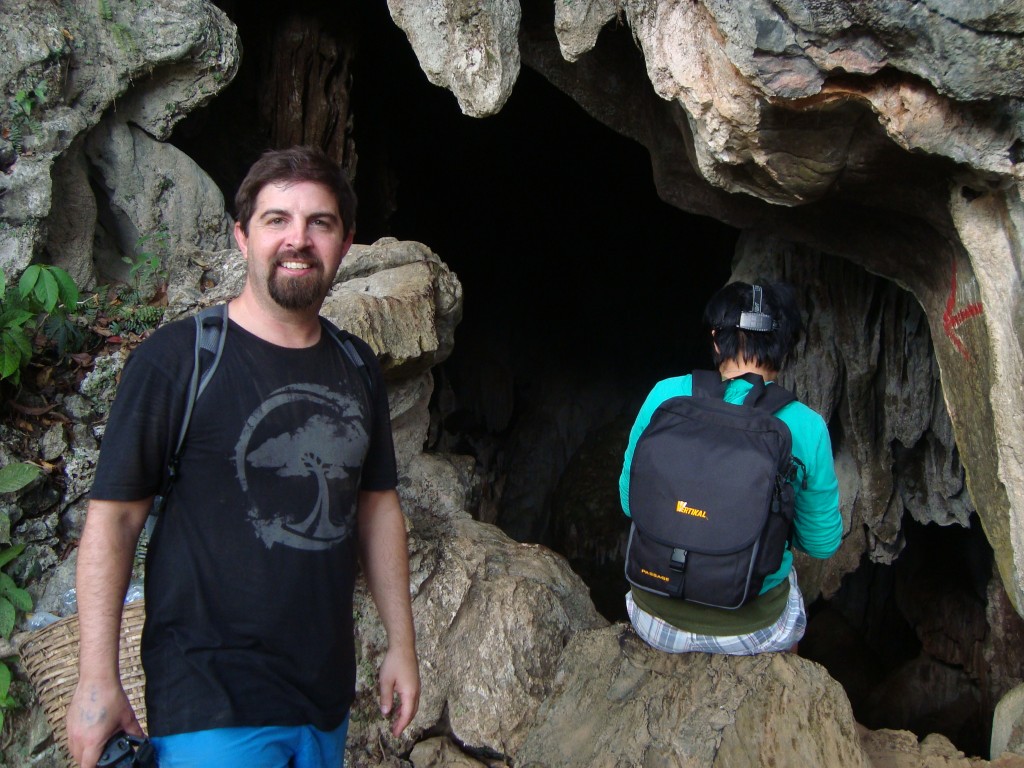 At the mouth of Tham Phoukam 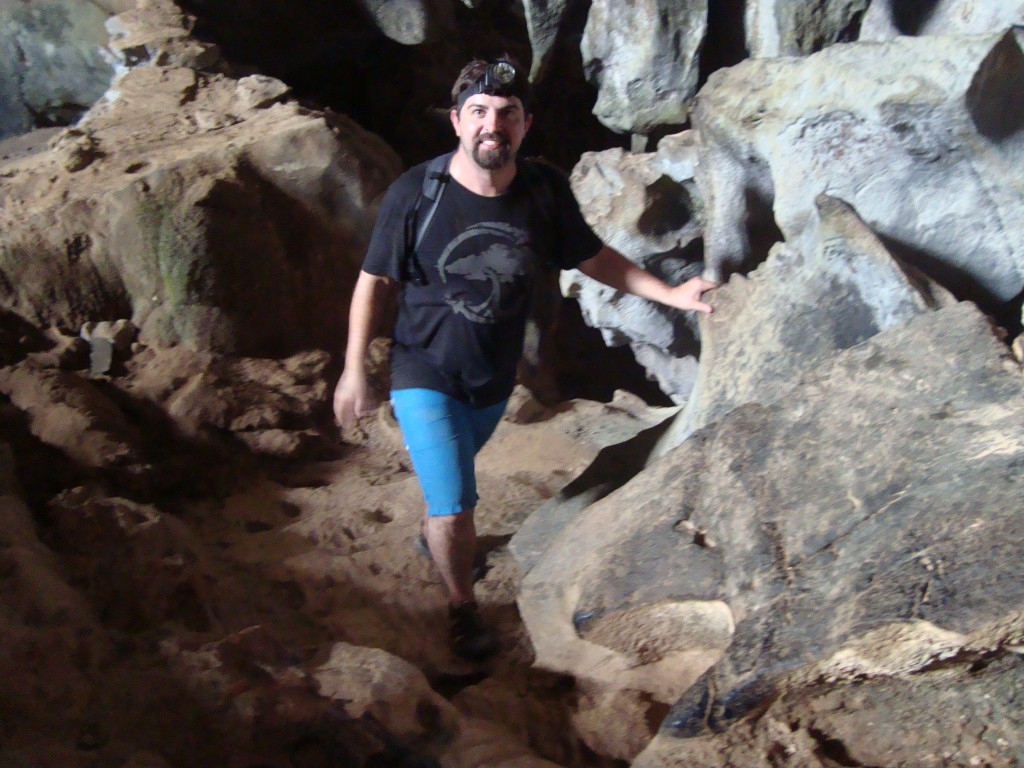 Decked out in the headlamp 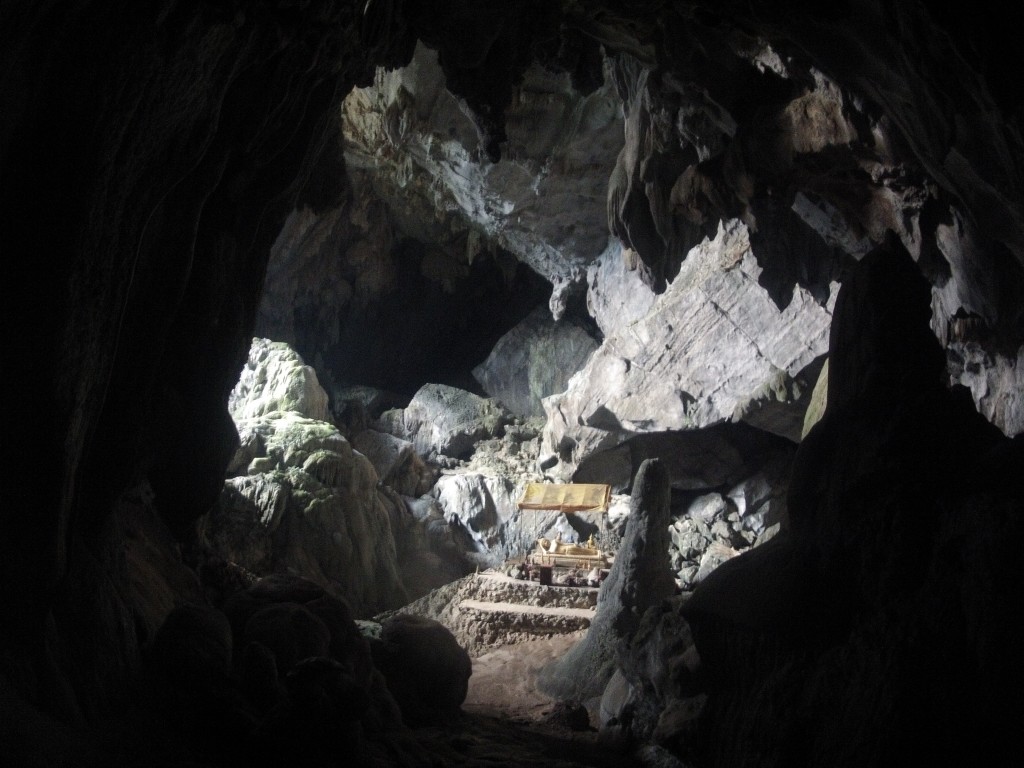 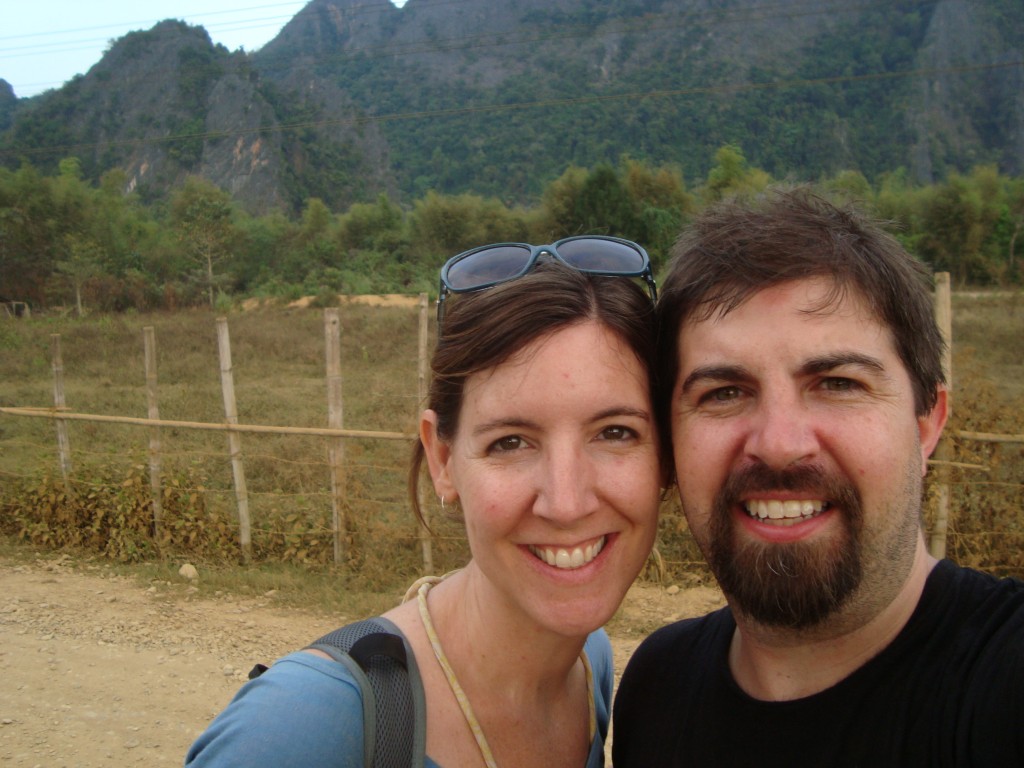 Taking a photo break on our motorbike ride back into town 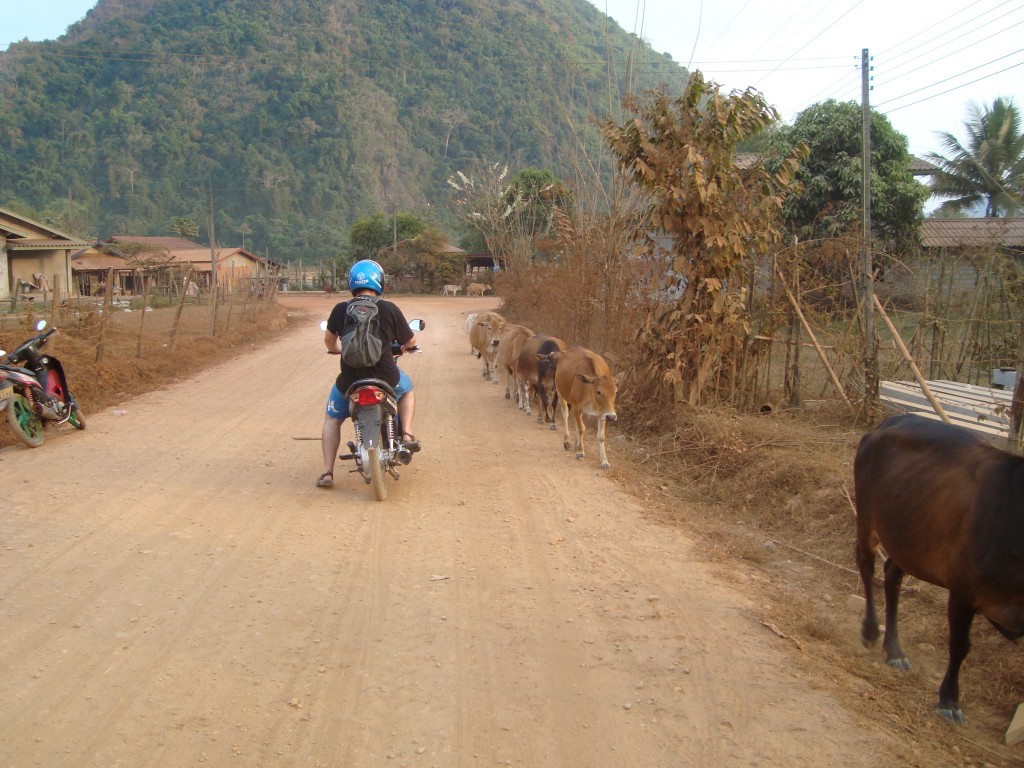 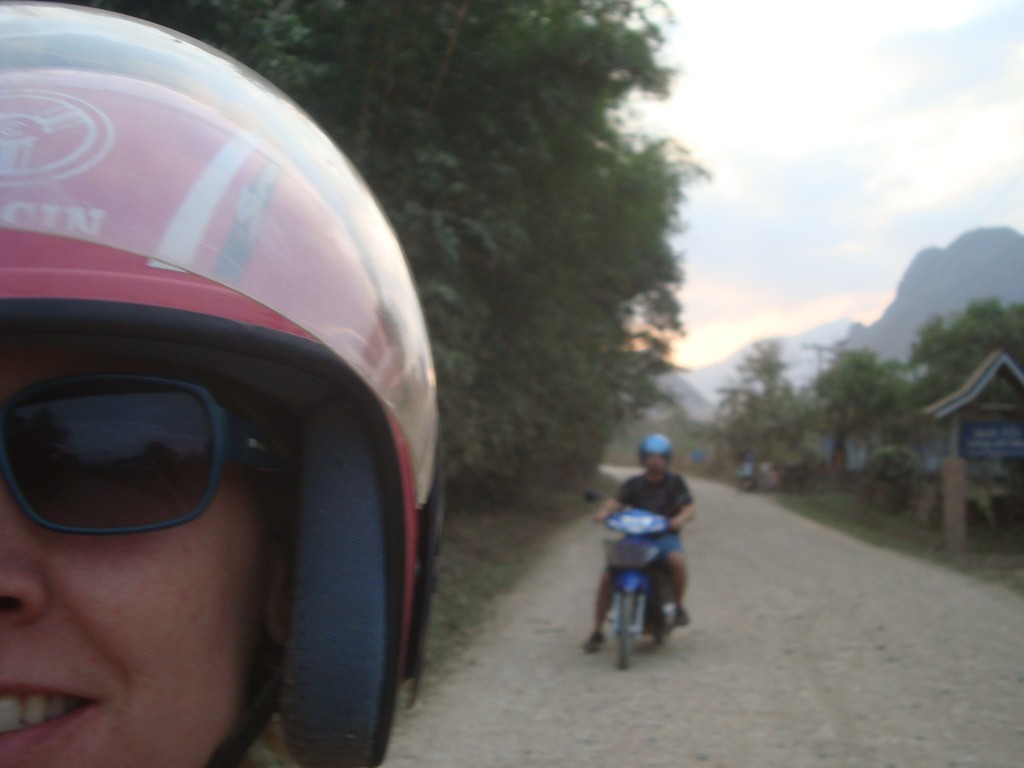 Don’t worry Mom, I was very careful when taking photos while driving!

A few more scenes of the river, in the morning 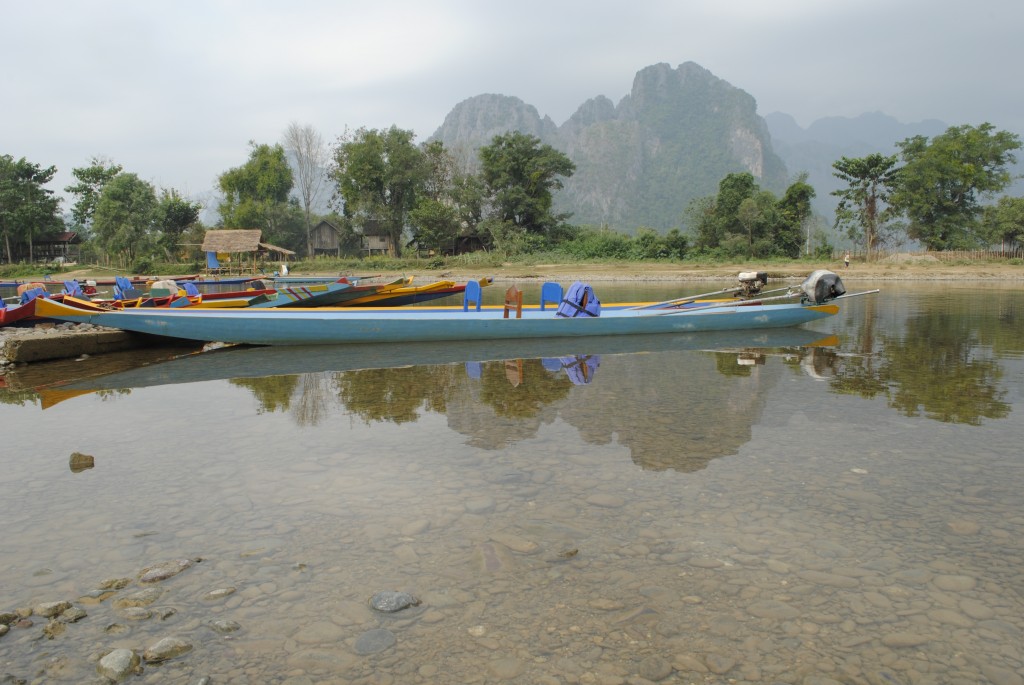 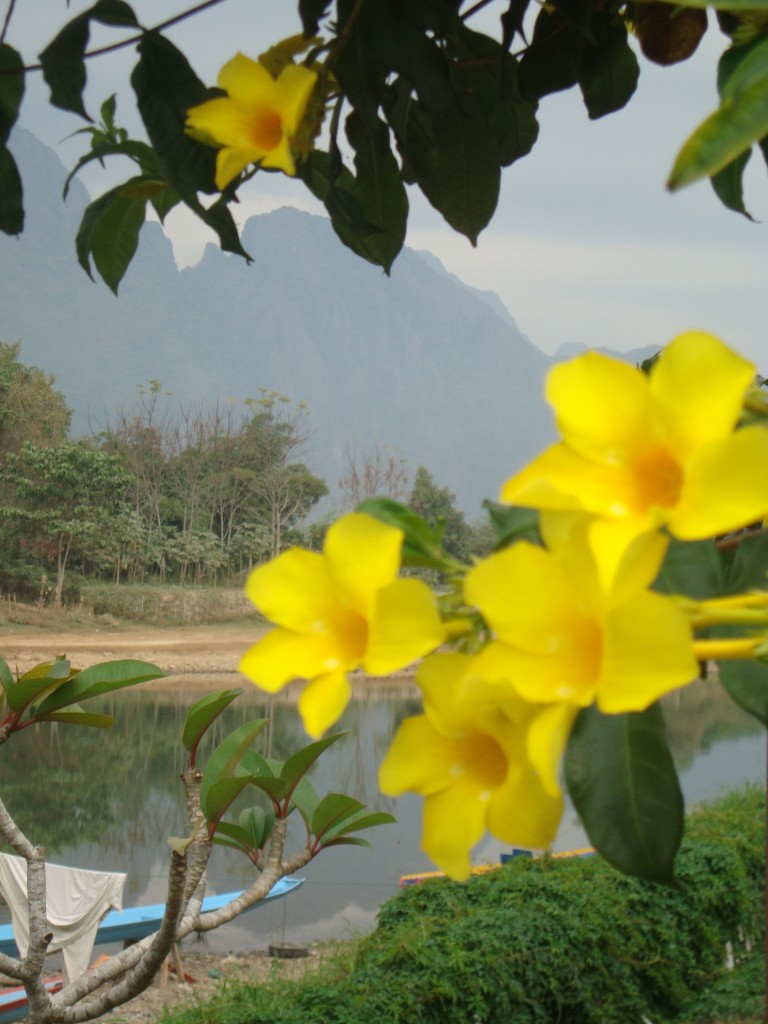 One thought on “Exploring in Vang Vieng, Laos”