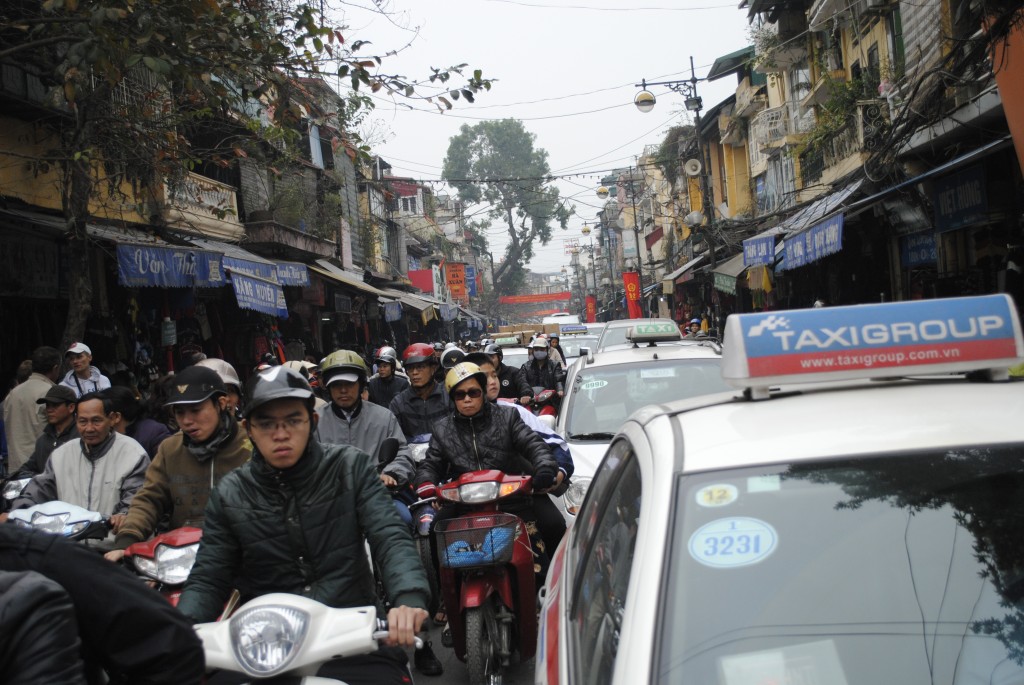 In order to get to Vietnam, we decided to forego what sounded like a 30+ hour bus ride and a difficult border crossing and took a one hour flight from Vientiane, Laos to Hanoi, Vietnam.

We’d also read a lot and even heard firsthand stories about Hanoi taxi scams (especially at the airport), so we arranged for a taxi pick-up through our hotel. After waiting about an hour for our driver we were worried he was not going to show. Another nice taxi driver noticed our anxiety and walked up to help us. Using charades and props, he pointed to his phone and we showed him the number of our hotel and our names. He presumably called our hotel and confirmed that a taxi was on the way.

Shortly after that, a taxi driver came running up to the guy who made the phone call and then came over to us. I have to say I was very unsure whether he was really our driver or if this “helpful” guy had called a friend to either help us out and get the fare, or, to scam us. Anything seemed like a possibility. So, we had a very unclear conversation (still no common language) with the new taxi driver, but we didn’t really know what else to do so we followed him.

Not really even waiting on us to decide what to do, he quickly grabbed my back pack and put both straps on and took off walking very quickly outside the airport. It didn’t necessarily feel like he was trying to lose us, but he certainly wasn’t paying attention to whether we were still behind him and we actually had to run to keep up with him. We wouldn’t have thought it so weird if it was a short walk and we weren’t already nervous something wasn’t right. We were really going quite far from the airport and we kept yelling to get his attention and ask him to confirm he was from our hotel, but he ignored us and just kept fast-walking away from the airport and passed all the cars lined up outside. It is fair to say that my suspicions are escalating at this point. 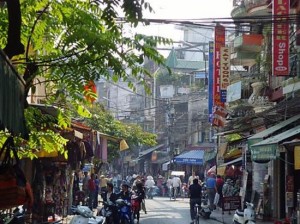 Finally, we got to a taxi where someone else was idling behind the wheel, and I immediately worried that he was going to throw my bag in and speed off without us. So, naturally, I aggressively grabbed my pack from him and made sure that didn’t happen. Once in the taxi, we took some deep breaths. Of course, we’re still not sure this guy is the one we arranged, but at least we’re in the same taxi as our bags.

After a short drive, we did a quick U-turn at an opening of some concrete barriers in the middle of the road. This was confusing, but again we have no idea where we are and which direction we should be heading. We then drove back past the airport and where he picked us up and started to pull over into a dark, empty, gravel parking lot with a closed fence around it. At this point, I’m mentally freaking out with visions racing through my head of being mugged and stranded deep in this empty parking lot. The car stopped at the gate and in a flash of activity the driver hopped out and ran across the street, our guy crawled over to the driver’s seat, turned the car around, and we were driving off in the other direction again.

Ok, that could’ve gone so much worse and now we’re breathing more calmly. I’m happy to report that nothing else happened and we made it to the hotel just fine. To summarize what actually happened here: the ‘helpful’ taxi driver who made the phone call for us at the airport was, in fact, helpful. Our taxi driver was really late to get us, so he had a friend of his who works at the airport sit in his car in an ‘illegal’ parking spot so he could run in and find us. But then he couldn’t drop him off in the correct spot without backtracking because of the concrete dividers in the middle of the road. Really not a complicated scenario at all, unless you are arriving after dark, tired, unable to speak a word of the language, and on guard against nefarious taxi drivers from the beginning because your head is full of stories of scams. To be fair to us, there was a lot of weird and confusing stuff that happened here, and I’m sure there truly are some terrible taxi scams. I’m not sure we could’ve or should’ve done anything any differently in this situation, aside from learning Vietnamese (though I was certainly embarrassed about the mistrustful way I grabbed my pack from him). It turned out that no one was trying to hurt us or even scam us. In fact, everyone in this story was helping us get where we wanted to go. 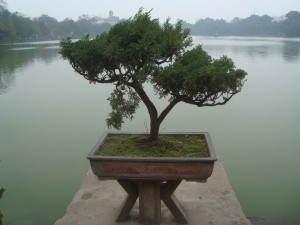 This is probably one of my least favorite parts of traveling – the art of finding the right mix of being smart and cautious in the face of seemingly endless stories of theft and scams, while also trying to maintain a little trust in humanity and not approach every person or situation with suspicion. It is a delicate balance. We’ve been extremely lucky so far and have met so many wonderful and helpful people, yet we try to always remember to keep our wits about us. The Hanoi airport taxi pickup was probably one of dozens of examples we have on our trip of how something so simple can be downright unnerving when there is no communication and we don’t understand what is happening.

I think this taxi experience was also one of many reminders we’ve had (see also our Shanghai airport layover experience) that things usually work out in the end because most people are genuinely trying to help us get where we want to go. When you’re traveling around on foreign soil and unable to speak the language at all, things are bound to feel confusing and downright scary sometimes. It is all part of the experience.

3 thoughts on “A Delicate Balance”