If our leisurely slow boat on the Mekong River into Laos was an appropriate foreshadowing for the sleepy feel of that country, then our frantic-feeling Hanoi Airport taxi pick-up was about the right introduction to Vietnam. 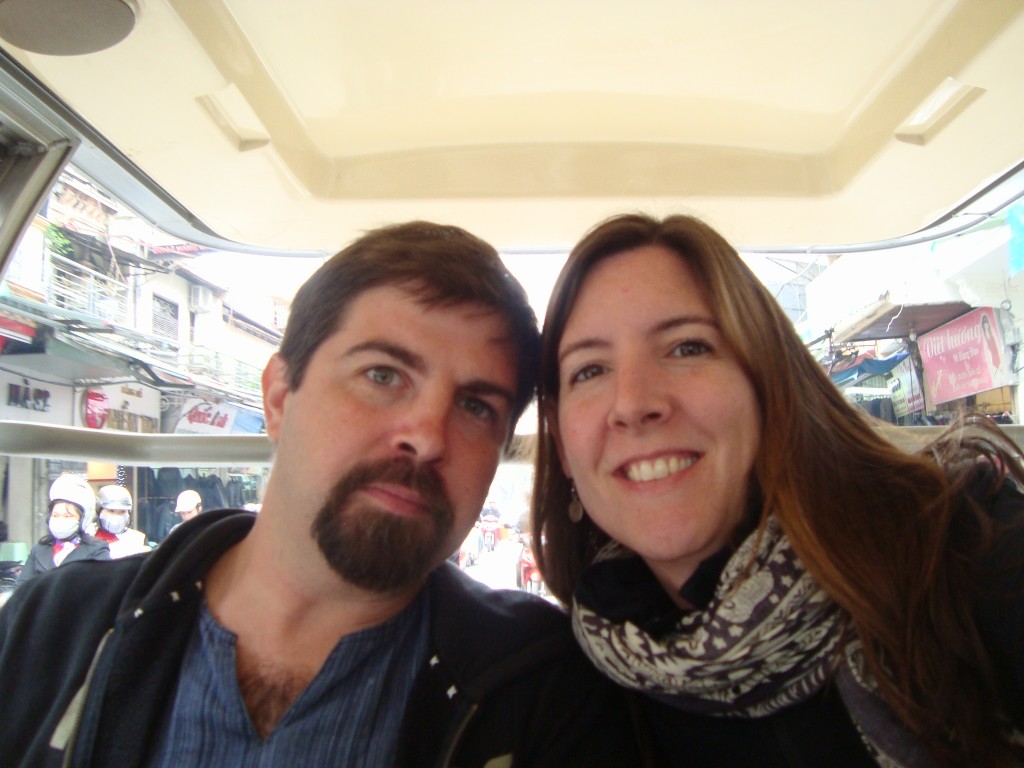 After arriving late Sunday night, we awoke on Monday morning to a voice blaring from the many loudspeakers lining the streets. We stepped out onto our balcony in the drizzling rain and wondered if something was happening that we should know. But no one seemed to be paying any attention and we later learned from a guide that these were government announcements to the citizens; a way they could pass on “helpful news.” We didn’t quite get used to these loudspeakers, but we tried to ignore them like everyone else.

All of the motorbikes get parked on the sidewalks, which makes walking on them a bit more challenging.

The eerie big brother speaker system nor the coldest weather on our trip so far could dampen our excitement to be in Vietnam, so we put on all the layers we had and set out to explore. We didn’t plan to stay in Hanoi long, so we wanted to get a feel for it while also figuring out how to get out to see Ha Long Bay and decide whether there was anywhere else we should go in the north before heading south.

It is hard to describe it any other way: Hanoi is the most intense city I’ve ever experienced. All the motorbikes and bicycles and pedestrians whizzing by are enough to make your head spin, then add incessant honking of horns and you can barely walk or think straight. As John described it, imagine a mix of NYC’s Chinatown with New Orleans’ French Quarter, then add thousands of people on bikes and motor scooters. We absolutely loved it.

The frenetic pace actually can be pretty fun. As long as you have your head in the game when you walk around and cross the streets, it all goes surprisingly smoothly. There aren’t any stoplights, or well, traffic rules, but you are supposed to just slowly step out into the street and cross at a steady pace, and the traffic will just go around you. One of the more amazing and surreal experiences I’ve had in my life was that of stepping out into oncoming traffic and watching the motorbikes and bicycles just flow around me like a school of fish swimming around a rock. That is just how it is done, and it works out because there are very few cars. It goes against everything we’ve been taught about crossing the street, but you just have to walk in and keep a steady pace. The first few times of stepping out into oncoming traffic can be pretty daunting. Well, who am I kidding, it was always a little nerve-wracking, but you get used to it going well so it gets easier. 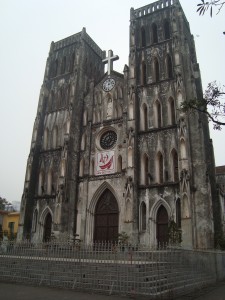 While it is very high energy and loud, the city is also very beautiful and has a mystical feel to it. I’m sure the misty fog added to that, but there are lovely old vine-covered trees everywhere as well as ancient stone statues and pagodas mixed in with all the modern buildings. Also, I kept having weird deja vu moments of Paris, because of all the French influence.

It turned out that having some planning to do gave us a good excuse to stop every few hours and have food or drinks and just watch the city go by. We also had fun trying some new cuisine and really enjoyed the noodle dishes (Pho), and also had some amazing spring rolls, which were different in Vietnam than those we’d had so far. Aside from the piece of glass that ended up in John’s omelet one morning (and which he luckily found in his mouth before it went too far or did any damage), we liked the food a lot more than in Laos. One thing we noticed right away was how much richer it was than the Lao or Thai food, and we guessed it was from more butter. But we’re not sure. Not really much spice, but that was ok with me.

We didn’t venture too far outside of the Old Quarter in Hanoi, and we stayed about three days total after leaving and coming back twice on trips out to Ha Long Bay and up to Sa Pa in the north. We had a great time, and given how intense Hanoi is, seeing it in a few short doses seemed just right. 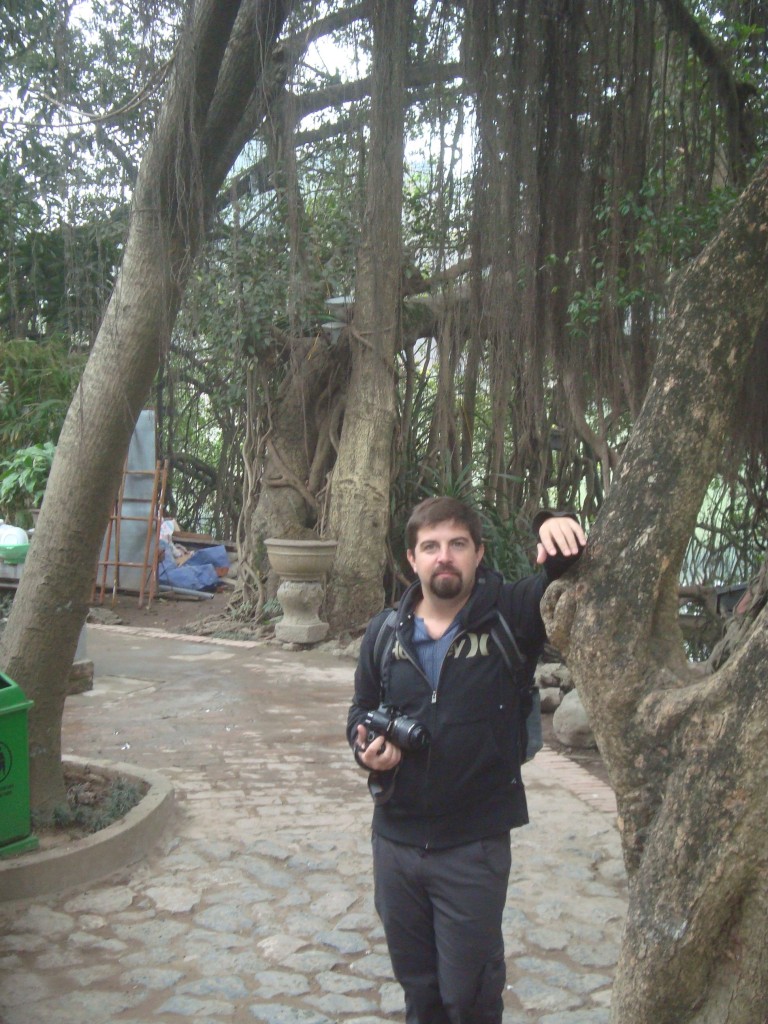 Pagoda (Turtle Tower) in the middle of Hoan Kiem lake. 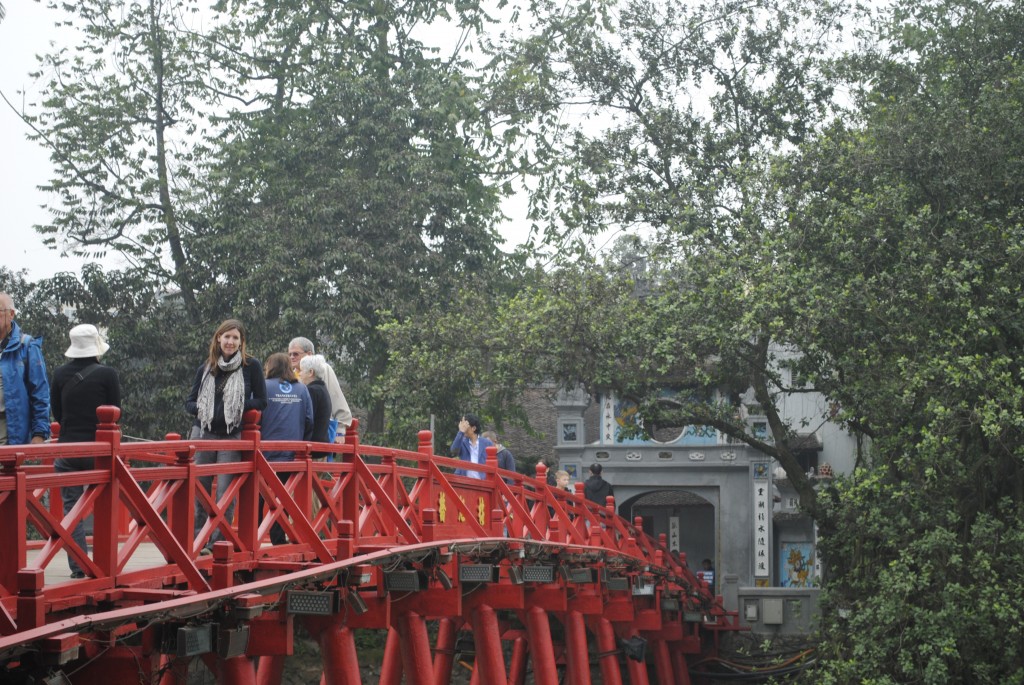 Huc Bridge to Jade Island in the middle of Hoan Kiem lake. 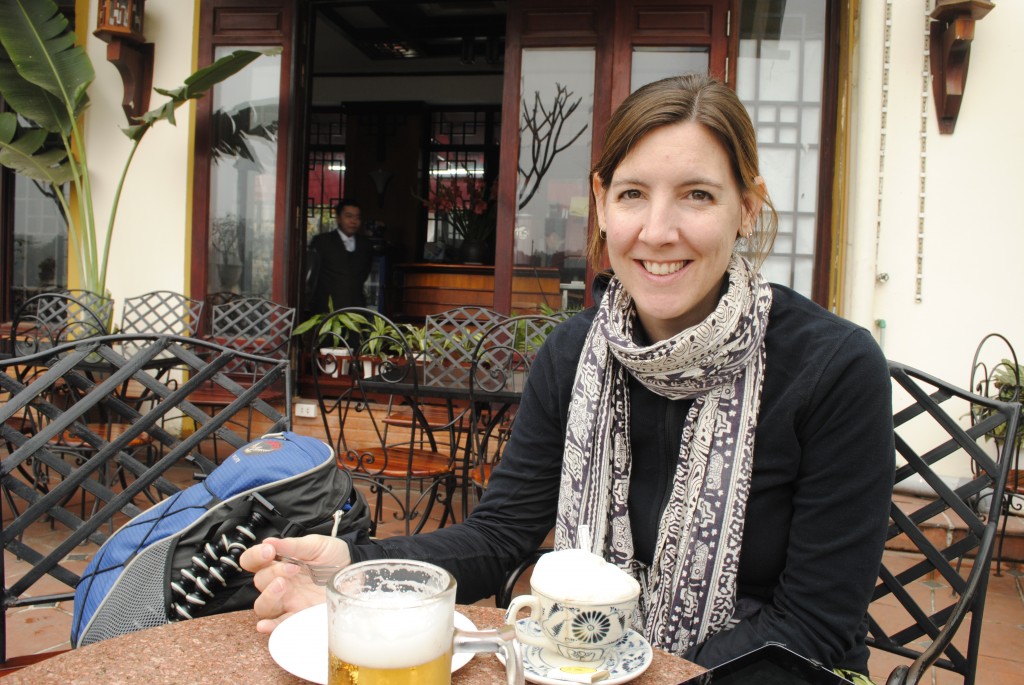 Having a beer and a cappuccino lakeside.

Another stop at an outdoor cafe.

And of course, trying the local brew. 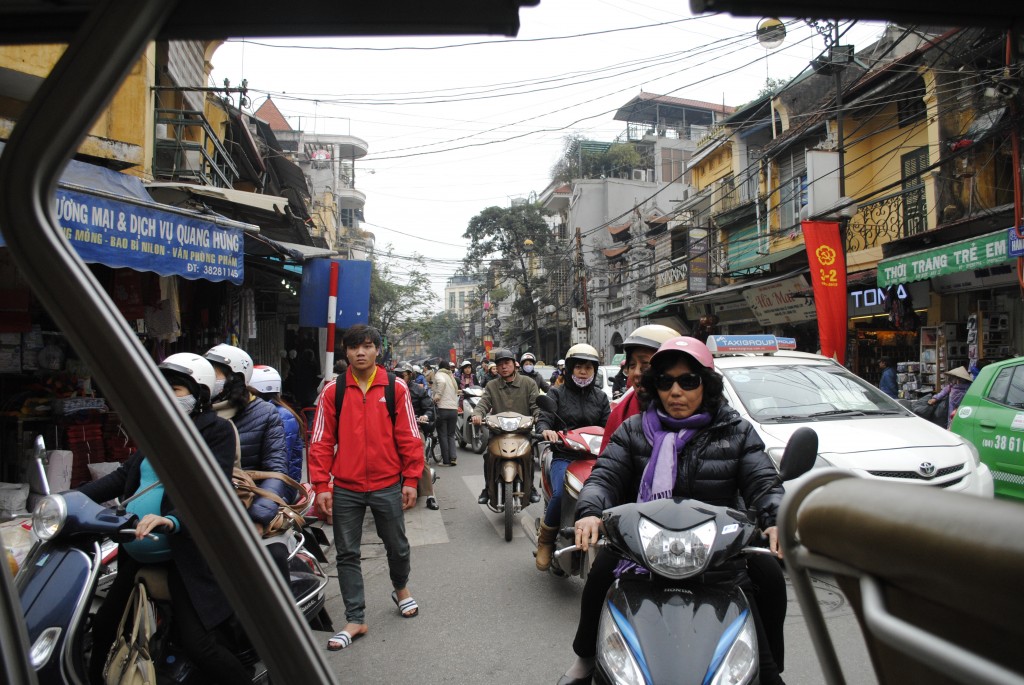 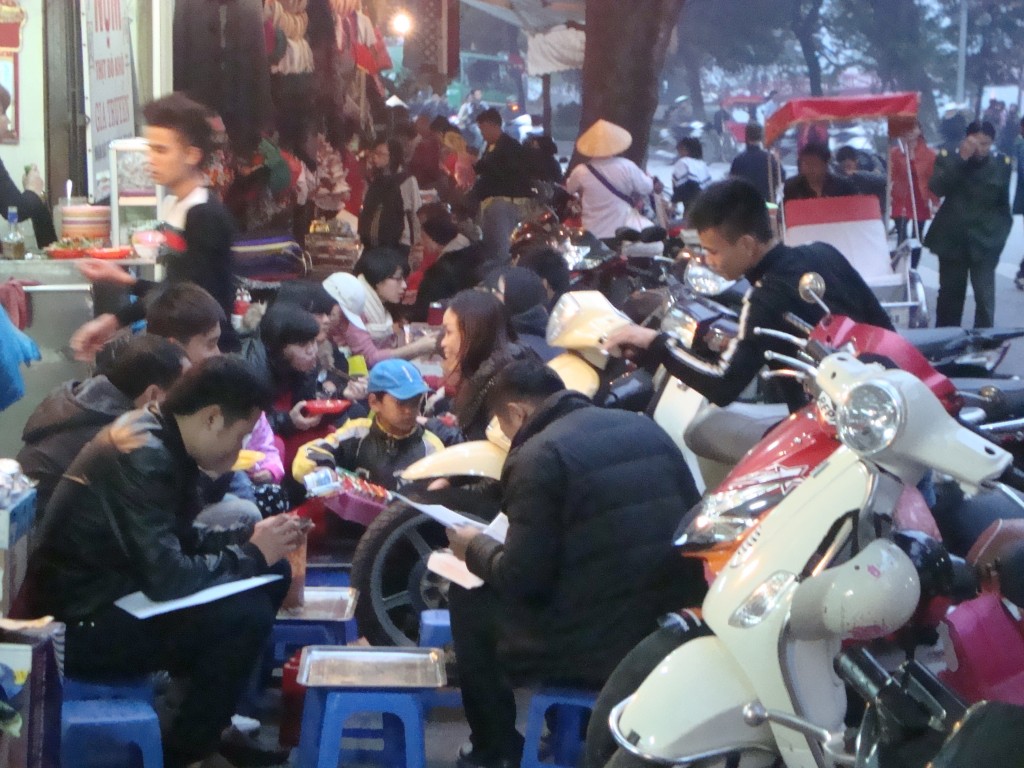 Typical nighttime scene of folks eating Pho (noodle soup) at one of the many sidewalk eateries. 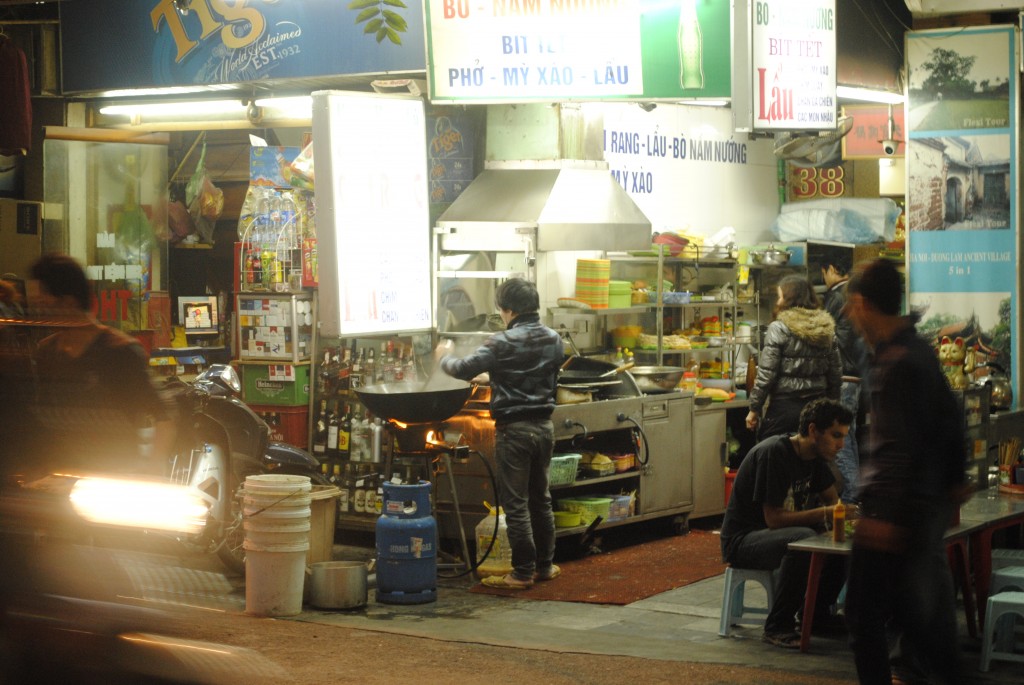 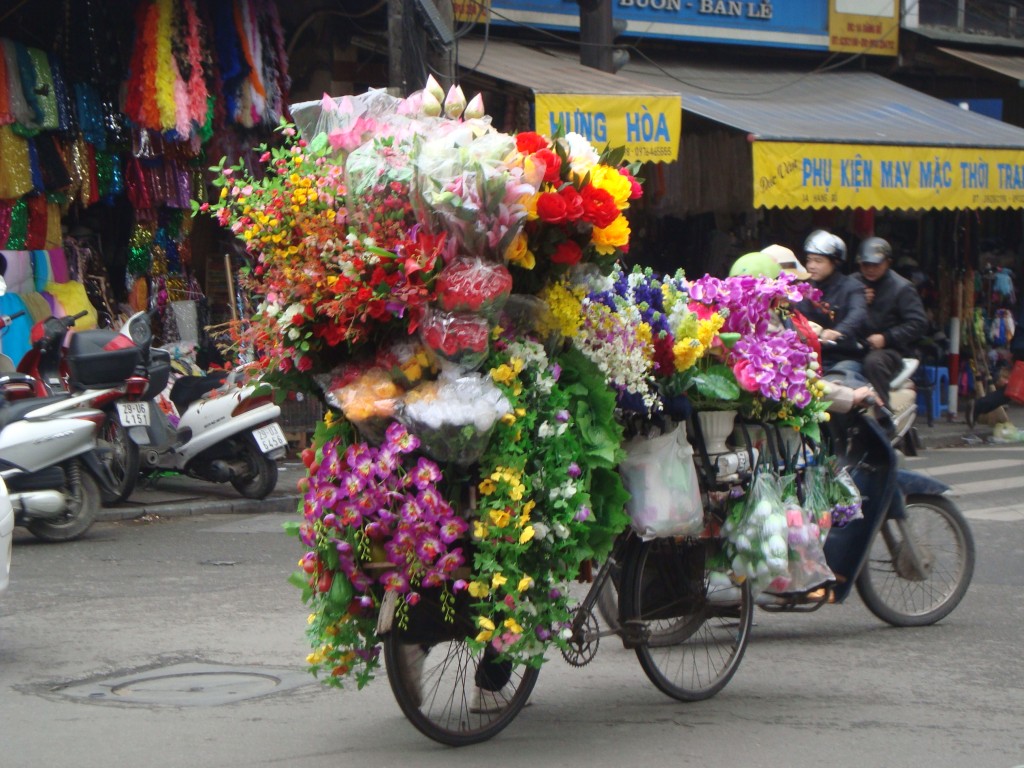 We were really impressed with the sheer quantity of things the Vietnamese loaded onto bicycles and motorbikes. 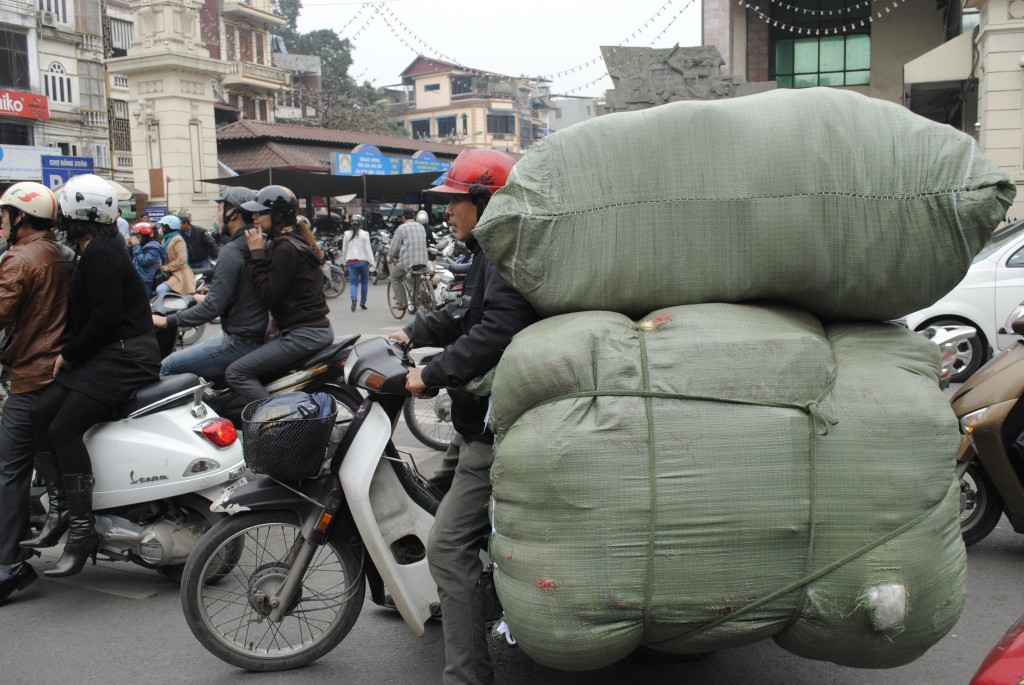 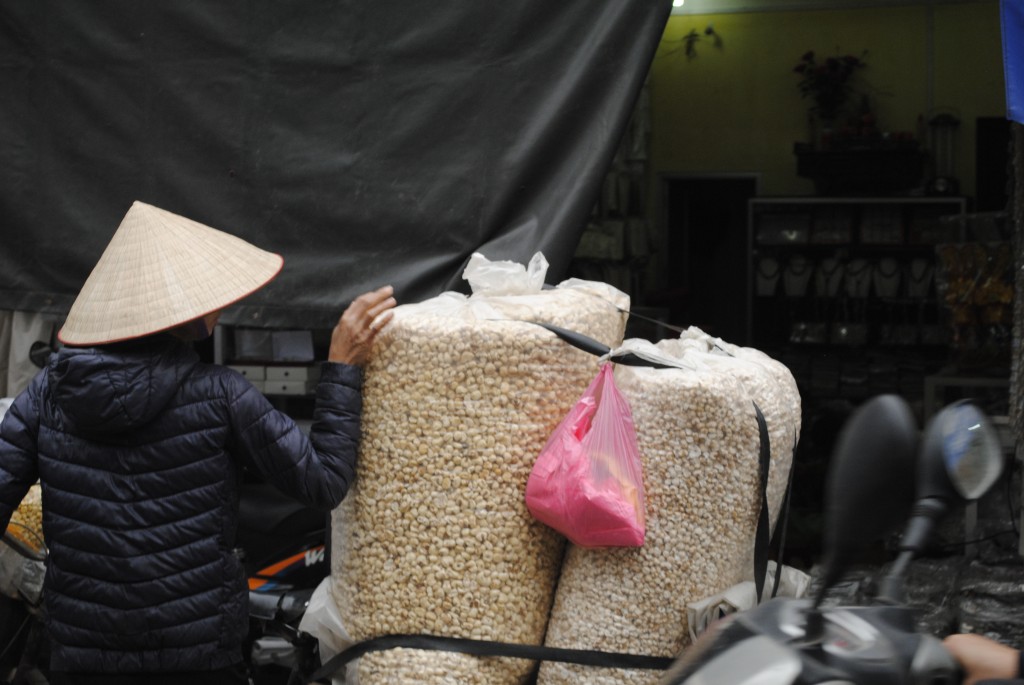 One thought on “Experiencing Hanoi”