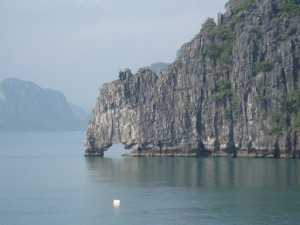 One of the things we knew we had to do in Northern Vietnam was see Ha Long Bay. We bought a tour from the same company we used for Sa Pa, which included transportion from Hanoi (4 hours in a minibus) and a cruise lasting about 24 hours on a restored Chinese Junk boat through Ha Long Bay. Our cruise actually continued onto the less touristy and less crowded Ban Tu Bay, where we docked for the night before heading back. It is really hard to describe how amazing it was to glide through the emerald green waters of these bays through the 2,000 limestone karsts and islands rising out of them. It was a pretty surreal experience for us and well worth the cost.

The karsts in the bay have been formed by the elements for over 500 million years, but the name “ha long” means “descending dragon” and legend has it that the bays were formed when Vietnam was a nascent country and the gods sent dragons to protect it. The dragons are said to have spit out jewels and jade along the coast, which made the karsts and islets that dot the harbor and stopped many ships from attacking. Over 1,500 people live throughout the bay in fishing villages, and we got to visit one out in Bai Tu Long Bay on our second day. It has to be a hard life out there on the water, especially during storms. We learned that teachers come in from the mainland to teach in the small school, and if there are medical emergencies, speedboats can get to them from the mainland in about a 1/2 hour to take patients to a hospital. 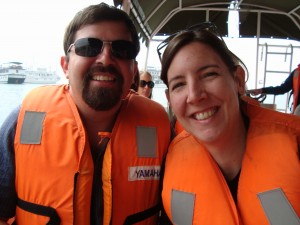 Small boat taking us to the bigger boat.

Aside from the excitement of getting to see this amazing place, we had a great time on our cruise because of the people we met. Kate and Chris from South Africa were on a similar trip route so we ended up spending an evening in Hanoi with them because we were all taking the night train down the coast the next day. We had so much fun with them that we also hung out a couple times in Hoi An. (If you’re reading – hope you had a great rest of your trip!) We also met some of our first Americans on the trip and really hit it off with Holly and Elena, two awesome moms who were traveling together for a short vacation. The six of us had dinner together before our train in Hanoi, and Holly and Elena generously bought dinner for the backpackers on a budget. It was a fun night and it turns out Holly lives near John’s hometown so we hope our paths will cross again. There were lots of other fun folks on that trip, and as we’ve learned along the way – the people you meet can really make an experience so much more fun than when it is just a sightseeing trip. 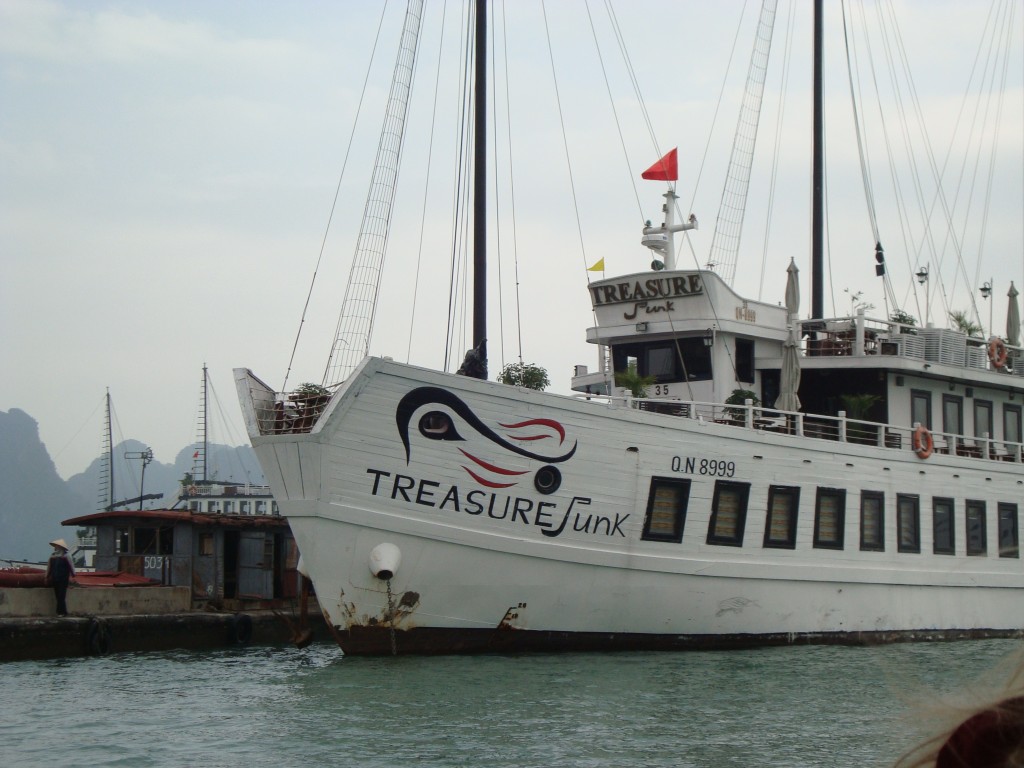 The Treasure Junk, our home for about 24 hours. 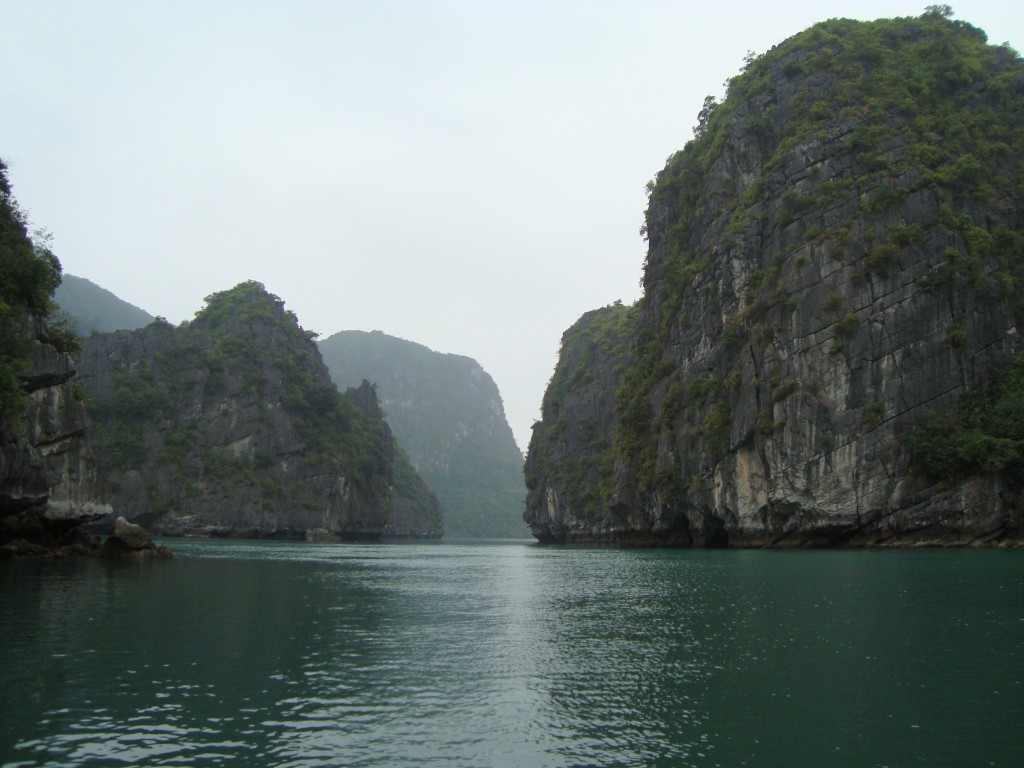 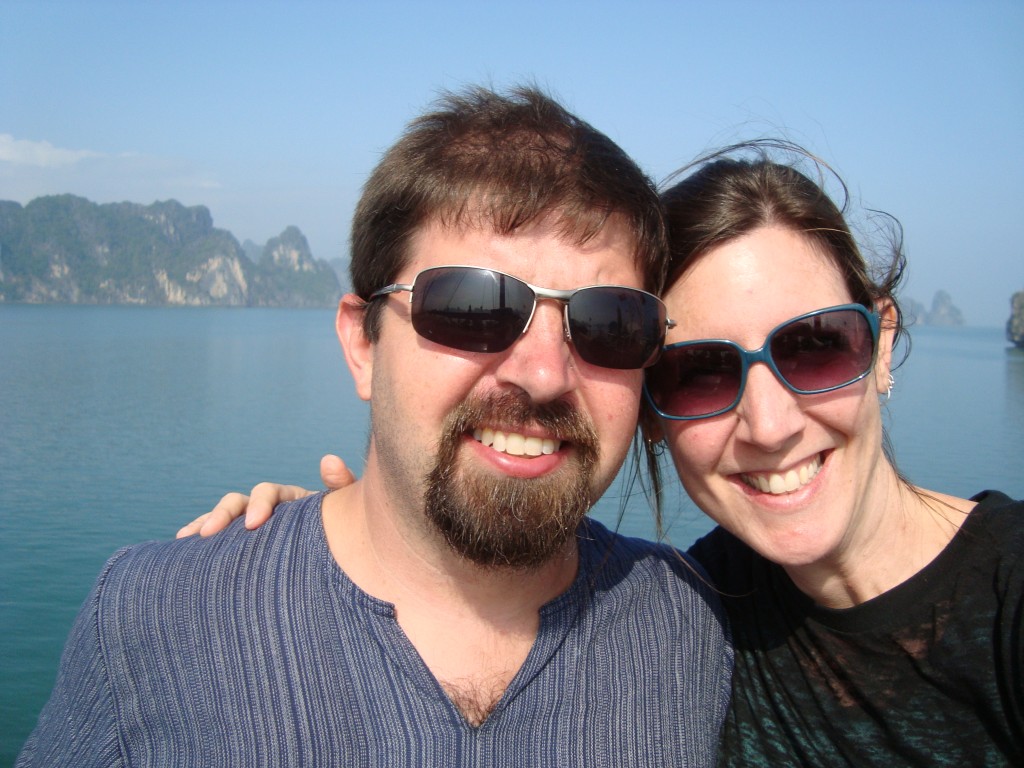 On the deck of the Treasure Junk 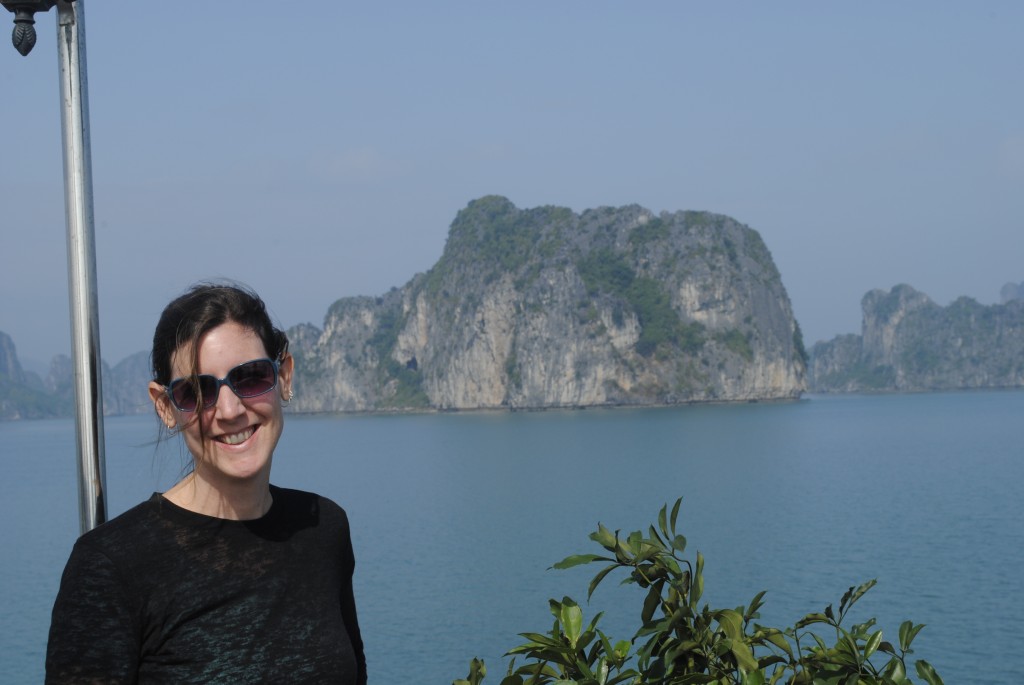 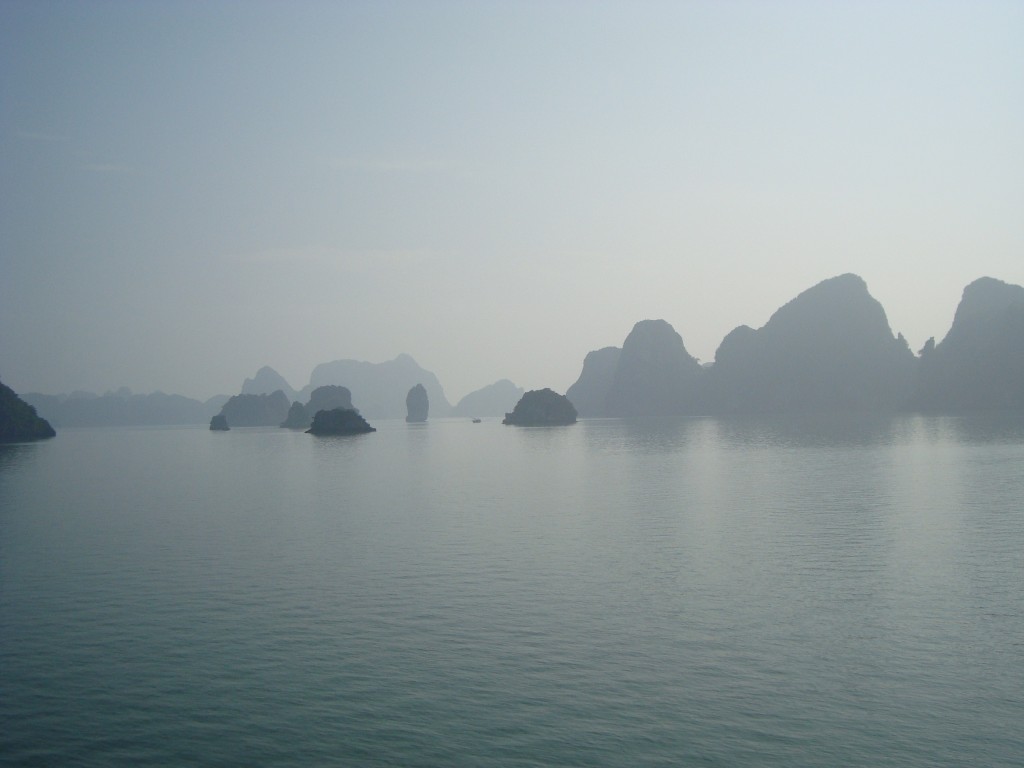 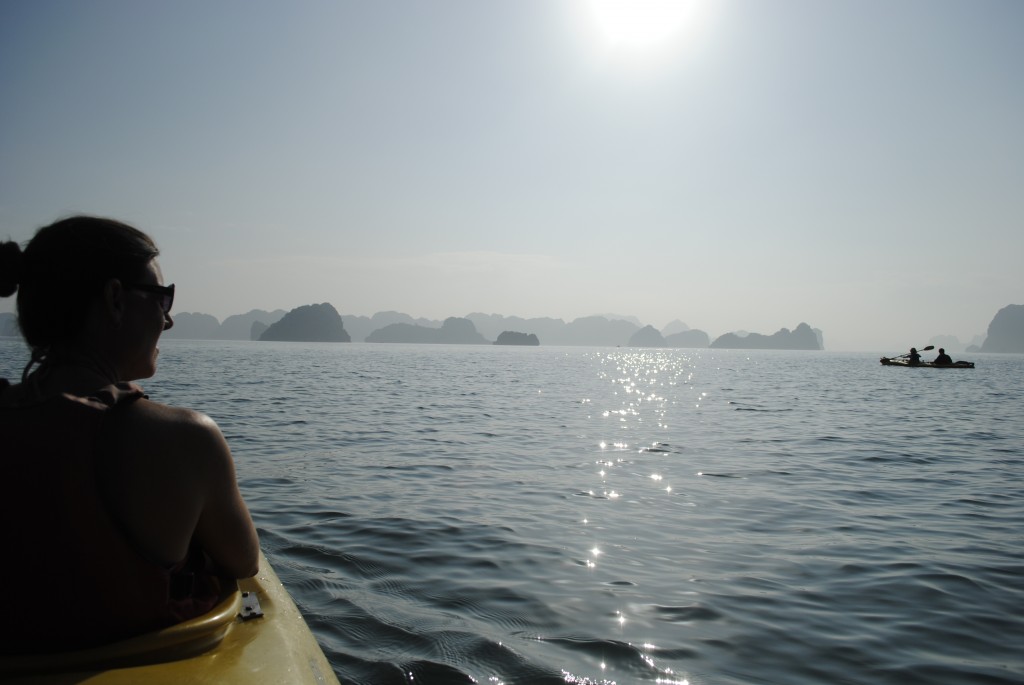 kayaking among the karsts 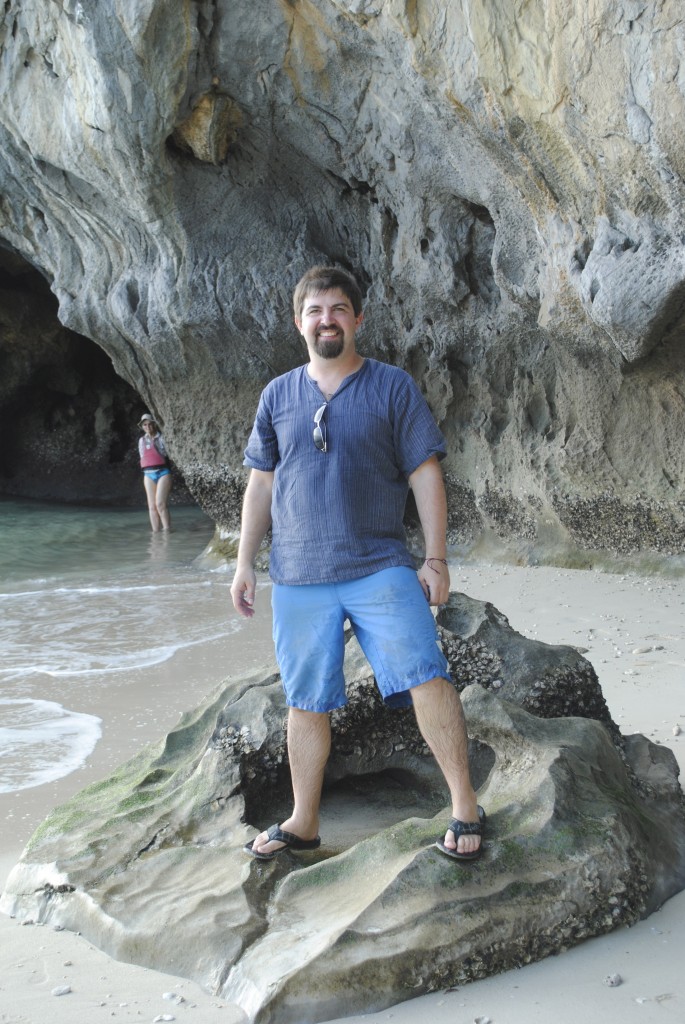 We stopped at an islet with a beach. John was one of the few people who braved the cold water and took a swim. 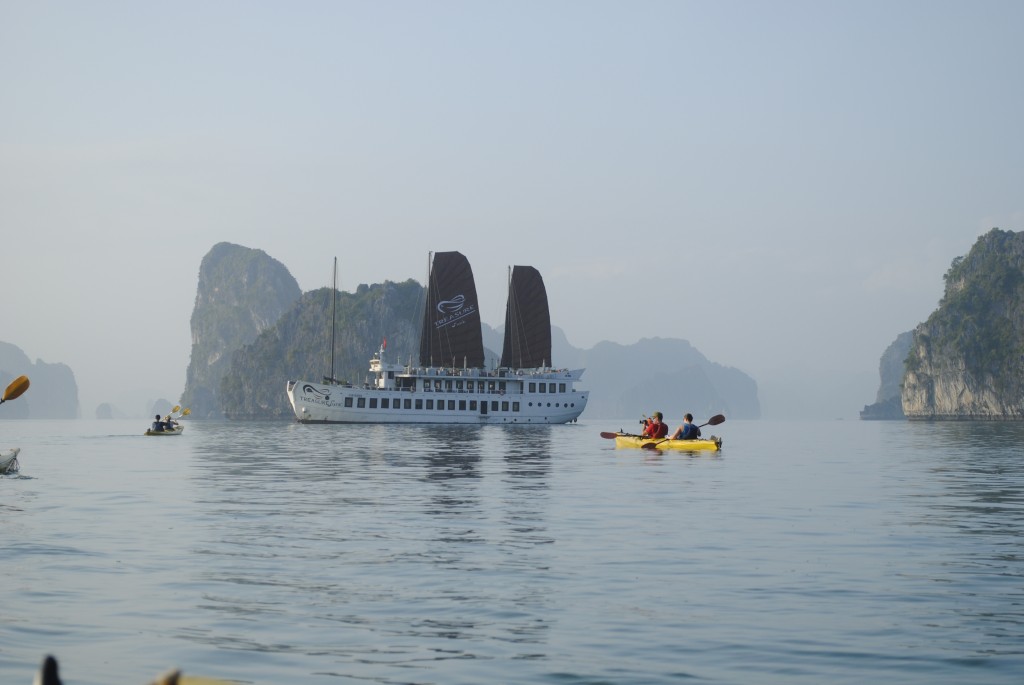 Kayaking back to our boat 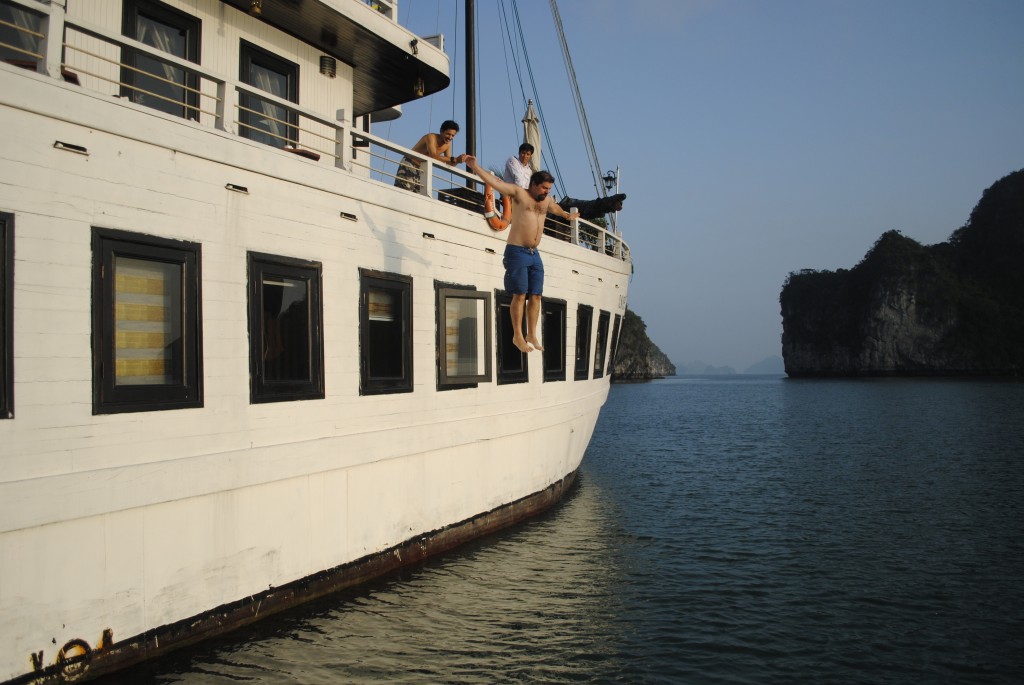 He also jumped in again once we were back on board the boat. 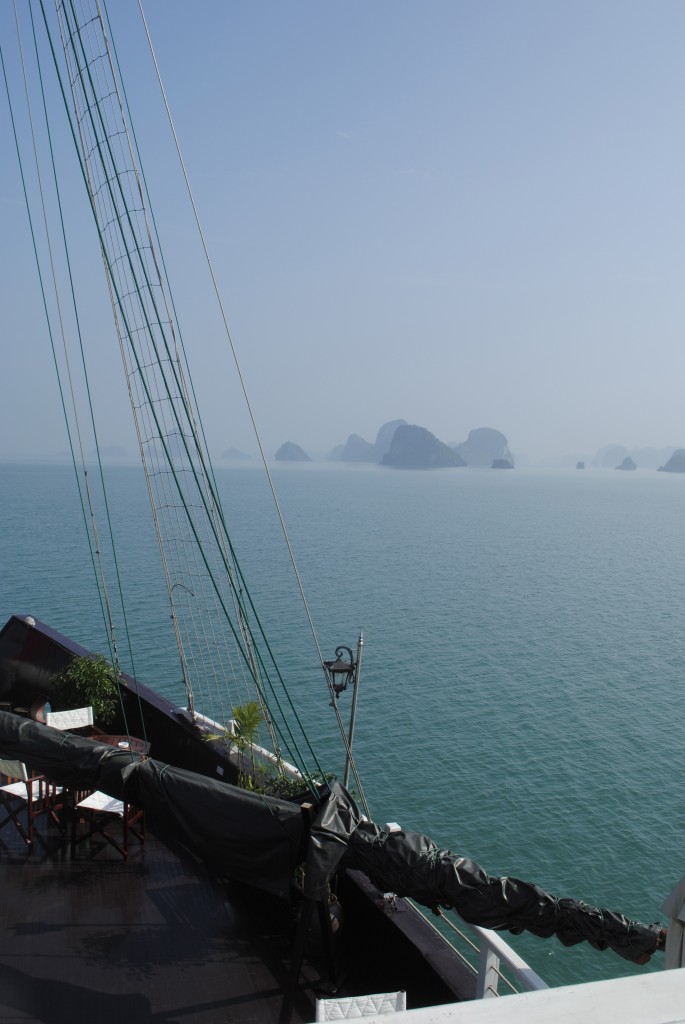 From the top of the boat

Boats we took to visit the fishing village in the bay. 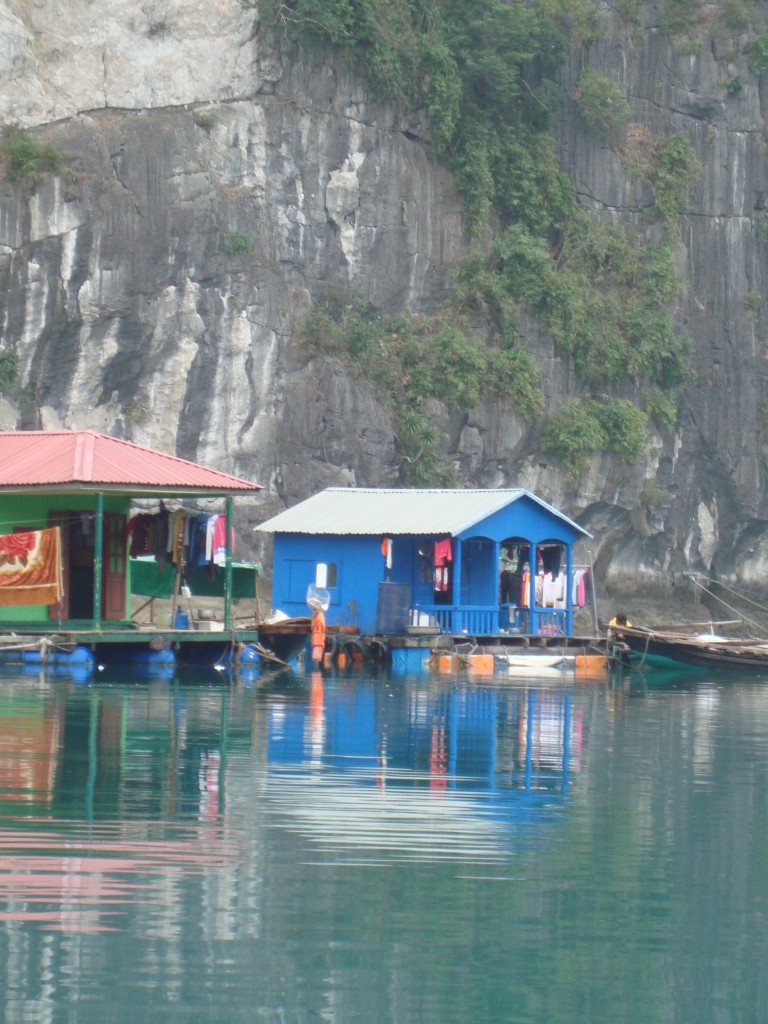 House in the fishing village 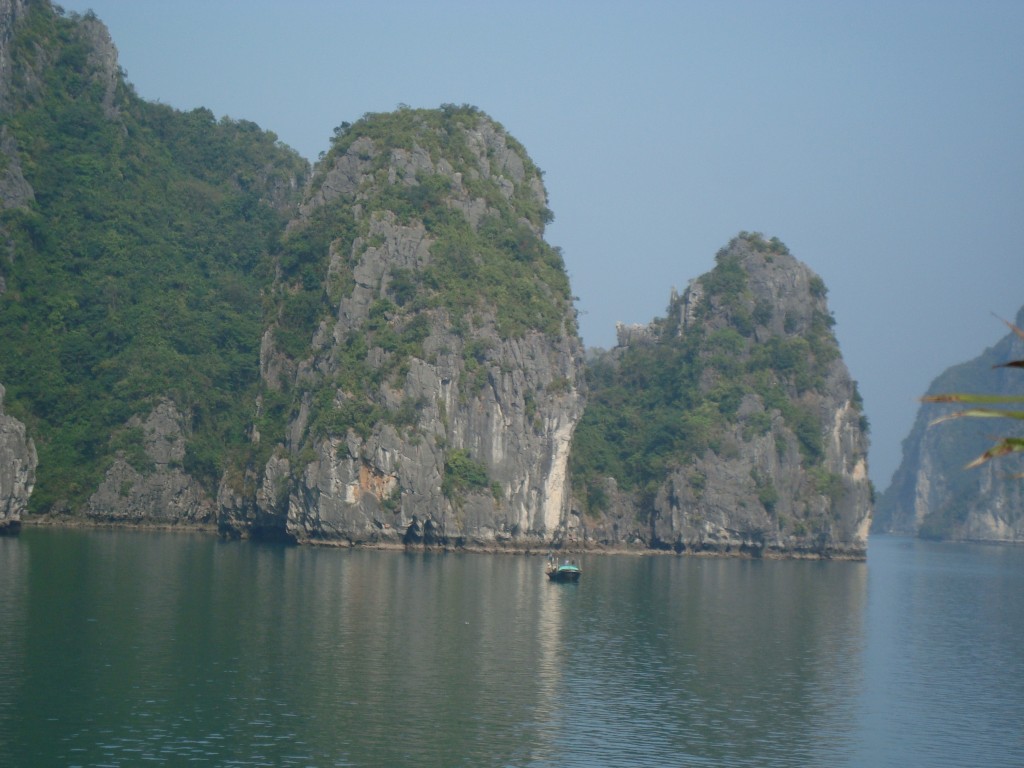 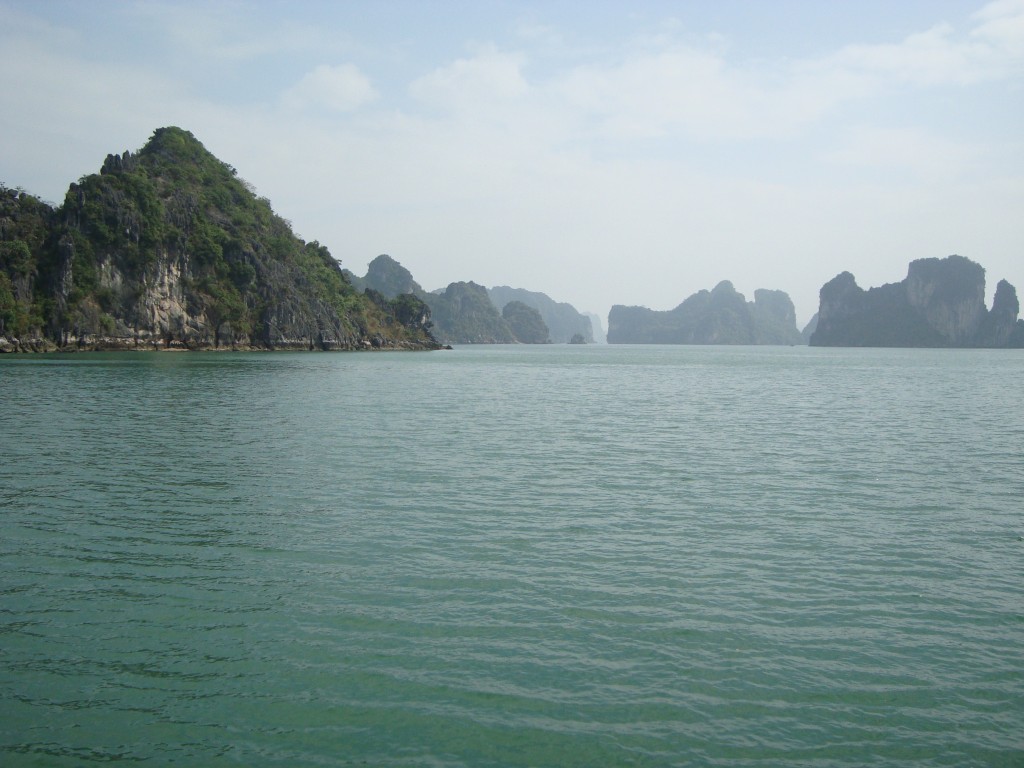