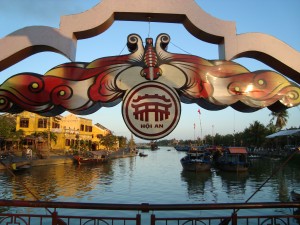 Maybe it was because we were at the halfway point of our trip, or maybe it was because we’d finally gotten adjusted to being on the road, or simply because Hoi An was just that great. For whatever the many reasons, I really loved Hoi An and while we were there I felt like things finally clicked. Lots of things came together that allowed us to finally feel relaxed and more in the moment. 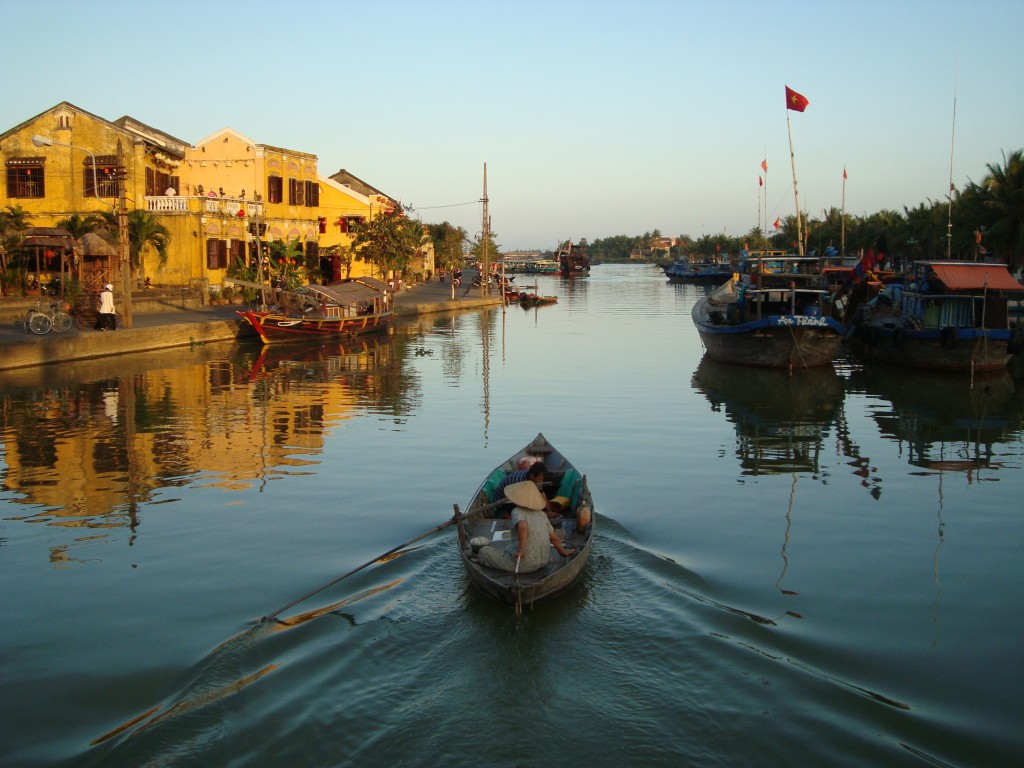 Hoi An has a lot going for it. This town of a little over 120,000 people is in the center of Vietnam, and sits on the eastern coast between a river and the ocean. While we were there, the weather was perfect, our hotel was both awesome and cheap (and at 8 days, it marked our longest stay in one hotel), we were near a really quaint riverfront, and we were also a few minute bike ride from the beach. Not to mention the food was really good and there was lots of good shopping. 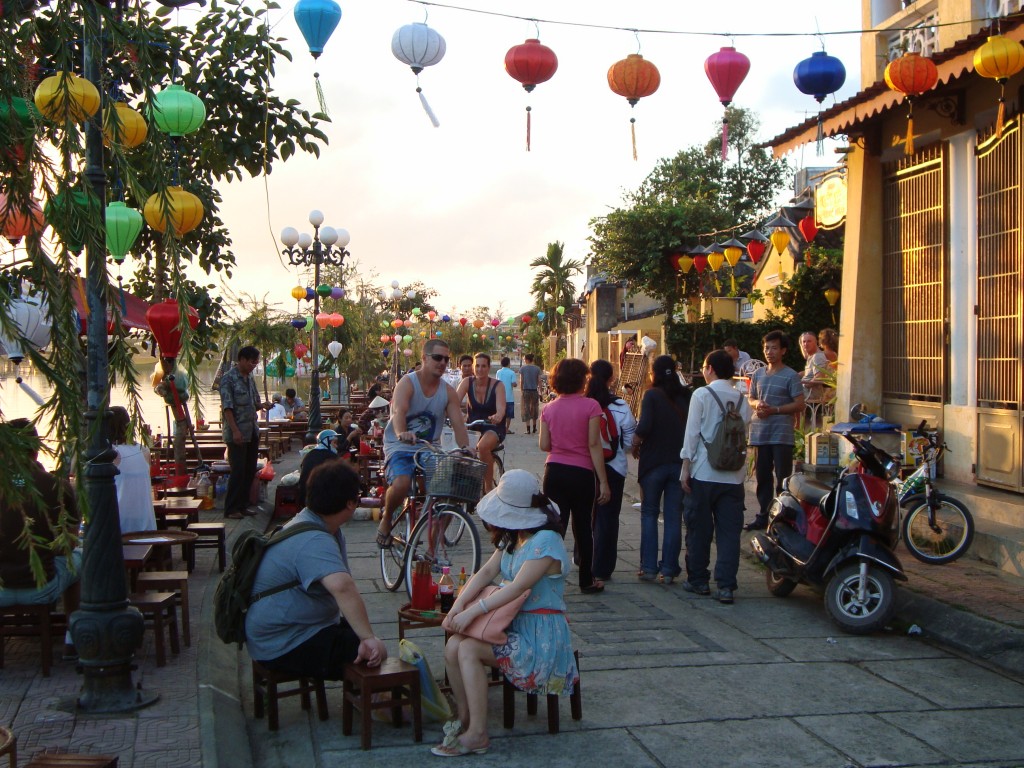 Once a major SE Asian trading port town, Hoi An has a very well-preserved historic town center because the river’s connection to the sea silted up a couple hundred years ago, essentially freezing it in time. Today, strict preservation rules keep it from being changed too much and it’s a really beautiful town. I loved that it was just bustling enough to feel exciting and not boring, yet small enough to get around on foot or bicycles. Maybe it was the pleasant sunny weather, or my frame of mind while we were there, or the fact that most locals there are considerably more wealthy than the average Vietnamese person, but everyone seemed really friendly and happy. I loved biking around the town, seeing street after street filled with atmostpheric hanging lanterns, and row upon row of beautiful flowers for the new year. It would’ve been really difficult not to love this town.

Here I’m wearing the skirt I had made, with a hand-painted design. I had everything else mailed home.

Hoi An is also world famous for its tailors, who can sew up anything you desire in about 24 hours. There are over six hundred tailor’s shops around the town. I had a few things made that ended up fitting me like a glove and turned out well, but at the end of the day it was a mixed experience. Shipping the clothes turned out to be more expensive than I was led to believe it would be (the cost kept going up the closer and closer I got to handing over my credit card). My tailor turned out to be a bit shady, and I had to threaten to leave a bad review for her on TripAdvisor in order to end the negotiating and get her to agree to mail my stuff home. It was more disappointing than anything, given that I thought we’d developed a friendly rapport over the 3 or 4 days that I came in and out for fittings, but I think she saw an opening and tried to take advantage of my friendliness. At the end of the day I got some cute clothes that were handmade to fit me perfectly, but I did pay for the experience.

We also happened to be in Hoi An for the first few days of Tết, or the Vietnamese New Year. This made it an especially festive time to be in Vietnam, and Hoi An in particular. They had a lantern festival on the river, a special large bonsai tree display, and the whole town was just filled to the brim with flowers the whole time we were there. 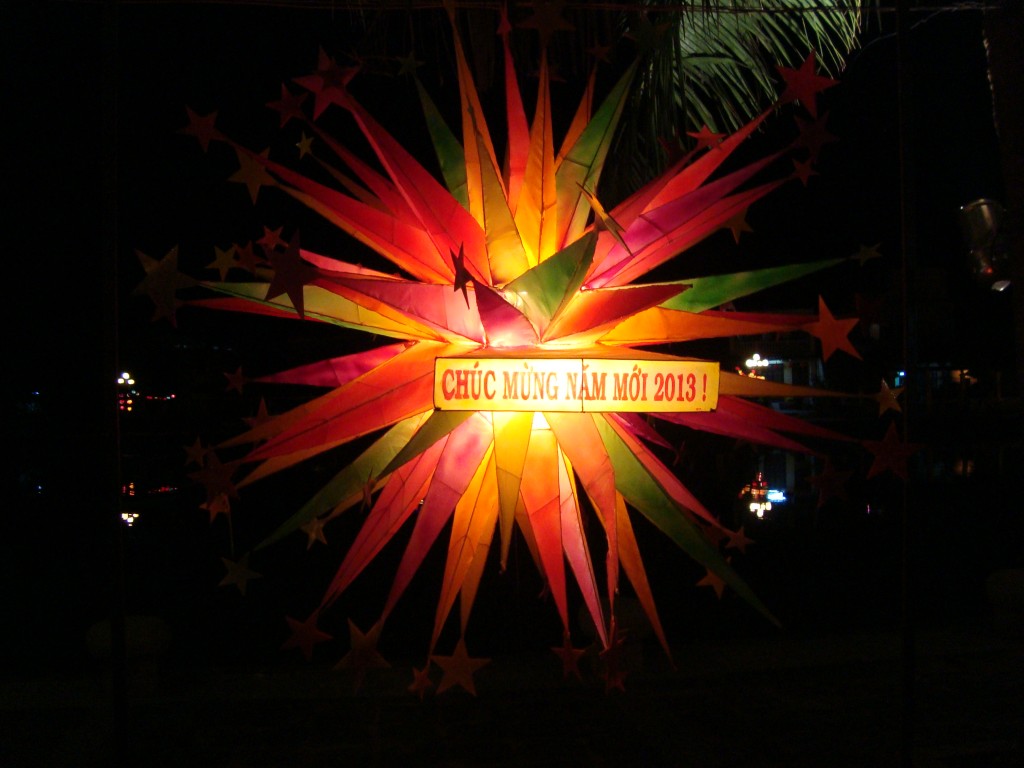 We stayed in Hoi An for a little over a week. We relaxed at the pool, swam at the beach, took a few lovely bicycle rides through beautiful rice paddies, planned out our next few weeks, and took a couple of cool day trips to see some ancient Hindu ruins and Buddhist temples, more on those in another post. 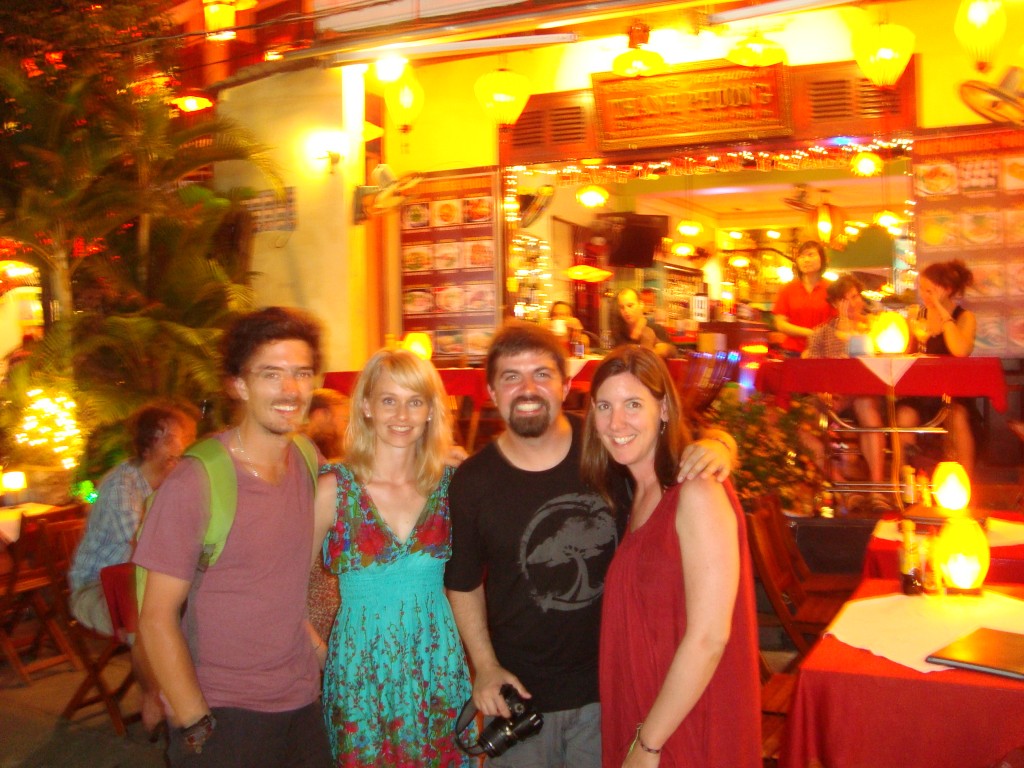 New friends! Hanging out with Chris and Kate from S. Africa, who we met on our Ha Long Bay boat cruise

John went into these rice paddies to take photos of the women in the fields, and then this farmer talked him into donning the traditional hat. He was a character; he kept touching John's goatee and chest hair, and then even slapped his butt – all while laughing hysterically. Of course he then wanted money, but he settled for taking our half empty bottle of water. I hope he gave it to one of those women doing the work. 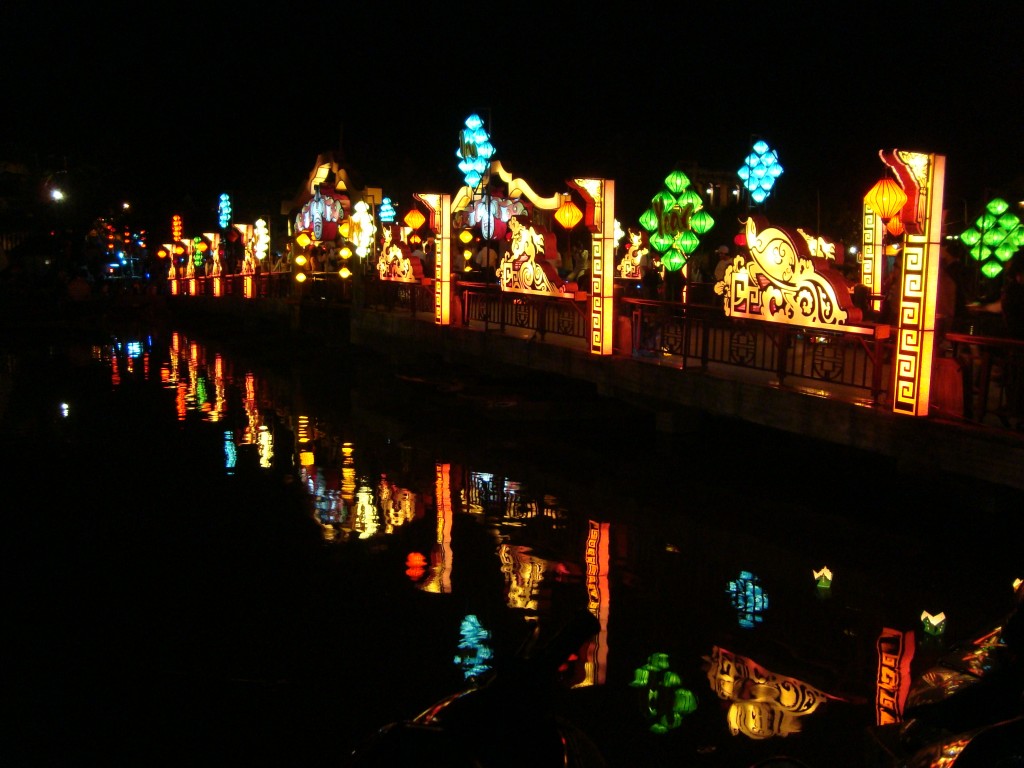 Bridge over the river at night 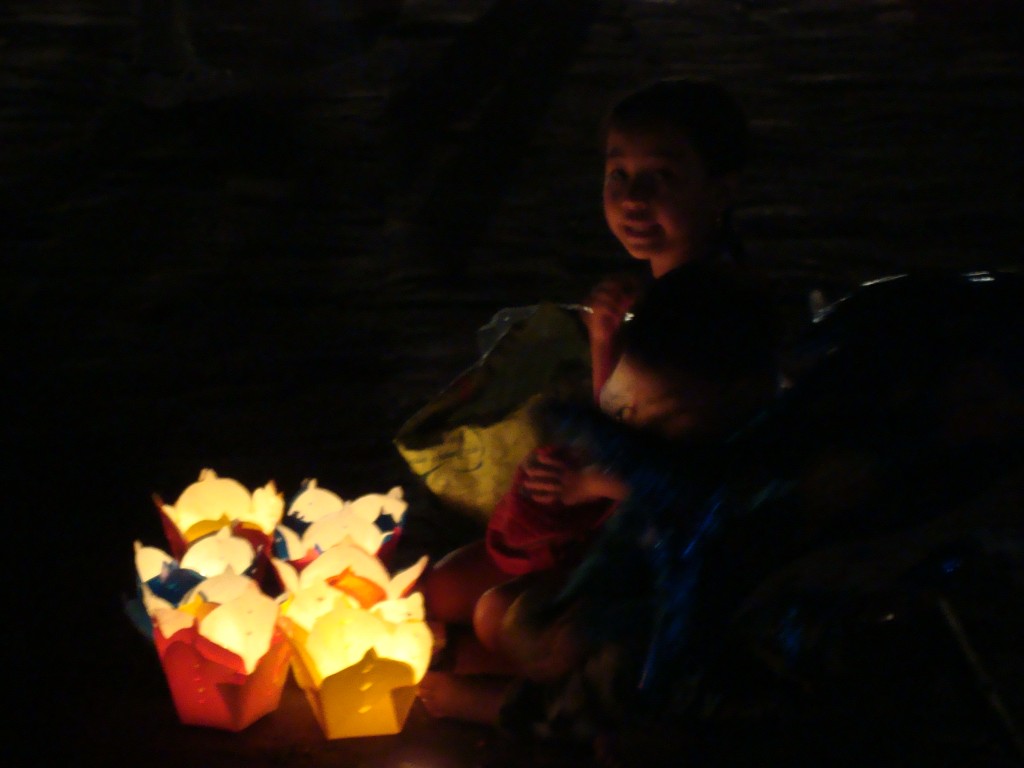 Every night women and kids would sell these floating lanterns for sending out on the water and making New Years’ wishes. 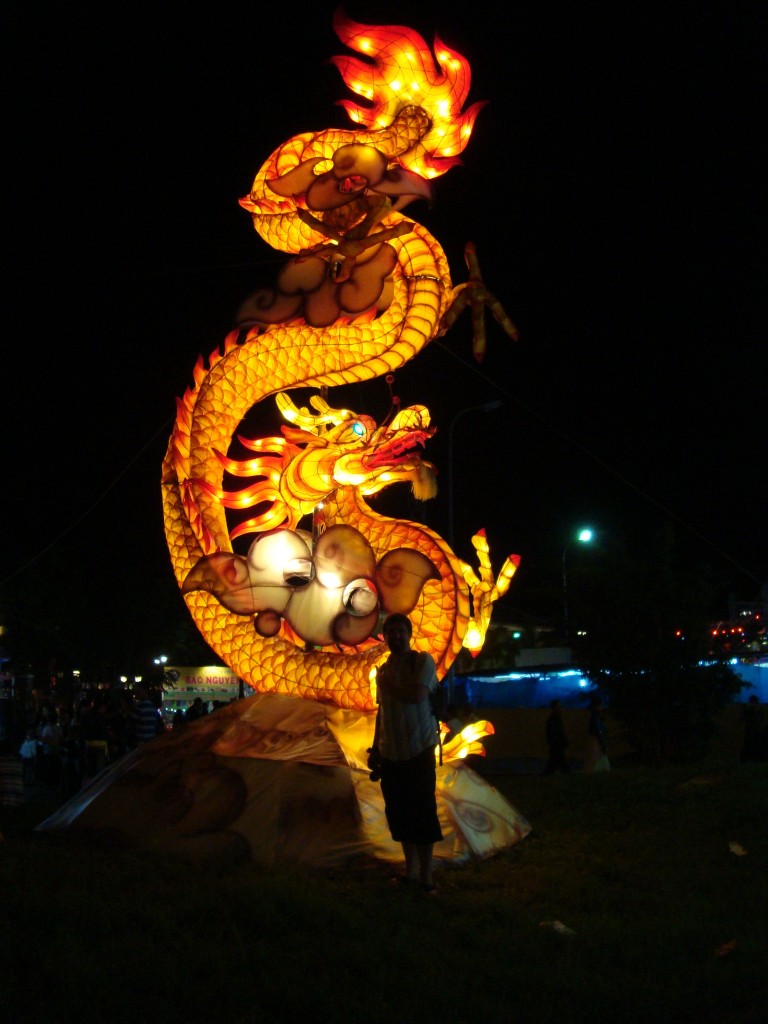 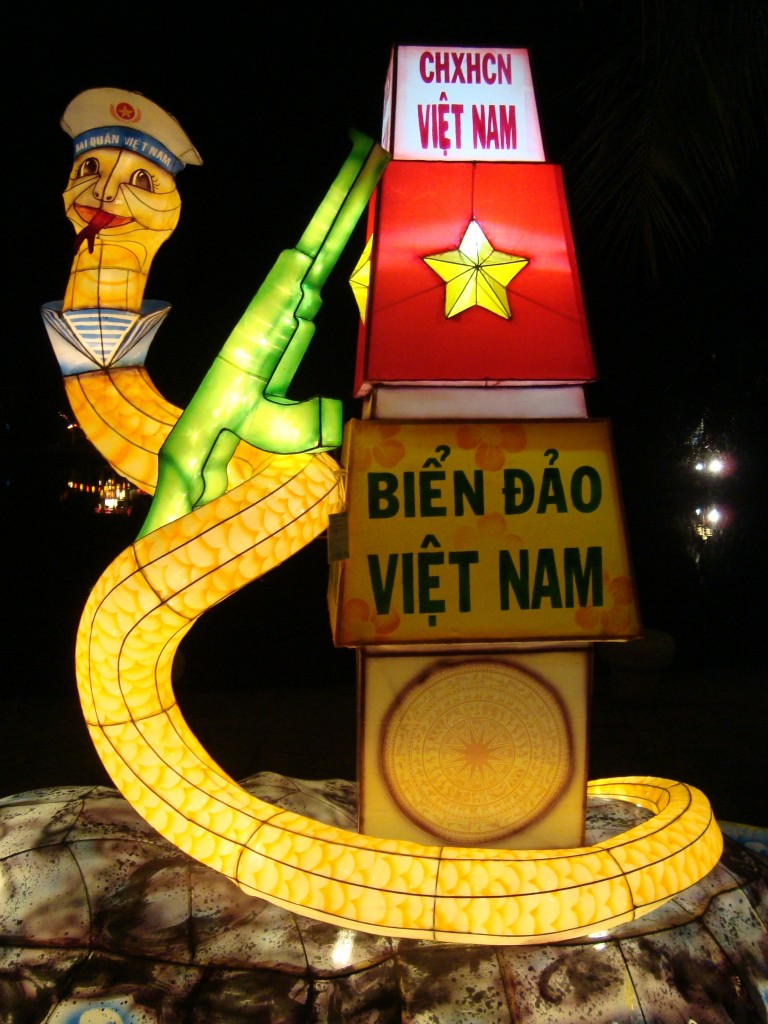 Another of the many interesting lanterns in the lantern festival 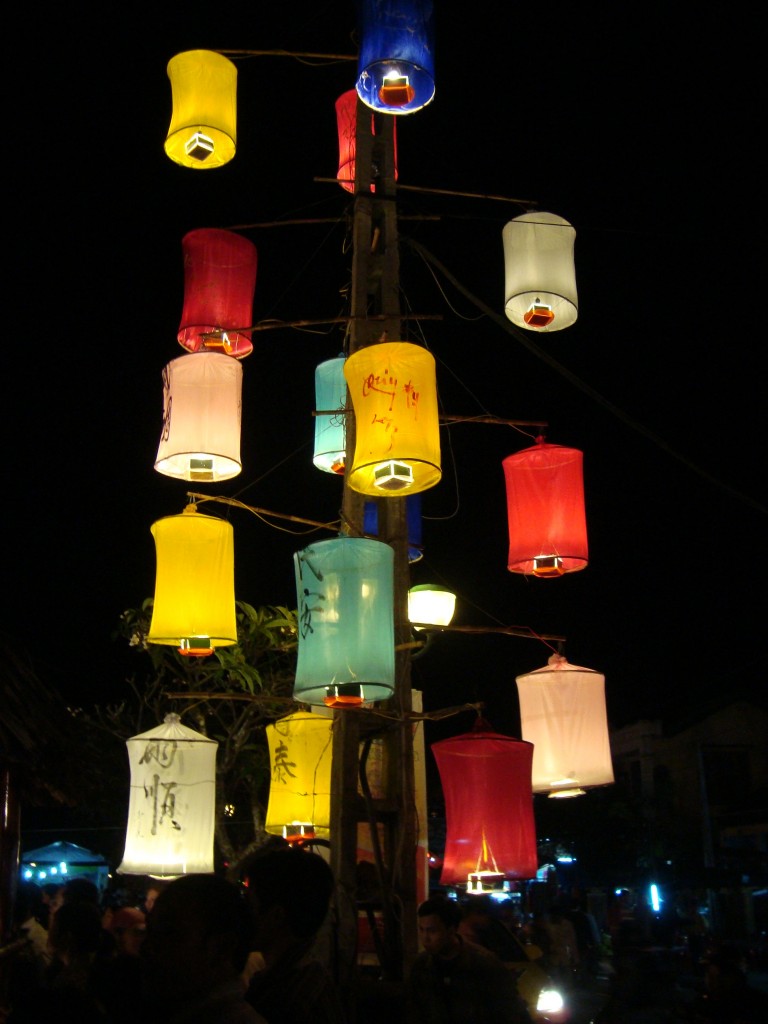 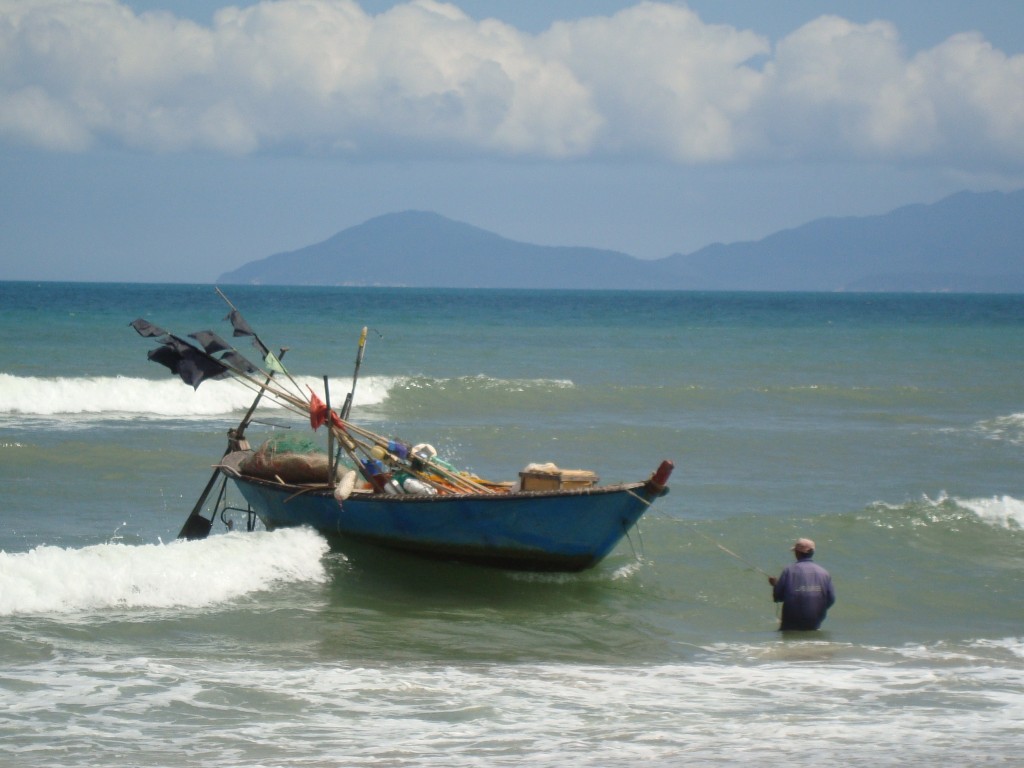 At the beach. It was a really beautiful and oddly unpopulated spot. There were lots of fishermen and this one in particular was struggling to get his boat in – we couldn’t believe he was doing it on his own. 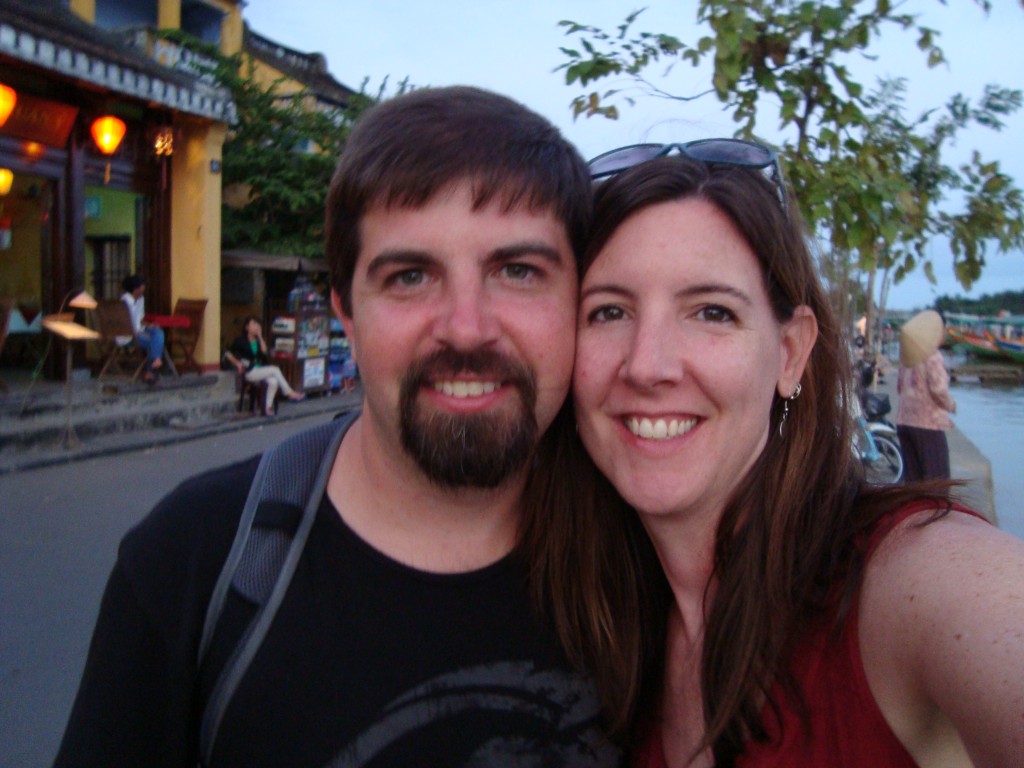 One thought on “Catching Our Breath in Hoi An”