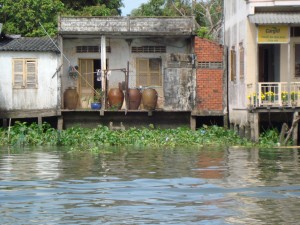 Taking a boat through the Mekong Delta

With a few days left before our Vietnam visas ran out, we wanted to figure out how to see some of the Mekong Delta while also getting ourselves across the Cambodian border and to Phnom Penh, our next stop. Planning all of this from Ho Chi Minh City during the end of Tet proved to make traveling a little more difficult than it normally would have been. After weighing our limited options we settled on a 2 day/1 night tour from HCMC through the Mekong Delta region that ended in Phnom Penh. 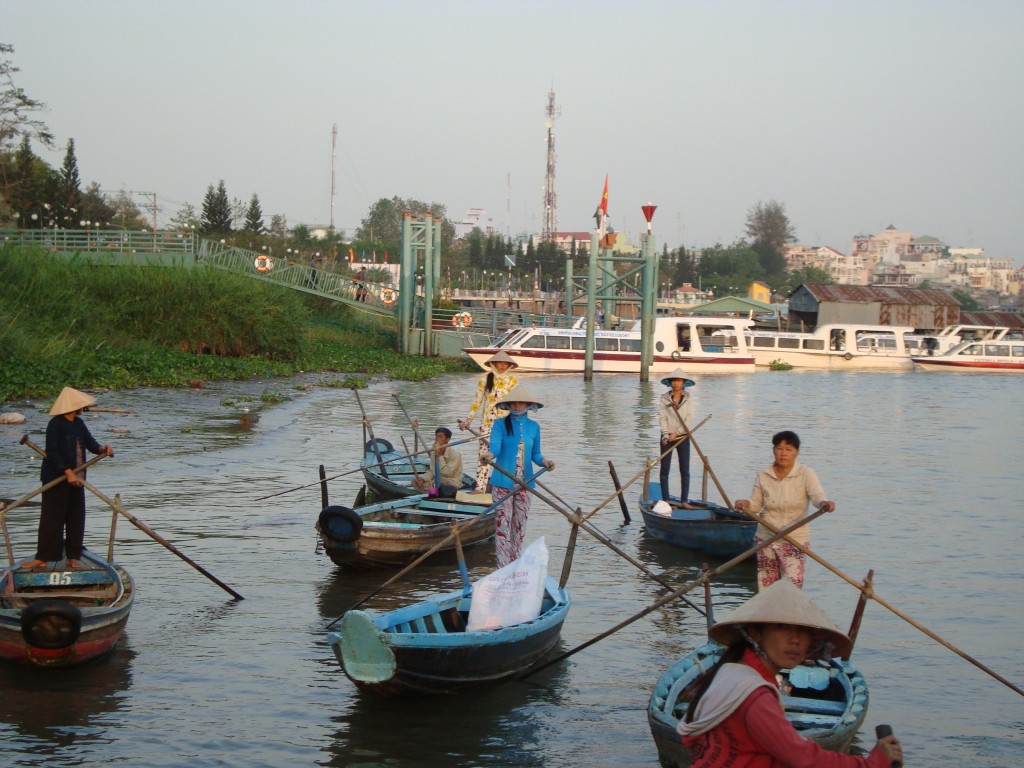 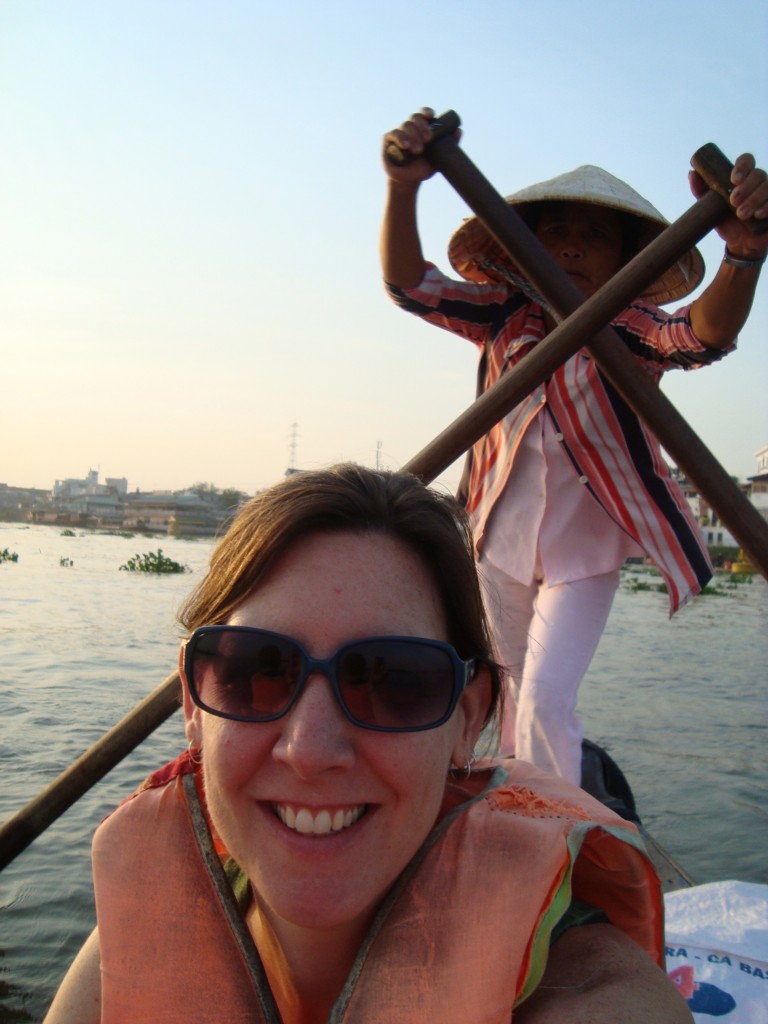 John samples tea with natural honey on a bee farm.

This tour got mixed reviews on TripAdvisor and was pretty cheap for what it offered, but we figured as long as it got us from point A to point B it would be ok. The first day we felt a little beat up after being herded like cattle from one tourist stop to another. We were taken on tours of a coconut candy making operation, a rice crispy making operation, and a bee/honey farm, among others – with lots of touristy shopping options along the way.

After spending the night in one of the creepiest 1 star hotel rooms we’d had, and having several questionable meals, we were about to call the tour a complete bust. Then, on the final morning we began a series of boat rides from Chau Doc in Vietnam north along the Mekong river which would be our transportation for the last few hours to our designated border crossing into Cambodia. It was peaceful and beautiful and also felt like a great way to see a slice of real life along the Mekong. The boat trips more than made up for the previous day. 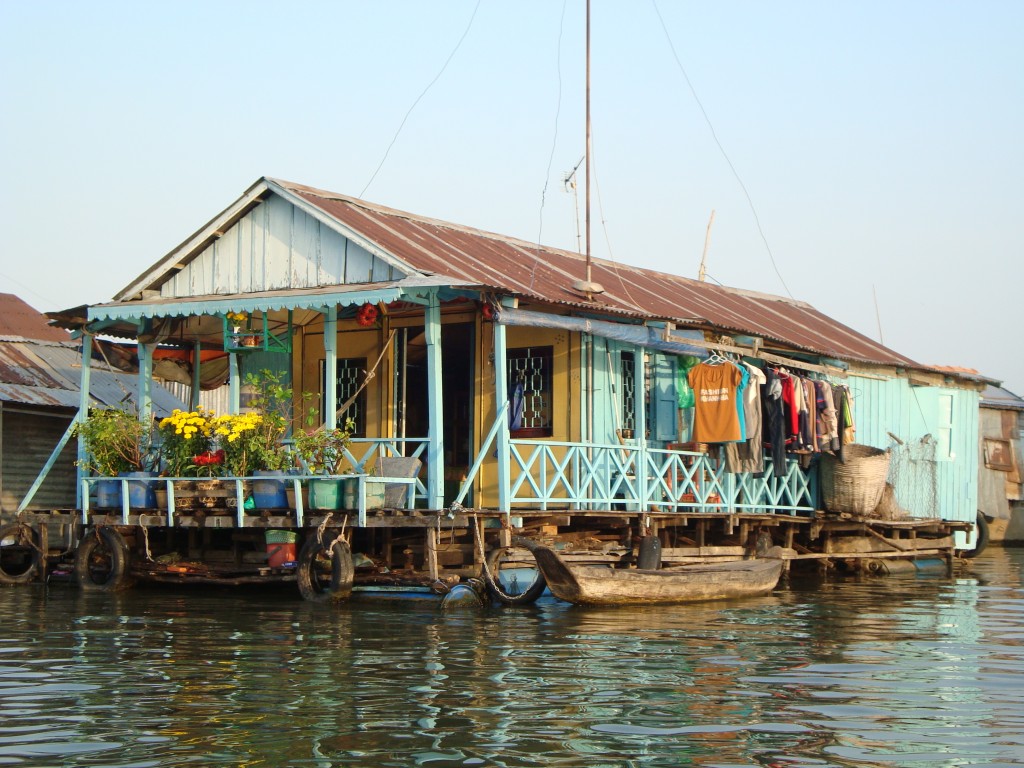 House in a floating village on the Mekong. 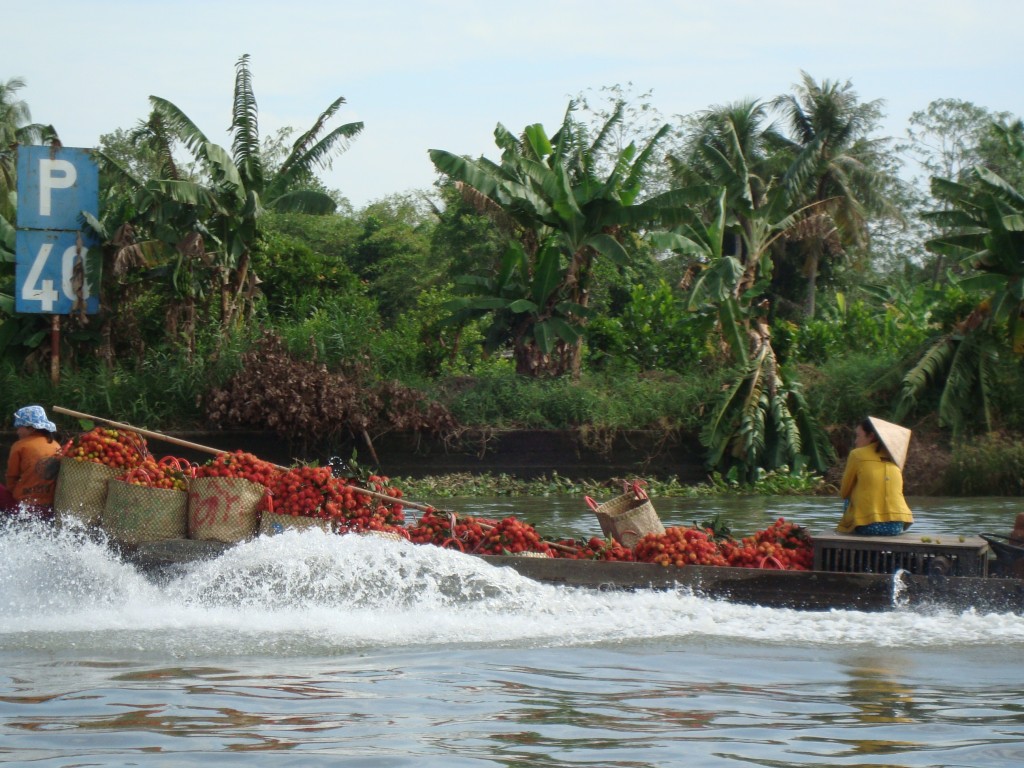 A tomato boat in a “floating market” on the Mekong

On a bamboo walkway we took to see a Muslim village and mosque in southern Vietnam. 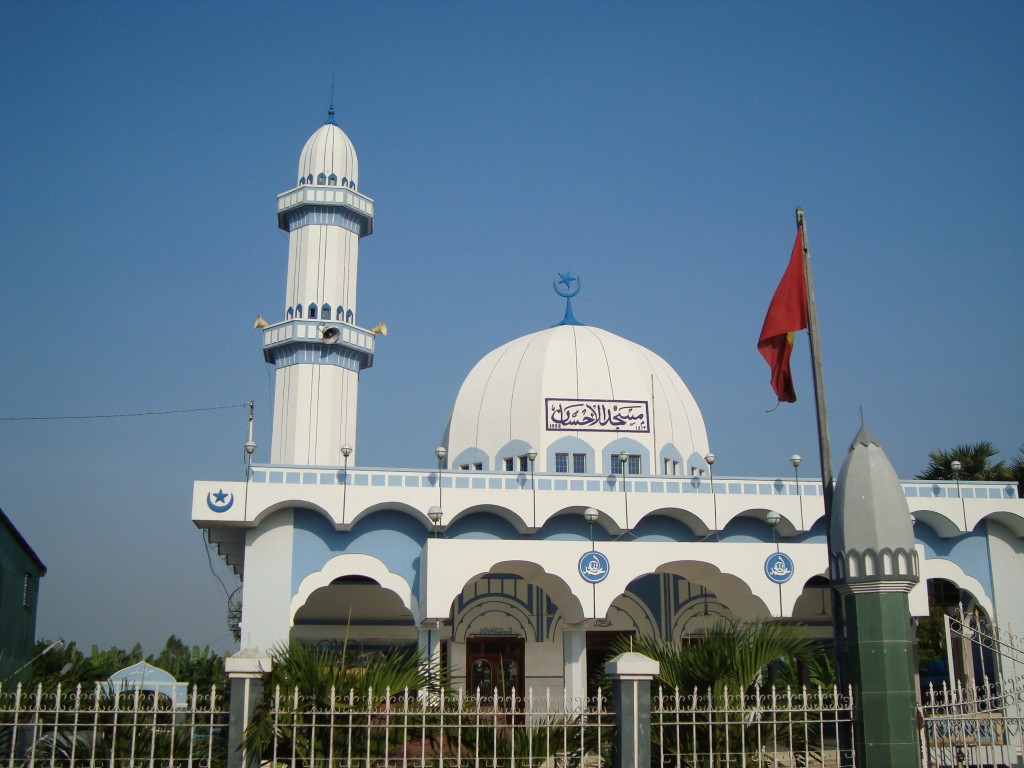 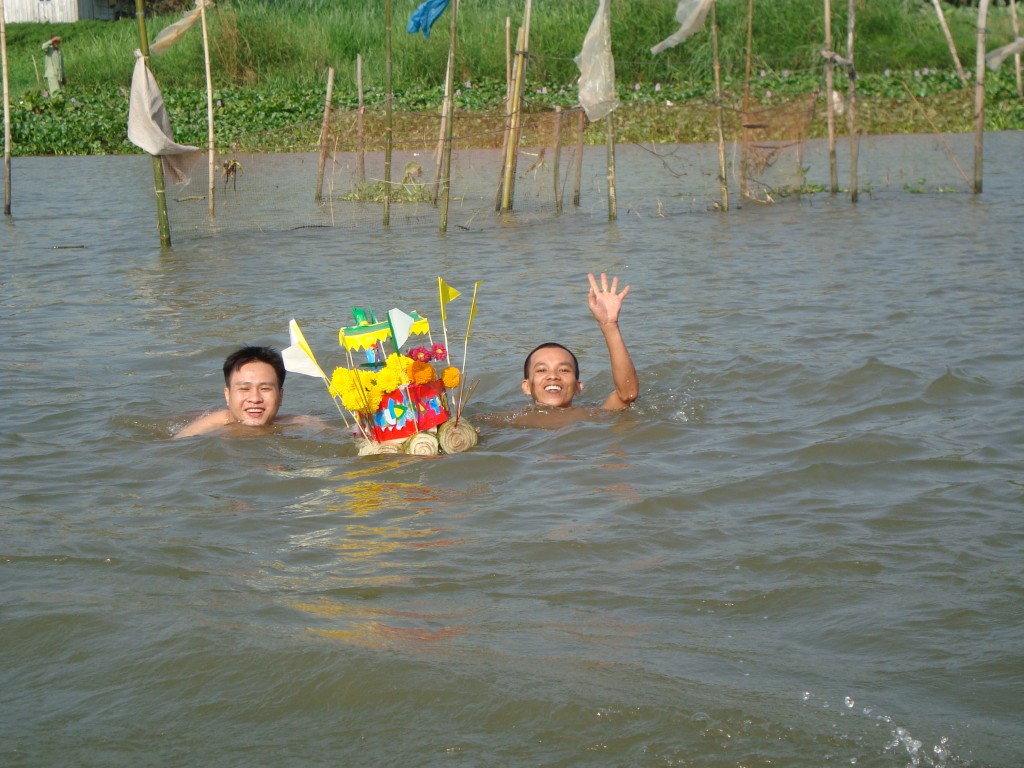 We passed these boys releasing a float for Tet. 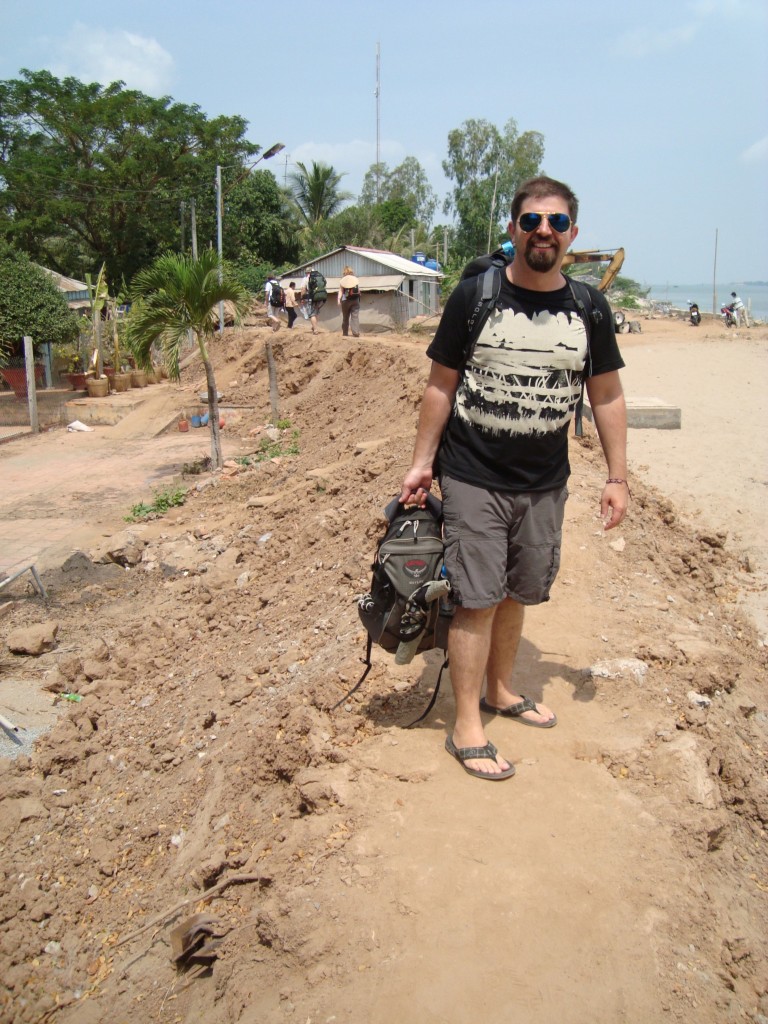 Built-up dirt path from the river to the first border check point. 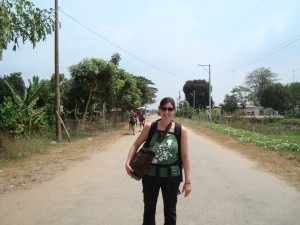 Later on the (now-paved) path to the first border check point.

When we got off of the last boat, we were in Cambodia, and it was our most interesting border crossing of the trip. The extreme heat and more primitive physical conditions of this crossing made if feel like our most adventurous entry into a country.

We had to walk quite a ways on foot from the river to the first check point. Of course, we were snapping photos which quickly brought several guards running toward us forcefully screaming “no photo! no photo!” So we put the camera away and went through a second check point where our tour van and guide were waiting on the other side. How did it get there without us while we had to walk? We had no idea. At the second check point, one guard very slowly and meticulously approved the visas for each of us in our group of 7 while we patiently stood by with sweat running off of us in small rivers. Behind our guard, two officers were openly playing computer games. I’d like to think they were on a lunch break.

It was a long two days, but after our successful border crossing we were pretty happy to get into an air conditioned minivan for the final couple of hours to Phnom Penh. 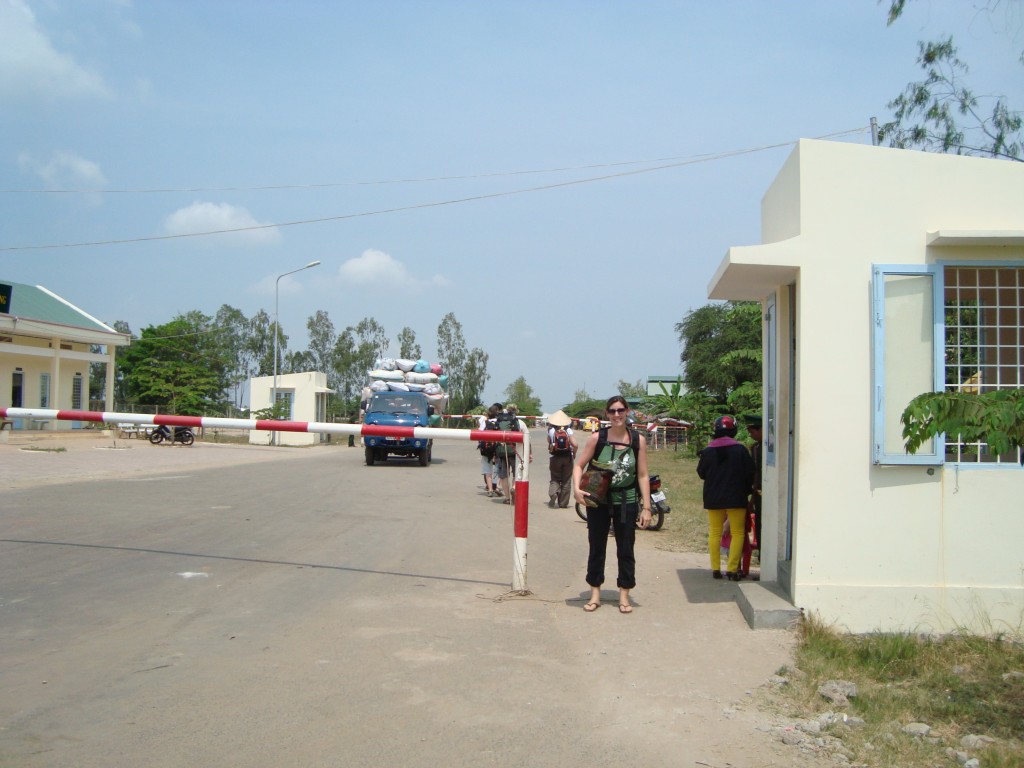 At the first border check point, right before we were told to stop taking photos. 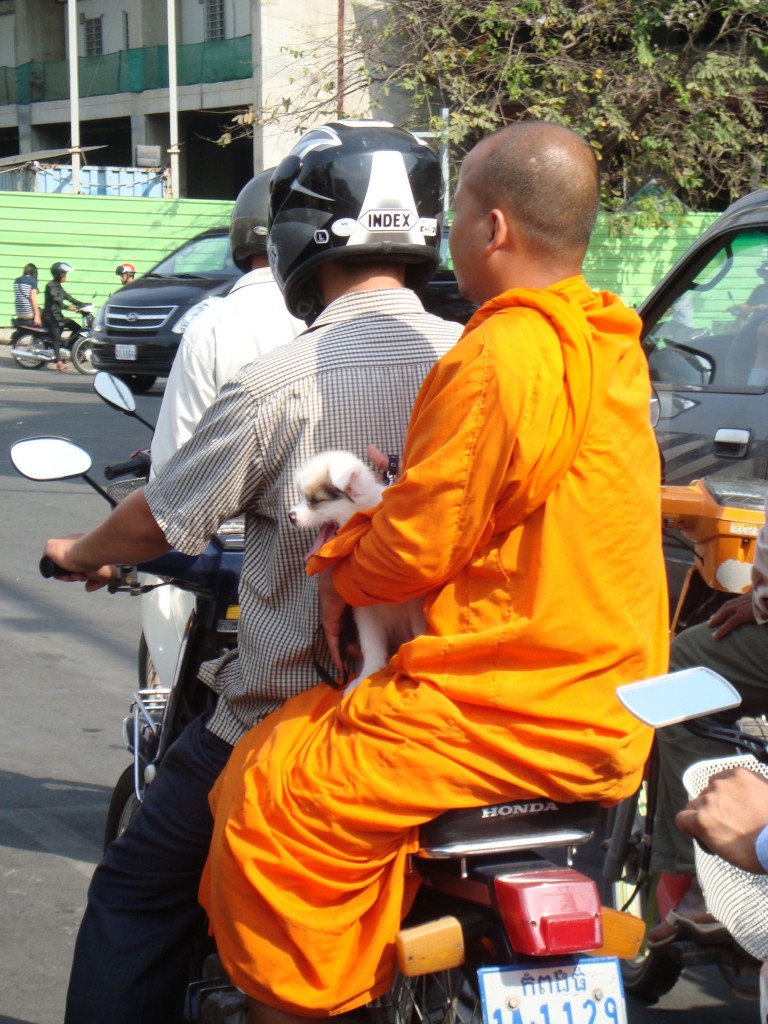 And, this is one of the first sights we saw upon arriving in Phnom Penh.