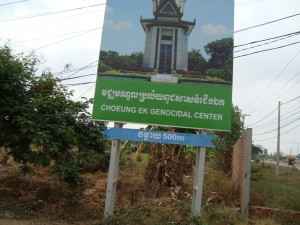 It would be hard to share our experience in Cambodia without mentioning the genocide that took place at the hands of Pol Pot and the Khmer Rouge in the late 1970s. It seemed to us that understanding anything about the current state of affairs and the Cambodian people required knowing more about this recent history. So this is a depressing post, but one I thought was important to write before we go on to share our other experiences in Cambodia. 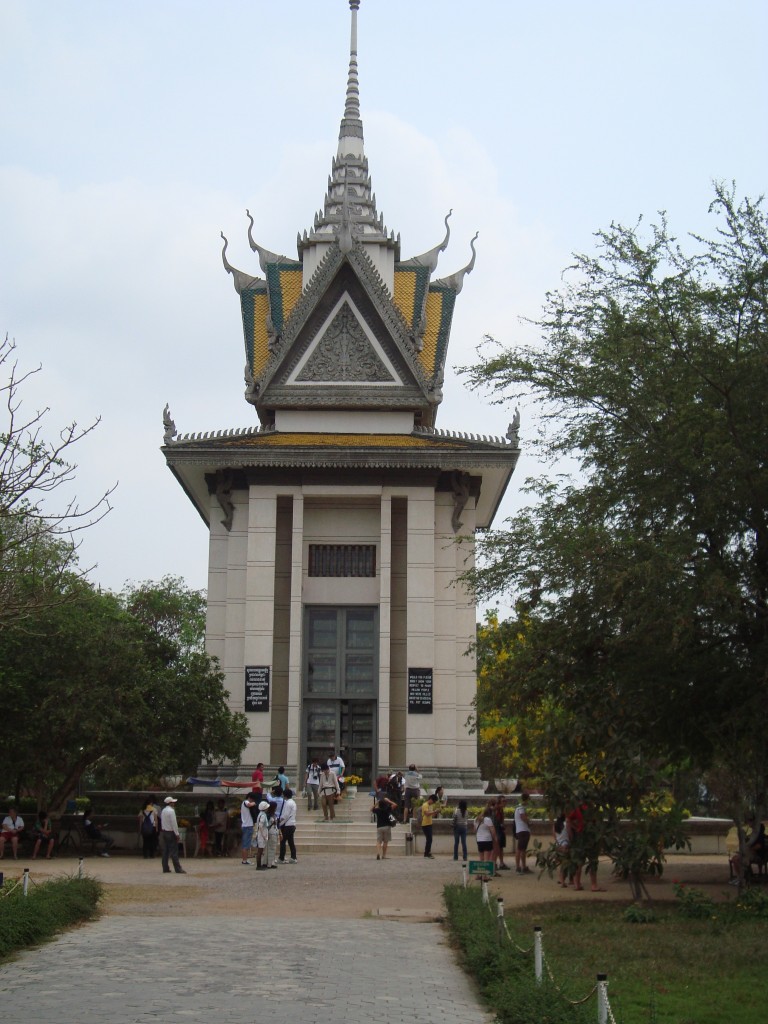 During the period from 1975-79 after the end of the Cambodian civil war, the communist revolutionary Pol Pot wanted to return the country to an agrarian socialist society, to which end he tried to institute ‘year zero‘ meaning that ‘all culture and traditions within a society must be completely destroyed or discarded and a new revolutionary culture must replace it, starting from scratch. All history of a nation or people before Year Zero is deemed largely irrelevant, as it will (as an ideal) be purged and replaced from the ground up.’

The Khmer Rouge regime, under Pol Pot, arrested and eventually executed almost everyone suspected of connections with the former government or with foreign governments, as well as professionals and intellectuals. In Cambodia, teachers, artists, and intellectuals were especially singled out and executed during the purges accompanying Pol Pot’s Year Zero. Ethnic Vietnamese, Thai, Chinese, Cham, Cambodian Christians, and Budhhists monks were targeted and killed. Most families were separated, and Pol Pot even killed many of his closest co-conspirators and friends. It is estimated that somewhere around 2 million people were executed or died from starvation over the 4 year period, and there are many mass graves around the country, several of which we visited while we were there. You can read more about the history here.

It is the kind of knowledge that makes you sick to your stomach and just at a loss for even how to process it. While in Phnom Penh we visited The Killing Fields, the largest site of mass graves from the Khmer Rouge Regime. The whole area is now the largest memorial to those who lost their lives. We thought this memorial was really well done. Everyone gets a headset so that you can walk through the grounds at your own pace and listen to the various histories, stories, and some first hand accounts. This was a nice way to handle such a tragic place and allowed everyone to keep to themselves and reflect, which was much better than having to interact with other tourists or guides while hearing about this unfathomable history. 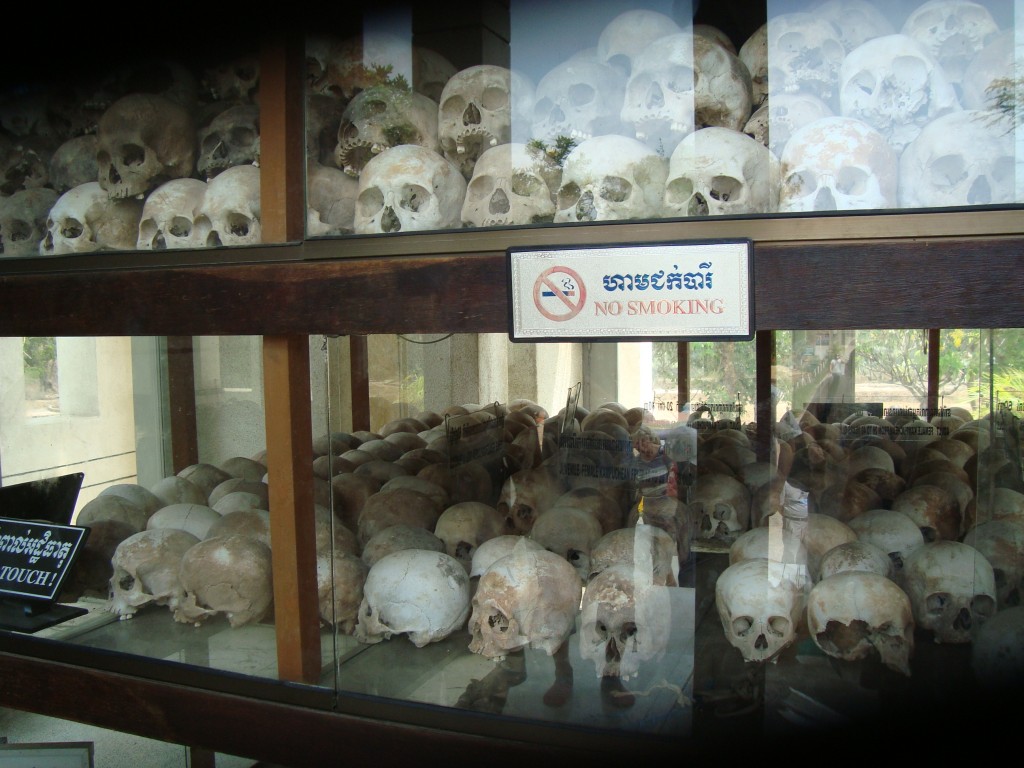 There are 7 levels in the memorial stuppa, each filled with skulls, bones, and clothing from the victims. 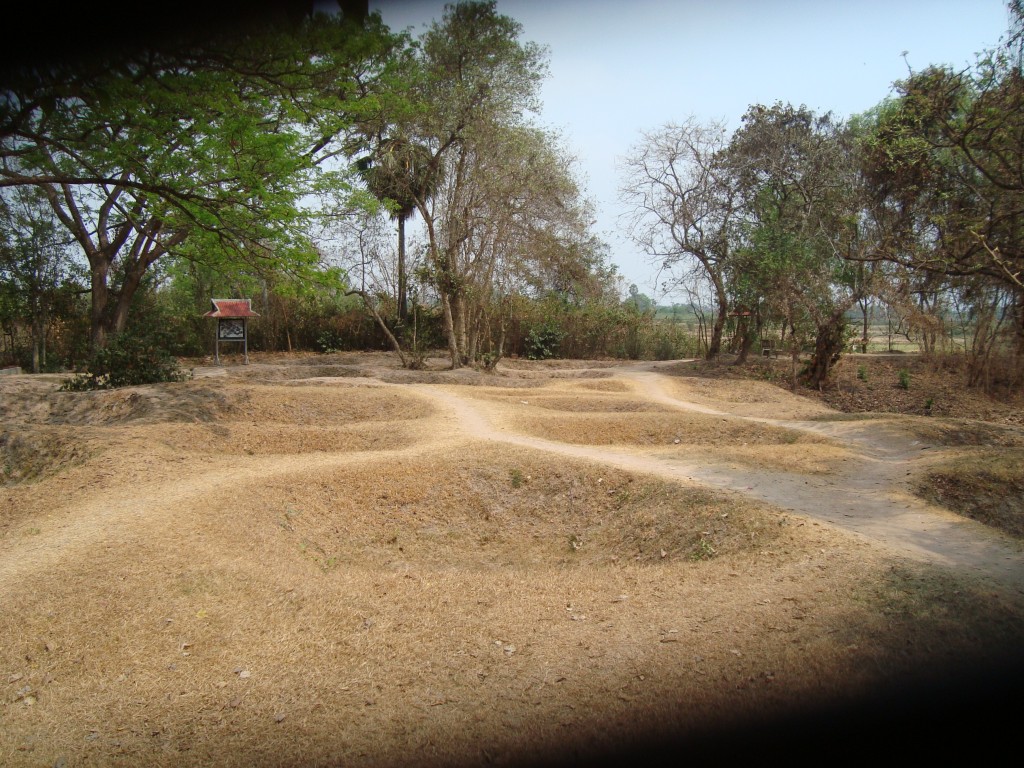 Mass graves that have been excavated and then left as part of the memorial. 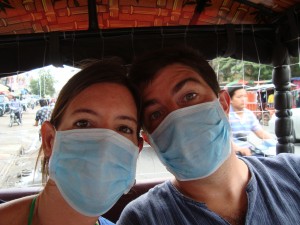 Our tuk tuk driver to the Killing Fields and the prison gave us these masks to wear because the drive was so dusty.

We followed our visit to The Killing Fields by going back into Phnom Penh to visit the Tuol Sleng Genocide Museum at the site of the S-21 prison where thousands of prisoners were held before being taken to Choeng Ek (The Killing Fields) for their execution. This prison was formerly a high school in the middle of the city, and it was just as depressing as you’d expect. In one exhibit, there was room after room of photos of the prisoners. The Khmer Rouge kept meticulous records about its prisoners and many of them were forced to write up and sign false statements admitting to some made up crime against the regime. 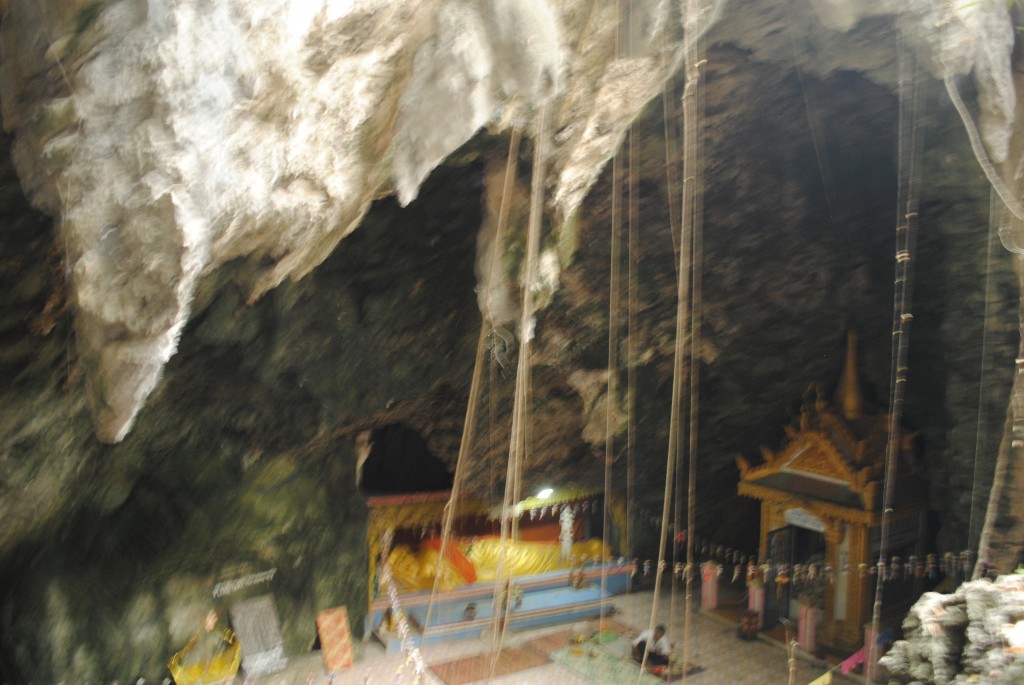 Looking down into the Killing Caves near Battambang, Cambodia. It is now a memorial to those who were executed by the Khmer Rouge and dumped into the caves. The small stupa to the right held the skulls in the photo below. 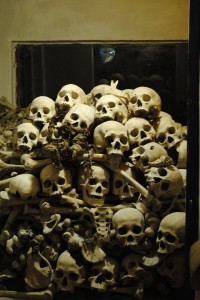 Bones and skulls of the victims of the Khmer Rouge Regime in a memorial at the bottom of the Killing Caves.

We didn’t get to talk to many Cambodians about the genocide. Our conversations with folks were usually limited based on their English abilities, given that we didn’t speak any Cambodian. We felt like asking about the recent genocide was a touchy subject to broach if someone else didn’t bring it up first. While visiting The Killing Caves in Battambang, our tuk tuk driver/guide talked to us about it the most, but he hadn’t even born yet when it happened as he is currently in his late 20s. He was separated from his family when he was young, raised by his grandmother on the Thai/Cambodian border, and then sent to live with monks at a monastery for his teen years, which was where he learned English. So it sounded like he life was very much affected by the history even if he didn’t live through it himself. He was a wonderful guide and described some of the paintings and memorials around The Killing Caves, but he also seemed very emotionally detached from what he was telling us. Again, this was one of our few interactions talking with a Cambodian about it, but it wouldn’t surprise us if detachment is a pretty normal coping mechanism in order to just be able to live with this tragic history and move forward.

3 thoughts on “Memorials of the Recent Cambodian Genocide”