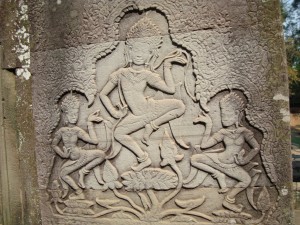 One of the many things about the trip that I hadn’t been expecting was how lonely it would feel sometimes. Luckily, John and I got along surprisingly well for spending 24 hours a day with each other. That said, it would be hard to overstate how happy we were to meet up with our friends from DC during the third month of our trip. (Alex and Camille, thanks for spending a week of your vacation with us!) 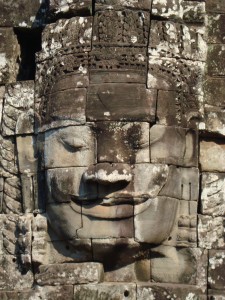 One of the many Buddha faces at Bayon.

The four of us spent about two days touring various ruins of Angkor Wat, a temple complex and archeological park that covers 400 square kilometres (about 150 square miles). No matter how you measured it, the place was huge. Thank goodness Alex and Camille planned ahead and arranged to have a guide with an air conditioned van! I’m not sure I could’ve made it through two days of touring the ruins in the intense heat otherwise. Our guide picked out about 7 ruins for us to visit over two days. She knew the best times to go to each one in order to get the best light and have the fewest crowds. I am sure you could enjoy Angkor Wat without a guide or with a bicycle or tuk tuk, but I’d highly recommend the way we did it. 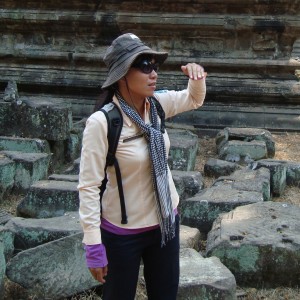 Our fantastic guide for Angkor Wat. Both days she wore two long sleeved shirts, pants, socks, and a backpack with waters for us. I couldn’t understand how she did it in the sweltering heat!

I can’t even begin to describe all of the many cool things about the experience of seeing these ruins, so hopefully the slew of pictures below will give a hint. Oddly enough, while it was really neat to finally see Angkor Wat itself (the one with the five towers that is famous as being the largest religious monument in the world), I have to say my favorites were Ta Phrom, which overgrown by the jungle, and Bayon, a ruin with over 200 large Buddha faces. I think that going in with relatively no knowledge of any of the lesser known ruins added an element of surprise. Either way, it was really amazing to get to see so many of the ruins, to get a feel for their impressive scale, and to learn so much about the history. 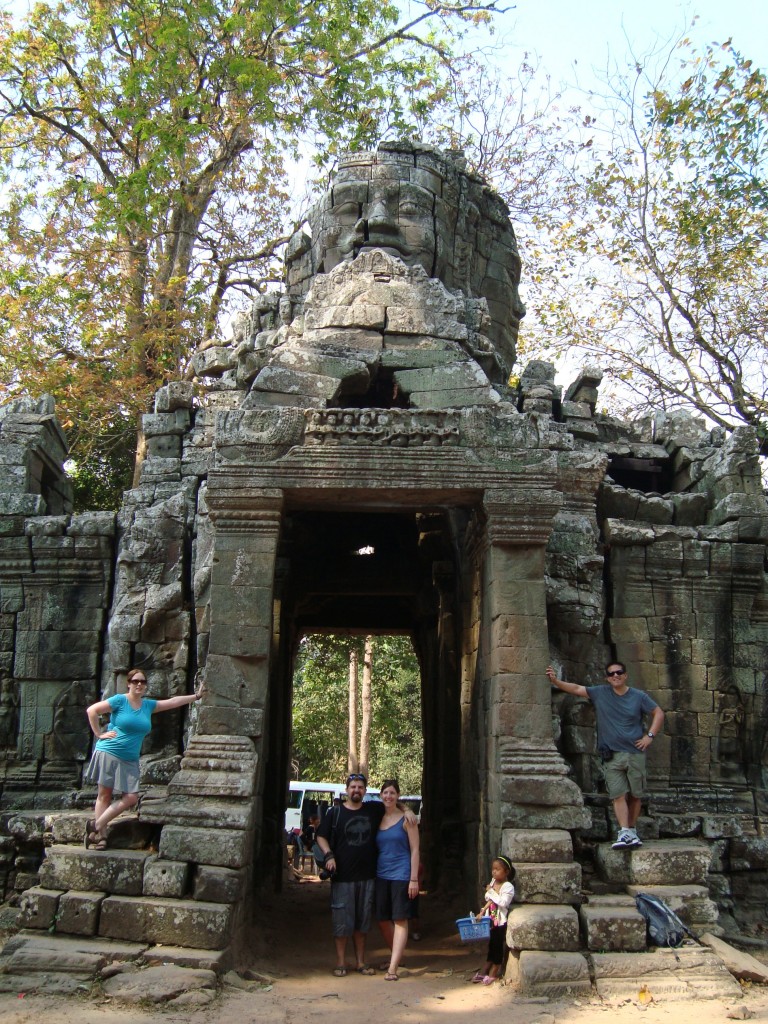 Heading into our first ruin of the day, Angkor Thom (I think). 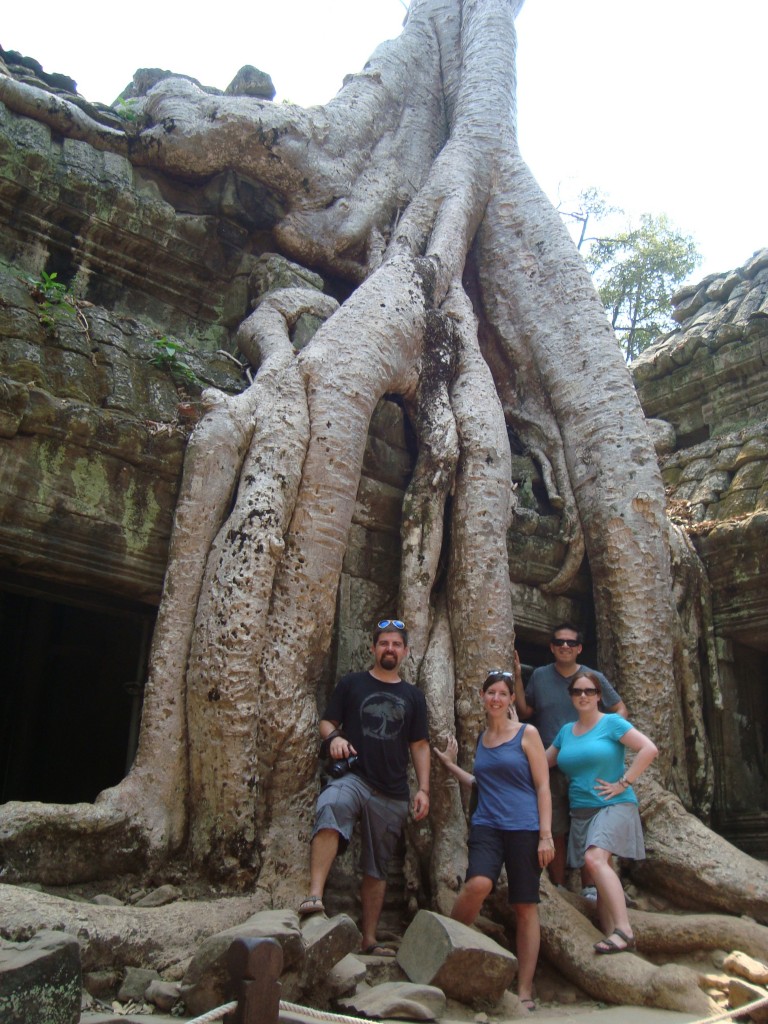 Inside Ta Phrom, aka The Tomb Raider, where said movie was filmed. The jungle has grown over much of the ruins here and looks really cool. 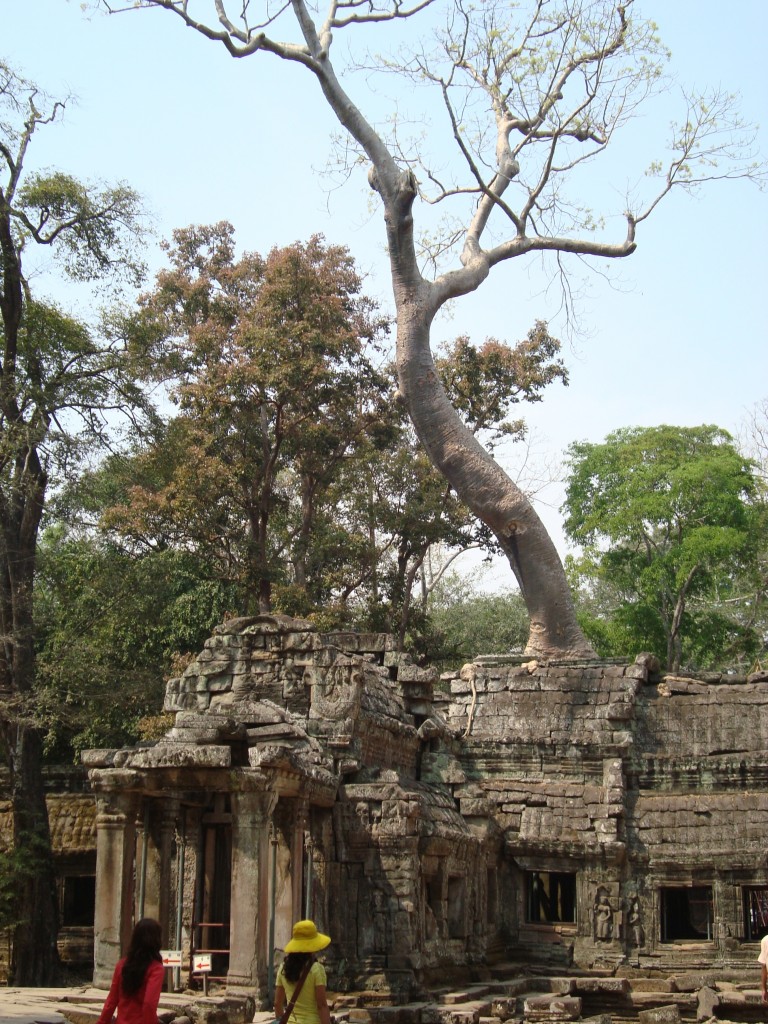 Large tree growing out of the ruins at Ta Phrom 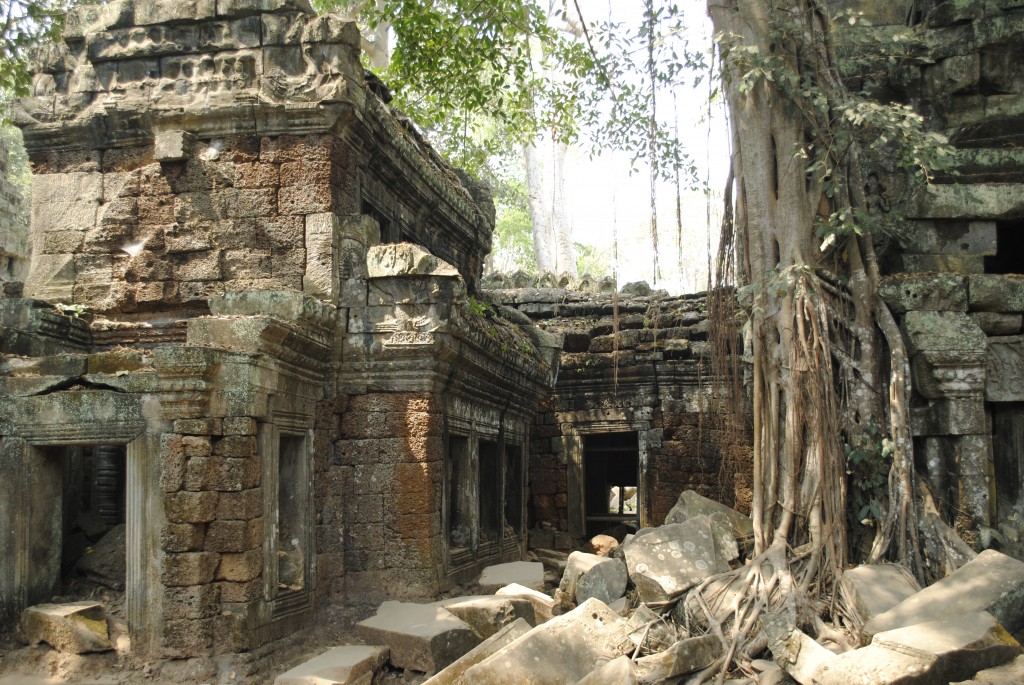 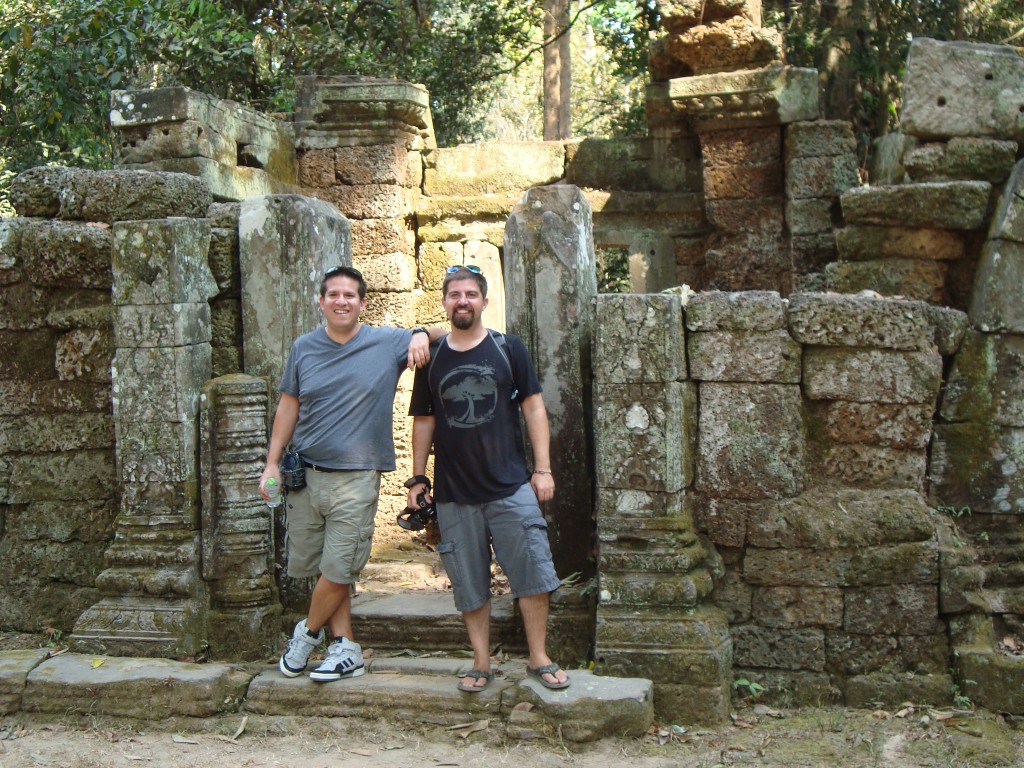 Alex and John in one of the various temples on the first day.

No site is too holy for a crude joke … 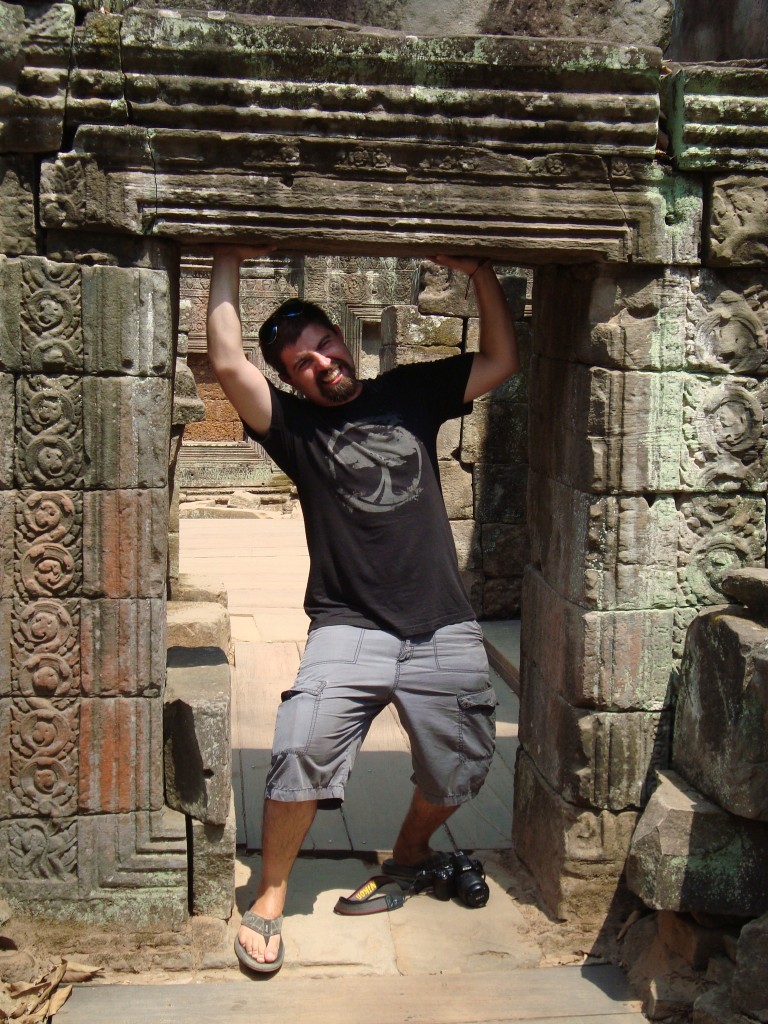 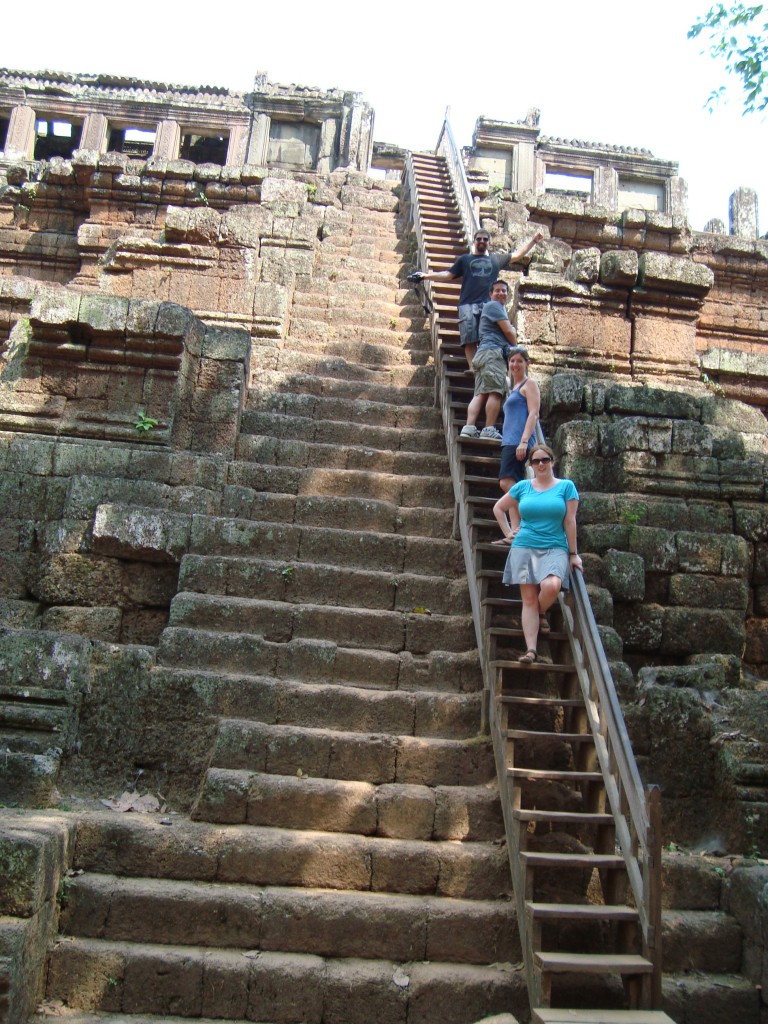 We climbed lots of stairs. 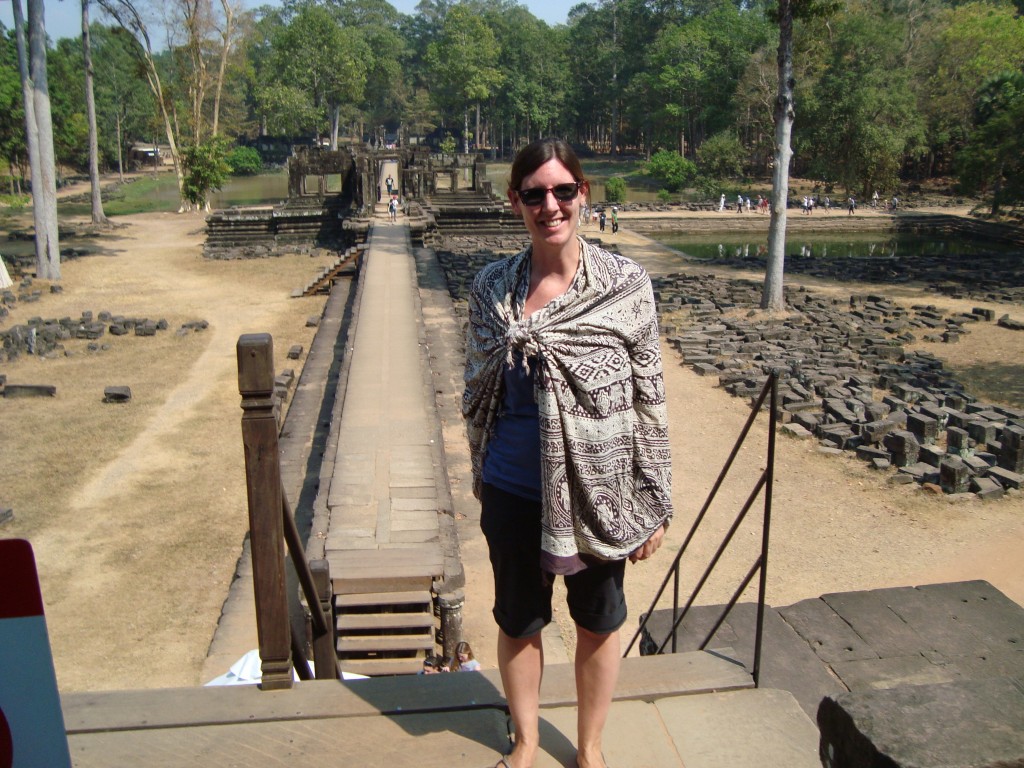 Several of the temples in the complex are active religious sites, so everyone had to have pants, skirts, or shorts to the knees, and women had to have their shoulders covered. This was how I covered up inside those ruins, and it was pretty sweltering. 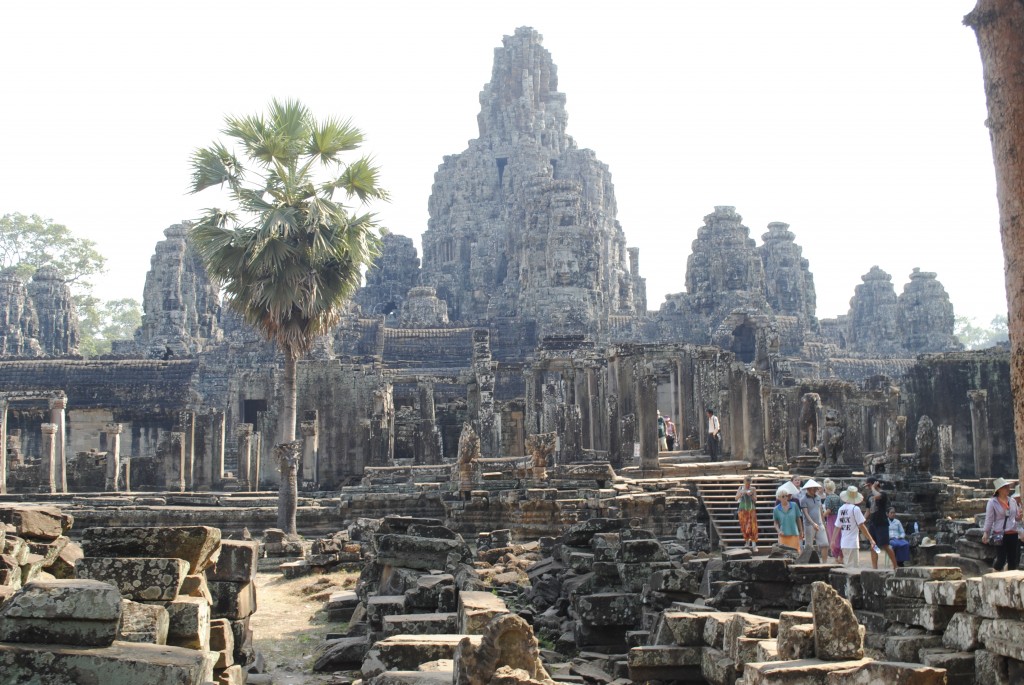 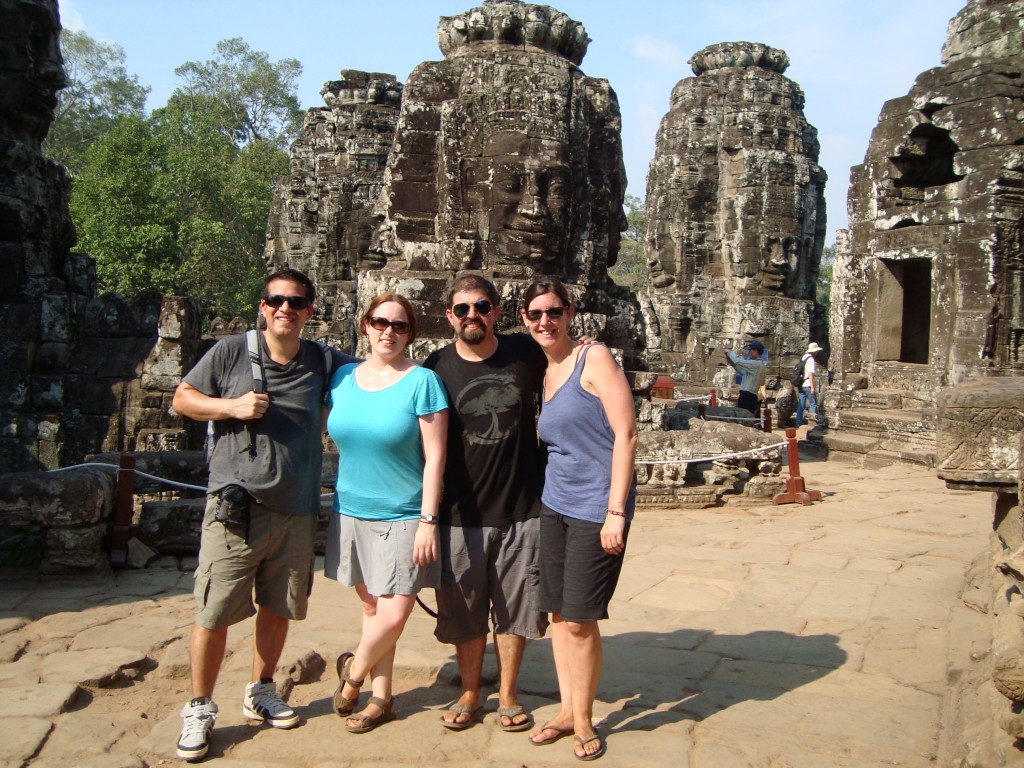 Inside Bayon Temple. There are 216 Buddha faces in this temple. 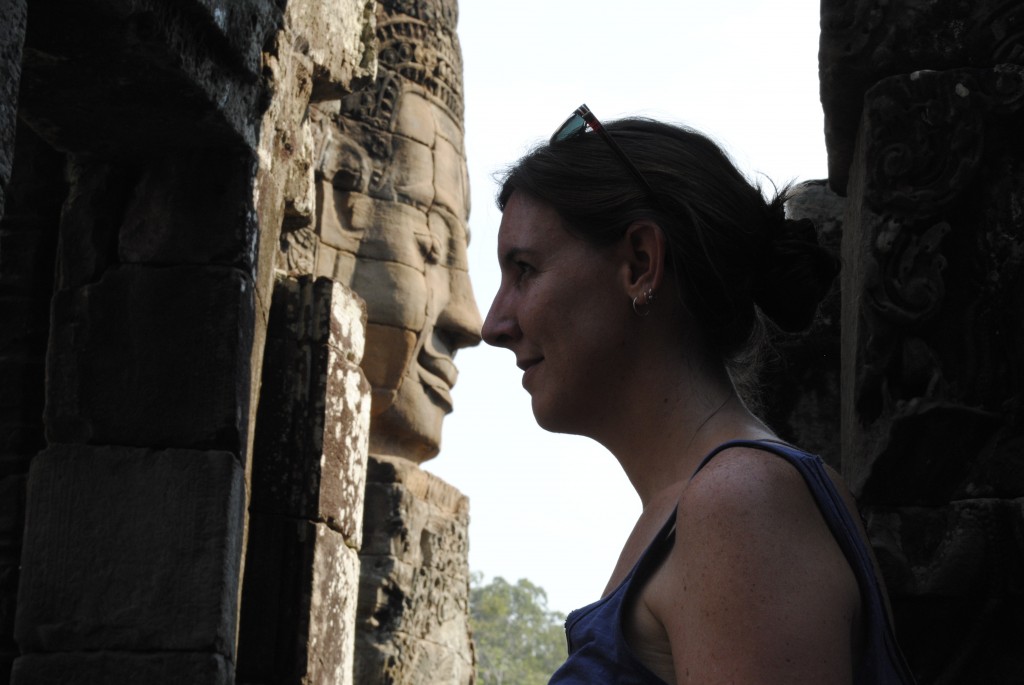 Eskimo kissing a Buddha at Bayon 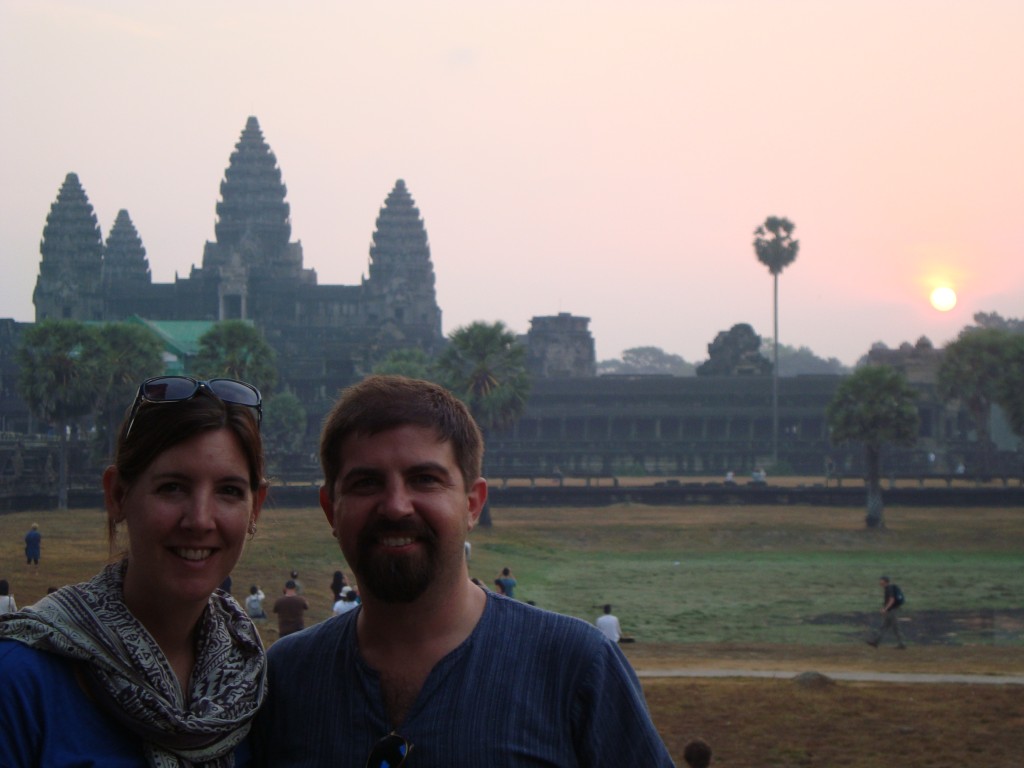 Sunrise over Angkor Wat; we watched from the ruins of the library to avoid some of the crowds. 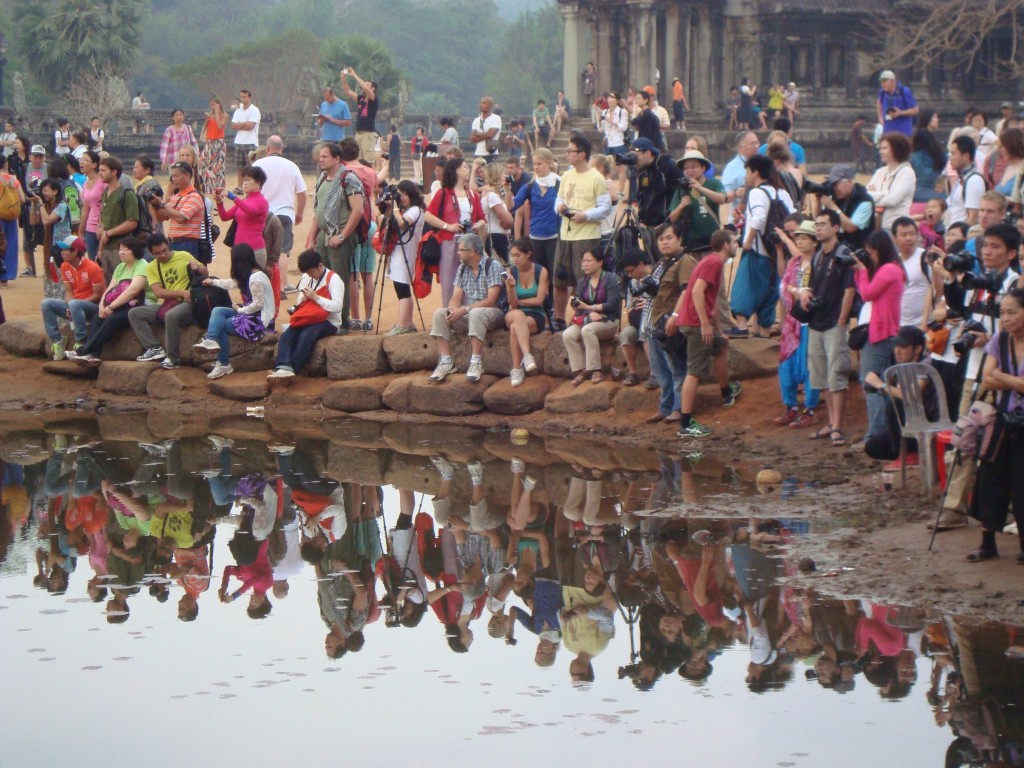 Crowds outside of Angkor Wat at sunrise. The building in the background is where we camped out at sunrise. 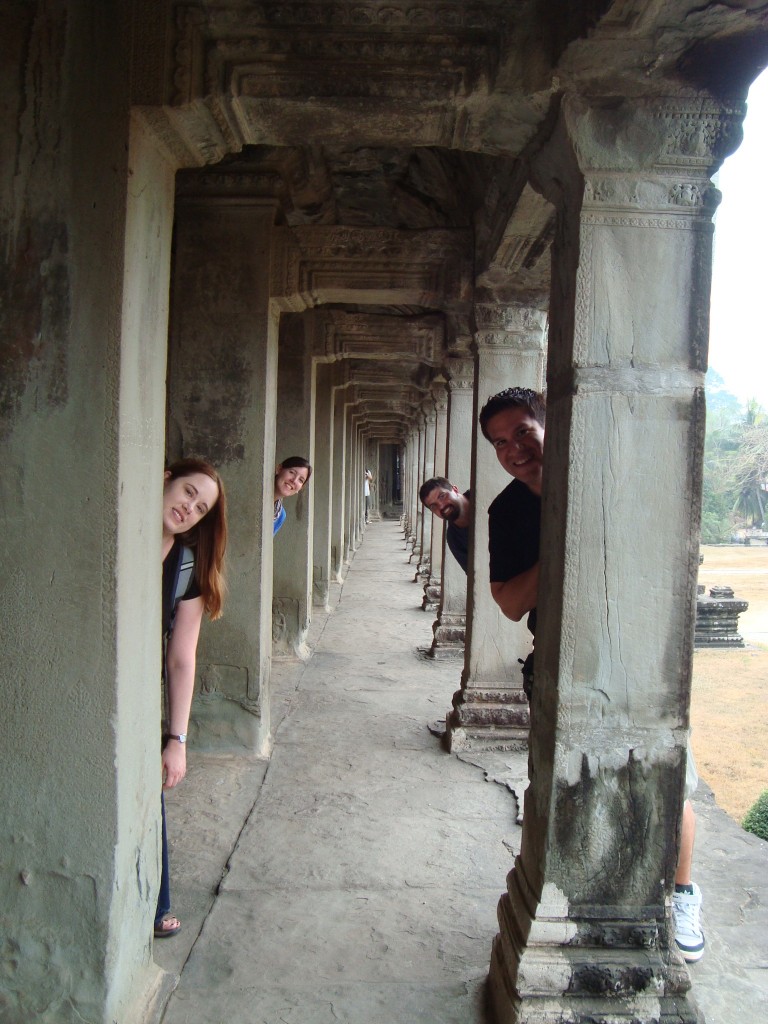 Inside Angkor Wat. It was interesting to learn that while it began as a Hindu temple, it was later ruled by Buddhists. There are carvings and reliefs representing both religions inside. 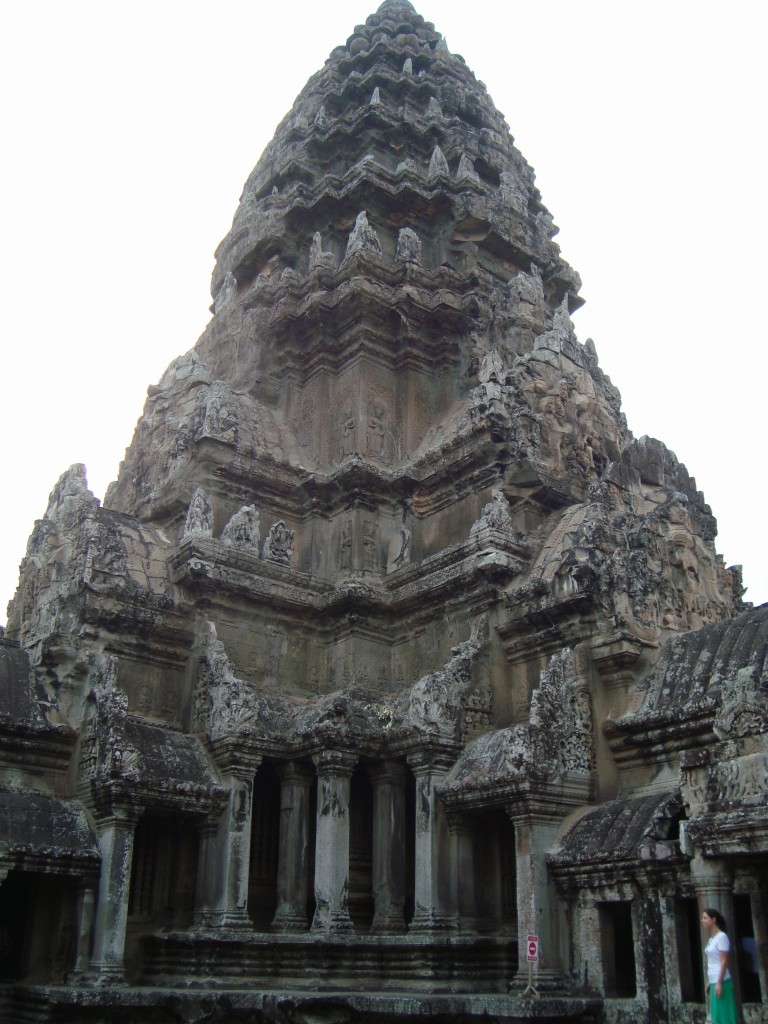 Close up of one of the famous towers of Angkor Wat 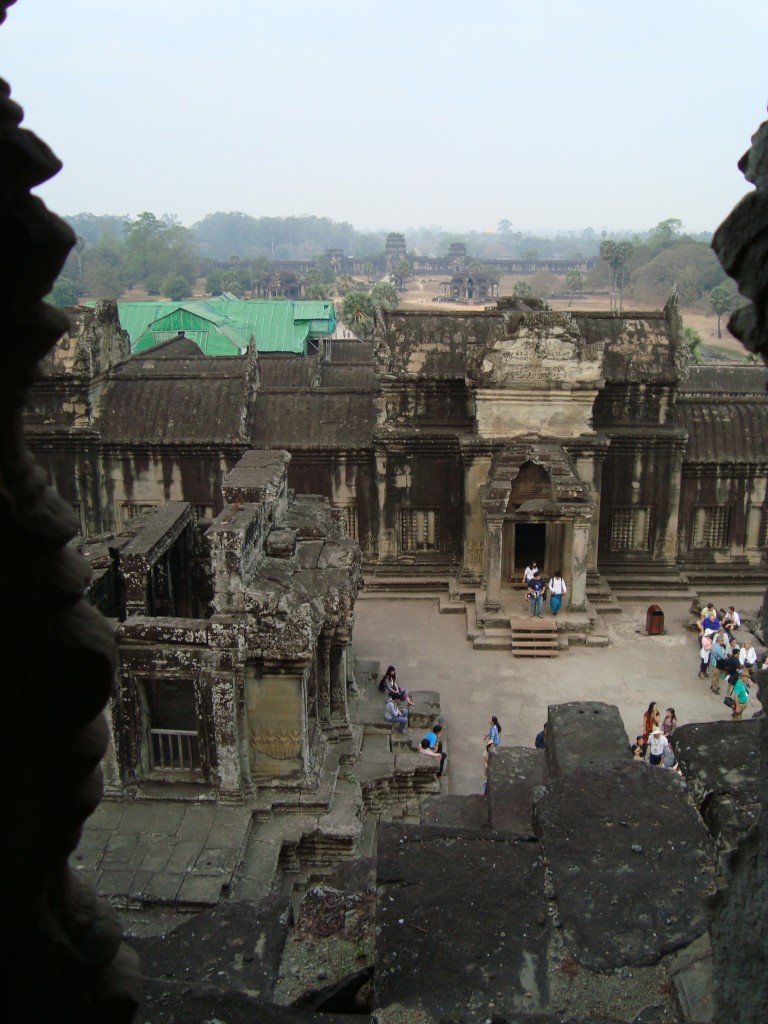 View from just below one of the towers at Angkor Wat 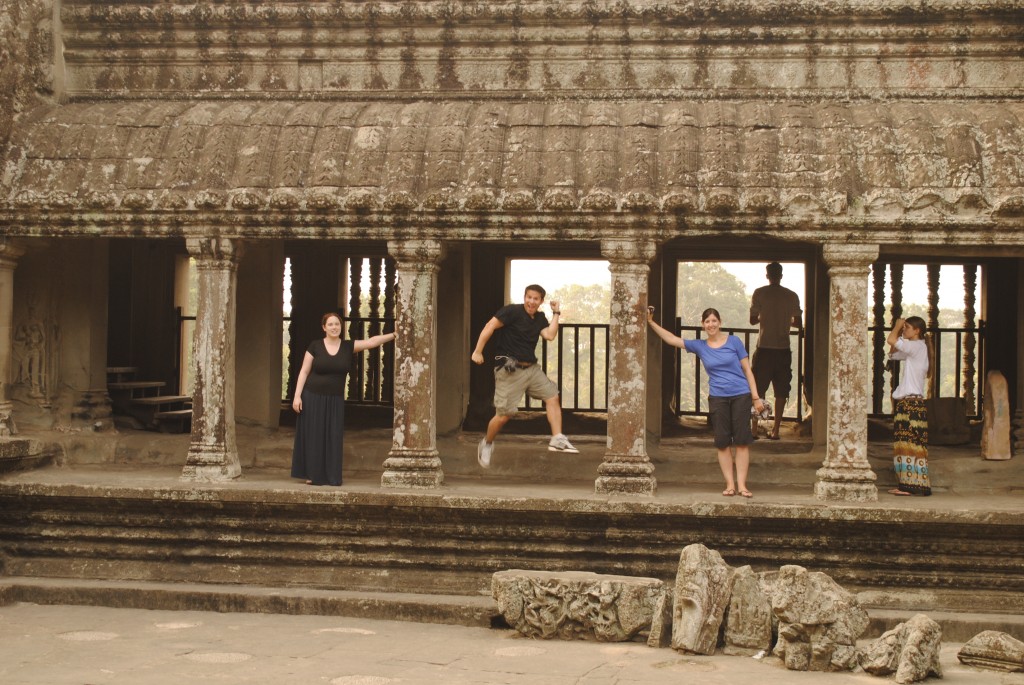 Playing around inside Angkor Wat 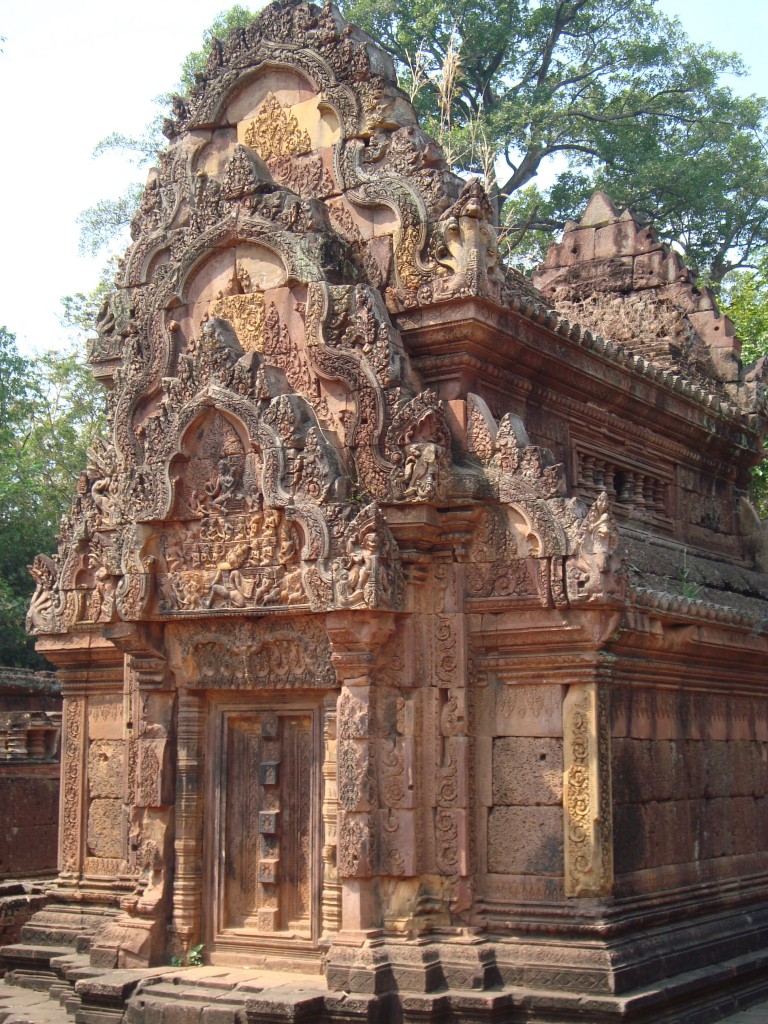 Banteay Srei, (“The Citadel of Women” in Khmer) is a sandstone temple about 35 km from Angkor Wat. It is much smaller and more intricately carved than the larger temples and there are many carvings of female, as well as male, deities. It is also the only temple not commissioned by a monarch, as this one was built for a counselor to a king. 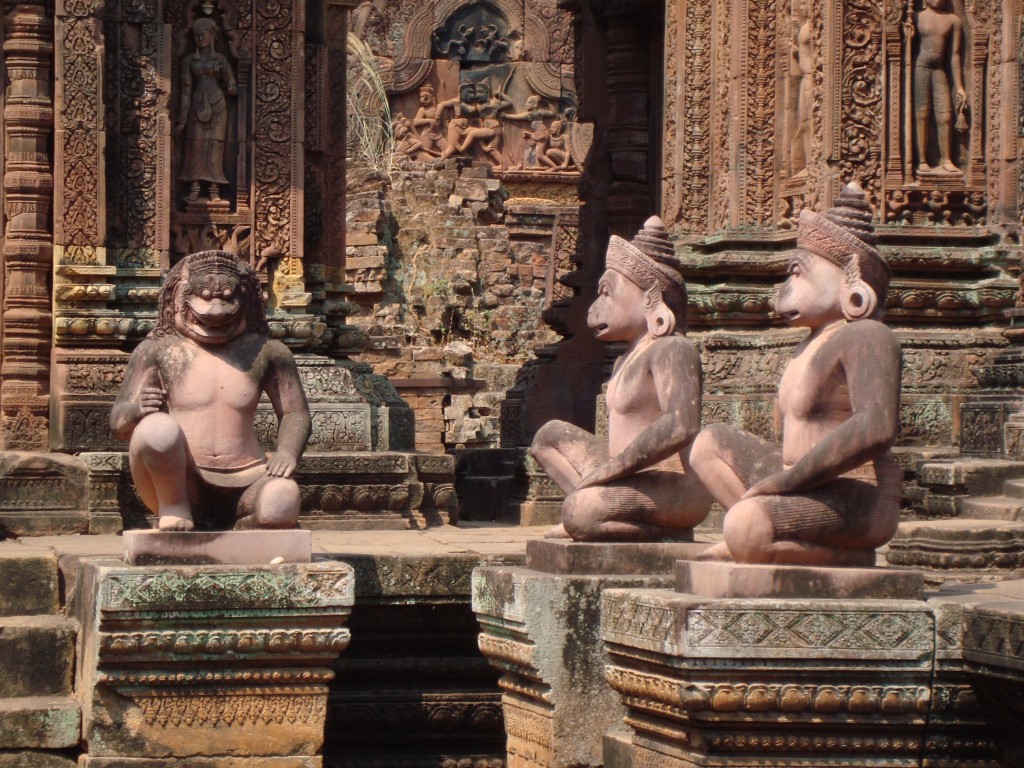 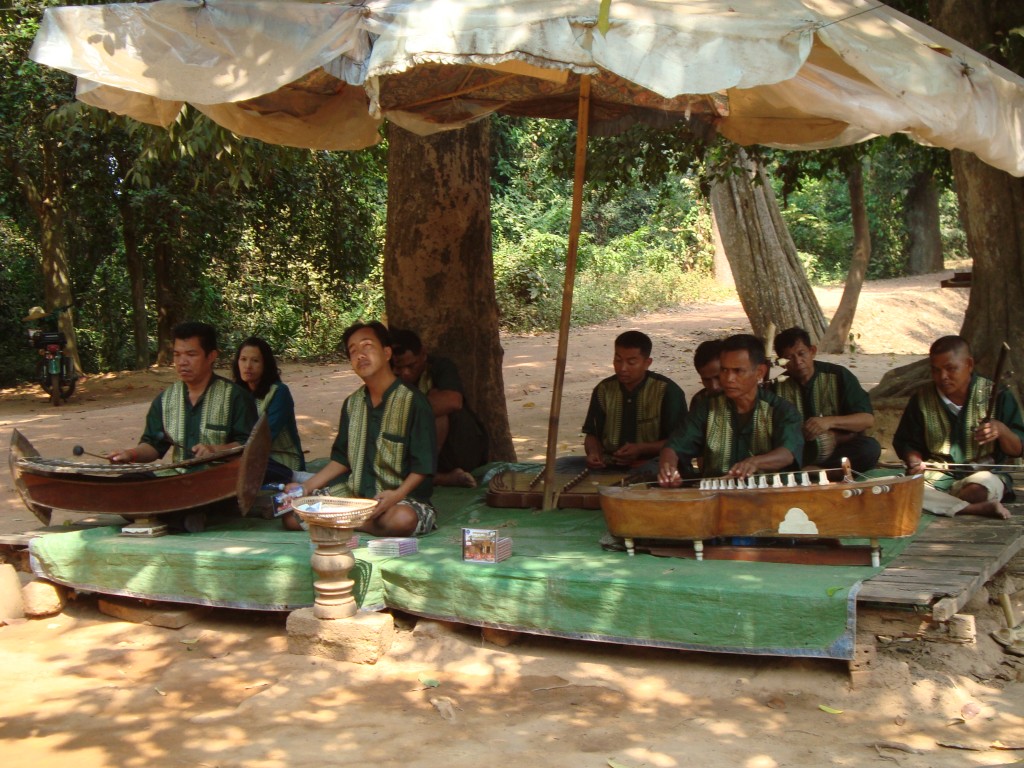 Cambodian musicians playing outside of Banteay Srei. Of all the local music we heard on the trip, Cambodian was my favorite as it reminded me of Bluegrass and Celtic music. 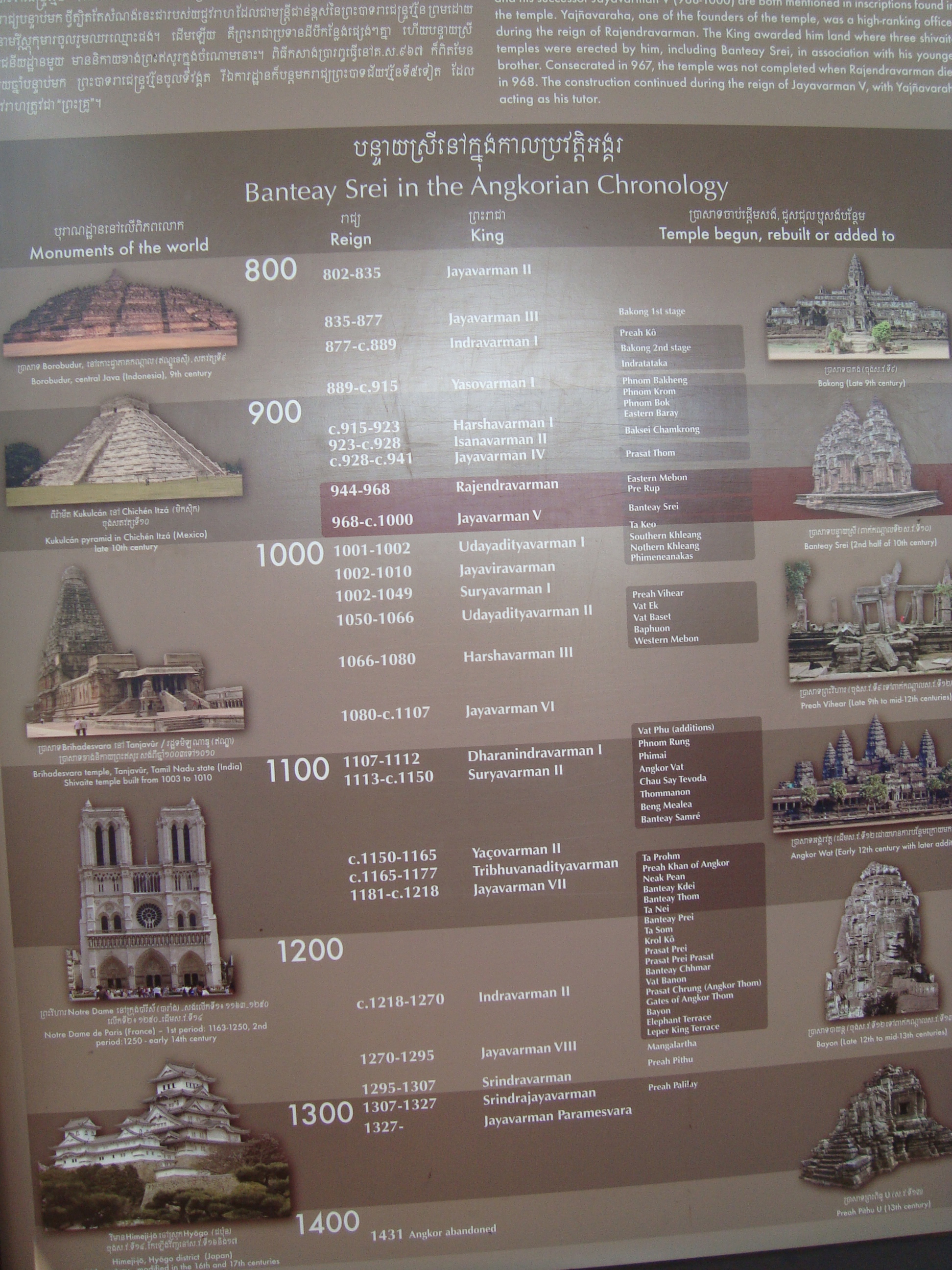 For the history buffs, this was a neat timeline showing all of the Angkor temples down the right side and dating them in the context of other famous temples and monuments listed on the left.

2 thoughts on “Angkor Wat with Alex and Camille”