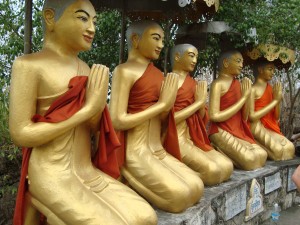 Buddhas at Phnom Sampeau near Battambang

For the most part, our time in Battambang was a few days of relaxing and decompressing after our fun-filled week with Alex and Camille at Angkor Wat. Battambang is a bit of a sleepy town, but this was just what we needed. Lucky for us, many tourists skip over Battambang on their circuit through SE Asia. I think it was the most authentic view we got into the normal lives of Cambodians (when they are not catering to tourists). And because we didn’t have any expectations for what we’d find here, everything we did turned out to be really fun.

In our three days there, we rode the bamboo train, took a cooking class, walked the roughly 4×8 block town numerous times, and visited the nearby Phnom Sampeu (a temple), which is near The Killing Caves (covered in this post about memorials of the Cambodian genocide). We also spent a not insignificant amount of time figuring out how to leave the town and buying bus tickets. 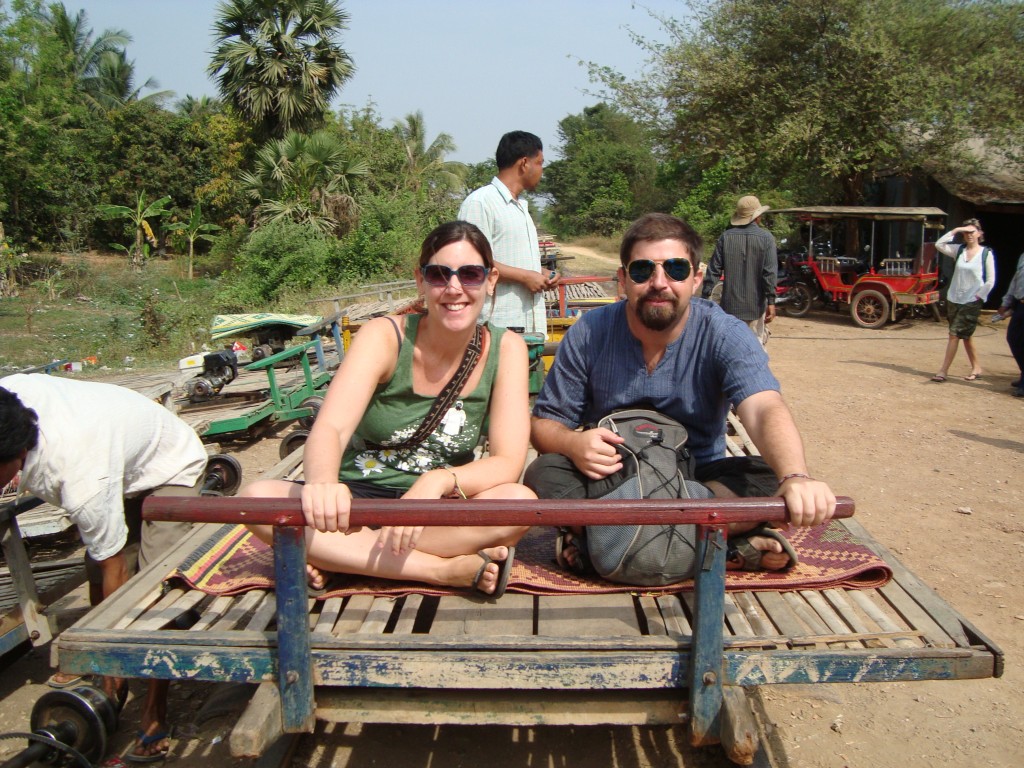 Riding the bamboo train was the main reason we came to Battambang and it was a great time. It only lasted about an hour and did feel touristy, but we went early on a gorgeous yet hot day, so it was pretty refreshing. I just don’t think there is anything like it in the world. Also called a ‘norry‘, the makeshift bamboo platforms on wheels run on old train tracks put in by French colonialists that were mostly shut down during the Khmer Rouge. A small electric generator engine powers the train, and the rails can be a bit warped as they haven’t been kept up. The only bamboo trains still running in Cambodia are in Battambang. Each platform went up to 30 mph and felt like a flat roller coaster (more like the bumpy old wooden kind) going through beautiful green fields and countryside. There was an increased adrenaline rush when we went flying over a few bridges that were quite high above either creeks or creek beds. We saw lots of other tourists taking the ~1 hr roundtrip ride like us, but locals also use the train for transportation and to carry things like rice along the route.

View from the bamboo train

If you run into someone on the track, the platform with the fewest people on it has to pick up and move out of the way for the other one to pass. We probably passed about 5-8 others on our route, but the drivers have the move pretty down pat. 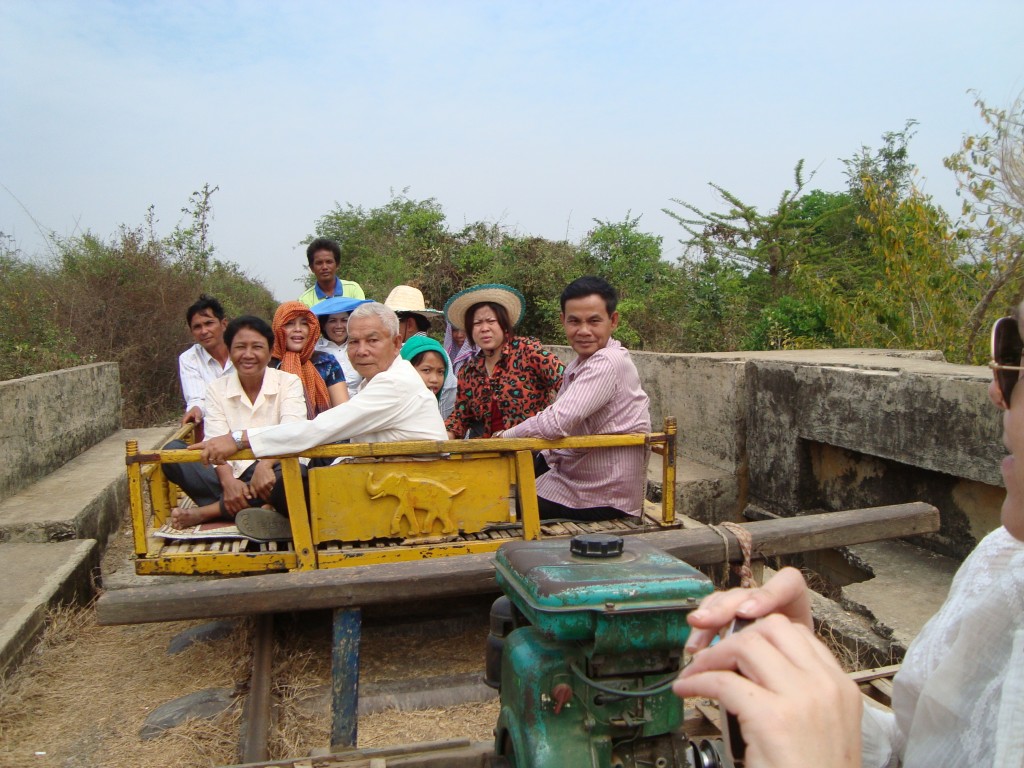 Meeting a platform full of locals heading the opposite direction.

This ‘station’ was the end of the route for tourists – where we all got off and sat at a few tables while locals tried to sell us stuff. 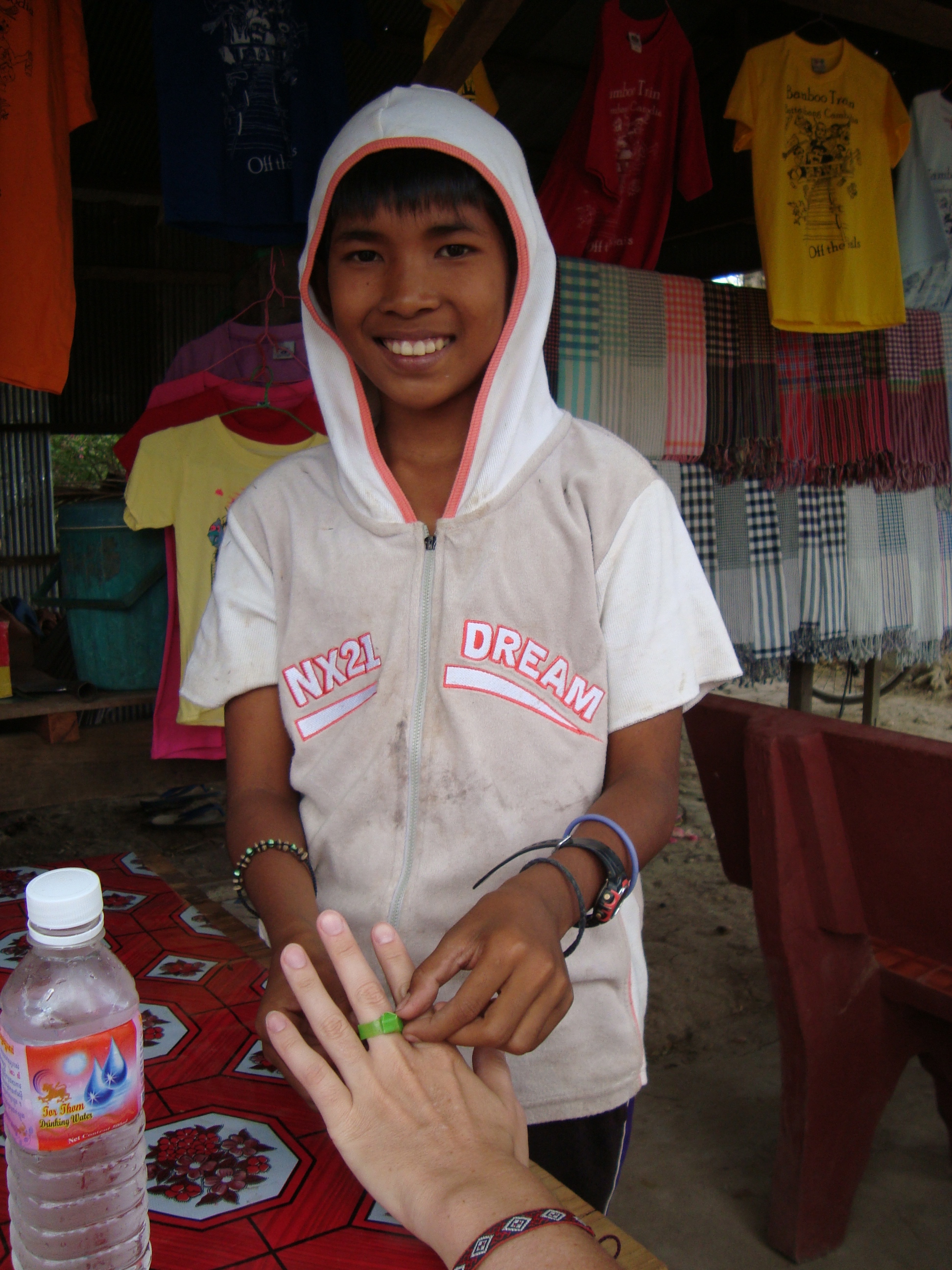 The kids at the end of the train ride make homemade jewelry out of bamboo leaves, and give it to you while insisting it is ‘free, no money’. Of course I gave this kid a dollar, but I insisted he share it with his friends (who were also pushing their wares on me) and they all ran off squealing “she said share! she said share!”. I wasn’t sure if that was a good thing to do or not.

Our cooking class in Battambang was one of my favorite activities on the whole trip. We had a really great instructor who owns his own restaurant called “The Smokin’ Pot.” The sign has a large smoking black cauldron on it so not that kind of pot (although we did learn that marijuana is used as an herb in traditional Cambodian cooking). At $10 for a 4+ hour class that included a trip through the market to buy everything we needed, this was a great deal. Since we didn’t have the opportunity to cook for ourselves on the trip, we didn’t often take the time to saunter through markets and never bought greens, fresh fish, or meat. But with our Cambodian instructor leading the way and conducting the transactions, we got a firsthand glimpse into a very traditional experience. We bought all of the food for our meals straight from the local market and then prepared it ourselves, which was (sadly) an uncommon experience for me. 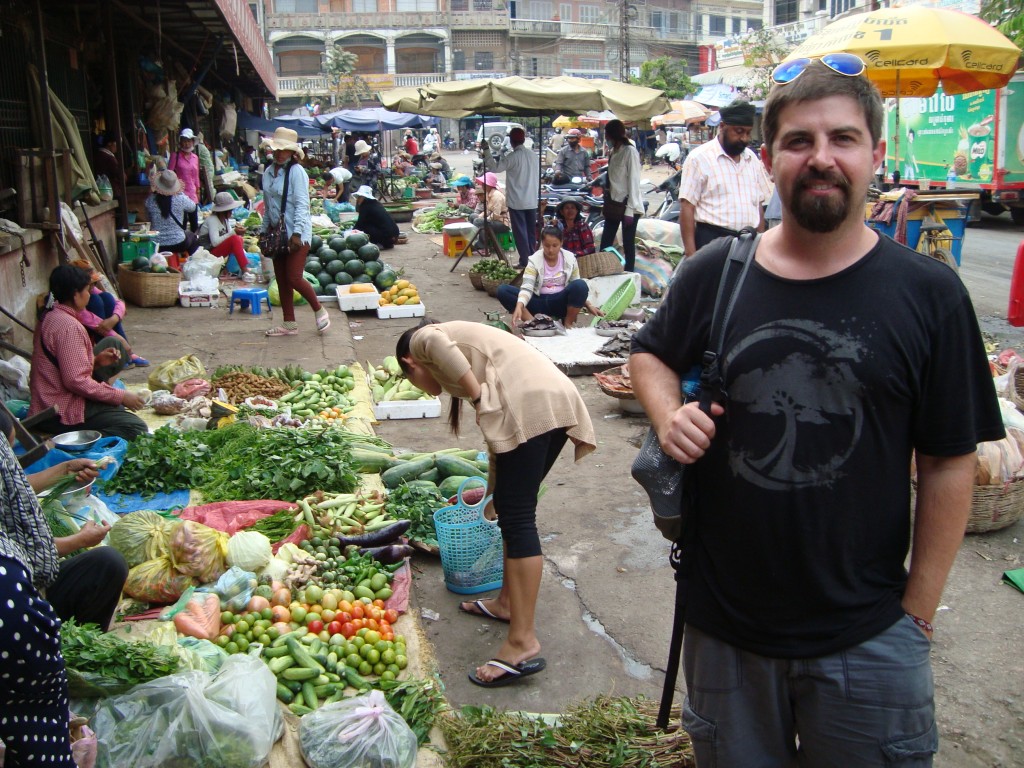 At the market to buy food for our cooking class. 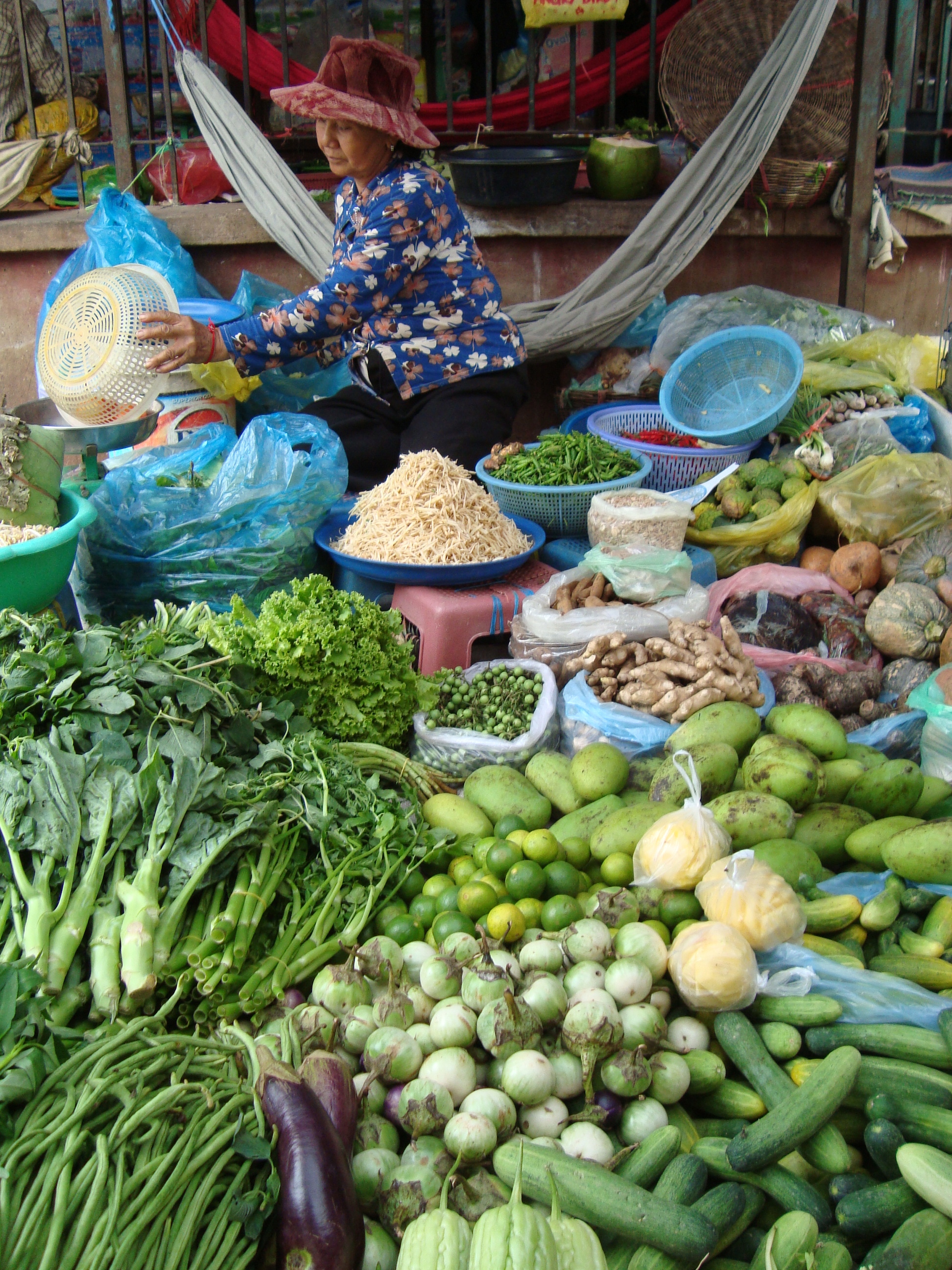 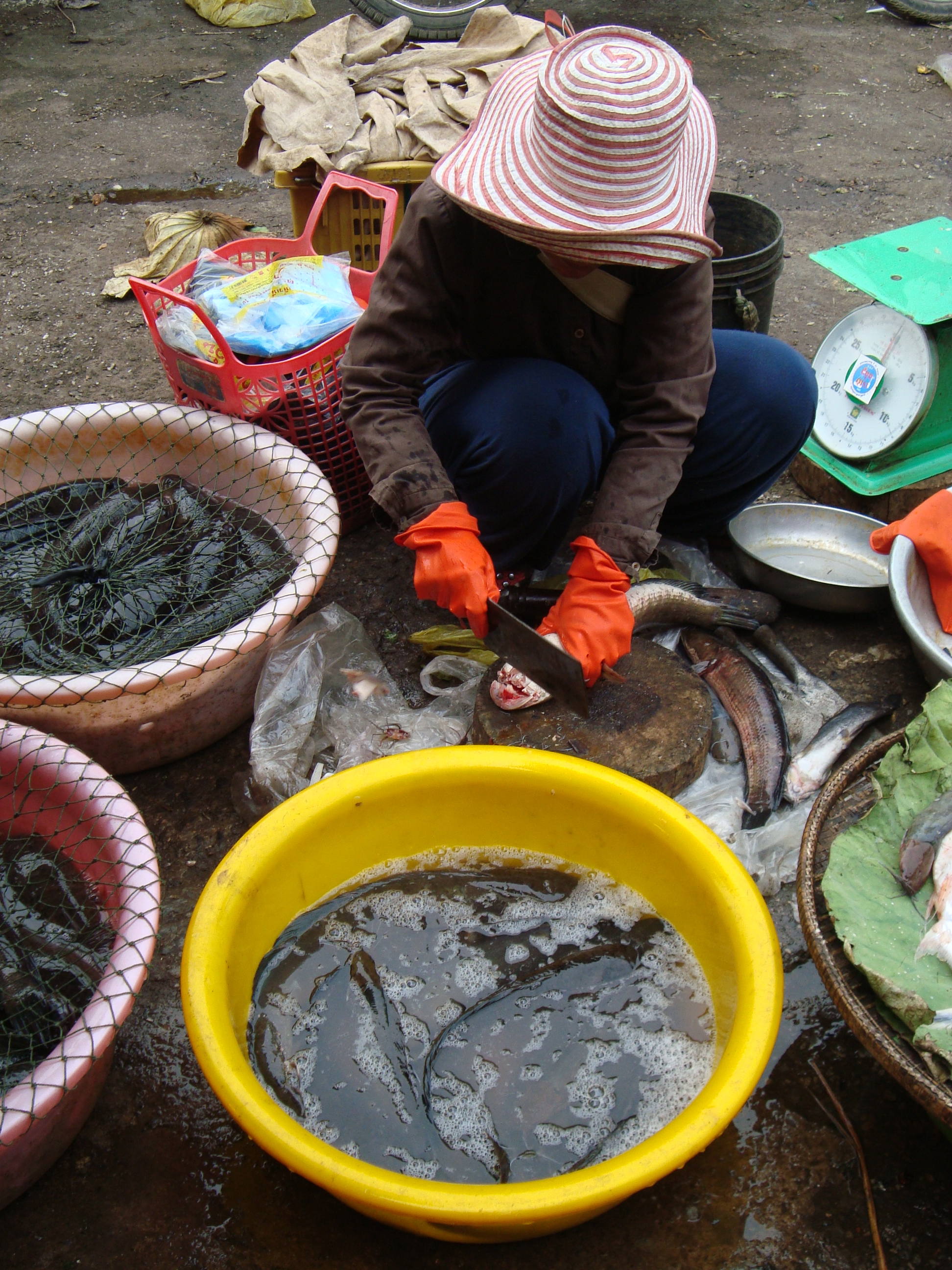 This woman cut the head off of the fish right in front of us. 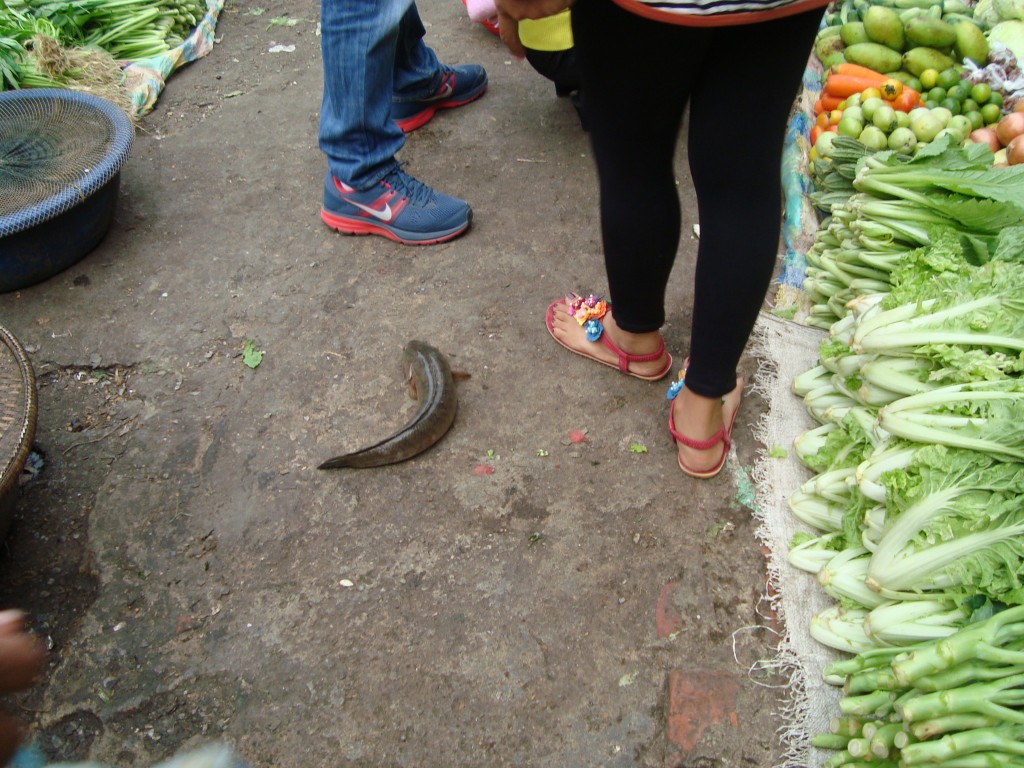 If a fish flipped out of its bucket, they just left it as if nothing had happened. I’ll admit that it kind of freaked me out to stand next to this fish knowing it couldn’t breathe, even though we were having another fish slaughtered right in front of us to eat later that evening. 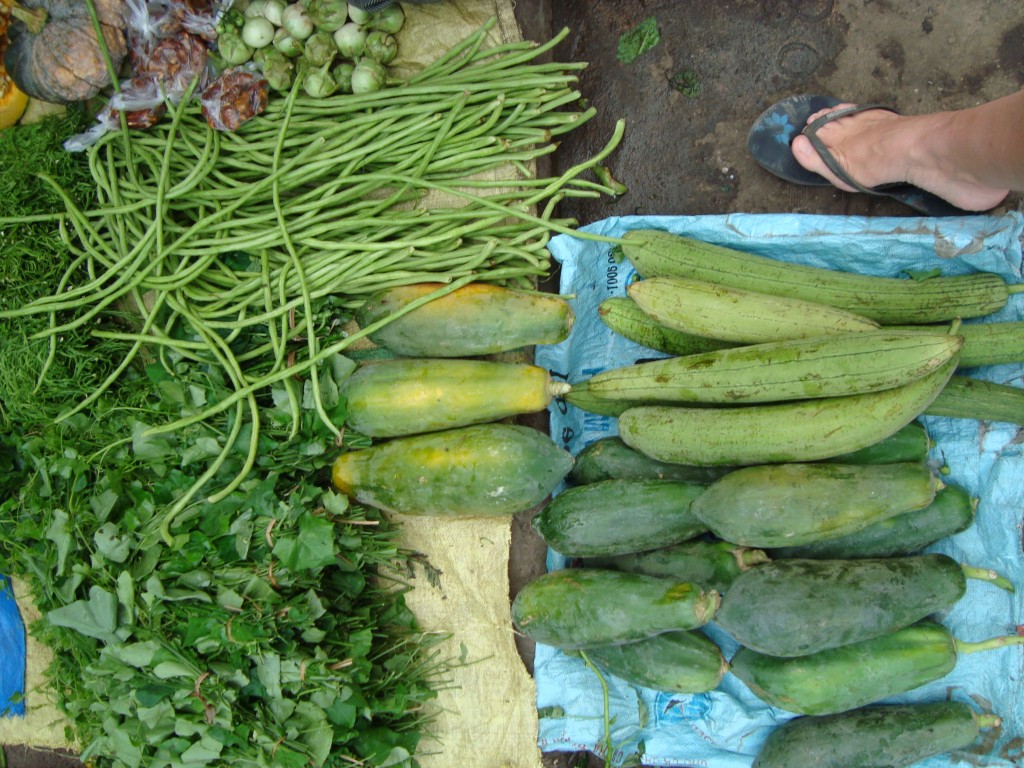 Look at the size of those beans and zucchini! 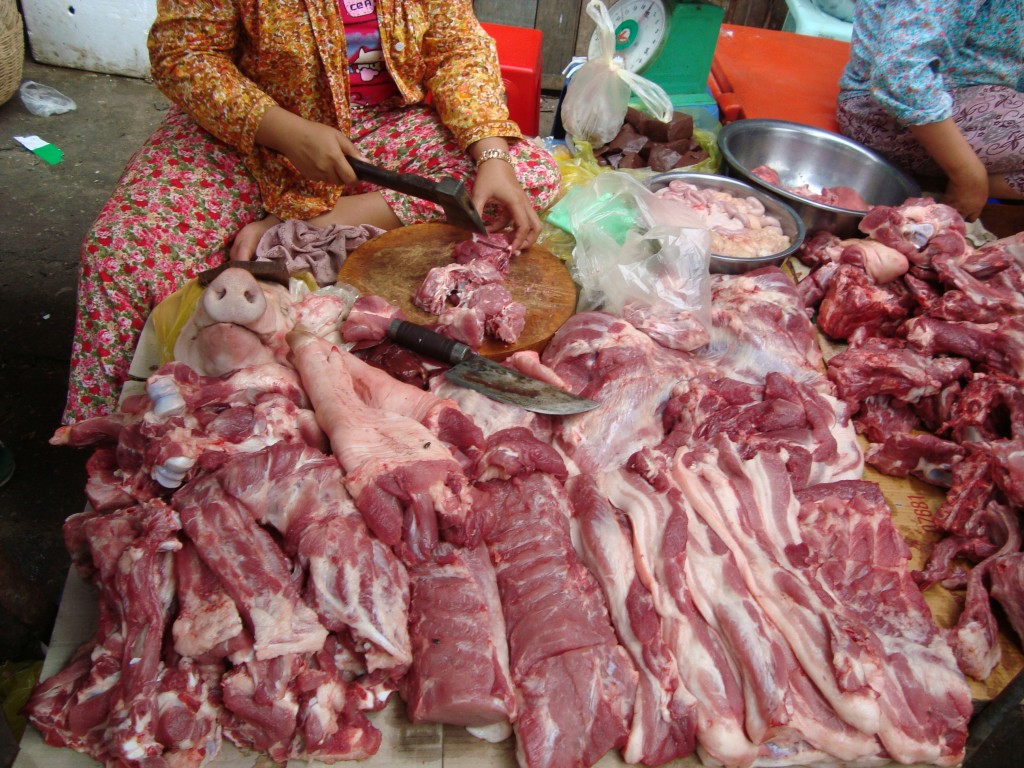 This made me a bit squeamish. 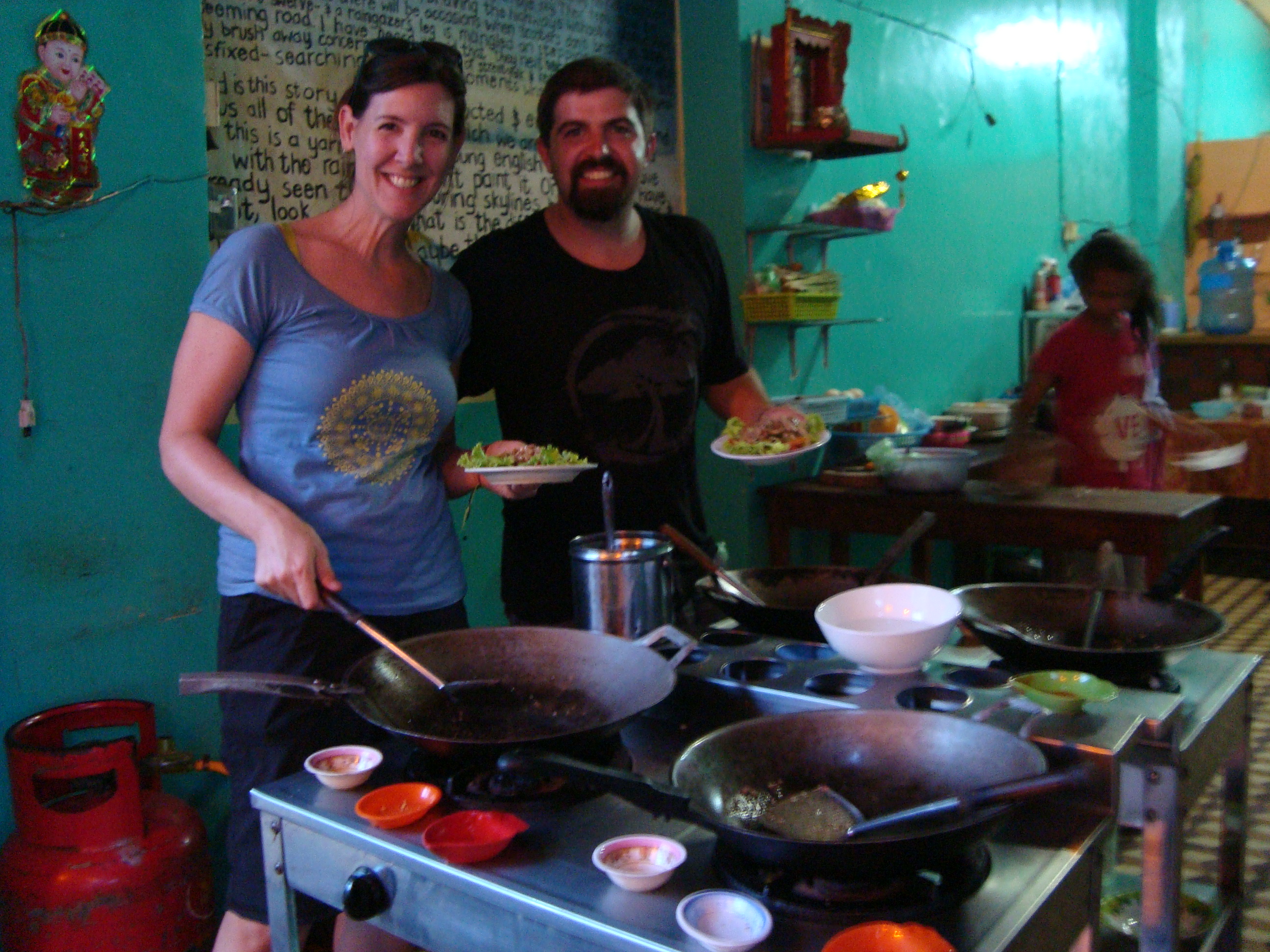 And, with our finished products straight from the woks. 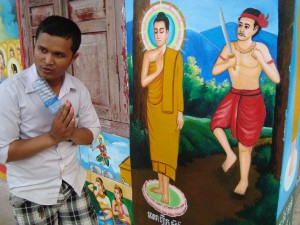 Our day trip to the temple was really fantastic and included a strenuous hike up to and around the temples at Phnom Sampeu, which are on a limestone mountain with amazing views. The Killing Caves are also at this site. I think the best part about this whole day trip was that we hired a tuk tuk driver to take us from our hotel and back (about 30 minutes each way) and we had no idea that he was also going to hike with us through the entire complex and serve as a tour guide. The paltry amount he charged us (with no haggling from us) was so little that we actually felt bad, but I think this was indicative of the low demand in a not-so-touristy and poor town. He seemed really excited to have our business and hang out with us for the day and we really enjoyed his company. 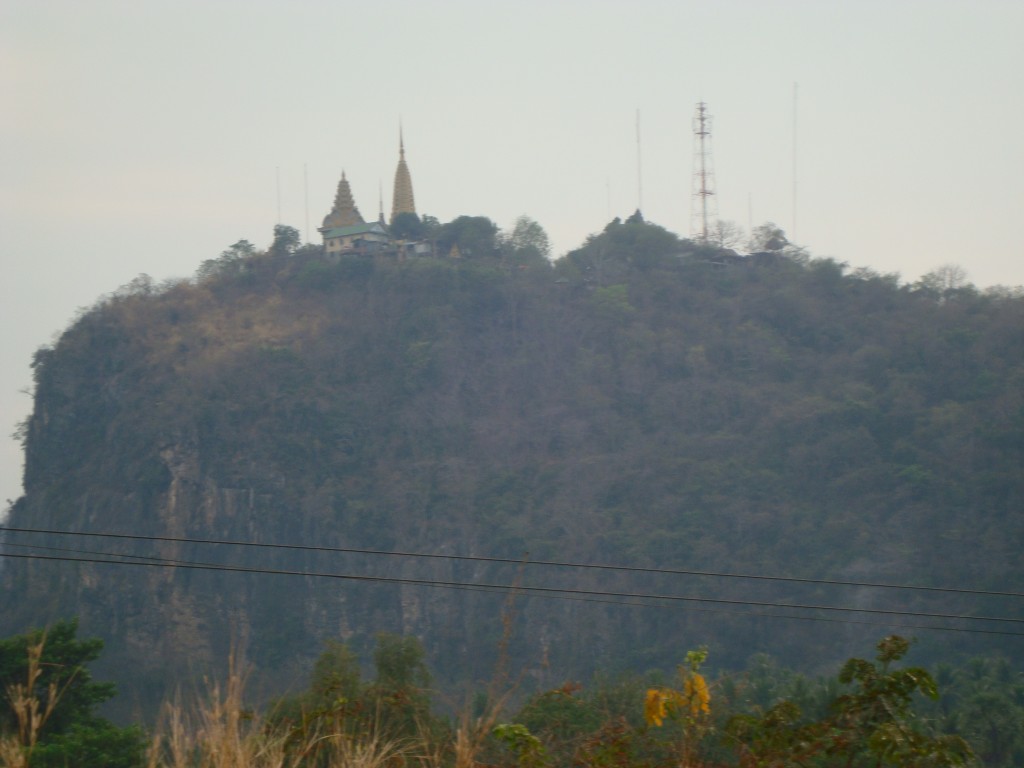 Looking up to Phnom Sampeau from the ground. 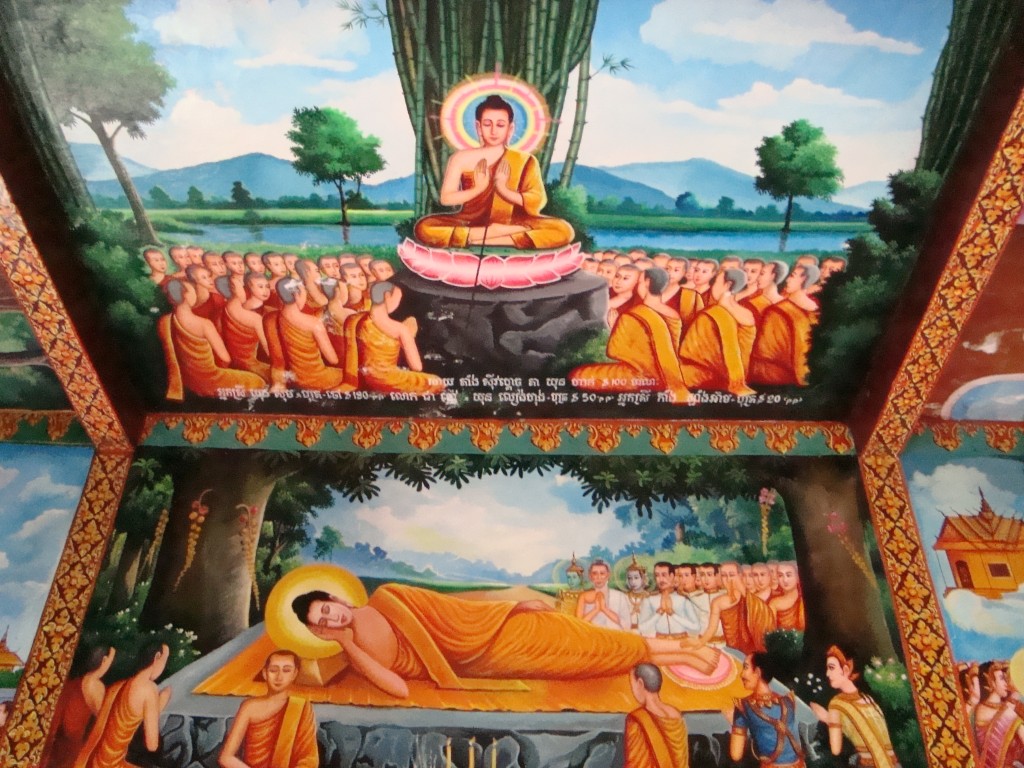 A ceiling and wall mural near Phnom Sampeau 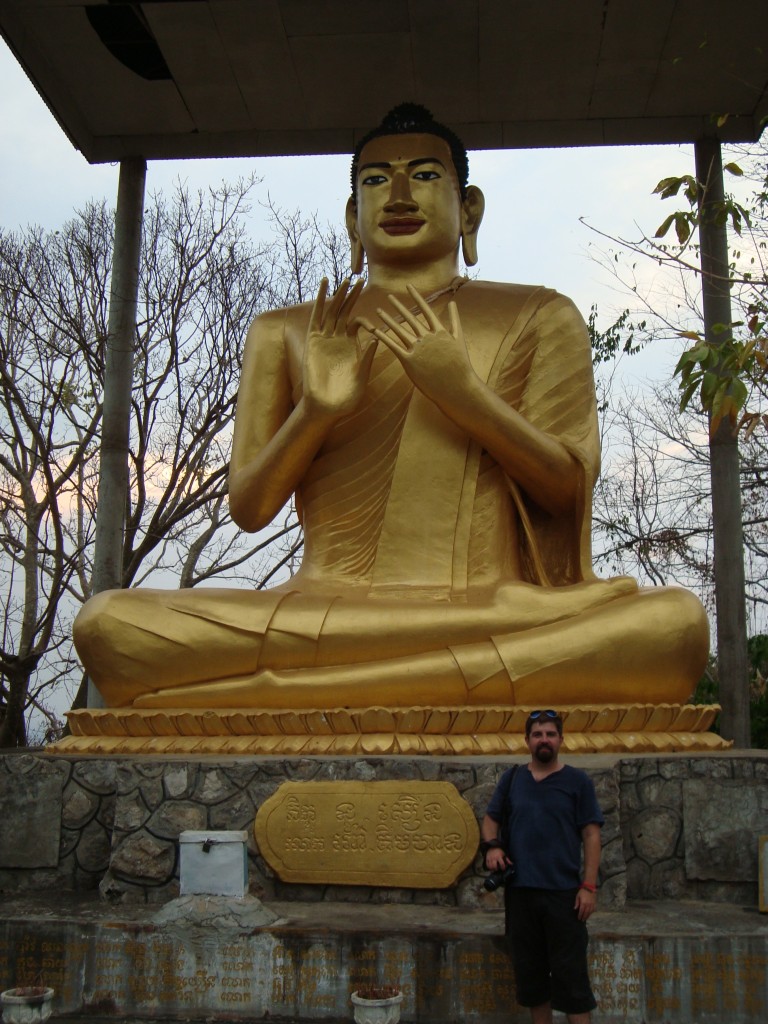 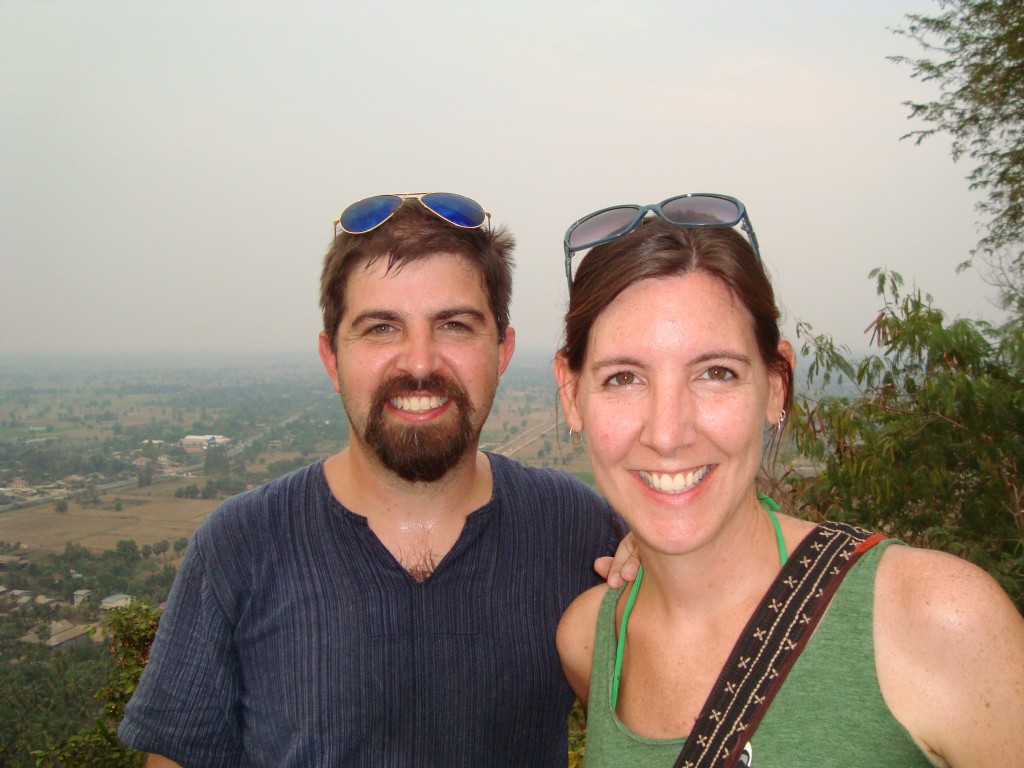 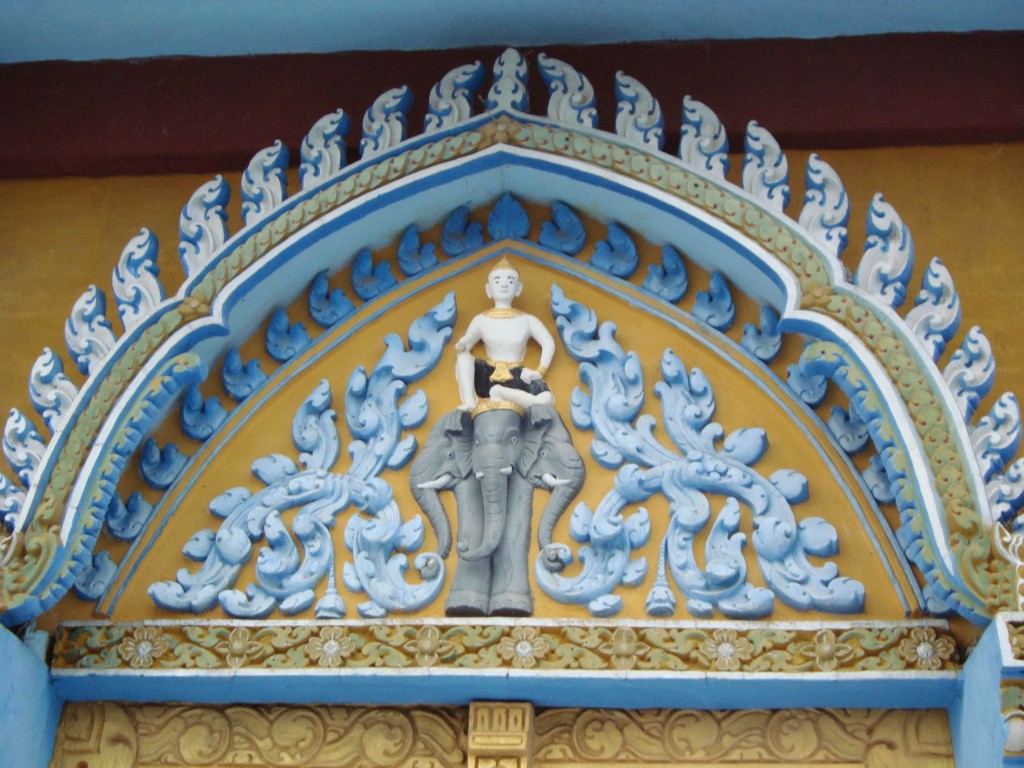 Close up detail on one of the temples 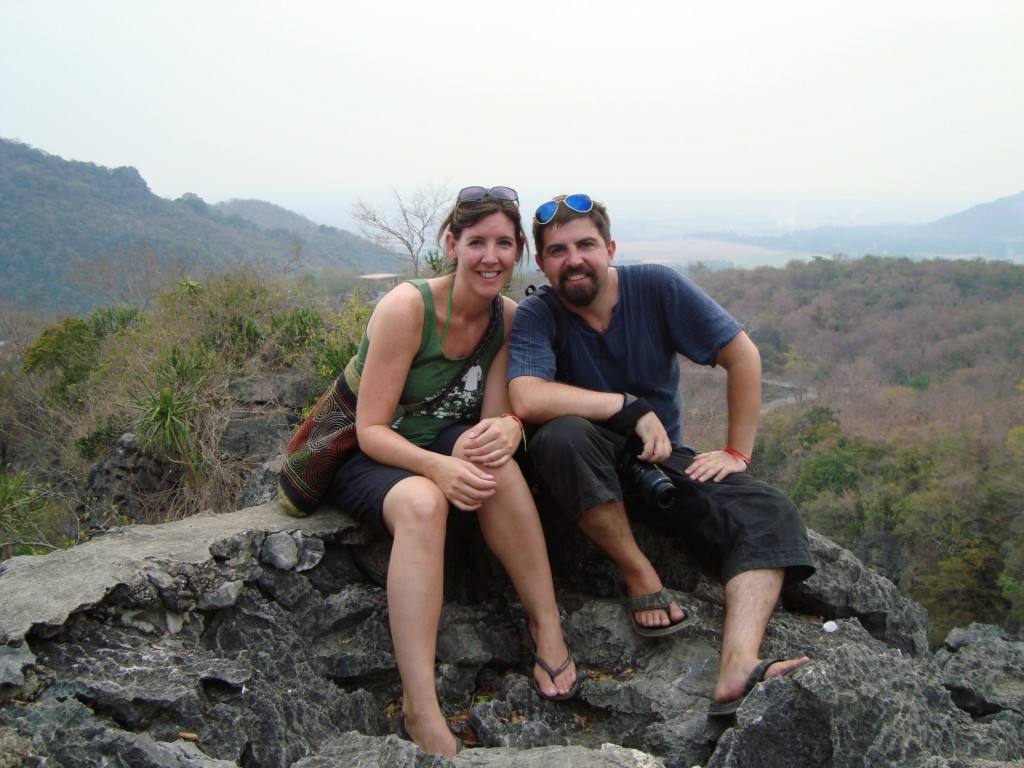 Resting at the top and taking in the view. 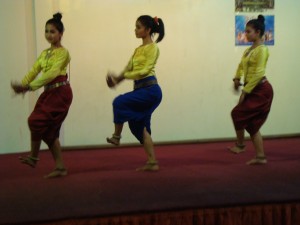 Traditional Cambodian dancers. I took this in Siem Reap, near Angkor Wat, but I forgot to put it in that blog post.

One last hidden treasure during our time in Battambang turned out to be the very loud nightclub by our hotel. It was apparently a popular spot every night with the locals, and this could’ve been much worse for us, but the music was fantastic from our balcony! It seemed to be a local band playing what sounded like traditional music, which we had also heard at Angkor Wat and reminded us of Bluegrass and Celtic music. 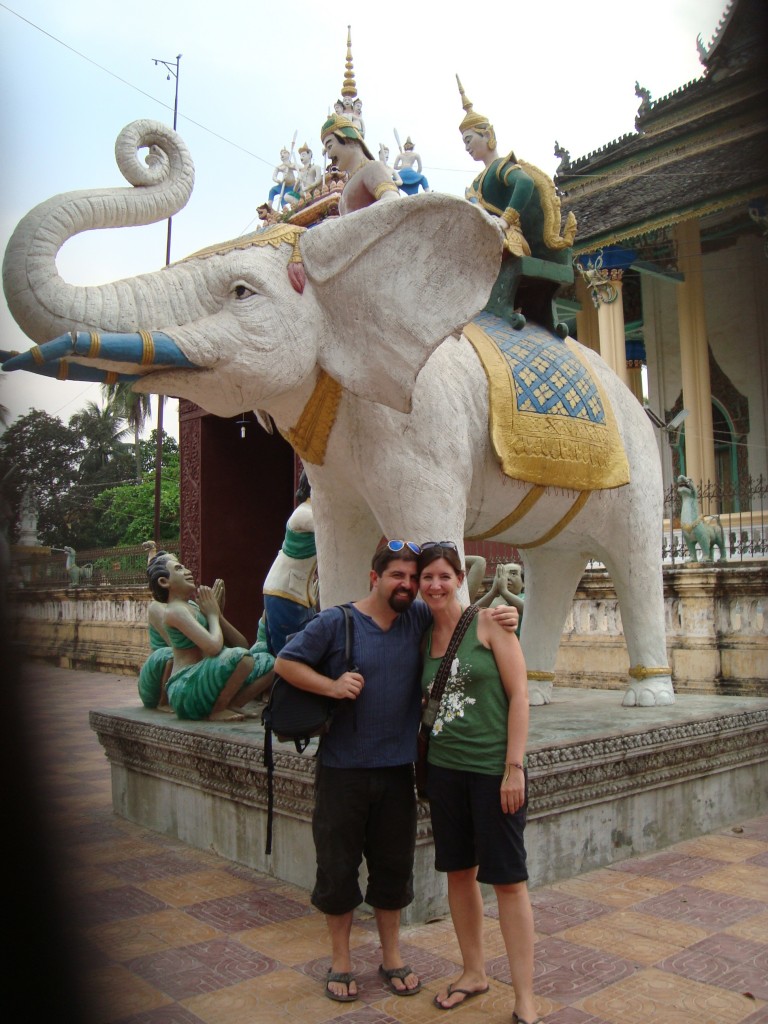 Our guide insisted on taking our photo in front of this white elephant, though we didn’t really learn the significance. 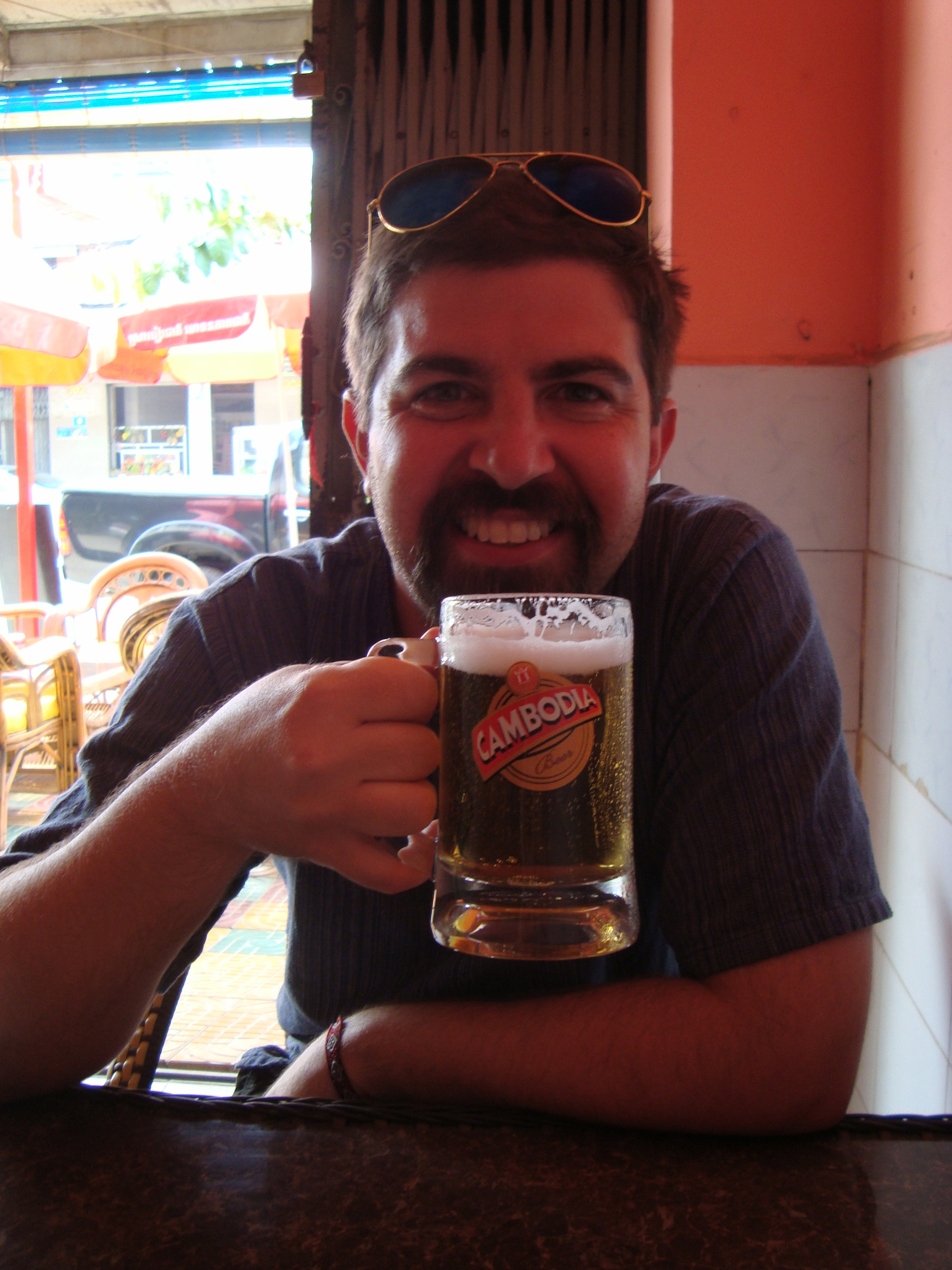 Enjoying a beer at a local joint. I think this photo captures the feeling of our time in Battambang.