After riding the bamboo train in Battambang we had a pretty open agenda for the rest of our time in Cambodia, as well as for the remainder of our trip. We heard great things about the Cambodian beaches, so we knew we wanted to check them out. From Battambang in the northwest, we had to take a 14 hour, two bus journey to Sihanoukville, on the southwestern coast. Once there, we took a short tuk tuk ride past all of the popular and crowded beaches (which are also reputed to be pretty seedy) to the edge of development at Otres beach. We stayed at a place called Mushroom Point, and lucked out on our second night by getting their best hut, right on the ocean. They didn’t take reservations or require you to tell them when you were leaving, so once we got this hut, we could play it by ear. One night turned into two weeks pretty quickly. If not for our 30 day visa limit in Cambodia and our goal to go back to the Western coast of Thailand before coming home, we may have stayed even longer. 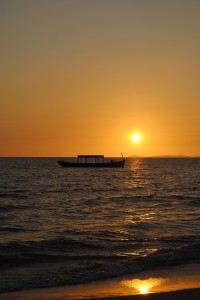 There isn’t all that much to do at Otres aside from laze on the beach. We got to slow down and really relax for the first time on our trip, and maybe for the first time in our lives. It was amazing to have two weeks in one place with very little to do. Our hut there was the most rustic room we had, with no furniture other than a foam mat on the floor for a bed and a small shelf for our things, so we didn’t even spend much time in there. There were shared bathrooms with a hose for a shower (that often only had a small drip of water coming out), but we quickly got used to it. While Otres didn’t look as pretty as some of the Thai beaches we visited, we found it to be the best water for swimming on our whole trip. We spent our days alternating between eating, drinking, swimming in the ocean, and reading in papasan chairs. 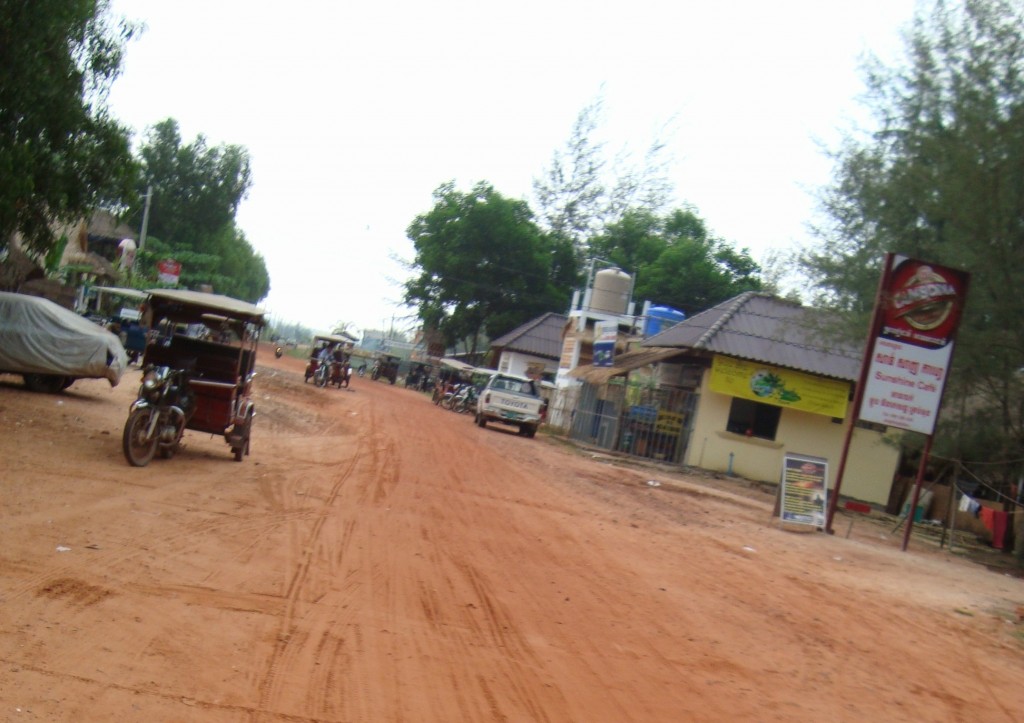 The road into Otres. Not a very developed place. There was talk about a French company coming in and developing a large portion of the beach, but for now their land is empty and the 20 or so other ‘hotels’ are small operations with several huts or bungalows. It had a very island feel for being so close to a major town. 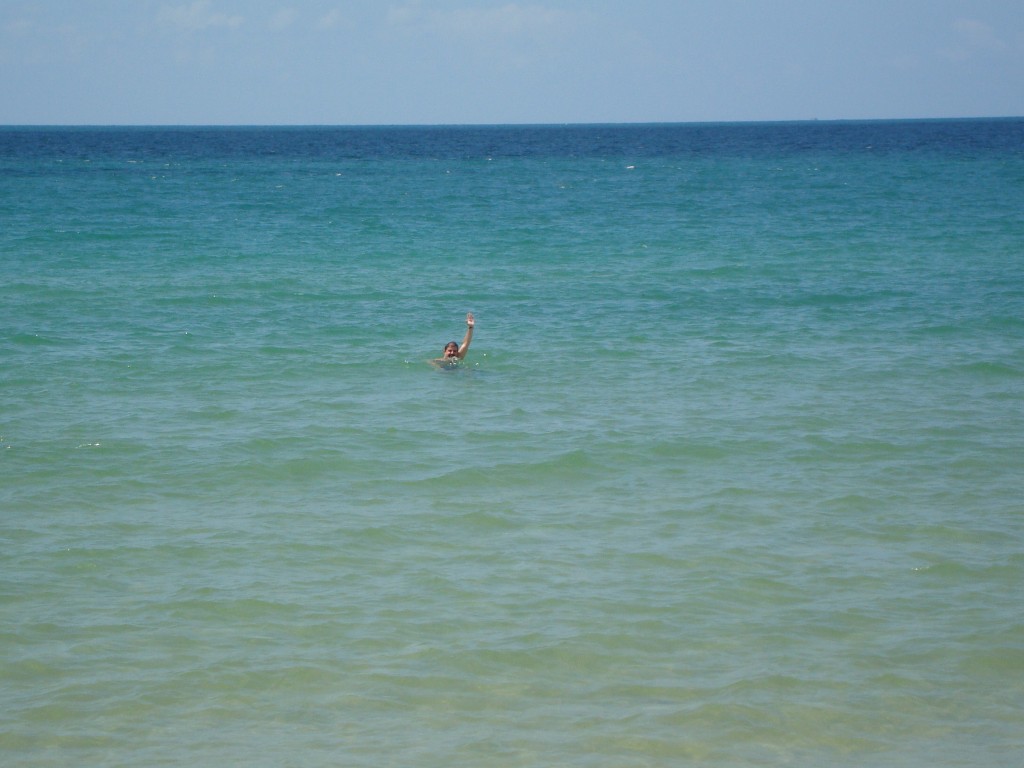 John waves from the ocean. 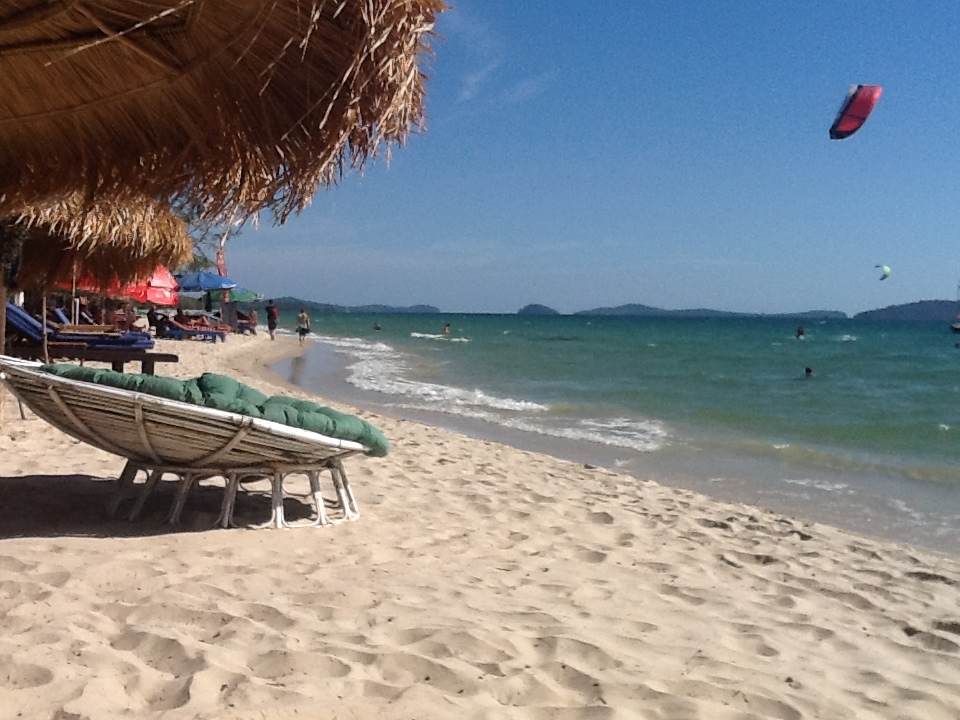 View down the beach; lots of people kite surfed. In the background there are various islands. We intended to visit them but we were so content at Otres that we never made it out to the islands.

Our beachfront hut at “Mushroom Point” 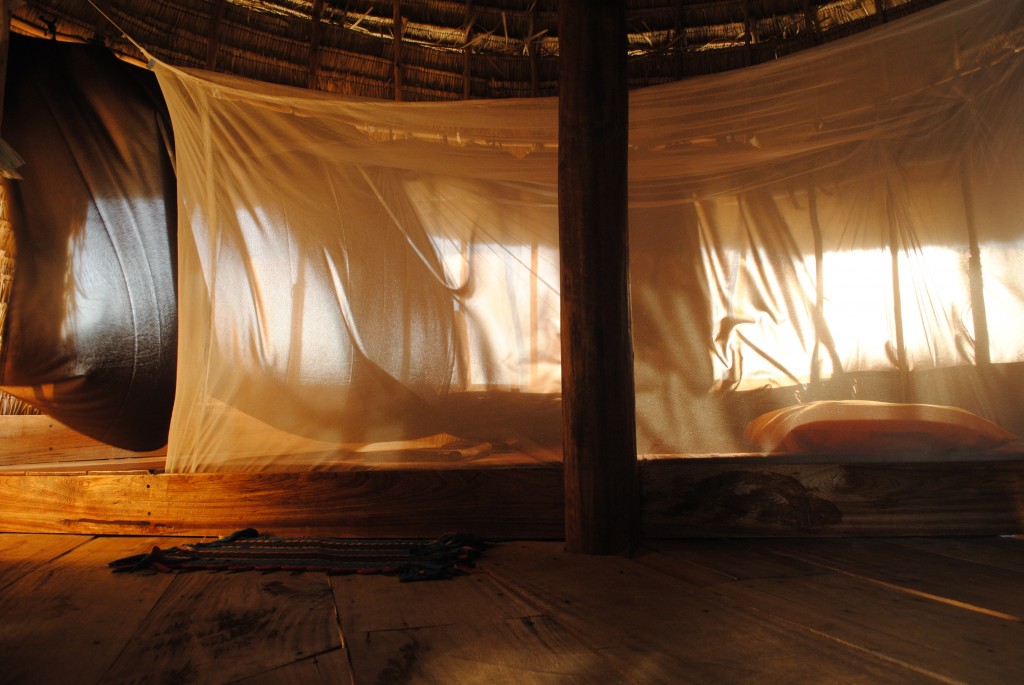 There was a slack line at the edge of Mushroom Point and a lot of folks spent time trying to walk across without falling. John was much better at it than I was, especially after I fell early on and got scared of breaking a limb. 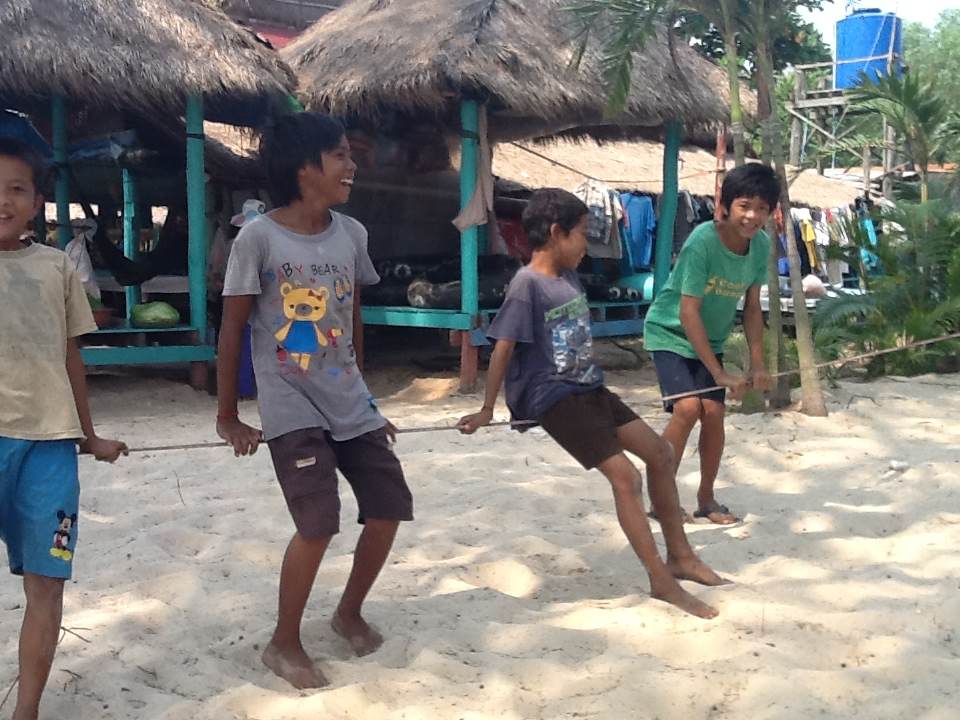 The gathering point for all the local folks selling stuff on the beach was next to Mushroom Point so these boys were often playing on the slack line. 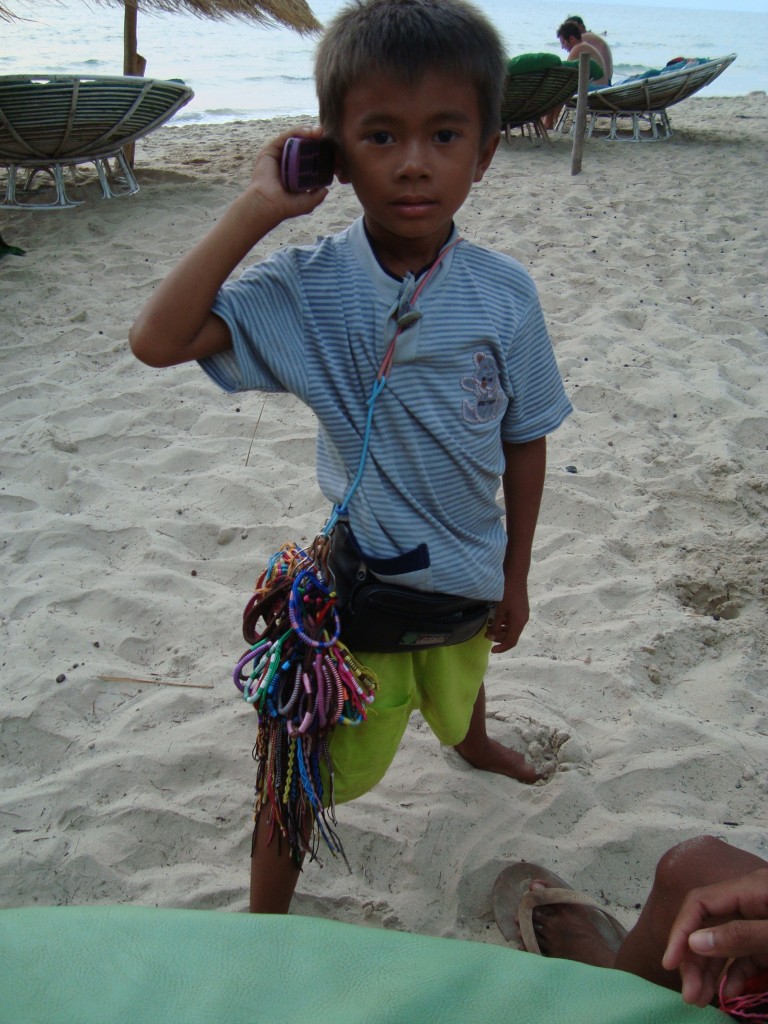 A little 4 or 5 yr old kid we got to know on Otres. He was always selling bracelets on the beach and he really knew his way around an iPad, as I discovered one day when he commandeered John’s while I was reading on it. He hopped up into my papasan chair and played Angry Birds for 20 minutes in my lap. Sometimes, he’d come up to us just to chat and then he would have to step away and take a phone call! It was the cutest and most hilarious thing. We figured it was his mom calling to check in. 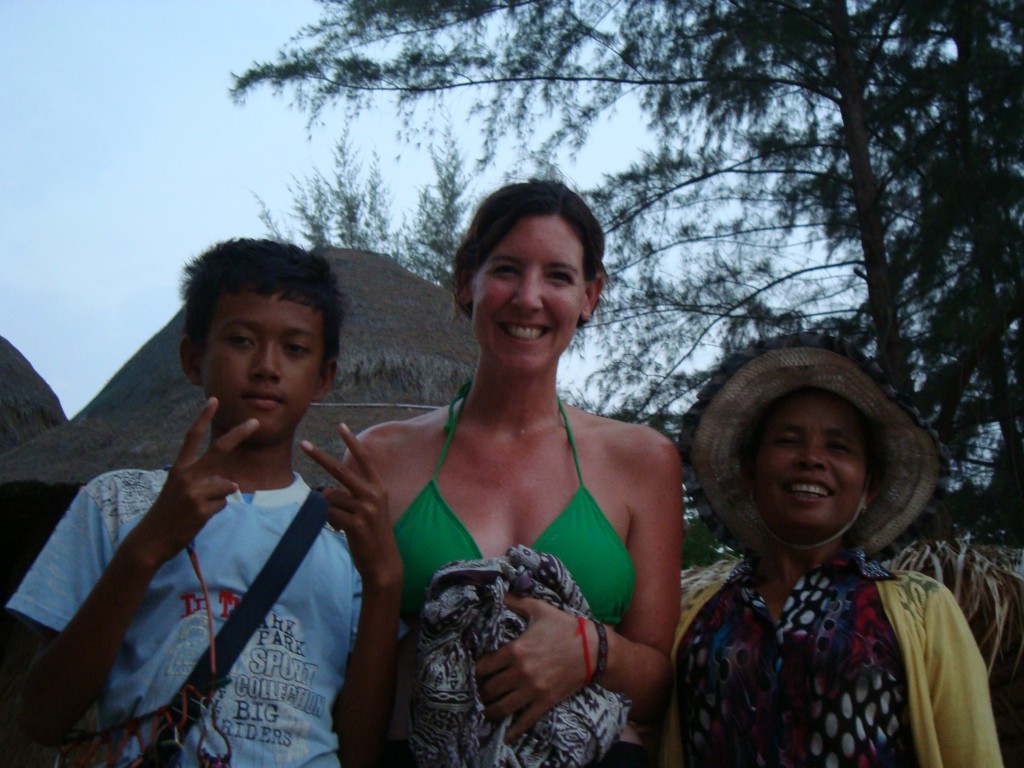 This little boy is the brother of the boy on the phone, and Coca is the woman on the right. She gave the best massages I had in all of SE Asia, and during our two weeks at Otres I set up a routine where she met me every other day at sunset for a one hour massage (for $6). 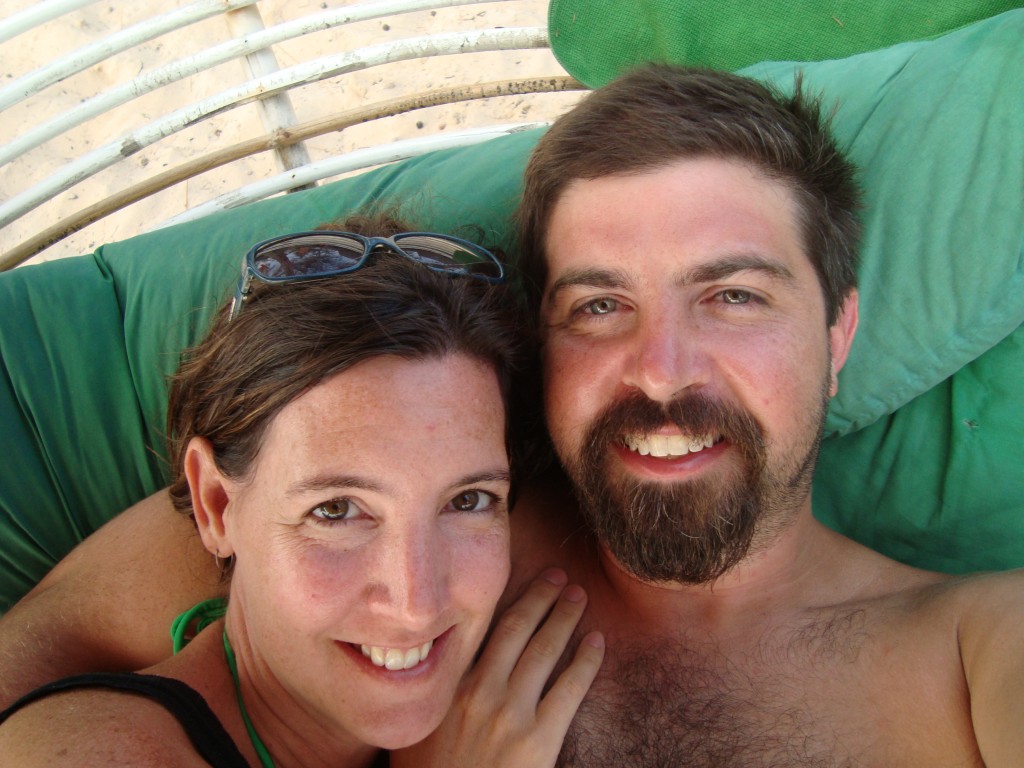 At the end of our two weeks on Otres, feeling pretty relaxed in one of our favorite papasan chairs.