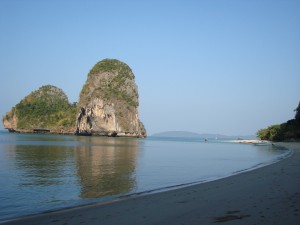 After our amazing two weeks at Otres Beach, Cambodia, we were almost reluctant to have to go back on the road again. But with two short flights and one bus ride of about the same length, we made it all the way to the southwestern coast of Thailand in one day. And here we began our final 6 weeks of beach hopping in Thailand. 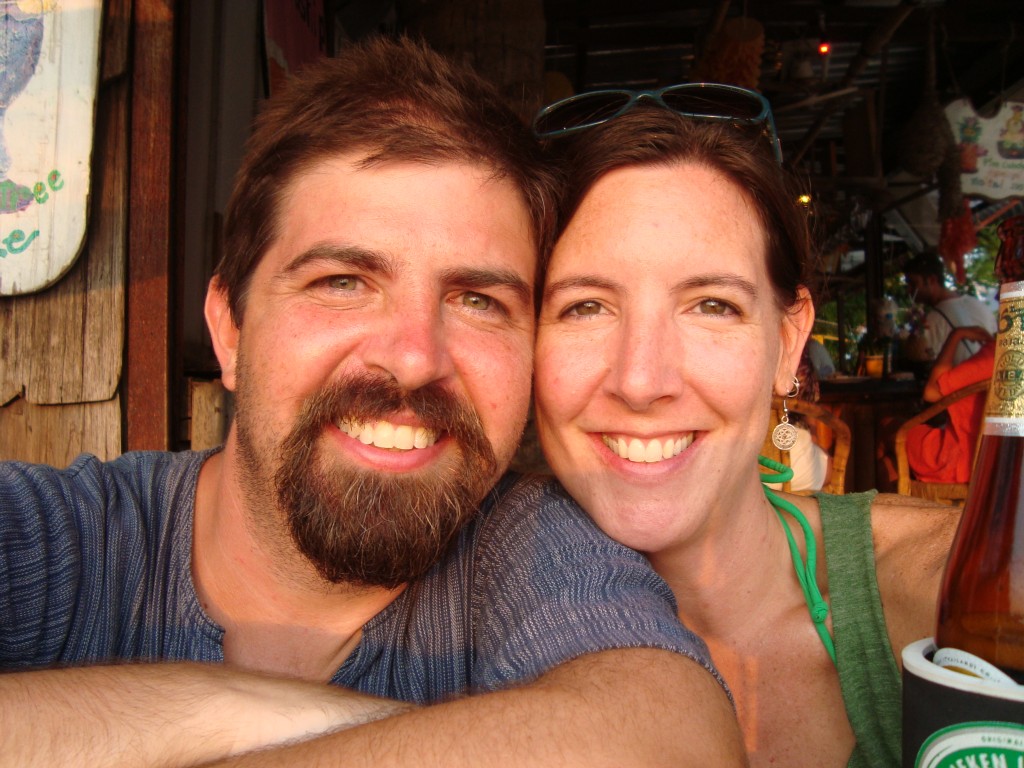 Enjoying a sunset on Railay Beach

We spent one night on a beach called Ao Nang, which we really didn’t like that much. Next we took a boat over to a place called Railay, which is basically a peninsula cut off from the mainland by large limestone karsts. It isn’t an island, but you can only get in and out by boat. We’d heard about Railay from several friends who’d been. The thing to do there is rock climbing, so I was keen to go climbing and do a little hiking. You needn’t be a climber to enjoy Railay (or its neighbor Tonsai), as they are breathtakingly beautiful and worth the trip to get there. 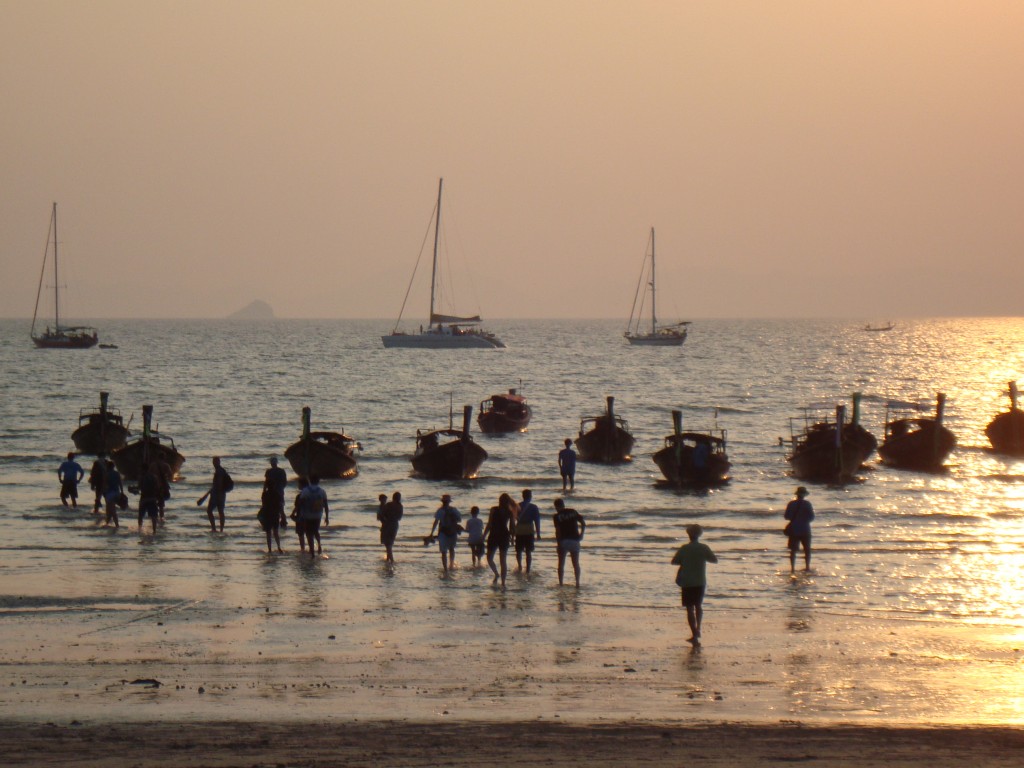 Railay Beach. This is where you come in and out, and you have to carry all luggage through the water to longtail boats that take you around to the mainland. 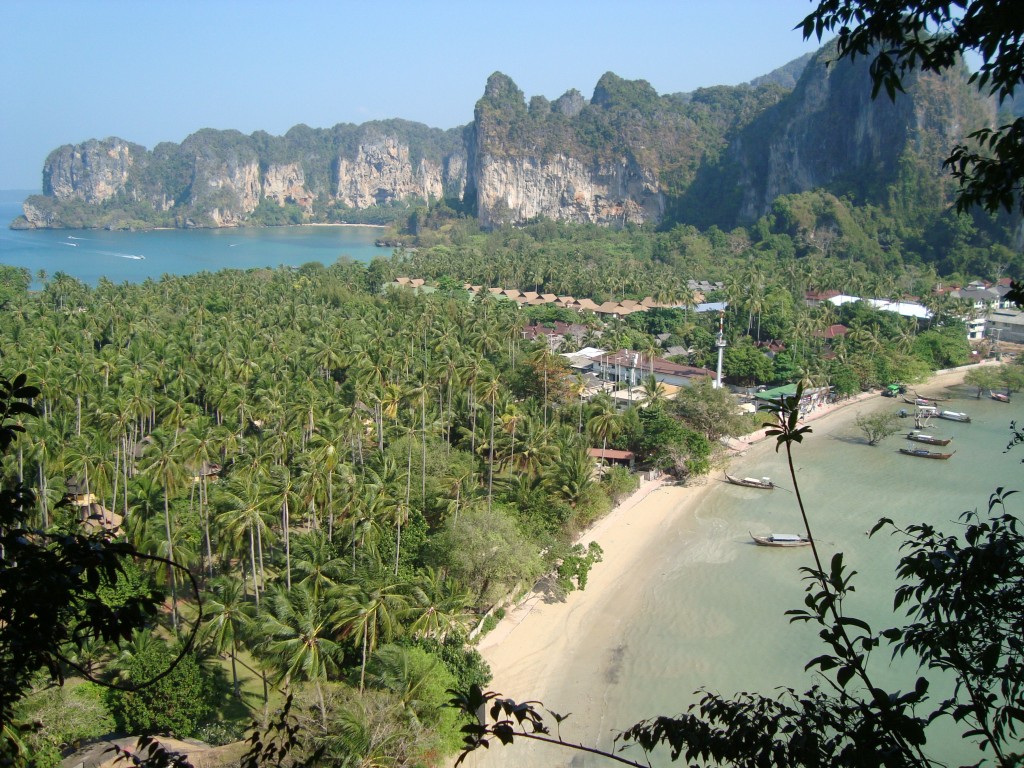 View from the top Phra Nang Beach hike, where you can see both Railey East and West beaches and the karsts in the background that block the area from the mainland. Even though we did this hike early in the morning to try to avoid the heat, it was extremely intense and sweaty. For much of the hike, there were ropes that you had to use to haul yourself up the rocks. It was one of the most fun hikes either of us has ever done.

At this point on our trip, it was mid-March and the temperature was getting hot. One of our main goals each day was drinking enough water and swimming after any physical activity. The weather was really starting to slow us down. Luckily, we were at the beach so the pace was slow and swimming was easy to find. 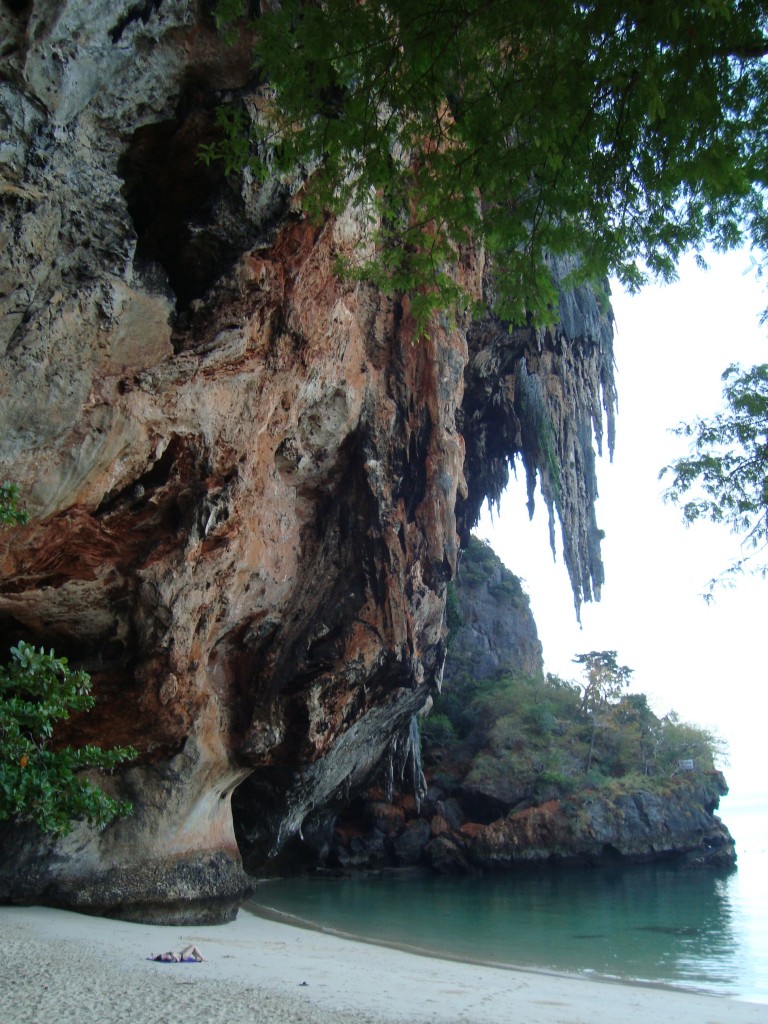 Phra Nang beach on Railay. We happened upon this almost-too-good-to-be-true beach after the very intense hike to the viewpoint. We jumped right in for a swim. 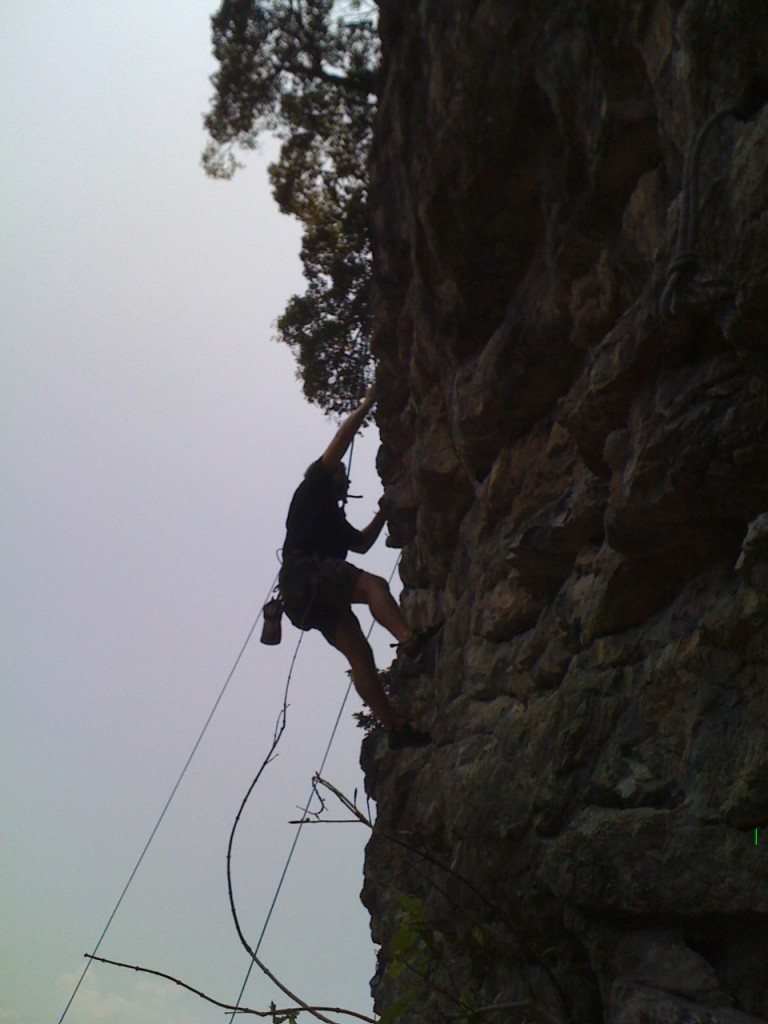 We took an “intro to rock climbing” class on Railay, since this was John’s first time climbing outside. We found the routes to be simultaneously challenging and exhilarating. We had a great time and were rewarded with amazing views of the ocean from the top of the highest climb. 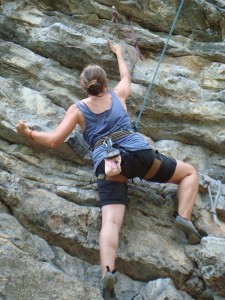 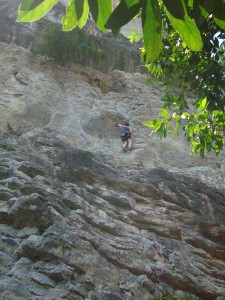 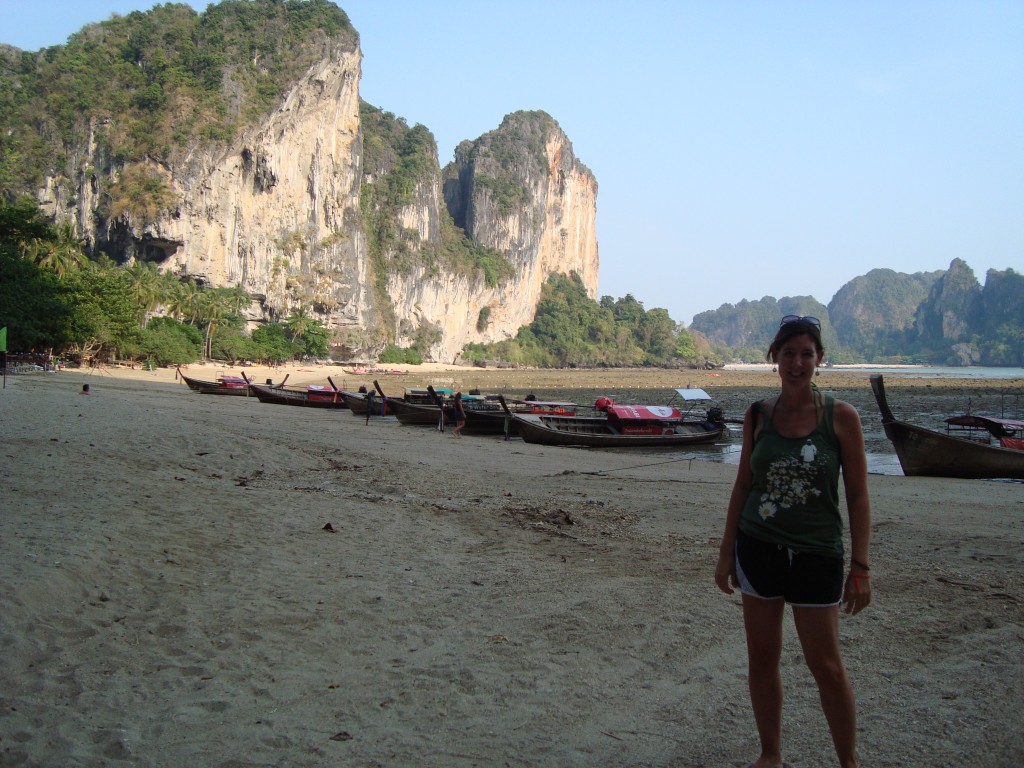 Tonsai Beach, next door to Railay, is where the more ‘hardcore’ climbers now go to escape the tourists on Railay. We just did some hiking and exploring around the gigantic rock formations coming up out of the beach. Once high tide came in you couldn’t walk between Tonsai and Railay on the beach; we just made it back before the path became submerged under water. 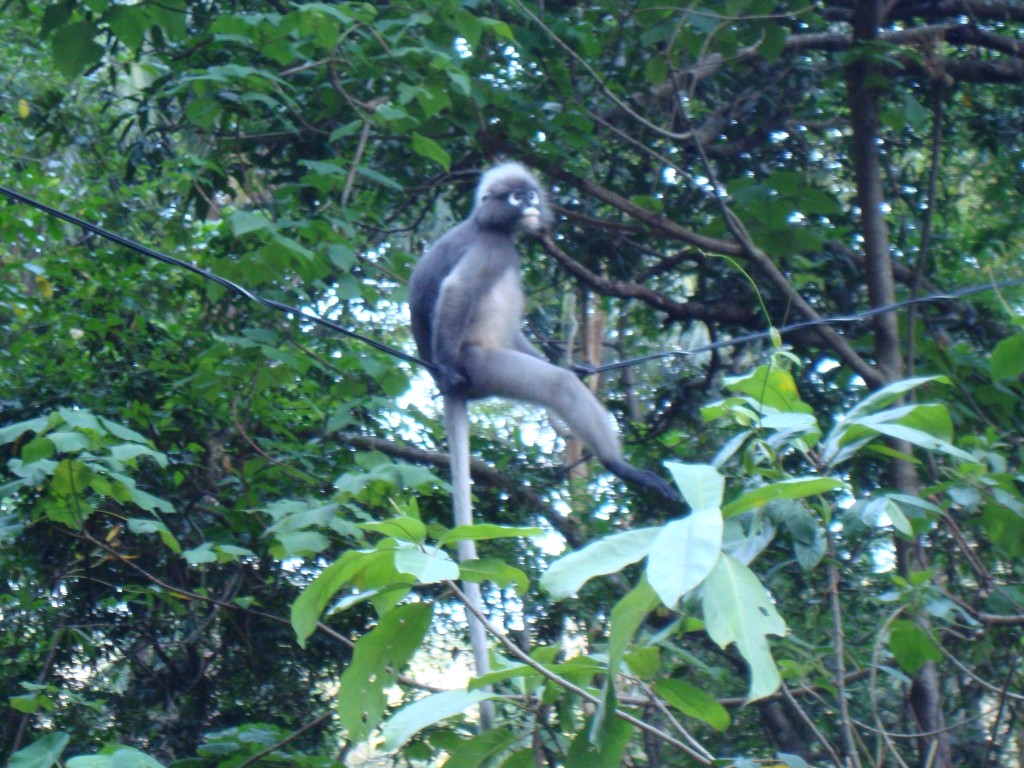 Monkey on a wire in Tonsai. 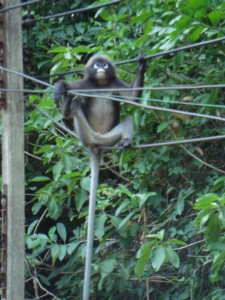 Another fun monkey pic on Tonsai.

On the ferry to Ko Lanta.

After leaving Railay, we headed even further south to an island called Ko Lanta. We weren’t sure how long we’d stay here but before we knew it we’d been there seven days.

All in all, we loved our week on Ko Lanta. I did pick up a mild case of dysentery there, but we weren’t moving around so it wasn’t as bad as it could’ve been. And really, the heat was far worse in my memory — Lanta was the southern most point that we’d been on our trip and at the end of March it was getting HOT. Most afternoons, the beach and the pool at our resort were too hot to swim in (I know, it was tough). Plus, the price of our rustic bungalow on Ko Lanta (and around much of the western coast) was almost double the prices we were finding back on Ko Pha Ngan (in the Gulf of Thailand, where we went our second week). So we decided to head up to see the famous Ko Phi Phi islands while we were nearby (more on that in the next post), and then make our way back to the Gulf for our final few weeks. 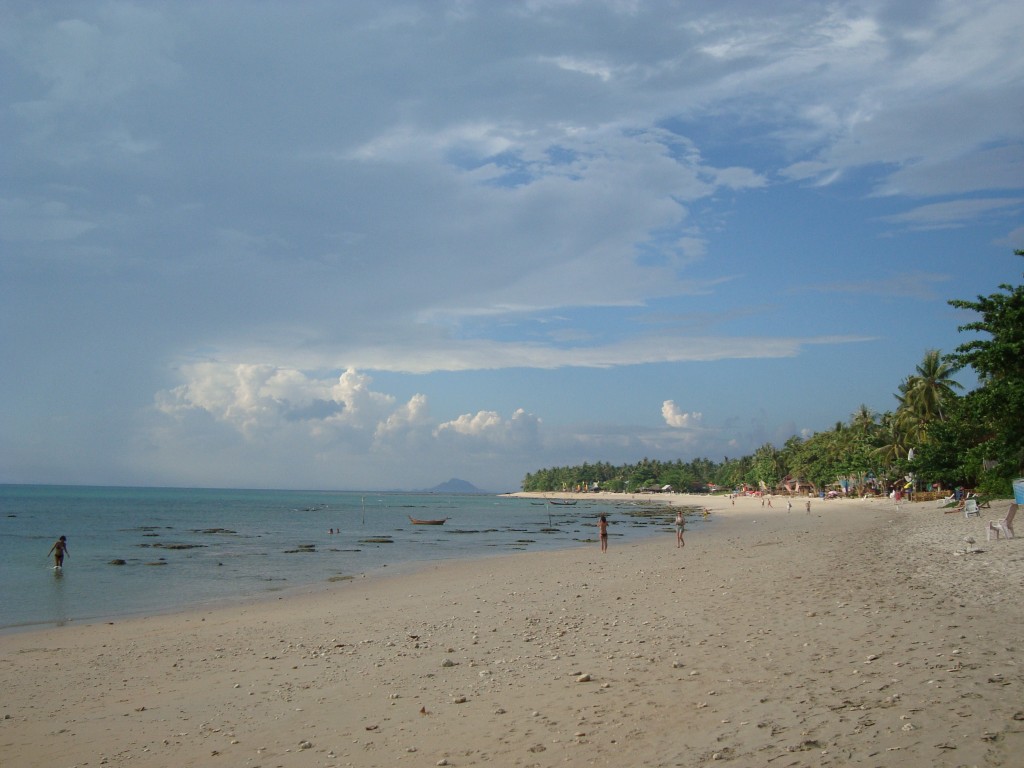 View down the beach on Ko Lanta 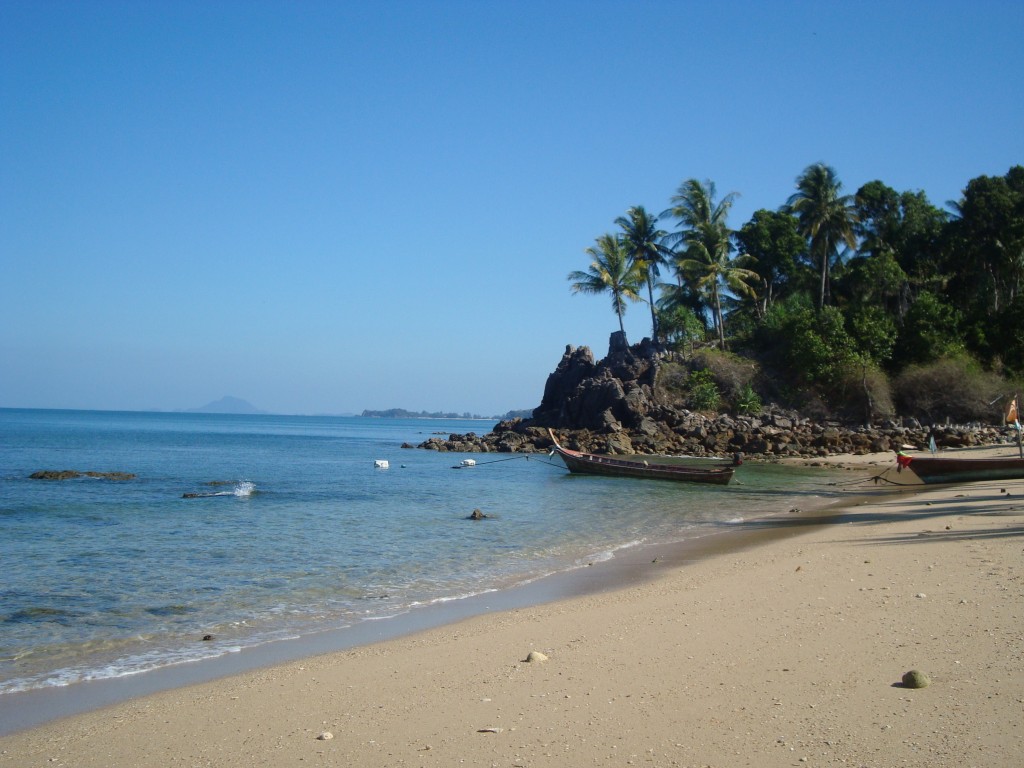 Another shot of Ko Lanta 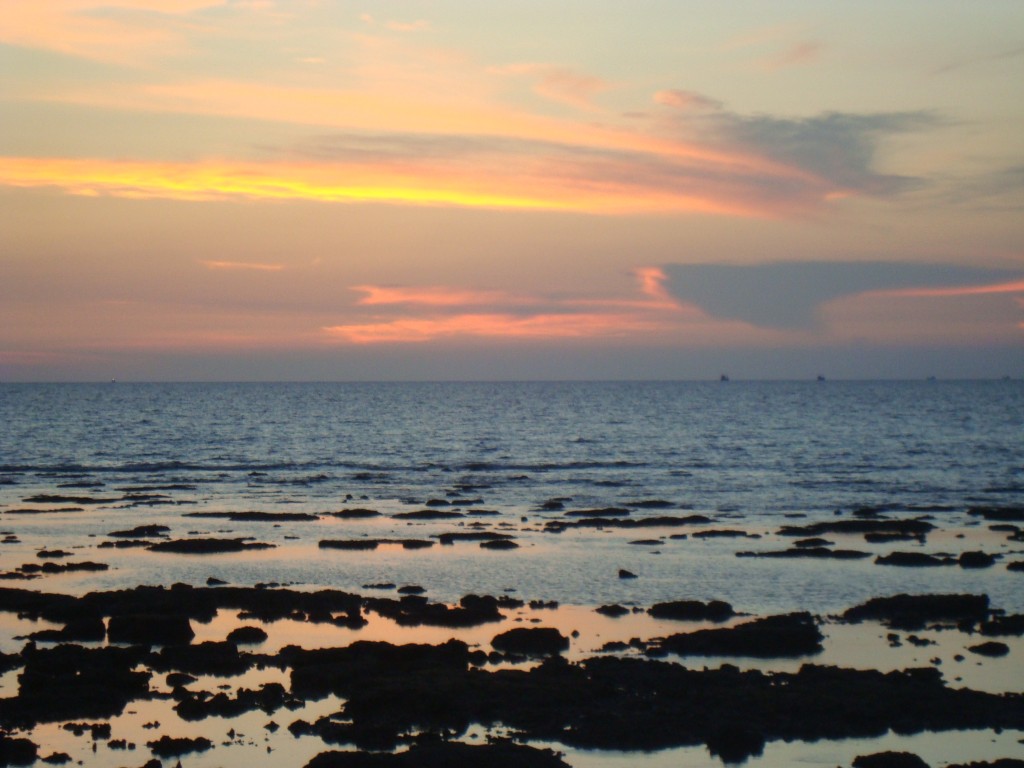 Sunset on Ko Lanta. The beach was rocky after the tide went out, so swimming was best during high tide. 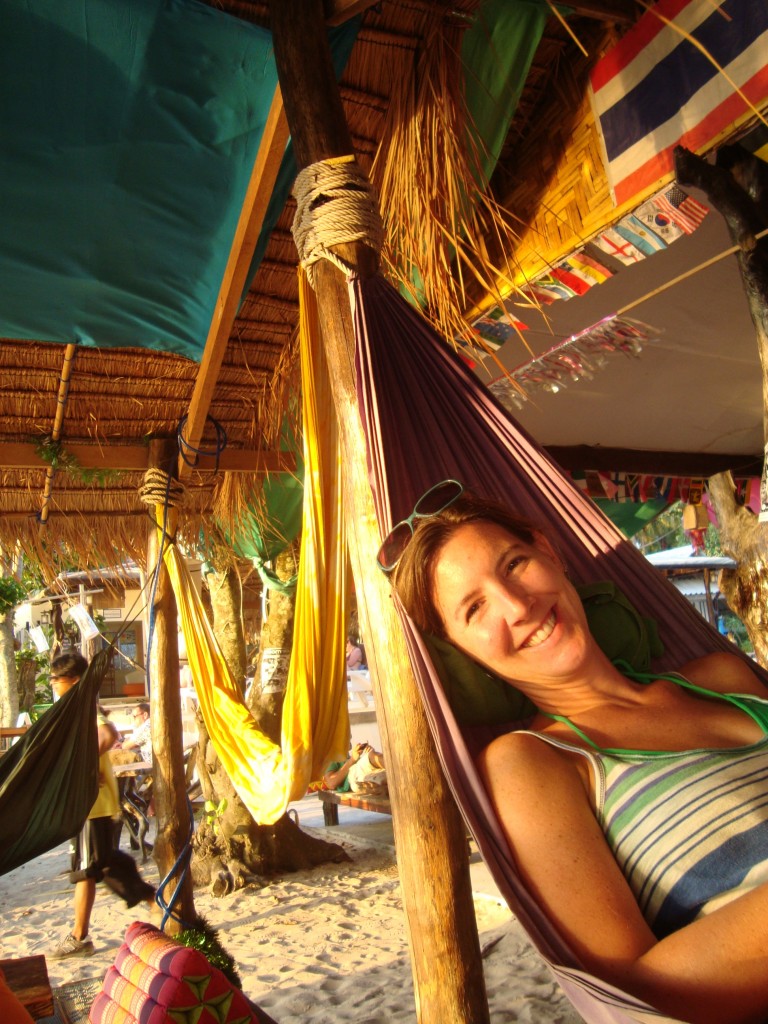 On Ko Lanta, we spent a lot of time in the bar that was connected to our bungalow/resort. John and I hope to have a structure like this with mats and hammocks in our backyard one day. 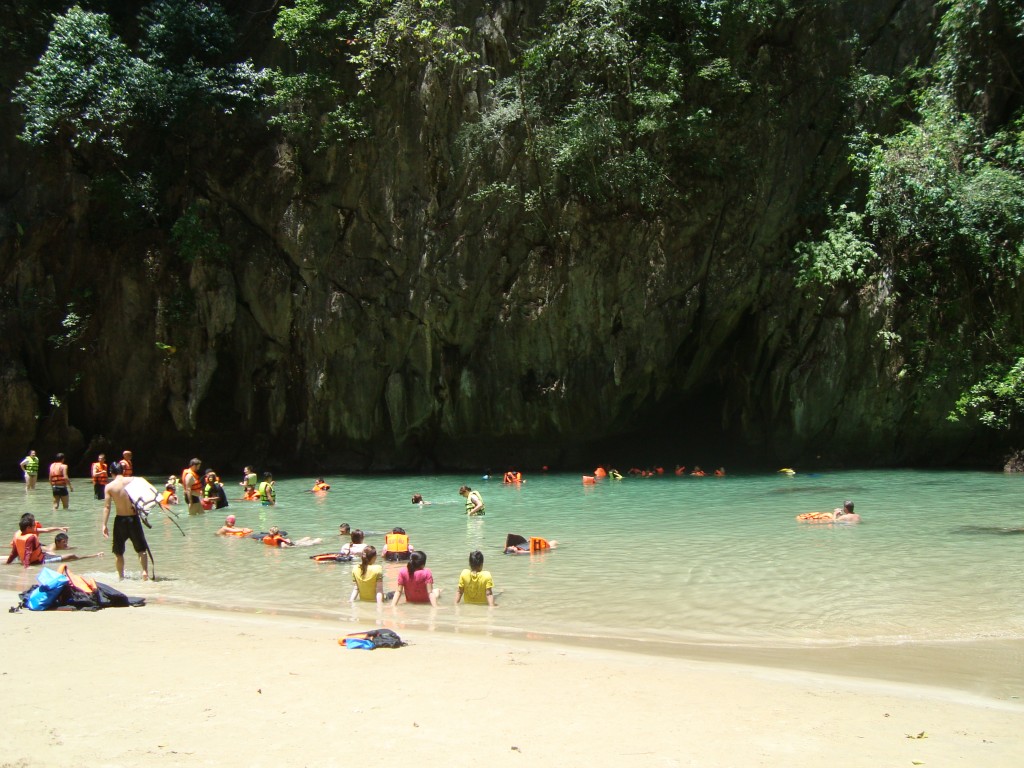 From Ko Lanta, we did a ‘four islands’ day tour that included swimming through a pitch black cave (Emerald Cave) following a guide holding a flashlight to the center of an island where you swim out into a stunning beach w/ green water. The opening of the cave is in the center of the photo where there is a group of people in life jackets coming out. John is hanging out in the water on the right. 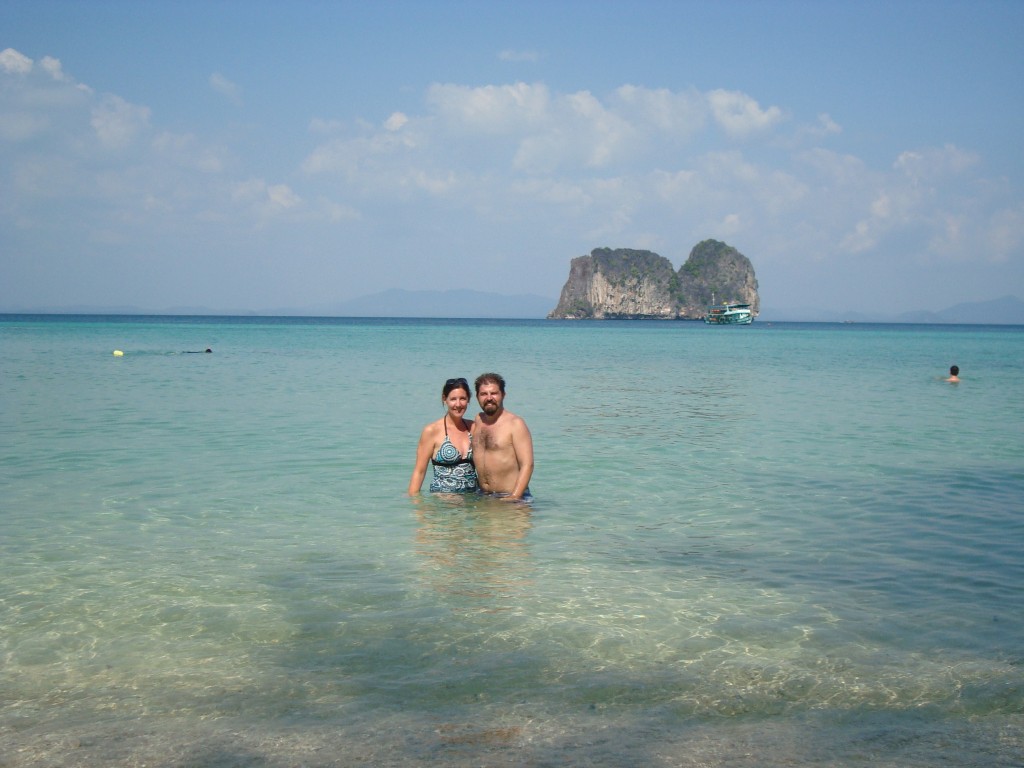 Swimming on scenic Ko Ngai during the four islands tour.

Although we saw one amazingly beautiful island after another, the best part of the four islands tour was spending the day with this really fun couple from Serbia. We will look them up if we’re ever in Belgrade.