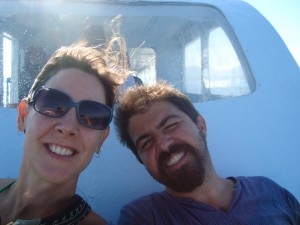 On the small ferry to Ko Phi Phi. It was either sit on the hull and get windblown and wet, or endure the thick diesel smell below …

We had a lot of mixed feelings about going to the touristy Ko Phi Phi islands, which are reputed to be party central. However, they are supposed to be among the most beautiful islands in the world and we wanted to have a glimpse while we were so close. The main island (Ko Phi Phi Don) is so popular that hotel prices are quite high, so we decided to take a chance on an overnight boat trip to the nearby Ko Phi Phi Leh, (a national park where The Beach was filmed). There are no hotels on this island so it is full of day trippers between sunrise and sunset. The ‘Sleep Aboard‘ trip is the only authorized group that can be on Maya Beach after sunset, so you end up having the place to yourself (aside from a few park employees that camp inland from the beach). This meant that we would only have about 6 hours to spend on the main island of Ko Phi Phi Don before our boat left, but that turned out to be just right for us. 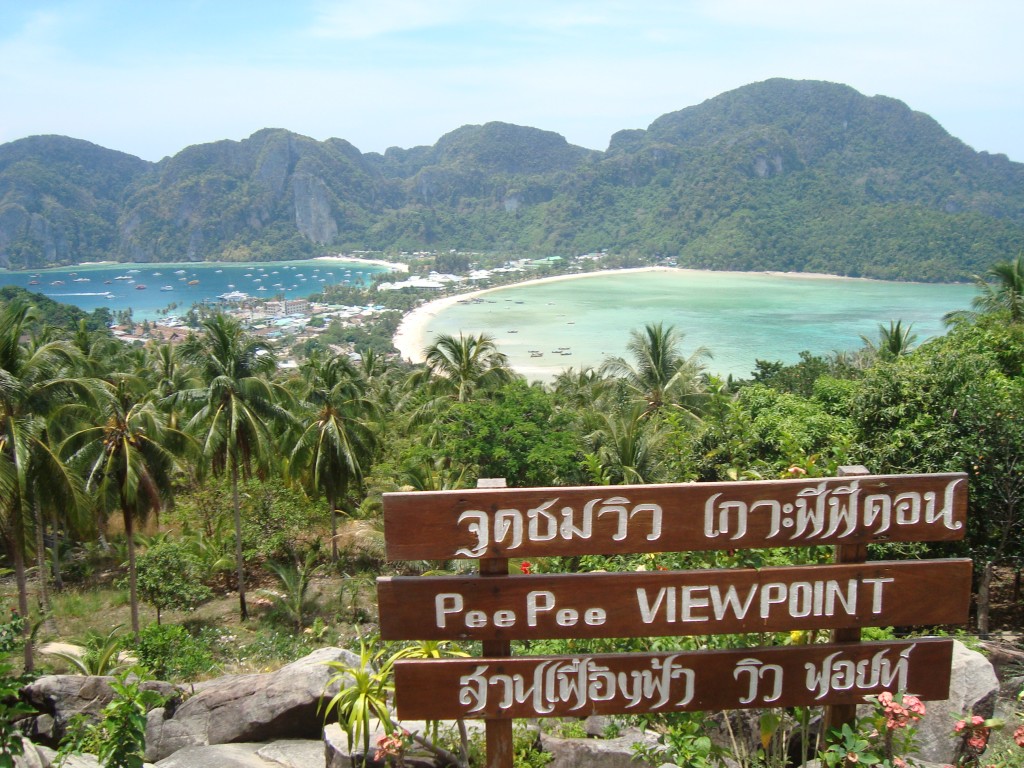 View of the strip of land connecting two beaches in the center of Phi Phi Don (yes, it is pronounced ‘pee pee’). The heat was sweltering and we were carrying full day packs around for the overnight boat trip. John and I had a difference of opinion over whether or not to take the 1/2 hour, uphill hike to the viewpoint in the noontime heat with our bags. We compromised and John had a beer (or two) and watched the bags while I did the hike. It was a tough hike in the heat, and I don’t think I would’ve made it to the top with my bag, so I was relieved that John didn’t want to do it in the end. It all worked out and the hike was well worth it for the views.

View from the Ko Phi Phi Don viewpoint over to Ko Phi Phi Leh (where The Beach was filmed, on the other side of the island). 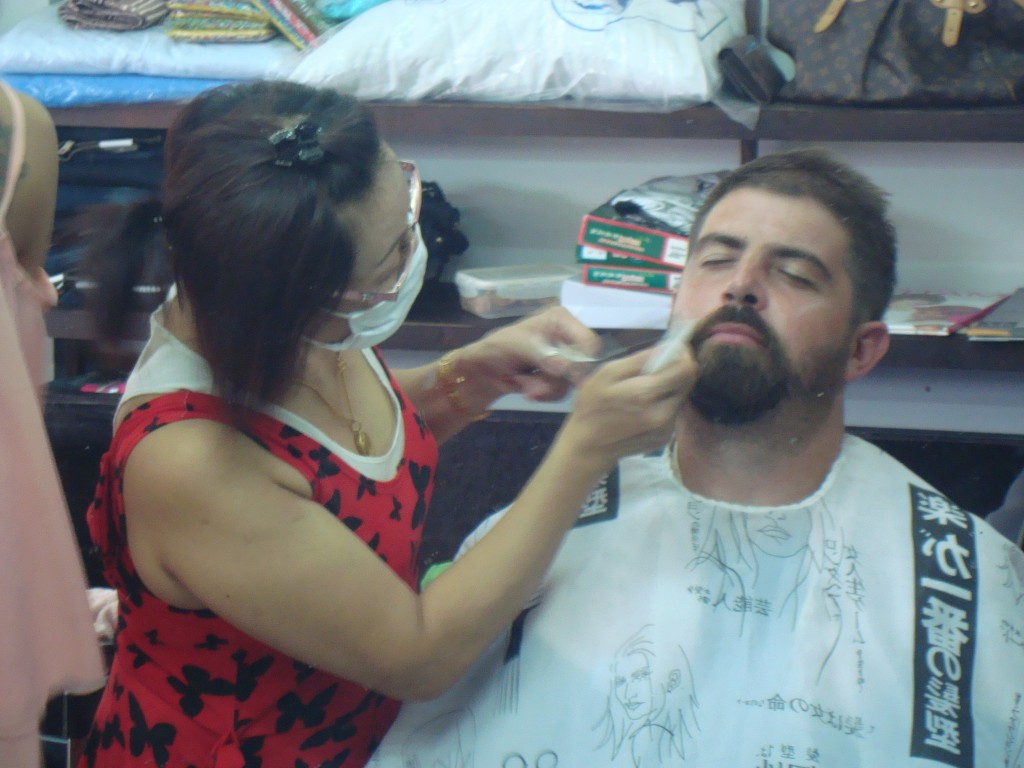 After I climbed to the Phi Phi viewpoint and John had a few beers, he decided to try his luck at a local barber for his second haircut on the trip. This stylist ended up giving him a great haircut and goatee trim, all with little-to-no communication between them. 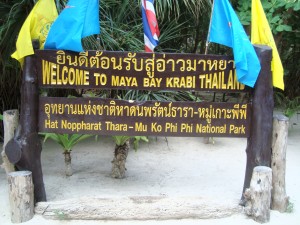 Choosing to breeze in and out of Phi Phi Don and spend the night on a boat in Maya Bay was a great decision. Sleeping under the stars in one of the most beautiful places I’ve ever been was one of my favorite nights on the trip.

We had quite a full day of activities, which included: ferrying over to Phi Phi from Ko Lanta, hiking and walking around Phi Phi Don, afternoon snorkeling off of the boat on the way to Maya Bay, watching the day trippers and other boats trickle away after the sunset, and eating a full Thai dinner and drinking a couple ‘buckets’ of the local Sangsom rum and coke while getting to know our fellow passengers on Maya Beach. All of this was followed by midnight snorkeling among the bioluminescent fish in the bay. We had so much fun and it was so beautiful that it seemed surreal.

We stayed up really late hanging out with some great folks from all over, including England, Ireland, France, Argentina, Belgium, and surprisingly, only one other American. Even after such a packed day, I was so full of adrenaline and awe at everything around us that I could barely sleep. Not only was sleeping under the stars pretty incredible, lightning in the distance made for such a beautiful sky that I didn’t want to close my eyes and miss a moment of it. I hope I never forget how I felt lying under the brilliant sky that night.

John and I were especially struck by how much better this overnight boat trip was than the one we took to Ha Long Bay in Vietnam. The Ha Long Bay boat was much nicer, with private cabins and fancy-looking (but not tasting) 5 course meals. The Maya Bay boat was pretty basic, with a tiny bathroom, and buffet style food. A foam mat and pillow, wherever you threw them down, counted as your accommodation for the night. The difference was actually pretty stark (and the Ha Long Bay price almost double), but the Maya Bay folks did something right because it was by far the better trip. I thought the forced ambiance of luxury on the Ha Long bay trip was stifling, whereas the casual, no frills atmosphere that the folks running the Maya Bay trip created was conducive to connecting with folks and having an adventure. We’d highly recommend the Maya Bay boat trip for anyone going to Ko Phi Phi. 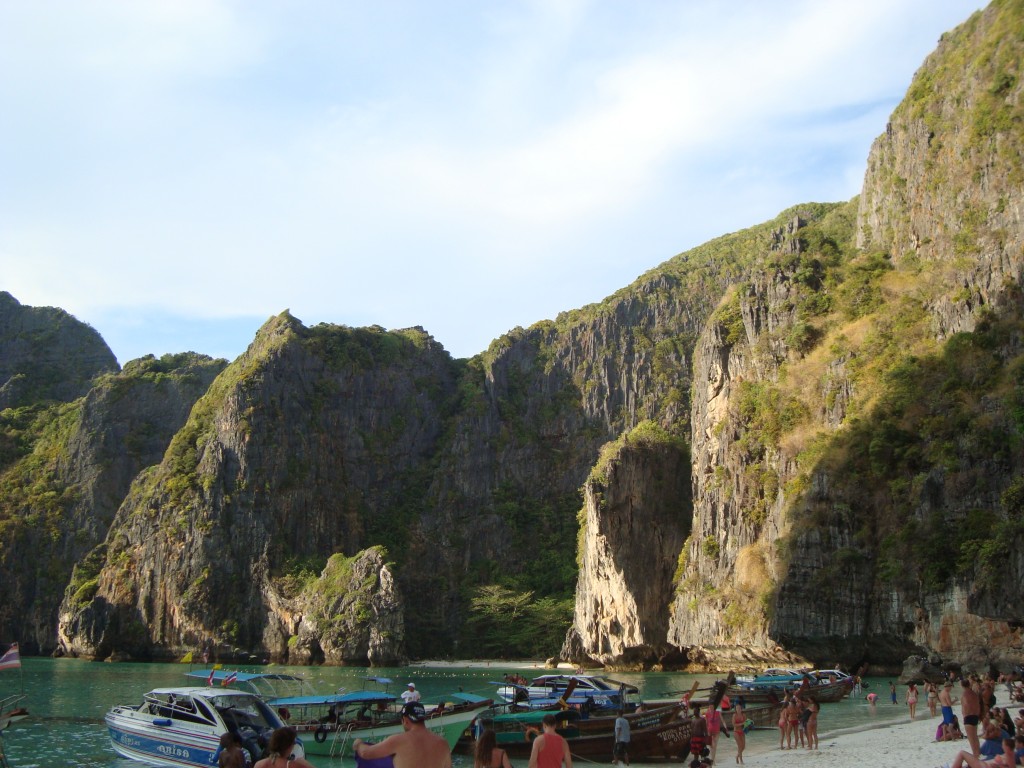 View of The Beach as the sun sets, while there are still hundreds of tourists on it … 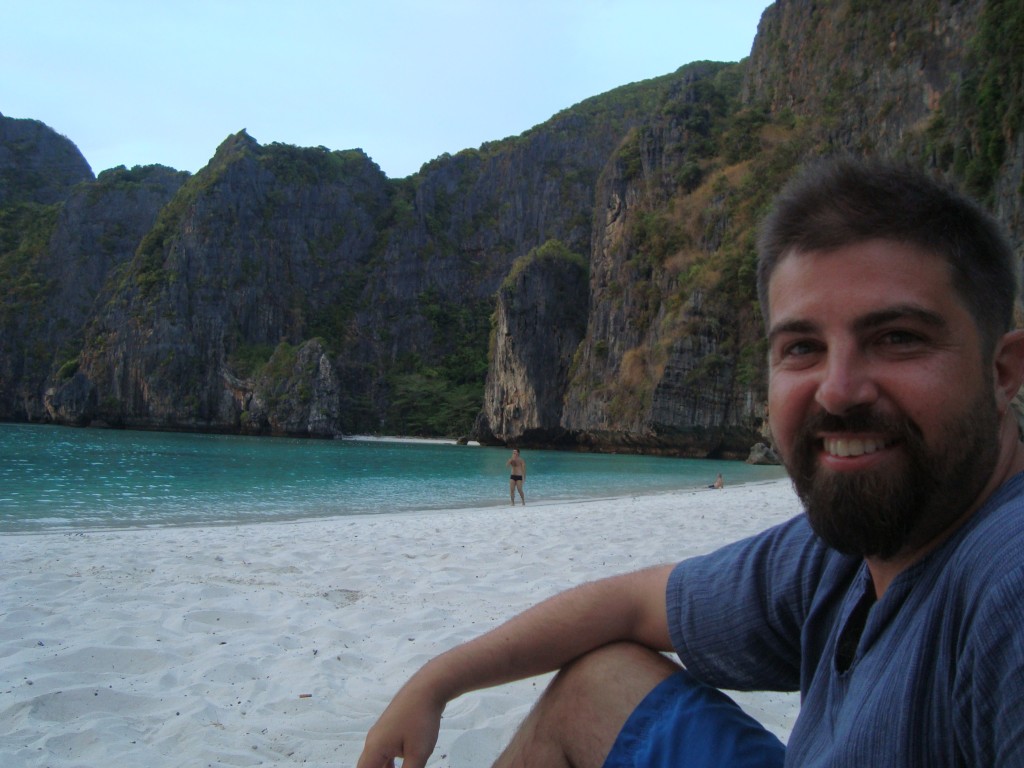 And after everyone left and only our boat remained. So much nicer when it was empty. 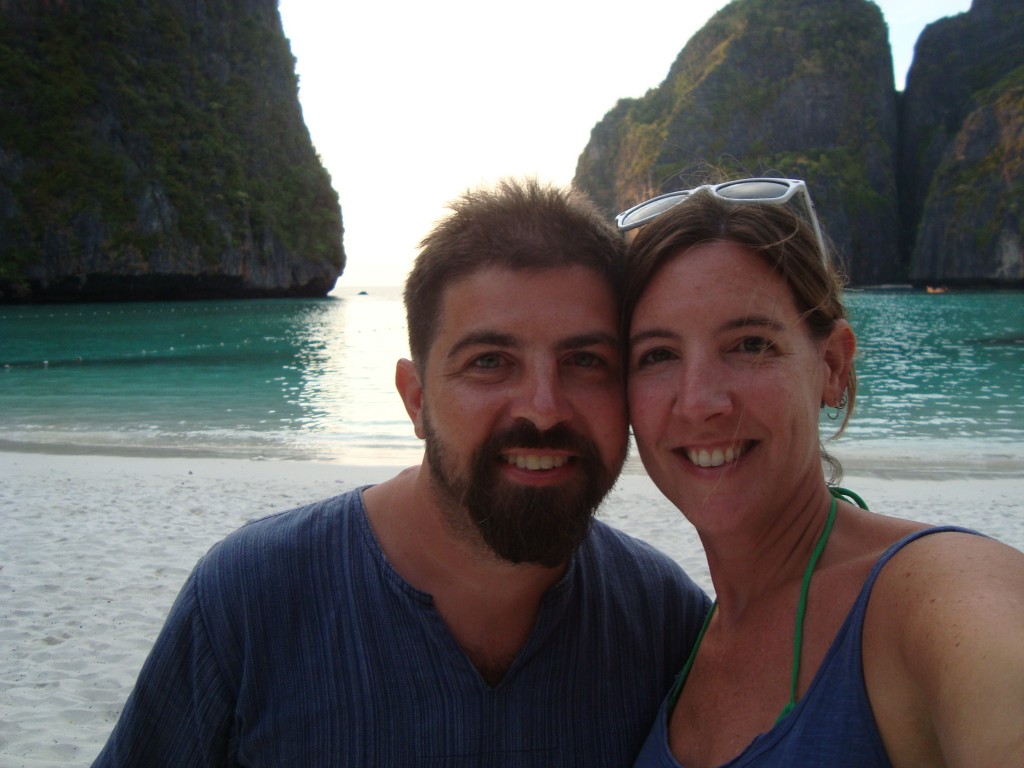 Hanging out at sunset. 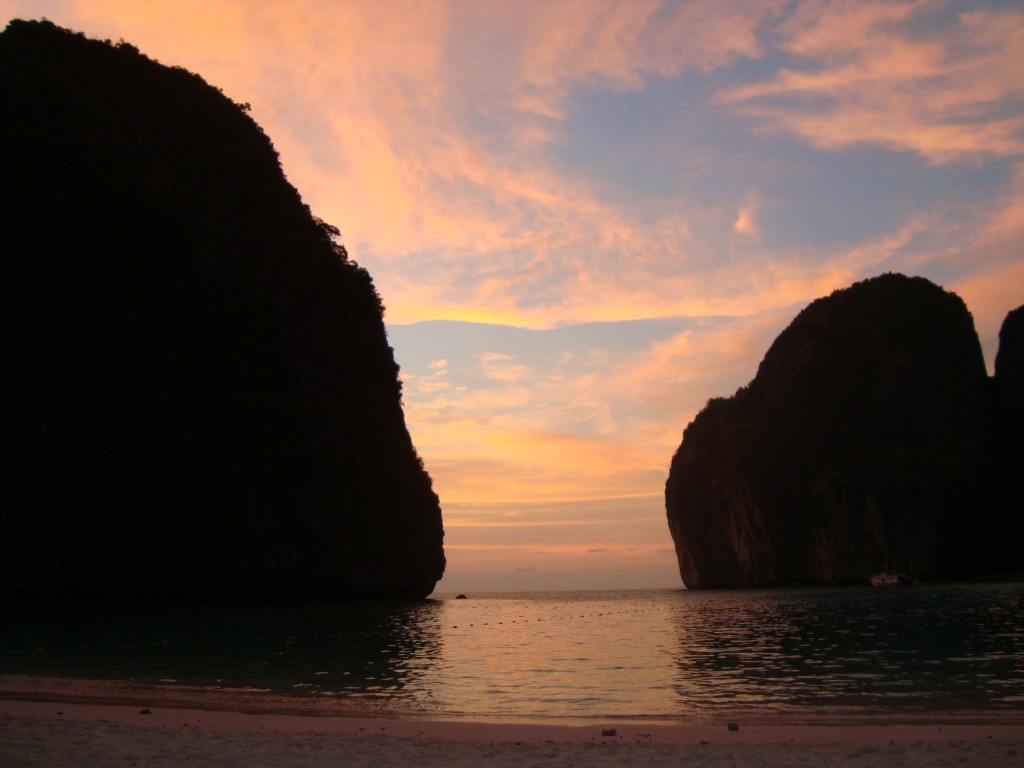 Waking up on the boat, with The Beach in the background 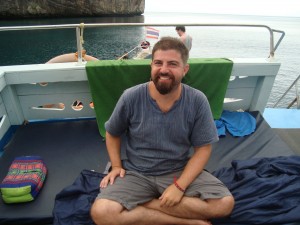 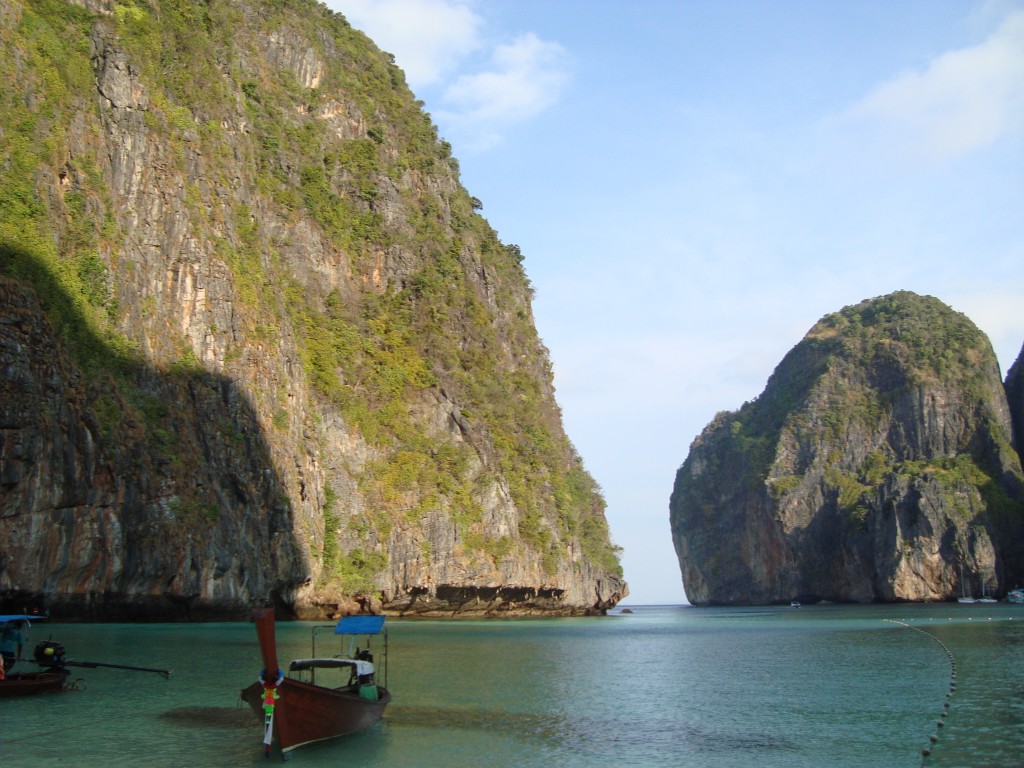 Watching the sun rise over the bay 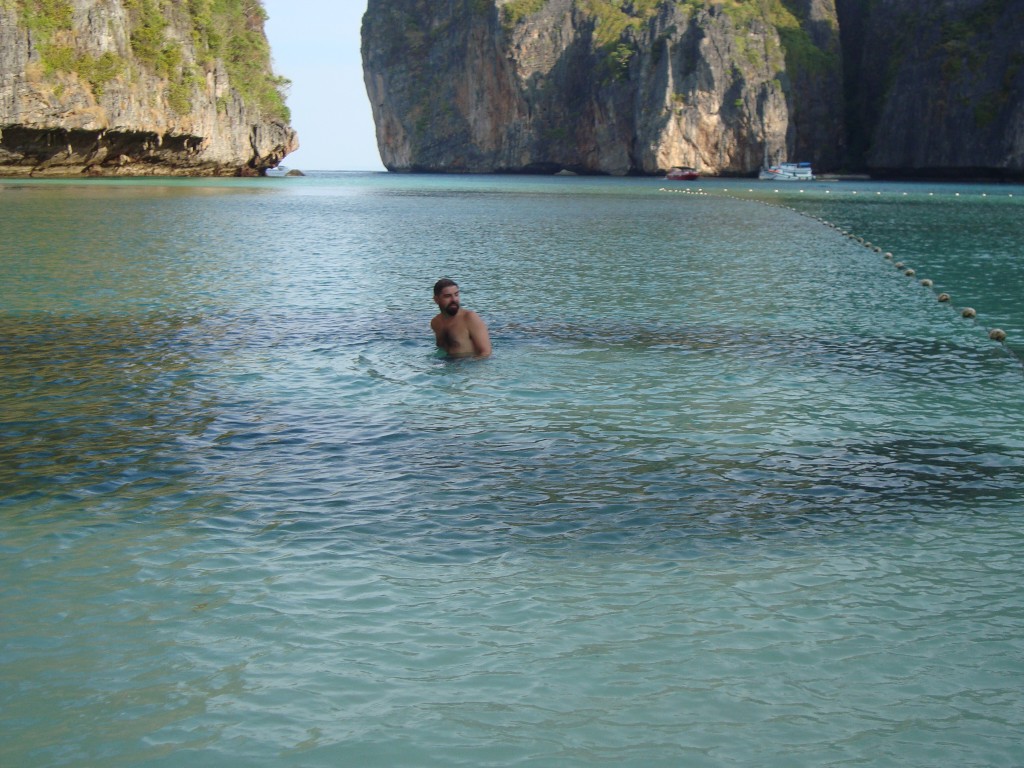 John was surrounded by thousands of tiny black (harmless) fish while taking one last swim in Maya Bay. 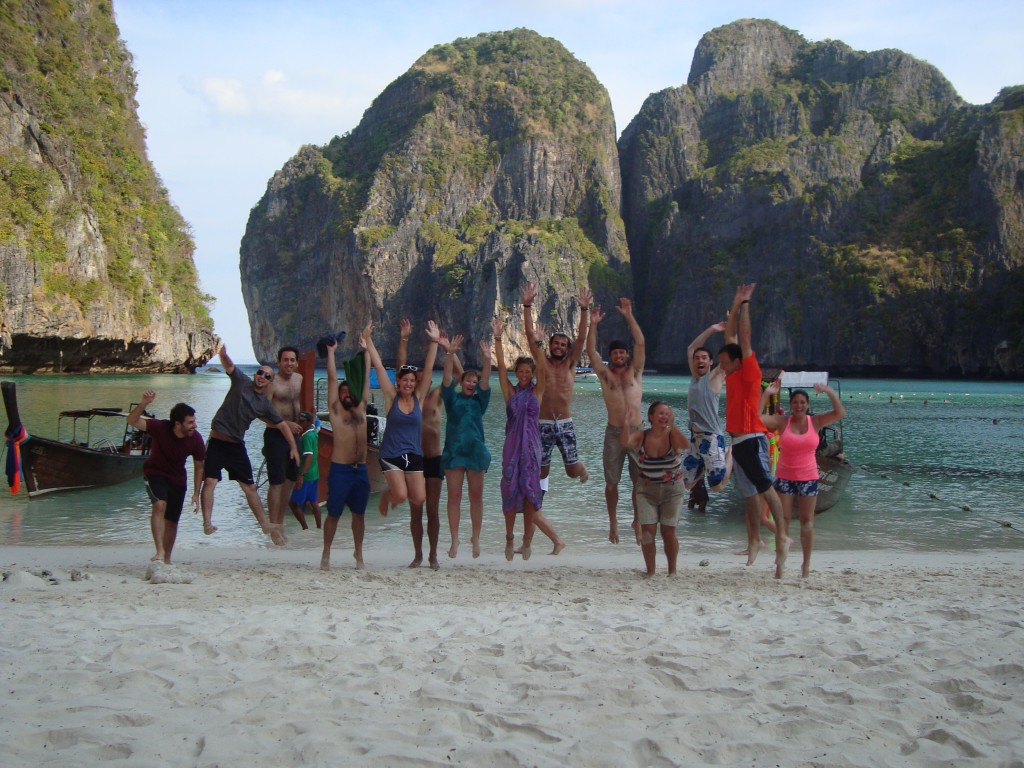 Posing with the rest of our group

3 thoughts on “Paradise Found: Sleeping on a Boat in Maya Bay”