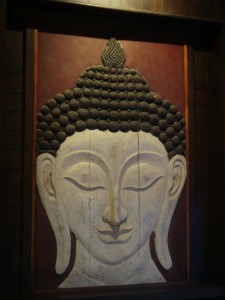 I really liked this Buddha painting in a nearby hotel

As the end of our trip neared, we were excited to get to one place and spend the rest of our time there. We chose to go back to Ko Pha Ngan in the Gulf of Thailand because it had the best mix of things we were looking for: lower hotel prices, a laid back and less populated/developed atmosphere, nice beaches, etc. We lucked out by finding a hotel that was basically on the side of a hill so while it had a great pool and restaurant down near the beach, we got a good deal on a very nice room because it was a pretty good hike up the hill. This also meant it had amazing views of the cove we were in. 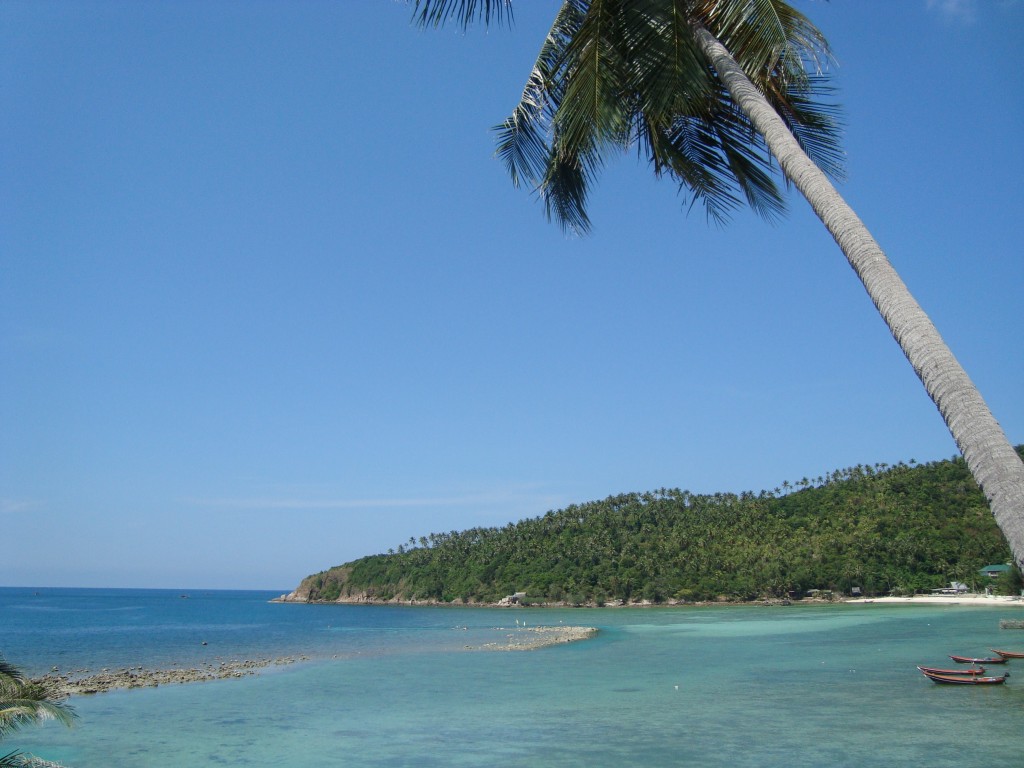 View from our beach

View from our balcony at sunrise.

It was one of the best rooms we’d had on the trip, with a very large balcony that we slowly took over for what turned into 3 weeks. Our daily routine included eating, reading, getting in some internet time in the restaurant (no access up in our room), hanging out at the pool, and walking across the beach to the nearest store to buy the 6 liter bottles of water we went through at an alarming pace. This way we could refill our 1 liter bottles and use fewer of them. Sadly, Thailand was the only country where these larger bottles were an option. 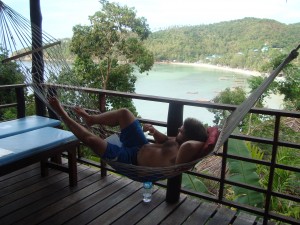 During these final weeks we also fretted over the decision of whether or not to extend our trip. But when we weighed the costs versus the benefits, it was almost foregone conclusion. We stayed longer. And even with the small issue of overstaying our visas and having to pay a modest fee on the way out, it was well worth it. Lest anyone think we were cavalier about visa issues, we weren’t. We went to great lengths to try to extend our visas the proper way, but it didn’t work out. So, before we overstayed them, we did tons of research and talked to some people, and were pretty sure we could just pay a fine at the airport. It all worked out ok.

Having a ‘bucket’ and watching the crowd grow at the beach. Then we got out of there before it got too crazy.

After settling in to our home for three weeks (the longest we stayed in one place on the trip), we left the beach a couple times for some final adventures. We happened to be there during one of the infamous ‘full moon parties‘ that draws over 20,000 people to Ko Pha Ngan every month. We strategically stayed on the opposite side of the island from this party beach.

We also rented motorbikes, did some more exploring and hiking, and took an intro to scuba diving “class” (which in Thailand meant a 15 minute prep class before you donned the heavy gear and jumped overboard in the middle of the ocean!). 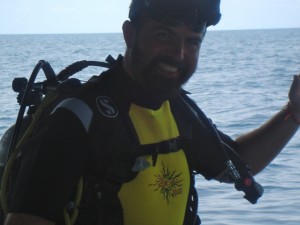 I had a strong aversion to staying underwater for too long and was on the verge of panicking because I feared I wouldn’t get enough air. I forced myself to give it a try and descend about 10 feet to see how it felt, and then I was done. Contrary to my anxiety-ridden state, John was calm and collected (at least on the outside). He liked it more than I did and completed two 12 meter dives, but I don’t think either of us will be itching to go again anytime soon. We were very glad we tried it given the opportunity. 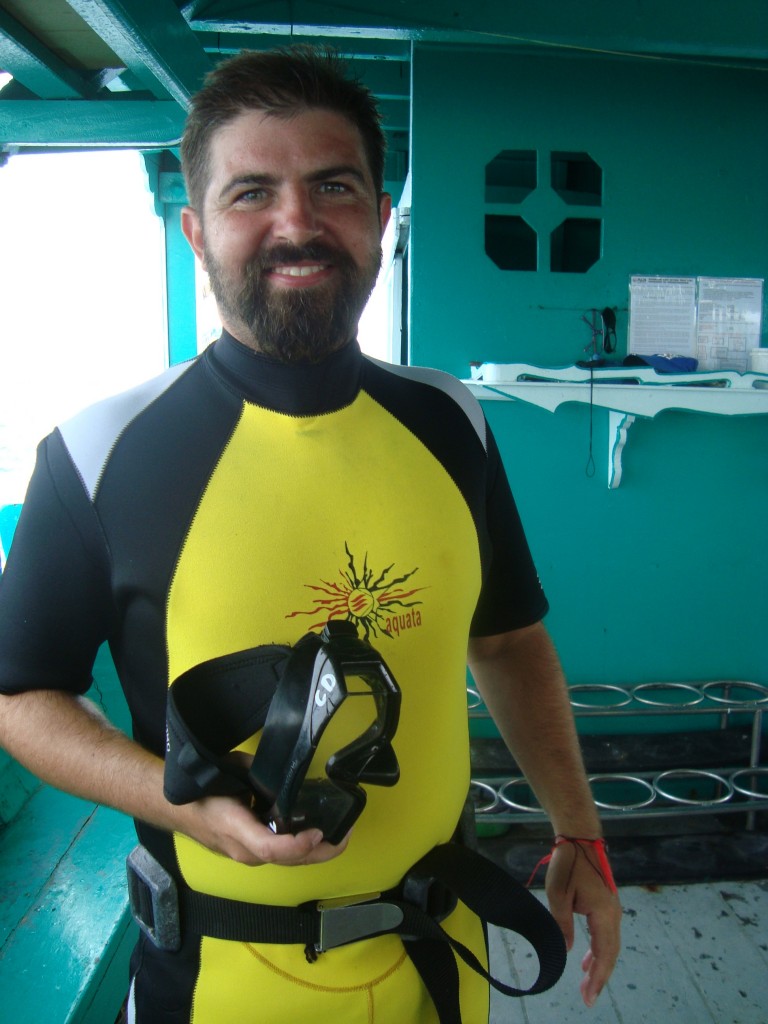 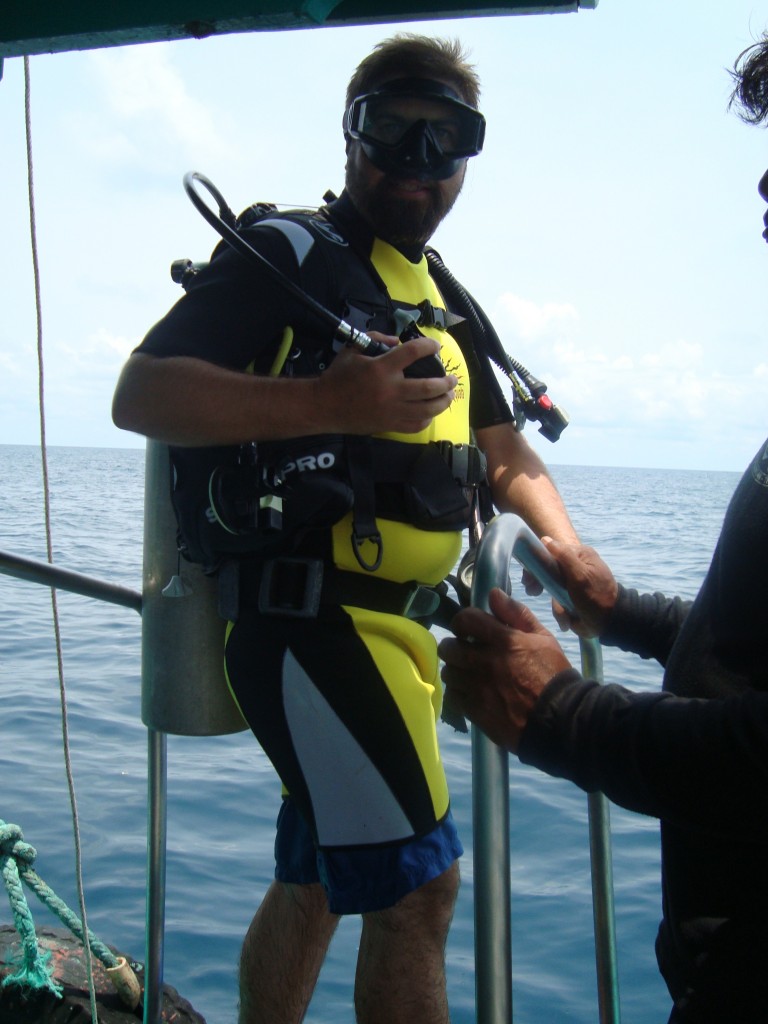 View from the top of the trail to Bottle Beach, at about 850 feet above sea level. It was intense because the hike was steep for our non-hiking shoes, and we also went at the hottest time of the day. 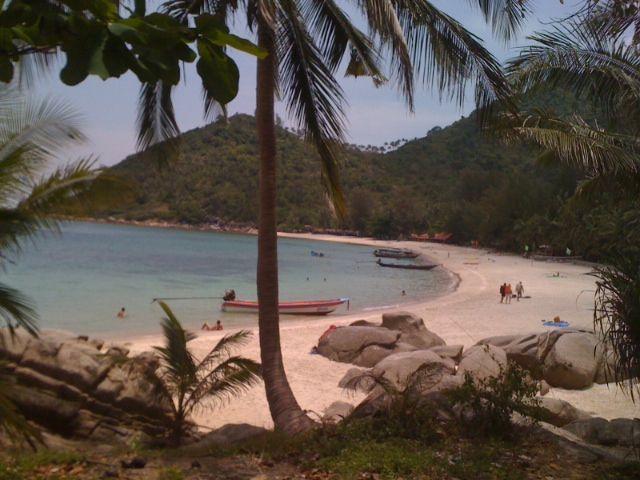 But this was the end of the hike, so we practically ran out of the jungle to the beach to go for a swim. The only way back to our motor bikes at the beginning of the trail was to hike back, or take a boat. We had set out to hike both ways, but by the end we opted for a boat ride. 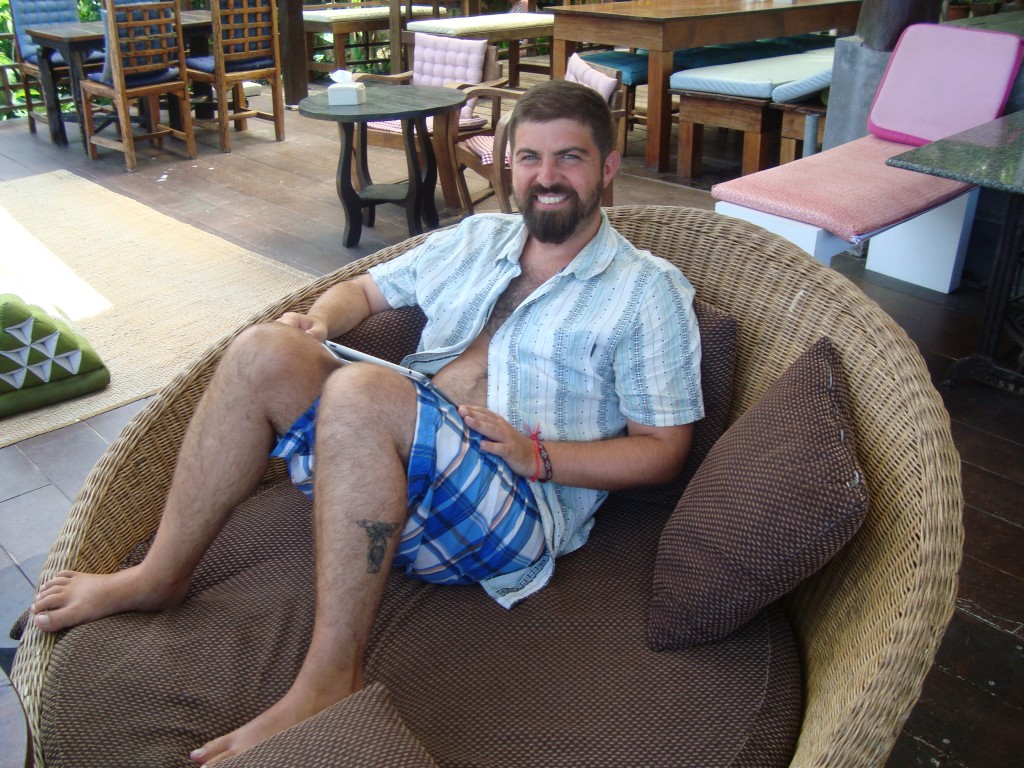 Back at the resort, we spent a lot of time in these papasan chairs. 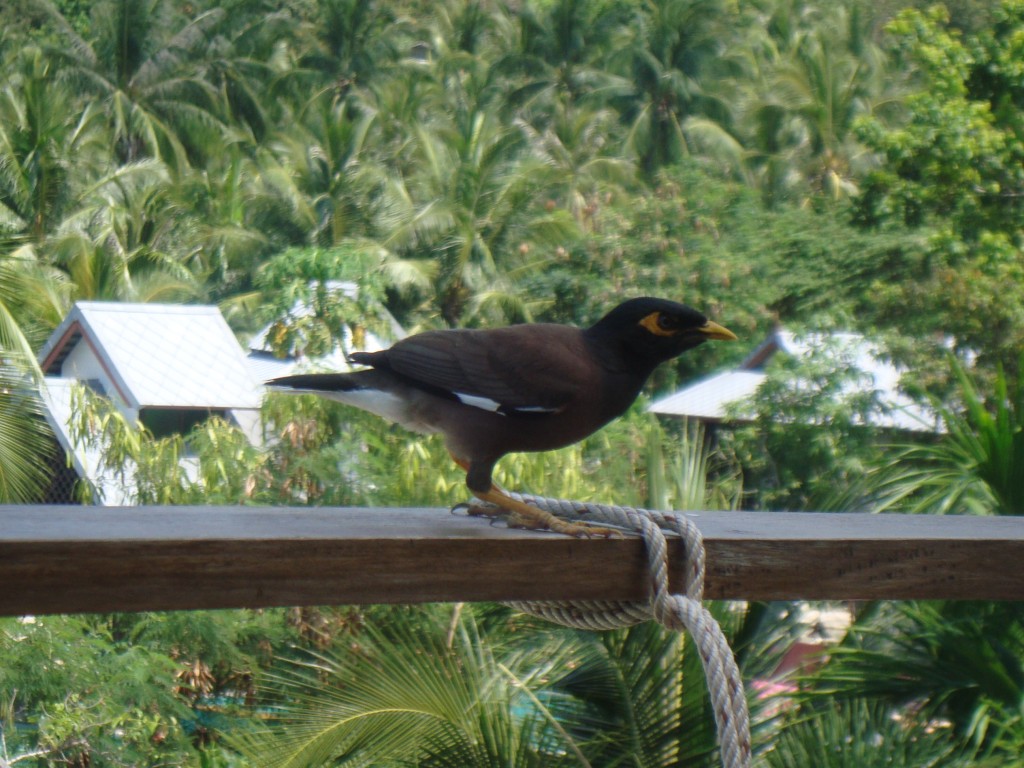 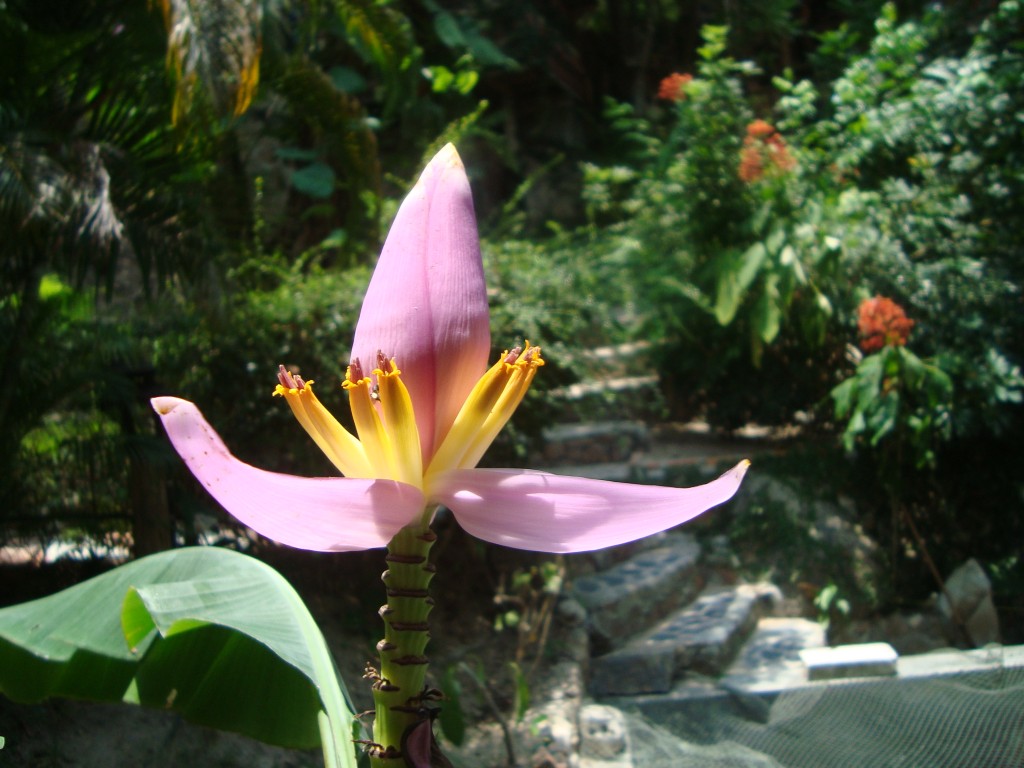 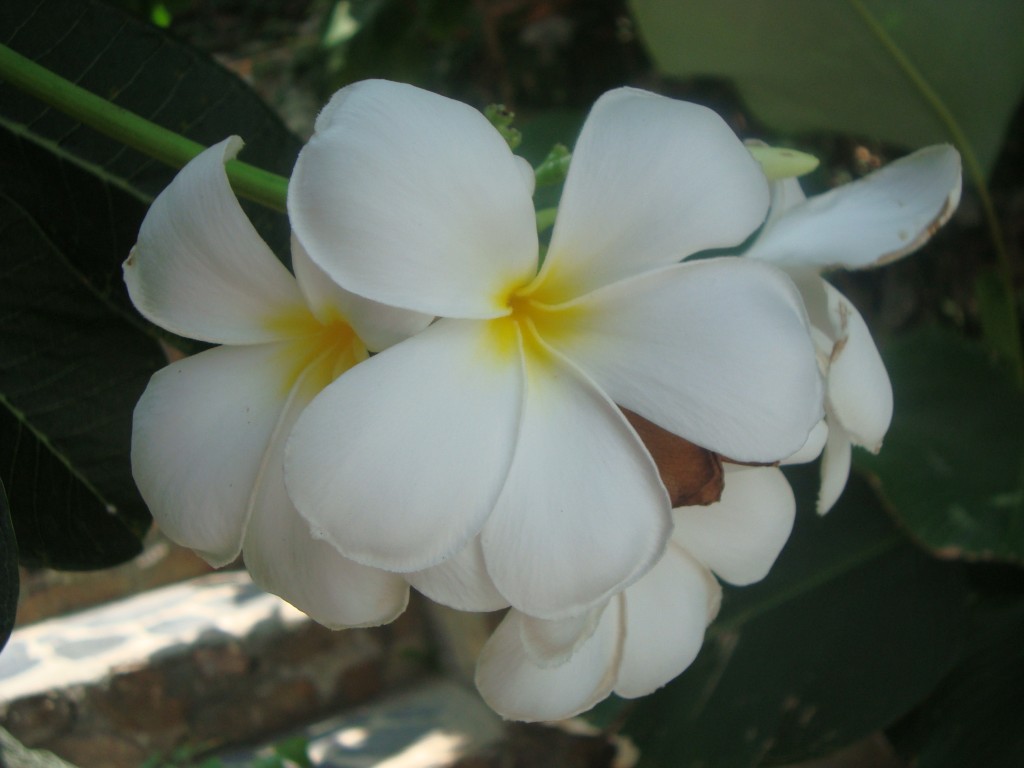 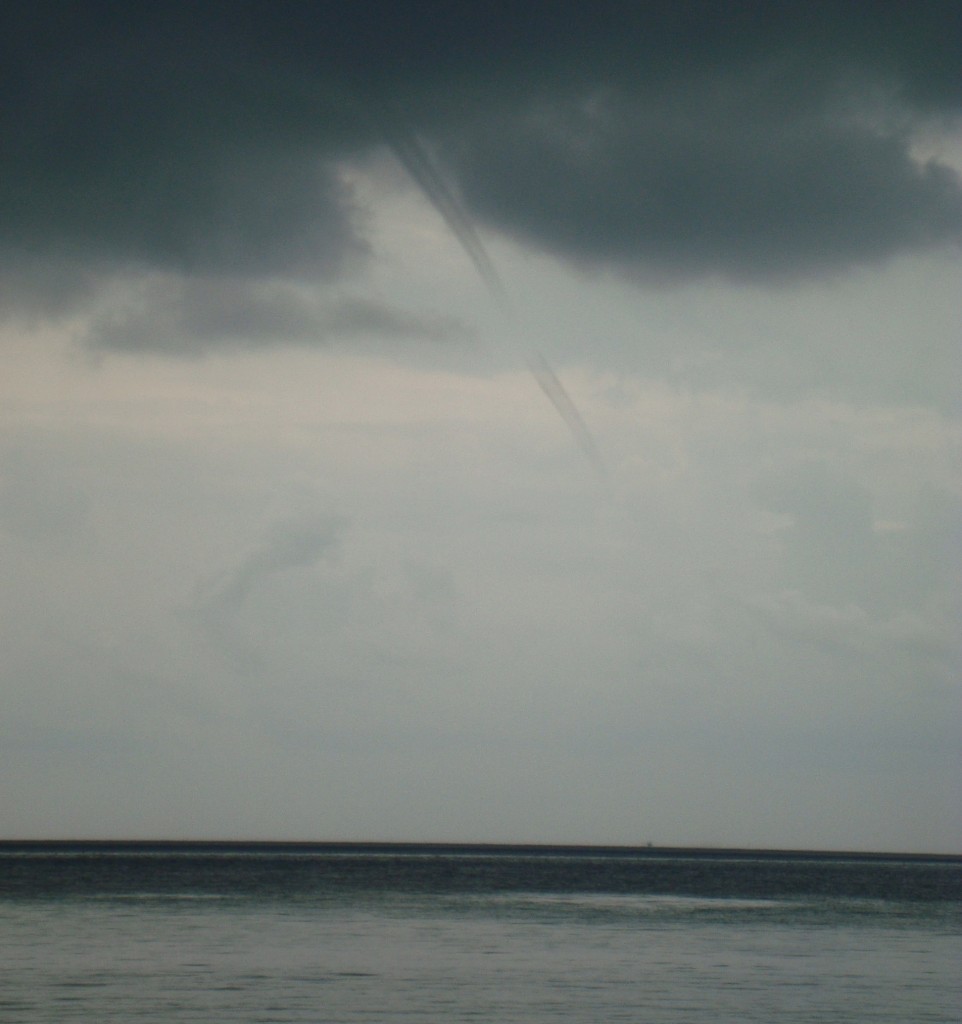 On our last day at the beach, this tornado-like water spout showed up. Luckily the clouds blew over by the afternoon.

Last day at the beach. So many mixed feelings. It was the most blissful and relaxed we’ve ever felt so we didn’t want to leave, but we were also excited to come home and see friends and family. But I guess if I’m being honest, we likely would’ve stayed a lot longer if we hadn’t bought a return ticket at the beginning of the trip!

7 thoughts on “Life on the Beach”